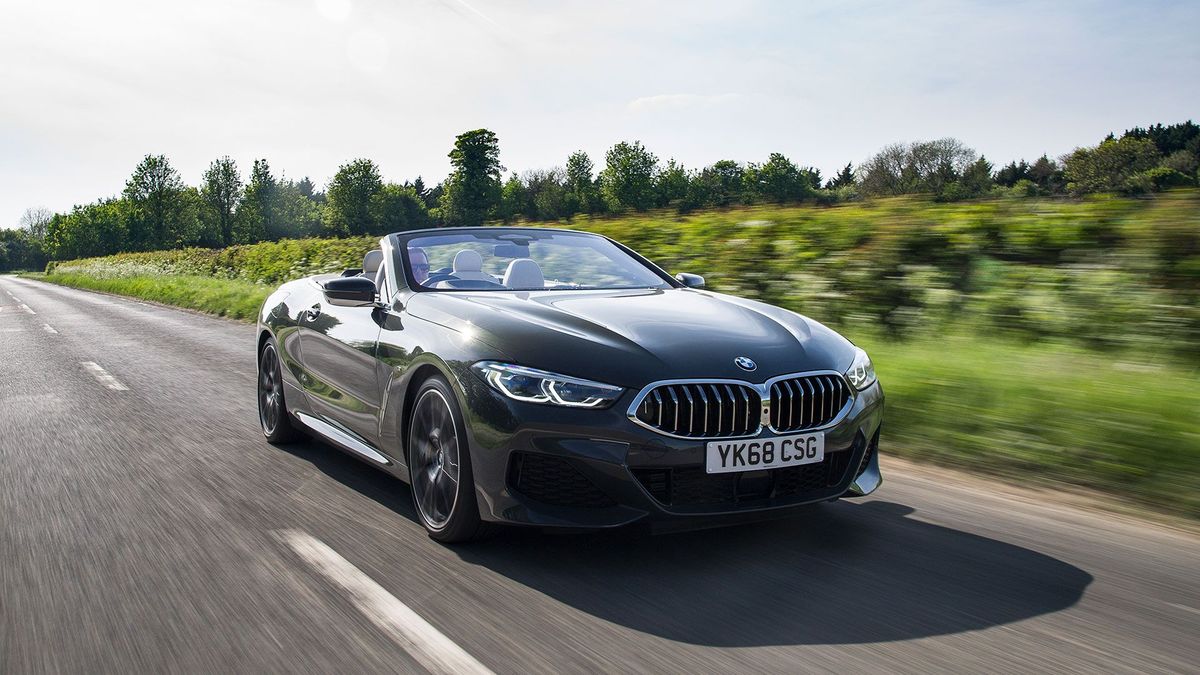 The BMW 8 Series Convertible may well be slightly heavier and less practical than its Coupe brother but if you consider it as opulent transport for two and plenty of luggage for a long trip away it’s a fine choice. BMW considers it a sports car and rival to the likes of the Porsche 911 Cabriolet but it’s really a more luxurious tourer in the mould of the Mercedes-Benz SL in this guise, albeit a blisteringly fast one. 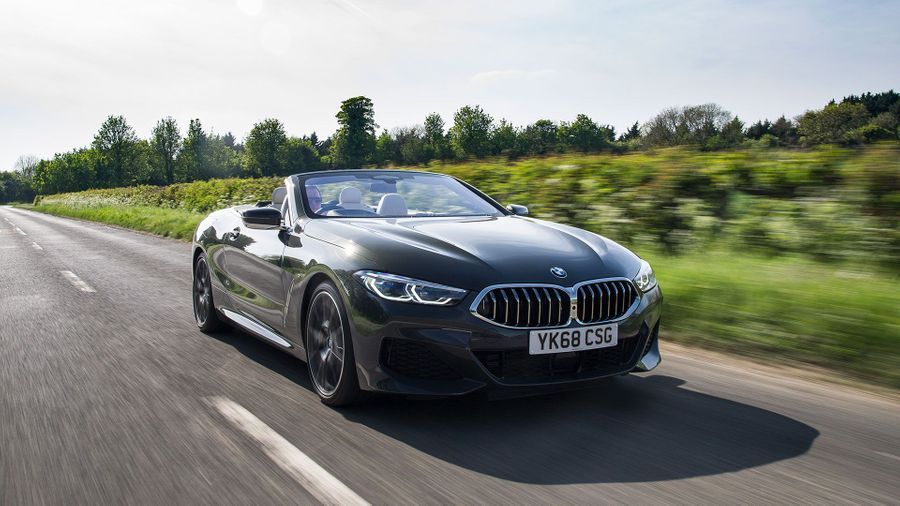 Like all of the BMW 8 Series Convertible’s rivals, it’s an expensive car to buy and run. Nonetheless, few competitors are available with a diesel engine so that will certainly keep costs down for those that cover larger mileages, though not everyone will like the idea of running one as a convertible. Still, at least there’s the choice. On top of that, the resale values are expected to be strong for this car, reducing the cost of depreciation. However, that’s offset by expensive consumables, tax and insurance. In fairness, all cars in this elevated bracket are in the same boat, and buyers that can afford this car will be prepared for the running costs. Fixed-price servicing is offered by BMW too. 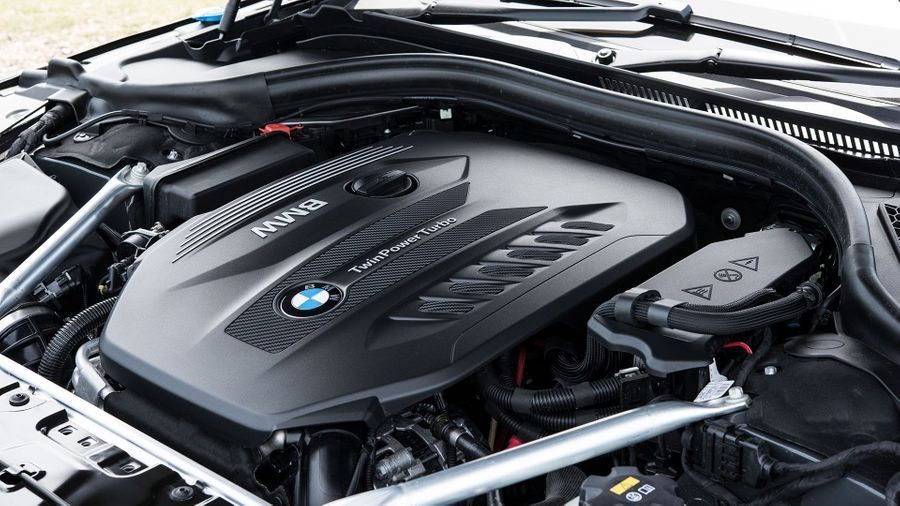 There isn’t sufficient data on the reliability of the current BMW 8 Series to make a call on it, but for reference, its predecessor, the 6 Series, fared acceptably well when compared with cars from other premium marques. However, it’s not all good news. BMW came dead last in the 2019 JD Power Vehicle Dependability Study, just below Audi and some way below Mercedes-Benz, which is concerning. Like all BMWs, the 8 Series comes with a three-year, unlimited mileage warranty that includes BMW Emergency Service. 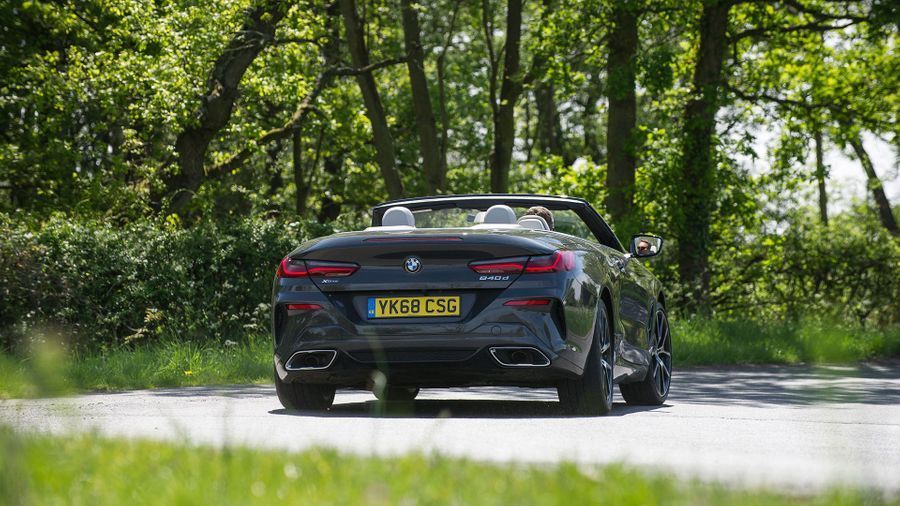 BMW has a strong track record for safety and the Convertible comes with eight airbags in total for protection. Buyers will also be reassured to know that there’s a rollover protection system hidden behind the back seats. If the car detects a chance it will turn over in a crash, a pyrotechnic charge releases two high-strength roll bars that extend above the passengers’ heads. The windscreen surround has been strengthened for the same reason. As on most BMWs (and its premium rivals), the 8 Series Convertible comes with two distinct levels of active driver assistance safety, the most impressive of which is, sadly, on the options list. There are Isofix child seat mounting points in both rear seats.

How comfortable is the BMW 8 Series 4/5 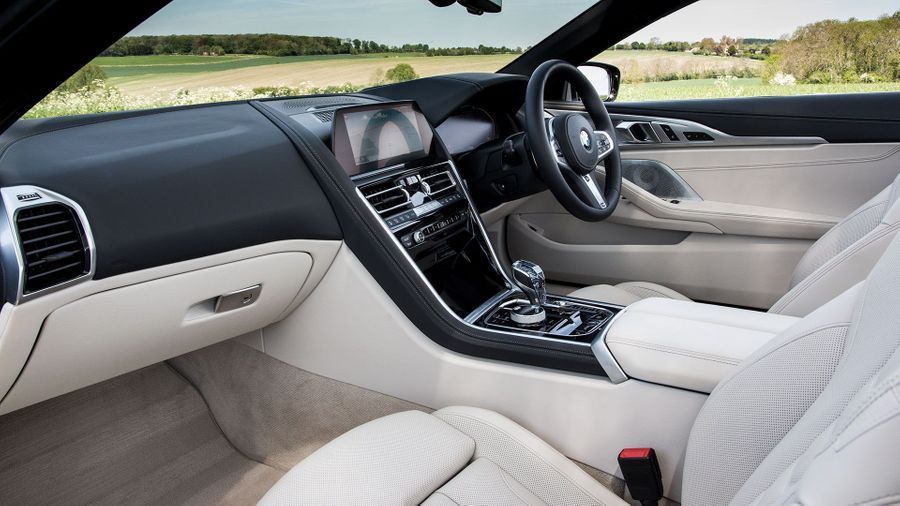 The interior of the BMW 8 Series Convertible is of very high quality, with gorgeous leather upholstery (using a sun-reflecting coating) and comfortable sports seats. There’s a high-tech theme, too, with a large and partially-customisable screen instead of traditional instruments in front of the driver, which looks flash but can be hard to read. That’s complemented by a big infotainment touchscreen in the middle of the car. The way it all works is impressively intuitive, and if you can’t even be bothered to do that, it’s also backed up by BMW’s excellent voice-control functionality.

Up front in the BMW 8 Series Convertible, there’s just as much space as in the Coupe version , but rear passengers don’t fare anywhere near as well. The seat backs are more upright and there’s less shoulder room than in the Coupe. If the rear seats are not in use, the standard wind deflector can be put in place. This, along with the four side windows raised, reduces wind buffeting in the front seats, but even so, you’re still not as well isolated as you are in some rival convertibles.

Despite a significant weight gain over the 8 Series Coupe the Convertible is an accomplished creation, helped by the option to tweak driving settings at the touch of a button. This allows the driver to choose a comfort setting for the suspension when required, though the ride quality is always on the firm side. Indeed, the Sport Plus mode in the M850i version is particularly aggressive, making the suspension firmer again and allowing faster cornering speeds. There is the option of an even cleverer ‘Professional’ version of the adaptive suspension for the M850i, and this makes for by far the best-driving version of the 8 Series. The handling is just as sharp and alert, but that’s also combined with a vastly improved – and impressively comfortable – ride.

Four-wheel steering is included on the M850i and 840d and allows the Convertible to feel stable at high speed and agile through slower corners. It also makes parking easier by reducing the turning circle. 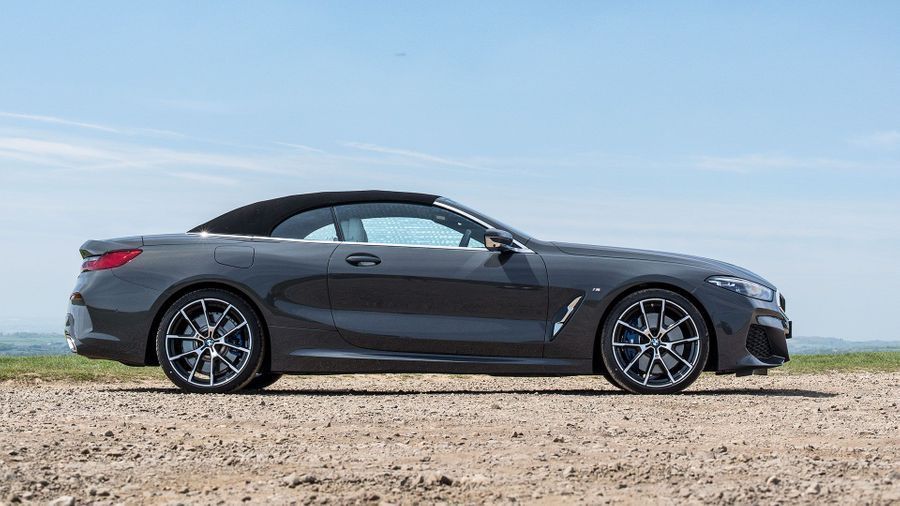 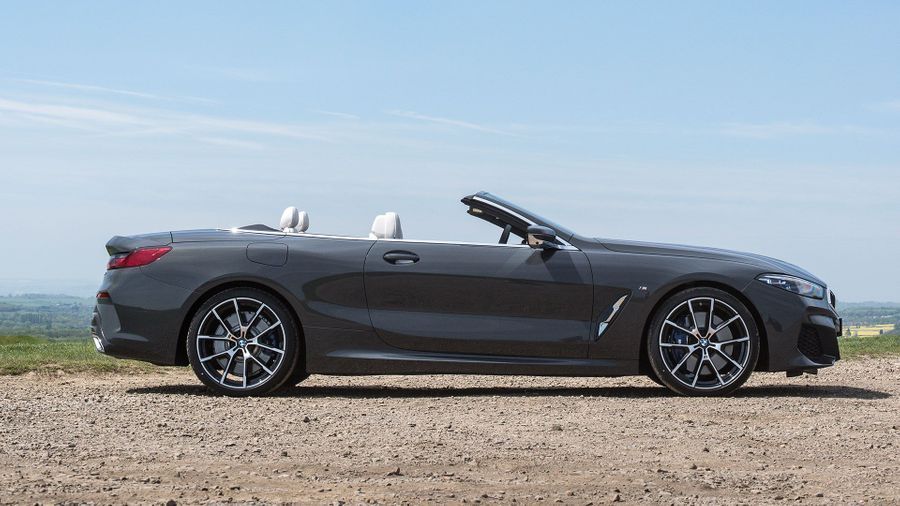 The big talking point for the 8 Series Convertible is, of course, the folding roof. It’s a multi-layer fabric design that folds slickly away at the touch of a button (one in the car or one on the key fob) in 15 seconds. And that can be done at speeds of up to 31mph.

There are subtle differences in style between the entry-level M Sport versions and the standalone M850i variant, though all ride on stylish 20-inch alloy wheels as standard. Buyers can upgrade the black soft top to include a silver fleck in its finish, but the number of paint colours offered is disappointingly low

Buyers of the 8 Series Convertible won’t find it lacking in equipment as standard. The automatic roof and wind deflector are included across the range, of course, but so too is soft leather upholstery and an excellent neck-warming system built into the front headrests. There’s a large suite of connected services as standard, as part of the impressive technology offering, including a sophisticated automated parking function. Those that like to drop the roof whenever it’s not raining should consider paying extra for the Premium Package, which includes heating for the steering wheel, the armrests in the doors and on the centre console. BMW offers many different alloy wheel designs to choose from. 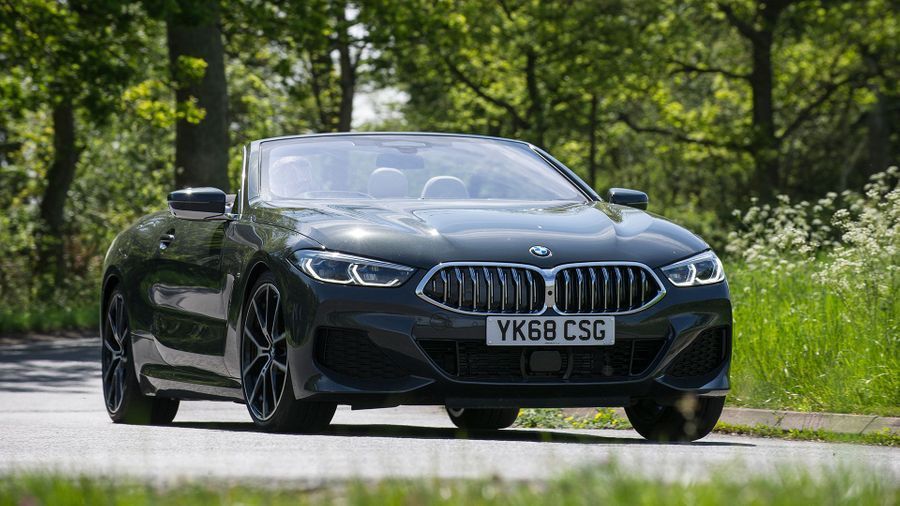 Until the inevitable M8 model arrives, the M850i xDrive Convertible tops the two-model line-up. It’s powered by an exceptionally powerful twin-turbocharged V8 petrol engine, producing 530 horsepower. It starts up with an attention-grabbing rumble, and can roar like a thoroughbred sports car engine, but it also fades into quietness when you’re just cruising along. Its considerable performance is only ever an ankle flex away, though.

Within the constraints of the public road, however, the 840d xDrive is just as impressive. Its diesel engine sounds sporty in its own way and, though it only produces 320 horsepower, it punches from low revs, so you never need to push it hard. Both engines are paired with BMW’s excellent eight-speed automatic gearbox, which can be operated in various modes, including fully manual. Meanwhile the ‘xDrive’ four-wheel-drive system standard on the M850i and 840d complements the huge reserves of grip from the high-performance tyres to make it easy for anyone to exploit the performance on tap safely. 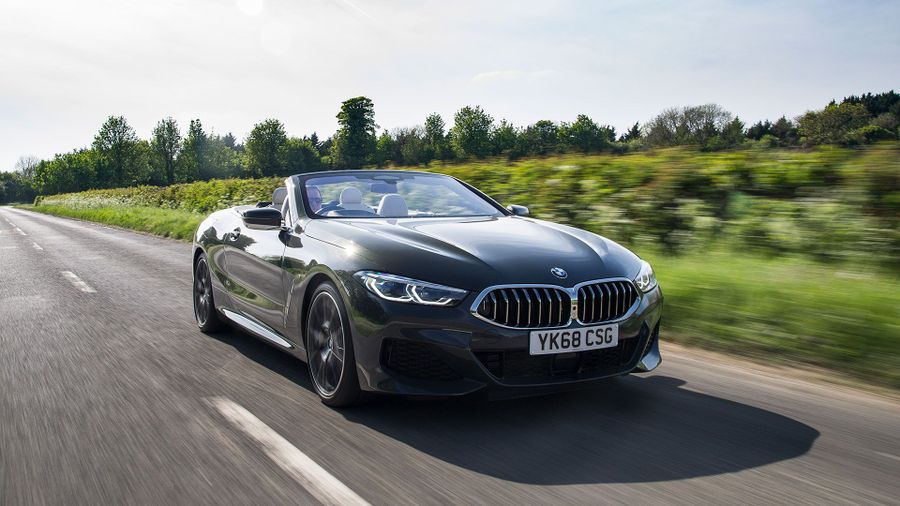