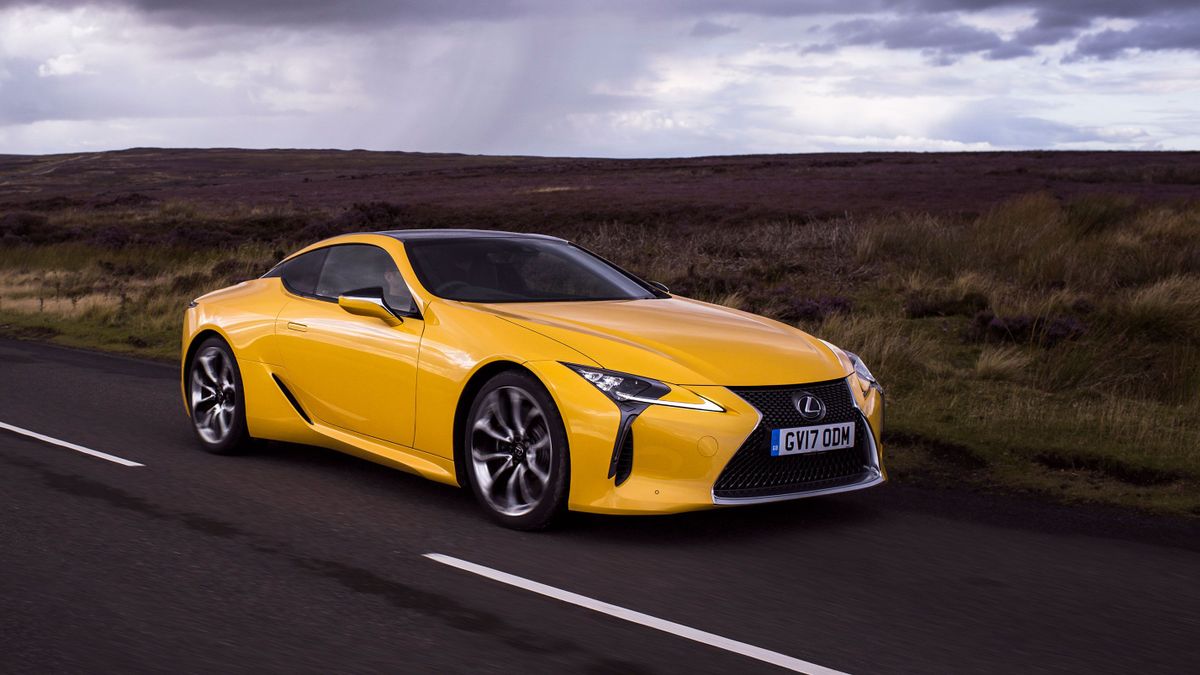 The LC is an eye-catching, beautifully made coupe that has different characters depending on which version you go for. The hybrid is a great cruiser and ticks plenty of eco boxes, but it’s not particularly engaging to drive. The V8 version, though, is a really solid touring sports car, with great performance and handling.

Pick of the range
LC 500 Sport+
If you want the most fun, get the car with all the toys.
Most economical
LC 500h Luxury
A V6 with electric help has an official fuel economy of around 44mpg.
Best avoided
LC 500h Sport+
The hybrid isn’t sporty enough to warrant extra driving tech. 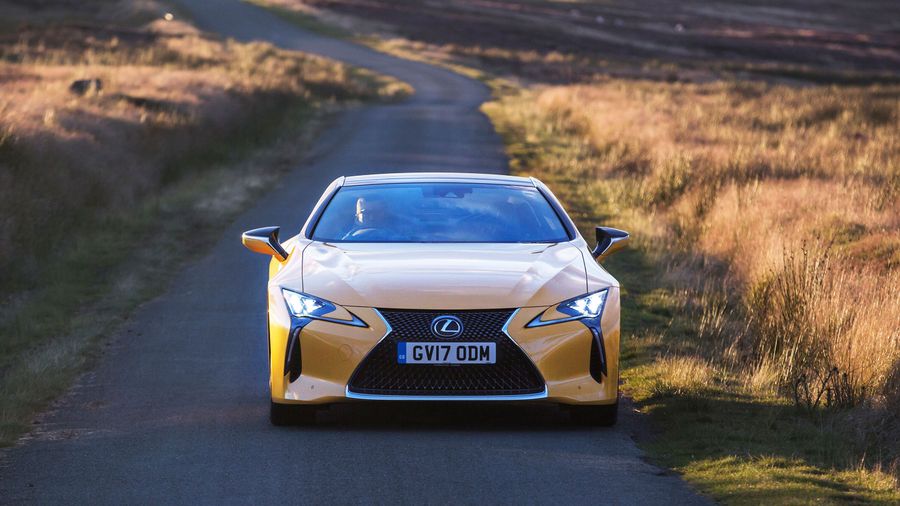 The styling of the LC is one of its big selling points, and represents Lexus waving a big flag about the look of its future cars. Safe is out, and outlandish is here to stay. Some will hate it, but others will love that the LC looks very different to anything else out there. Whatever your opinion, it certainly attracts attention. Three trim levels are available; Luxury, Sport and Sport+. Luxury comes with 20-inch alloy wheels, a glass roof and LED front and rear lights, while the Sport model adds a carbon fibre roof and 21-inch wheels, and the Sport+ model has a retractable rear spoiler. 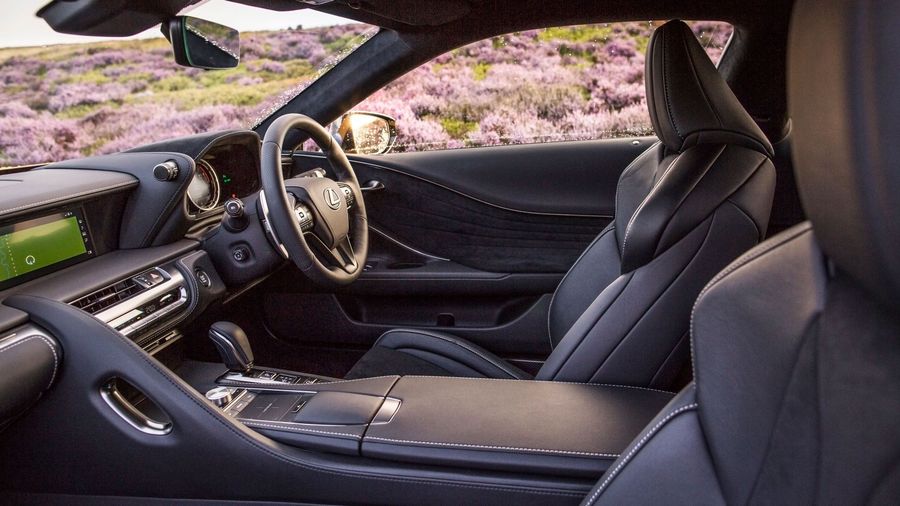 Lexus has a deserved reputation for great quality interiors, and the LC upholds it in fine style. The materials used, including leather and faux-suede, are of a high quality, and everything is screwed together superbly. The driving position is suitably low for a car with sporting intent, with the driver’s hips almost on the floor. We’ve only tried Sport and Sport+ models so far, which come with upgraded sports seats that are both comfortable and supportive for more enthusiastic cornering. The only major fly in the ointment is the infotainment system, which is controlled by a trackpad in between the front seats. It's very fiddly to use, not to mention distracting when you're driving. 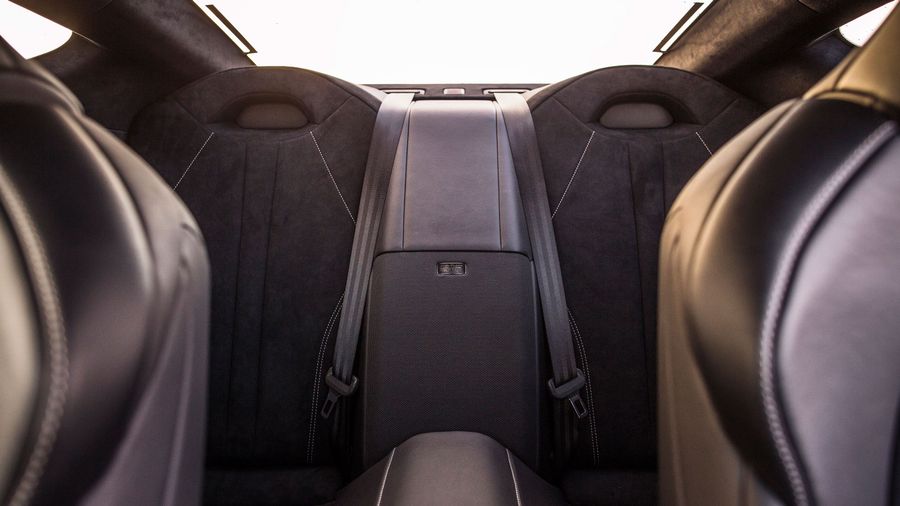 The LC is pitched as a grand tourer, meaning it should be able to cover continents with ease and have enough space inside for associated supplies. It just about fulfils that brief, with plenty of space up front, but the two rear seats are really for children or bags only. The boot will just about swallow a golf bag, but if you’ve got several big suitcases for a week away, you’ll struggle. Up front, there are a couple of cupholders and a storage space under the armrest, but annoyingly, they're a bit shallow. 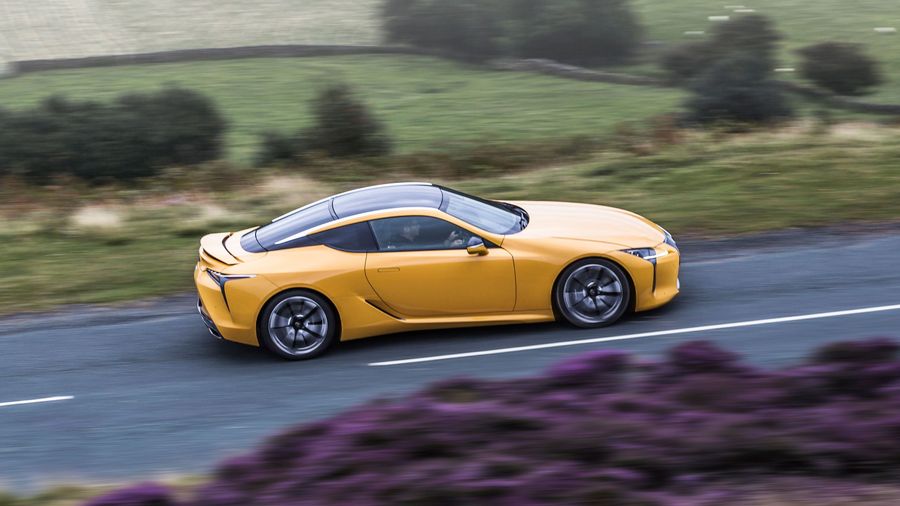 As a grand tourer, the LC needs to be comfy enough to make long journeys a pleasure. While the car stays reasonably comfortable most of the time, the ride quality is not quite as smooth as with rivals like the BMW 6 Series or Porsche Panamera. Even on relatively smooth surfaces, there’s more chatter and fidgeting coming up through the car than you might expect. On the other hand, the handling is really impressive for a car that isn’t exactly a lightweight, with nicely weighted steering and solid body control through the corners. Sport+ models come as standard with Lexus’ Dynamic Handling system, which includes rear-wheel steering. The result is a sharp, nimble machine that can whip round tight corners neatly, although the front wheels will quickly protest if you try and lean on them too much into a corner. 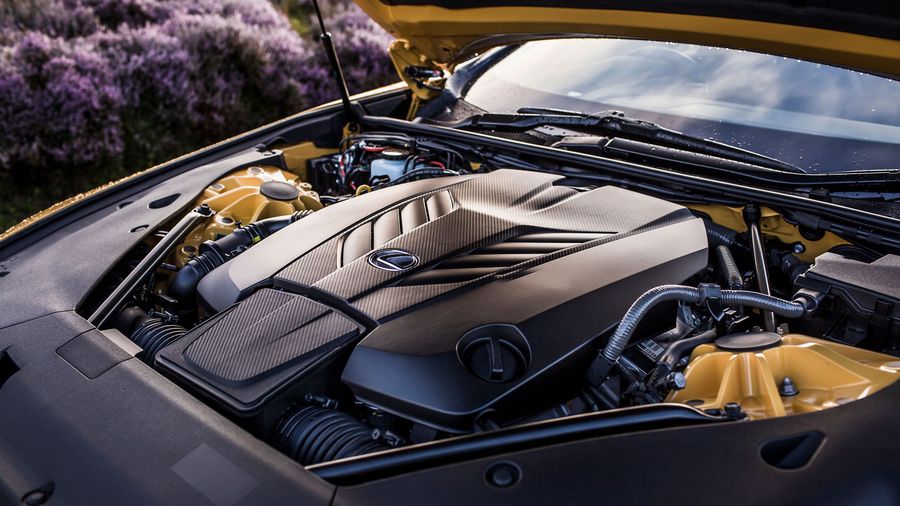 The LC’s performance varies dramatically depending on which version you choose. The LC 500h uses a hybrid system, mixing a 3.5-litre V6 with an electric motor to generate 359 horsepower, which is enough for rapid, if not scintillating progress. It’s connected to a very clever gearbox that mixes four normal gears with two electric generators to create, in effect, a ten-speed automatic gearbox. During cruising and motorway driving, it’s almost seamless. But try and push the car on fun roads, and it doesn’t make for an entertaining experience, jumping around between gears with the merest flex of your accelerator foot.

Thankfully, the story is very different in the LC 500, which houses a 5.0-litre V8 pushing out 477 horsepower. It’s a wonderful engine, with lots of torque and a great sound that’s amplified inside the cabin thanks to some acoustic engineering. The V8 also uses a ten-speed automatic gearbox, but it’s an entirely different system to the one found in the hybrid, and it works much better. Most of the grunt work is done between gears two and five, with the higher speeds reserved for cruising, and it’s very fast and smooth to respond in both automatic and manual modes.

Lexus hopes customers for the LC will be drawn from sports cars like the Porsche 911, as well as other GTs like the BMW 6 Series. Comparing a top-spec LC 500 Sport+ (which is likely to be the biggest seller) to those rivals reflects well on Lexus. It costs several grand more to buy than a BMW 650i M Sport, but thanks to strong resale values will cost about the same to run over three years. It’ll also hold its value much better than higher end coupes that customers may consider, such as the Mercedes-Benz S500 Coupe, which is much more expensive to buy.

A Porsche 911 Carrera S with auto gearbox is also slightly pricier, and although you’ll save a lot in fuel with the Porsche, the resale values of the Lexus make it cheaper to run long-term. It’s a similar story with the LC 500h, which is priced exactly the same as the V8 car. There aren’t any other hybrids of this type, and its very strong resale values mean it’s cheaper to run long-term than a BMW 640d M Sport, even though the entry-level LC 500h is several thousand pounds more expensive to buy. 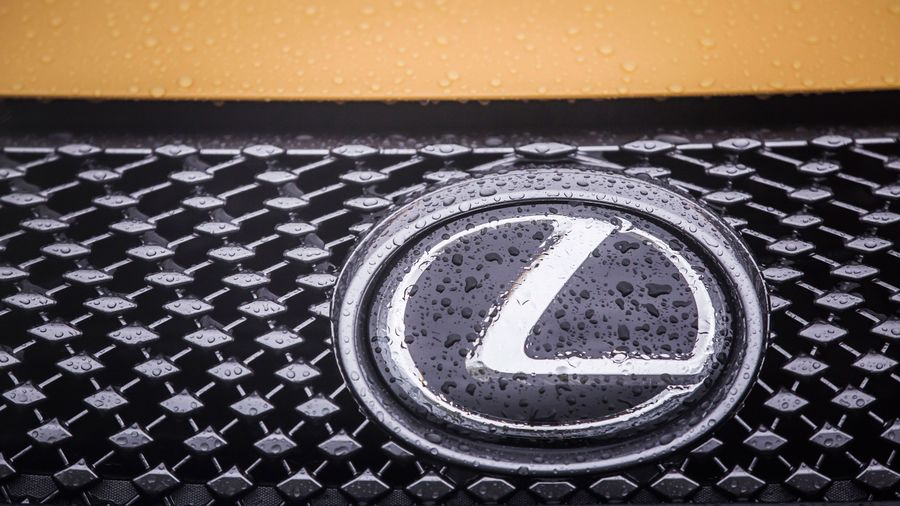 The LC is a new model for Lexus, so there’s no reliability data available yet. Lexus as a brand has an excellent reputation for reliability, though, sitting near the top of Warranty Direct’s Reliability Index, which ranks manufacturers. We’ve no reason to think the LC will change that reputation. Should anything go wrong, Lexus offers a three-year, 60,000-mile warranty on all new cars, and a five-year, 60,000-mile warranty on hybrid components and batteries.

The LC isn’t likely to get a crash test from safety organisation Euro NCAP, as it’ll be produced in such small numbers. However, Lexus has scored a maximum five-star rating on all its recent cars, so it’s fair to say the company knows how to build a safe car. Impressively, all models get a generous roster of safety equipment, including Adaptive Cruise Control, Lane Keep Assist and Lane Departure Warning systems and Automatic Emergency Braking. Eight airbags are standard, as are two Isofix child seat mounting points in the rear seats. For an extra charge, you can opt for a head-up display system, which projects driving information onto the windscreen, reducing the need to glance away from the road. 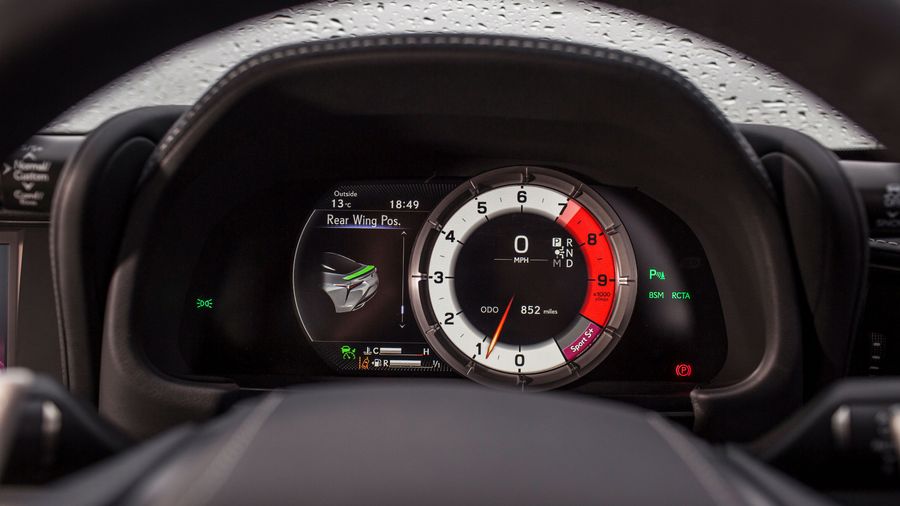 Lexus wants the LC to have a luxury image, so standard kit is plentiful. All models get a full sat-nav-equipped infotainment system, a 12-speaker Pioneer sound system and leather upholstery. Sport models get upgraded front seats and Alcantara (faux-suede) upholstery, while the Sport+ models get carbon fibre sill protectors There are only three things on the options list: a head-up display; a Mark Levinson stereo, and metallic paint. There are better luxury GT cars than the Lexus LC, but there aren’t many that offer such distinctive styling and strong running costs. There aren’t any hybrid rivals, either, and for some, that technology will be very attractive. From a driving excitement point of view, though, the V8-powered LC 500 is the one to go for. 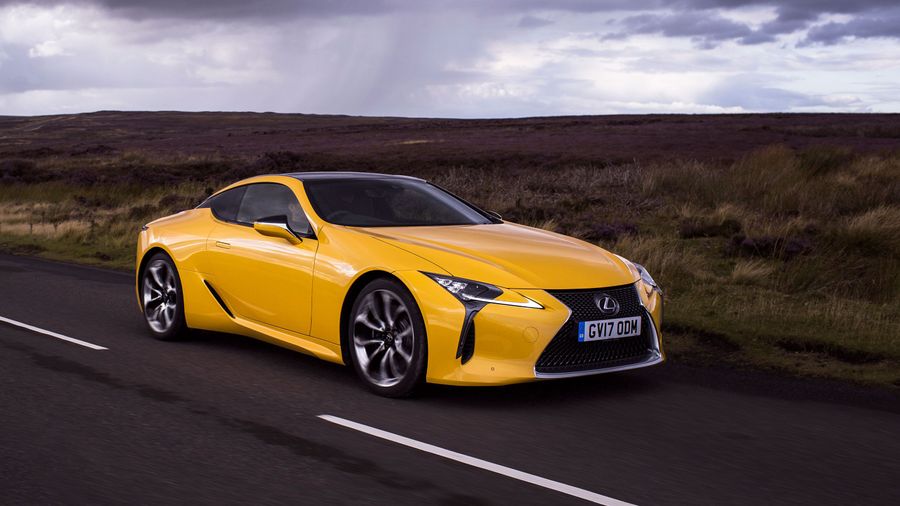