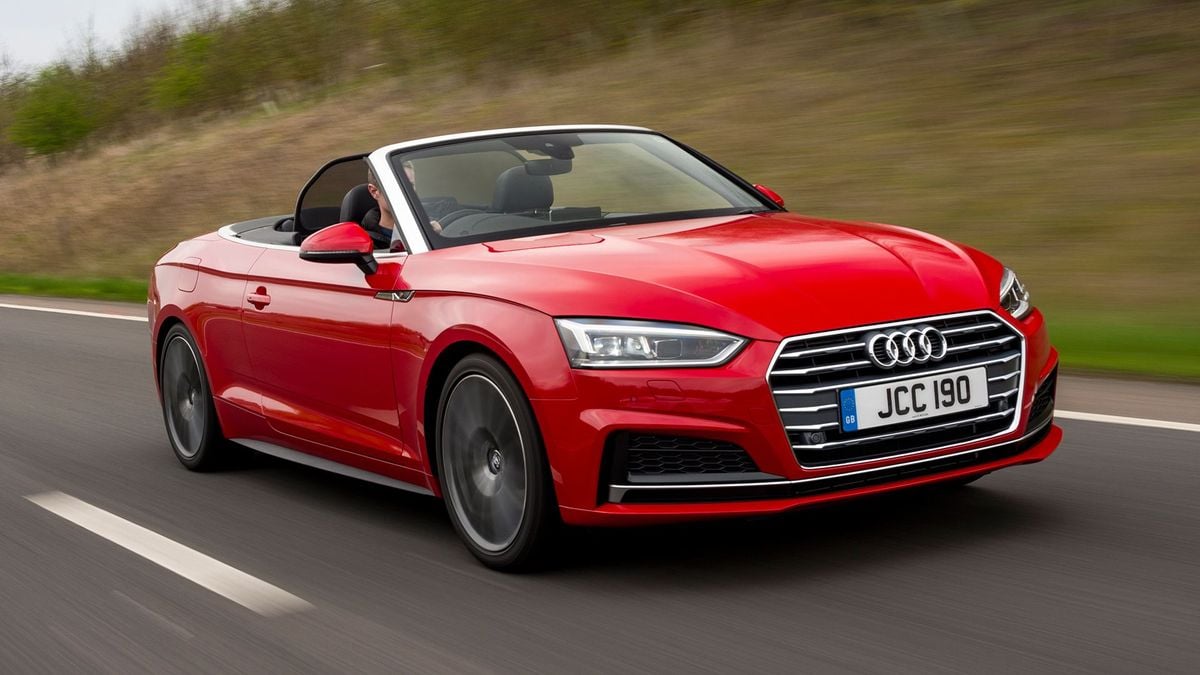 You only need to drive the A5 Cabriolet 100 metres to realise Audi has thrown everything it knows at its this four-seat convertible. It boasts a range of powerful, efficient and remarkably refined engines and the cabin is a near-perfect execution of precision and quality. With the latest advances in acoustic roof insulation ensuring longer journeys can be enjoyed almost as much as boulevard cruises. Put simply, if you’re in the market for an upmarket, four-seat sun-seeker, they don’t come any more refined or composed than the A5 Cabriolet.

Running costs for a Audi A5 Cabriolet 4/5 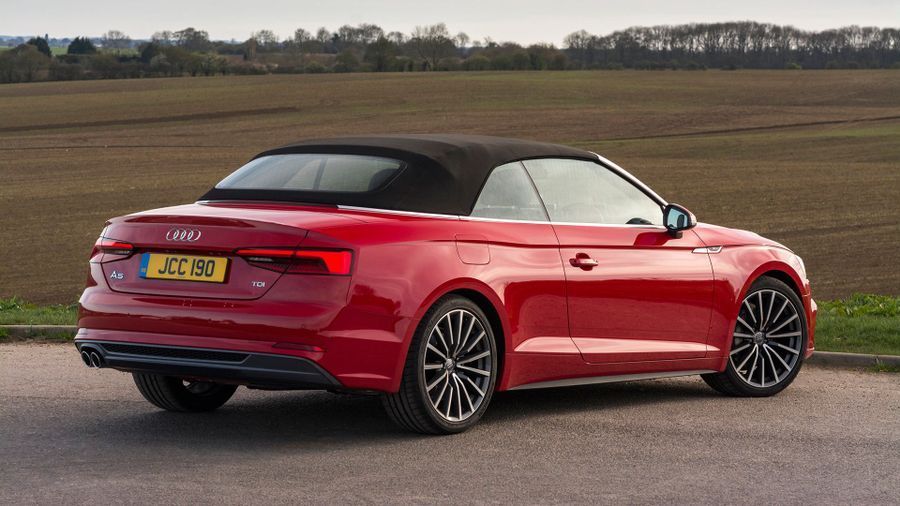 Whenever you look at an Audi, chances are you’ll also be looking at cars from its big rivals, BMW and Mercedes-Benz. In the case of the A5 Cabriolet, we’re comparing with the BMW 4 Series Convertible and the Merc C-Class Convertible. A left-field alternative could also be Ford’s Mustang convertible. All four are similar when it comes to purchase price. While the exact running costs will vary depend on which models you go for, we’d expect the extra power you get in the Ford to be counteracted by the high fuel costs and surprisingly high repair and maintenance costs, making it pricier to run than the rest. But for the German trio, there’s very little to separate them, which means that in your quest for premium top-down motoring, you’re probably better going with your heart than searching for the most cost efficient option.

Reliability of a Audi A5 Cabriolet 2/5 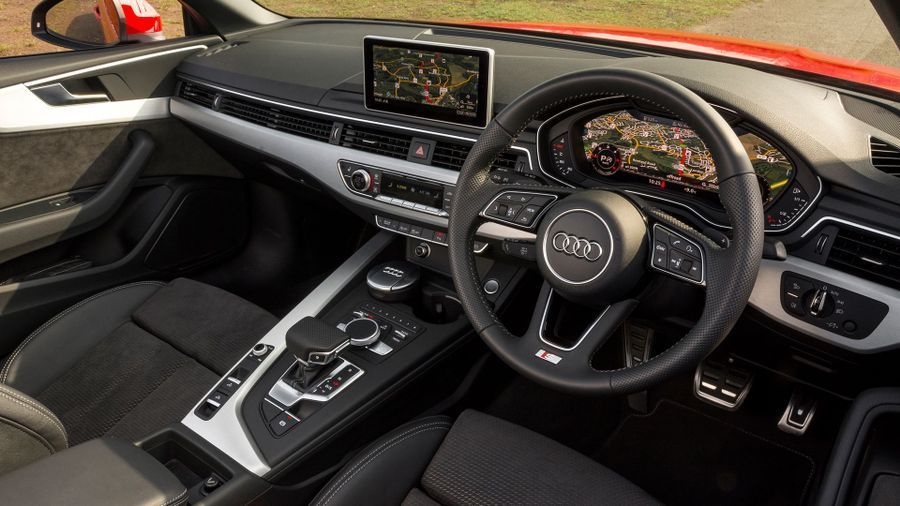 Given the solid look and feel of its products, it seems strange that as a brand, Audi has never fared particularly well in customer satisfaction or owner reliability surveys. Buyers often complain about the frequency of repairs, and at the cost of them. As a result, the brand sits well down the manufacturer rankings in the Warranty Direct Reliability Index, as well as in the JD Power Vehicle Dependability Study for several years in a row. Like almost every other brand in this exclusive class, Audi offers a standard three-year/60,000-mile warranty for the A5 Cabriolet.

Safety for a Audi A5 Cabriolet 4/5 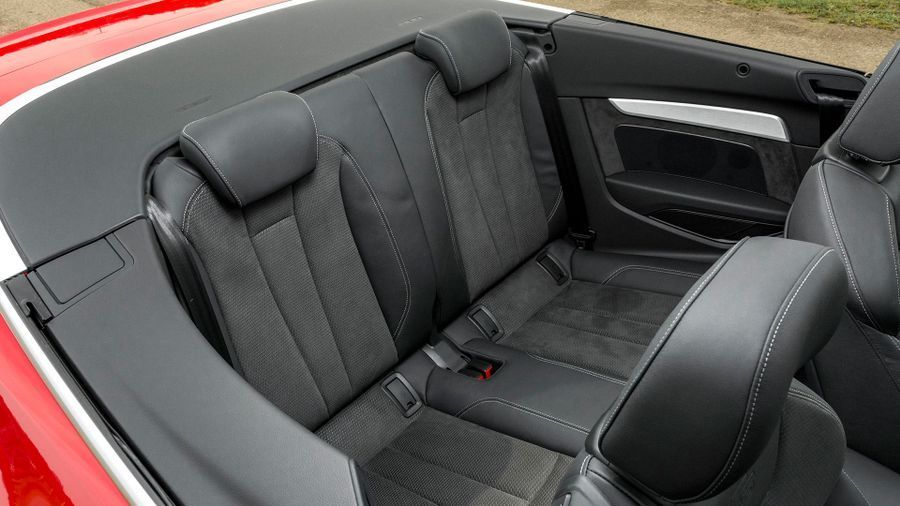 The Audi A5 Cabriolet provides plenty of technology to enhance safety and comfort, including a city safe system that autonomously brakes the car if it detects an impending collision. However, because there’s no way of packaging airbags into the soft top, the Cabriolet only gets four. You can add a labour-saving traffic jam assist system to automatic versions of the A5. In slow-moving traffic, up to 40mph, the car will automatically brake and accelerate, and on less congested roads, it can even take charge of steering. Traffic sign recognition, cross traffic assist and a head-up display are also options.

How comfortable is the Audi A5 Cabriolet 5/5 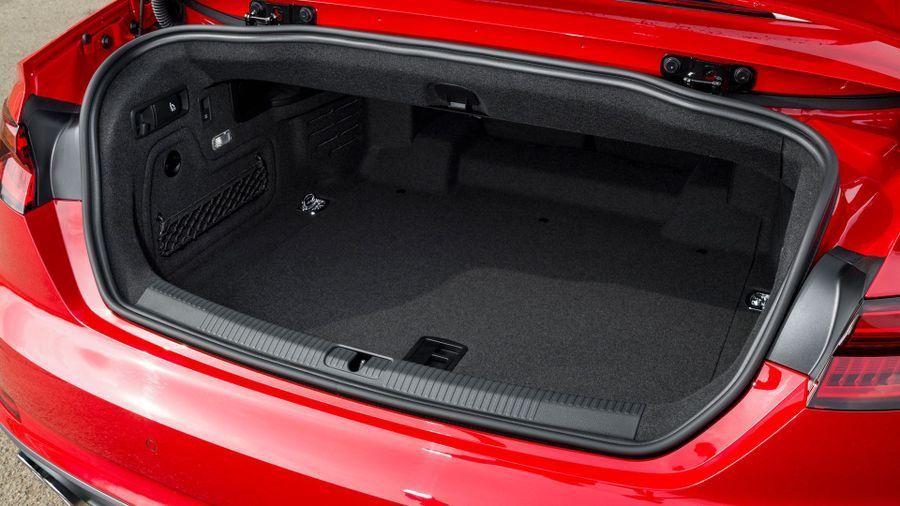 The A5 Cabriolet’s interior is typically Audi. In other words, brilliant. And the best part, you get to drop the roof and show it off to an admiring public. Complete with impeccable materials, and assembled with scrupulous attention to detail, the A5’s cabin simply oozes quality and substance. While the interior panels all match their counterpoints with millimetre precision, each switch and every control, including the rotary controller for the infotainment system, are weighted and balanced to communicate a sense of silky precision. Additionally, all the usual touch points are thickly padded and trimmed with plush materials, while the four-ringed embossed steering wheel and the stubby gear shifter look and feel reassuringly expensive. With all this to shout about, it’s all the more disappointing that the deployable wind deflector looks and feels like a bit of an afterthought. It feels rather flimsy and is a bit of a faff to erect. And in some cars we tested, it flopped down when hit with a gust of side wind.

The A5’s relatively long wheelbase translates into plenty of leg and elbow room for those up front, but when the roof is up, that plunging roofline means rear head-room isn’t quite so generous. While kids will be okay, there’s a good chance anyone approaching six-foot will feel their hair brushing against the soft top’s lining. While the boot’s lid is powered and can be opened via the key fob and closed at the press of a button, opening it reveals a fairly decent, albeit shallow, 380 litres of luggage space, and that space reduces to 320 litres when you drop the roof.

At least the seats split/fold to help boost that capacity when required. The Cabriolet also features a handy drop-down box located in the roof of the boot. When it’s folded up it will allow you to maximise luggage capacity, and when it drops down it lets you see how much space will be left over when the roof is dropped. As with most Cabriolets, you can raise or lower the roof at speeds up to 30mph – it takes 15 seconds to open and 18 seconds to close – but the A5 goes one better, as it can be operated by a single tug of the deployment lever, rather than having to hang onto to the lever for the duration of the operation.

Perhaps the greatest achievement of the latest A5 is its ability to isolate occupants from the dreaded collywobbles that blight most four-seat convertibles. It feels remarkably shake-free, dealing with lumps and bumps in assured fashion. You still get the occasional clue that the lack of roof has lowered structural stiffness, via some vibrations in the rear view mirror, and the odd wobble through the steering column, but for the most part, the windscreen pillars, seat frames and side windows remain remarkably resistant to tremors.
This body integrity is supplemented by smoothly measured suspension that allows the A5’s body to float along fast flowing roads with great poise. However, there's no doubt that cars with the lower S line suspension do have a firmer feel, transmitting more of the lumps and bumps to the car's occupants.

Roof down, with the wind deflector in place, front passenger hair-dos will remain unmolested, but a fair bit of buffeting can be heard swirling around the back of the cabin at 70mph. If you want to take the kids along, you’ll need to remove the wind deflector, and this dramatically increases the buffeting. It’ll be bearable if you’re just popping into town, but if you’re venturing further afield, you’ll definitely need to pop the roof up.

Handling depends a great deal on which engine you choose. The four-cylinder diesel A5 feels the most softly sprung and it rolls more in corners than the petrol models, and once you get it turned into a corner, you never really lose the sensation that the engine’s substantial heft is lolling around under the bonnet. The 2.0-litre petrol-engined car feels far more neutrally balanced and with it, more composed in bends, remaining flatter and reacting much quicker to steering inputs.

Features of the Audi A5 Cabriolet 4/5 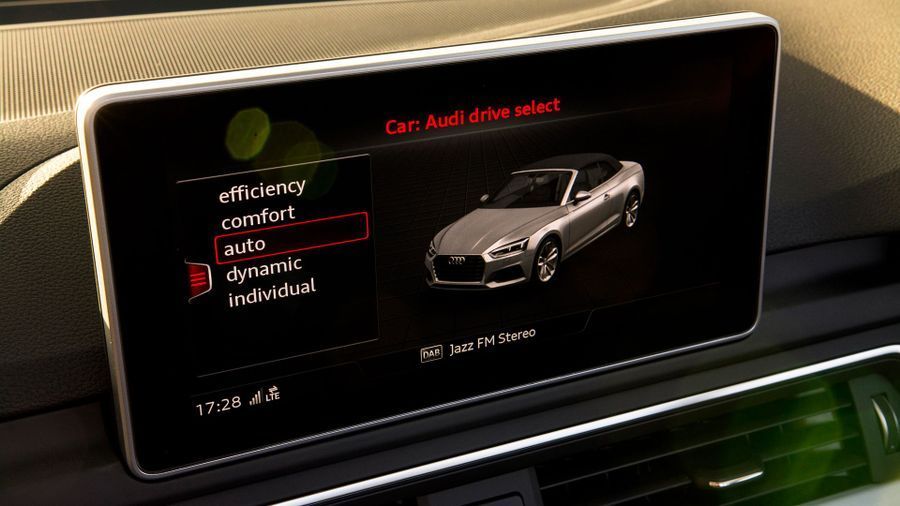 An S line upgrade adds leather and Alcantara trimmed seats, complete with embossed S line signature and four-way lumbar adjustment. S Line models also feature bigger 19-inch wheels and sports suspension that is lowered by 20mm, so you’d be well advised to take a test drive to see if you are comfortable with the firmer set up before being seduced by the slinkier looks.

The same is true for the Vorsprung model, which has 20-inch wheels and adaptive comfort suspension, as well as full leather upholstery and lever Matrix LED headlights, which can maintain high beam without dazzling oncoming drivers. Audi’s virtual cockpit, which replaces the standard speedo and rev counter with a 12.3-inch TFT screen that shows selectable graphics, is sure to be a popular option. Another option worth considering is a head-up display, which displays relevant information onto the windshield directly in the driver’s field of vision. 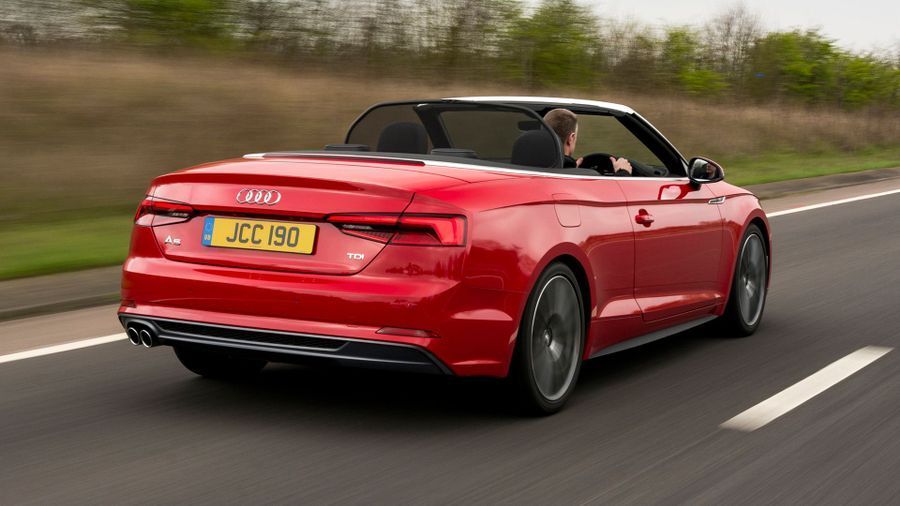 There’s something almost spooky about the A5’s ability to suppress engine noise, vibration and harshness. It is powered by some of the most up-to-date powertrains in motoring, but when even the diesel engines sound this smooth and quiet, it suggests there’s more going on under the bonnet than meets the eye. Whether it’s extensive use of the latest sound-deadening materials, or a newfound ability to fine tune engine mounts, or perhaps both, it’s difficult to say. Either way, the results are mightily impressive.

The 190-horsepower 2.0-litre diesel engine, labelled 40 TDI, has more than enough thrust, supplementing its effortless punch with an extremely smooth and refined power delivery, easily outshining similarly sized power units from BMW and Mercedes. The 190-horsepower 2.0-litre turbocharged petrol engine – called the 40 TFSI – is nothing short of immaculate. It’s so flexible and so smooth, if anything, some owners might find it almost too quiet when driving with the roof down. There’s also a more powerful petrol engine, the 45 TFSI with 245 horsepower, but we’ve not tried it yet. 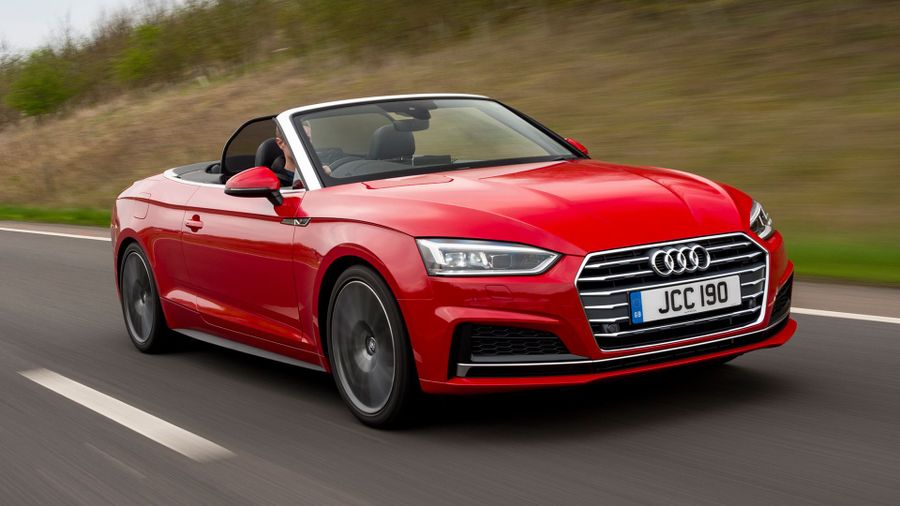