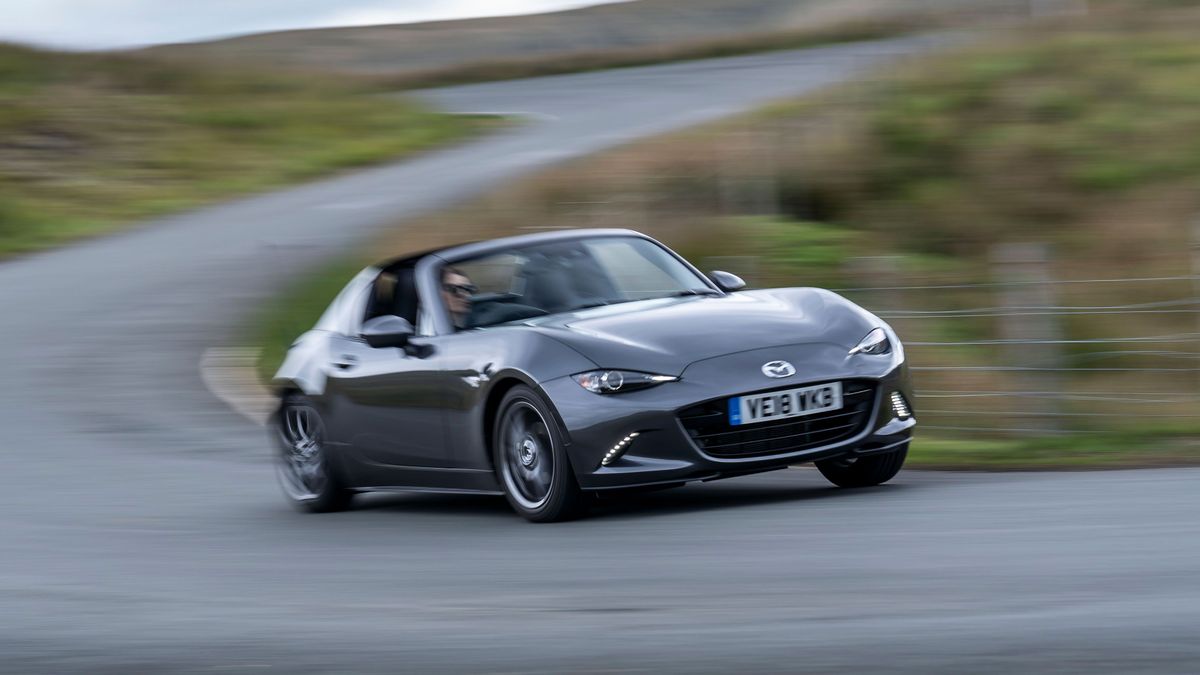 The Mazda MX-5 RF delivers all the thrills of the regular MX-5, but with a bit more comfort. It’s a compelling blend of fun, affordability and style and is one of the best sporty cars at this price. It’s no surprise that the MX-5 was named Most Loved Car in the 2019 Auto Trader New Car Awards. 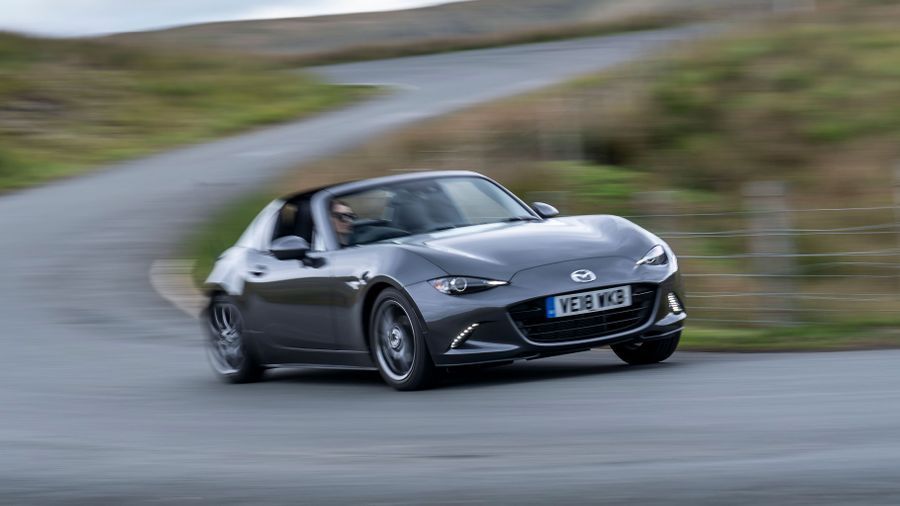 The MX-5 RF is good value when you consider that most other sporty roadsters cost thousands more to buy, and aren’t as much fun to drive. It’s competitively priced next to other small drop-tops such as the Mini Convertible, too. Running costs are reasonably low, thanks to the MX-5’s low weight and efficient petrol engines. In fact, its official fuel consumption and CO2 emissions figures are no higher than for the average family car.

Residual values will be strong, while servicing costs aren’t too high and Mazda offers fixed-price servicing packages that allow you budget for maintenance costs. Insurance costs may be a bit pricey, depending on your circumstances, but compared with a similarly priced hatchback or SUV the MX-5 actually makes sound financial sense. 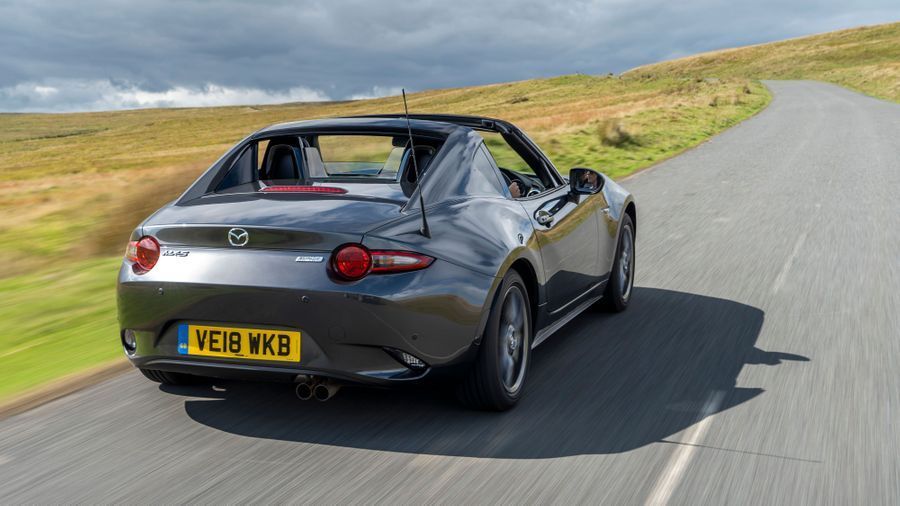 Mazda is ranked an impressive fifth out of 40 manufacturers in the Warranty Direct Reliability Index, while the previous MX-5 scores very highly as a specific model. While the latest model comes with more complex features, it’s still comparatively simple and is the continuation of a line of roadsters that have an excellent reputation for durability.

Mazda finished mid-table in the the latest JD Power’s UK Vehicle Dependability Study, although its score was below the industry average. Warranty cover for the MX-5 is a bog-standard three years or 60,000 miles. 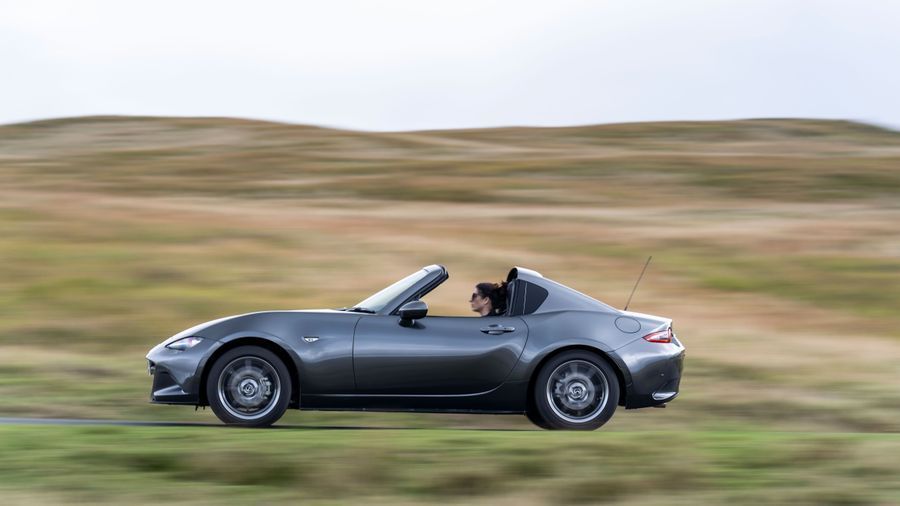 The MX-5 harks back to classic roadsters but it’s packed with bang-up-to-date safety kit. Every version comes with front and side airbags, a tyre pressure monitoring system, cruise control with a speed limiter and a pop-up bonnet that helps to protect pedestrians.

All but the cheapest versions also have lane departure and driver alertness warning systems, as well as traffic sign recognition. Crucially, they also feature an automatic emergency braking system that detects both pedestrians and vehicles ahead. The top two trims have a blind-spot warning system and Rear Cross Traffic Alert, which warns you if you are about to reverse out of a parking spot into the path of oncoming traffic.

How comfortable is the Mazda MX-5 RF 4/5 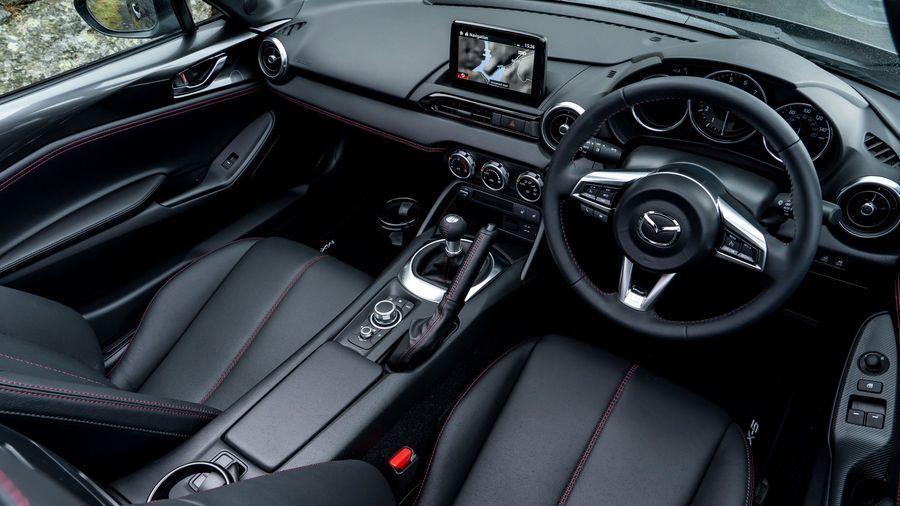 Anyone opting for the RF version of the MX-5 over the standard car will expect a degree of extra comfort and it’s folding metal roof provides that, with less noise in the cabin at speed and less buffeting when the roof is folded.

Otherwise it’s business as usual, so although it requires a couple of compromises the RX-F is a perfectly usable and civilised everyday car. Tall drivers will certainly find the cabin snug, but there’s enough adjustment in the seat and steering wheel to satisfy most shapes and sizes.

The interior might not be a match for the Mini Convertible’s in terms of wow factor, but it’s stylish and well built nonetheless, and very easy to use.

Practicality – as you’d expect of a car as small as this – is limited. The boot is large enough for little more than a couple of soft bags, but unlike some convertibles it has the same capacity whether the roof’s up or down. In-cabin storage is in short supply, but there are a set of handy removable cup holders and a lockable storage cubby. The electrically operated roof (Retractable Fastback in Mazda terminology, hence the name) performs some neat acrobatics as it is raised or lowered, as the various sections swivel and glide into place. It’s a piece of street theatre and takes place in 13 seconds, which is reasonably quick.

Ride quality is good for a sporty car, helped in no small part by the MX-5’s low weight (the RF only weighs a fraction more than the fabric-roof version). Cheaper versions with smaller wheels, in particular, glide over rough roads smoothly. The more powerful, sportier models have stiffer suspension and larger wheels that give a much firmer, but still surprisingly forgiving, ride.

The RF feels a bit different to drive compared with the standard MX-5 due to its small increase in weight and bespoke suspension settings, but it has a very similar character overall. That’s a good thing, because its rear-wheel drive layout and playful character are a keen driver’s dream. Few sportscars – even much more expensive ones – provide such a strong connection between road, driver and machine. When you’re not making the most of the MX-5’s great handling it’s a perfectly civilised everyday car that’s easy to park and happy pootling along in traffic. 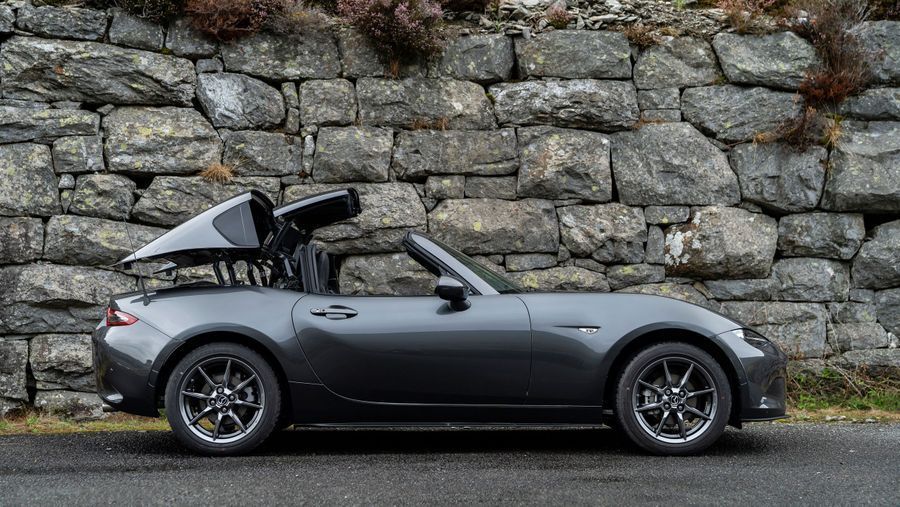 Move up one trim and you gain extras such as automatic headlights and wipers, leather upholstery and rear parking sensors. Equipment for the top two trims includes a rear-view camera, adaptive headlights and a Bose sound system. 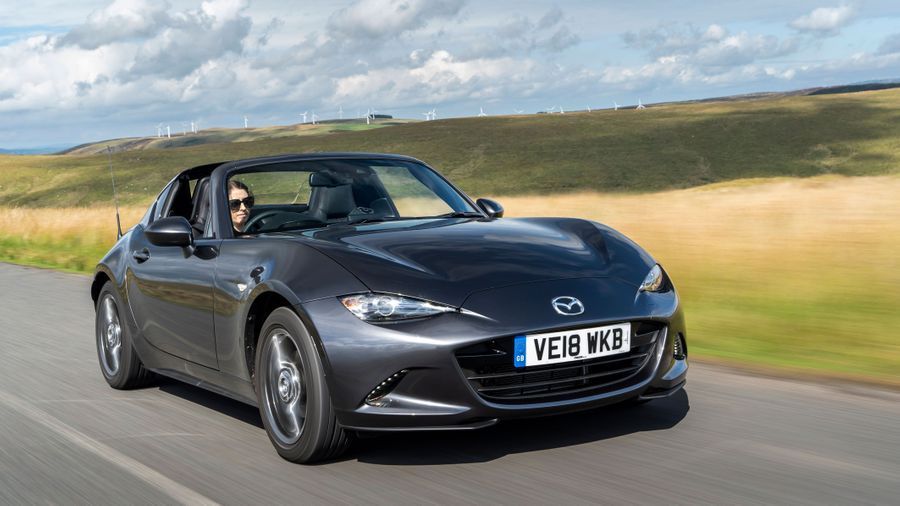 As ever, the MX-5 is offered with petrol engines that aren’t especially powerful but will provide eager performance if you’re prepared to work them hard. The smaller of the two available is a 1.5 with 132 horsepower. It’s perfectly up to the job, giving a 0-62mph time of 8.3 seconds, but if you really want to make the most of the MX-5’s great handling it’s worth paying extra for the 184-horsepower 2.0-litre model. This gives you a much feistier 0-62mph time of just 6.5 seconds and much stronger responses when you put your foot down on the move. It’s keen to rev and sounds fruitier, too. 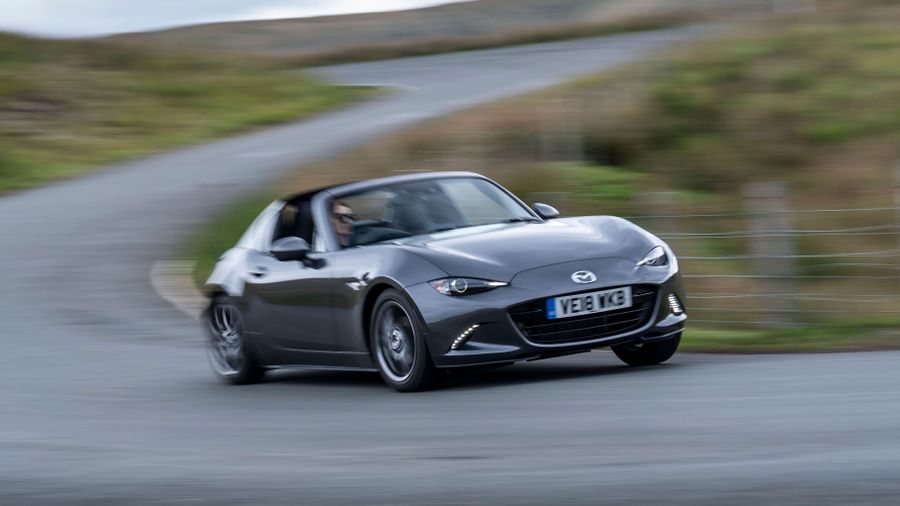