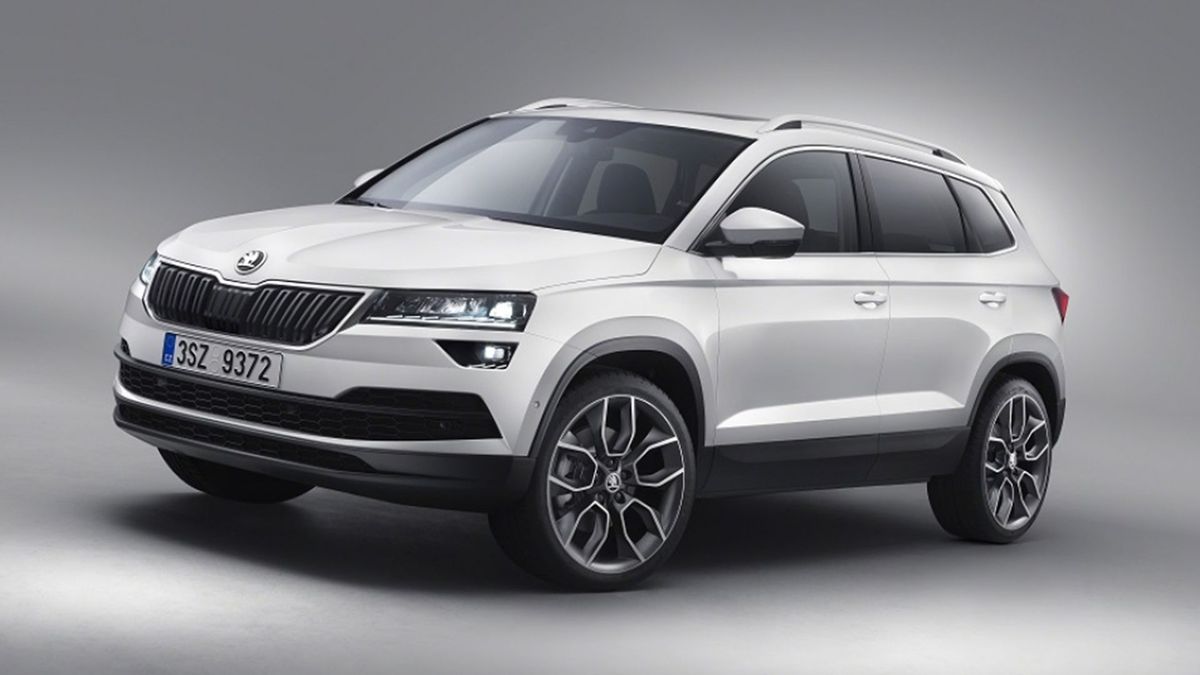 View gallery
First published: 19th May 2017
Share on Facebook on Twitter
These are the first pictures of Skoda’s latest SUV, the Karoq. It’s effectively a baby brother for the Kodiaq and will replace the Yeti in the company’s line-up.

We first saw a camouflaged version of the car at the end of last month, but these images show clearly that the new model looks very much like a shrunken version of the seven-seat Kodiaq. The front end is dominated by the chrome-trimmed grille and LED headlights that will be standard on some of the upper trim levels, while a pronounced crease runs along the side to the rear lights, which are also LEDs.

Inside, Skoda assures us, the five-seat Karoq will provide exceptional space for passengers and luggage. With the standard rear seat, the boot capacity is 521 litres (a little more than in the Seat Ateca), but with the optional VarioFlex system – three individual rear seats that can be separately adjusted or even completely removed – that can be increased to 588 litres. With the seats removed, the boot space is up to 1810 litres.

Overall, the Karoq is almost identical in size to sister brand Seat’s Ateca, which is no surprise, given the two cars have much in common under the skin. And, also thanks to Skoda being part of the Volkswagen Group, the Karoq will come with the latest technology, infotainment and driver assistance systems the group has access to. 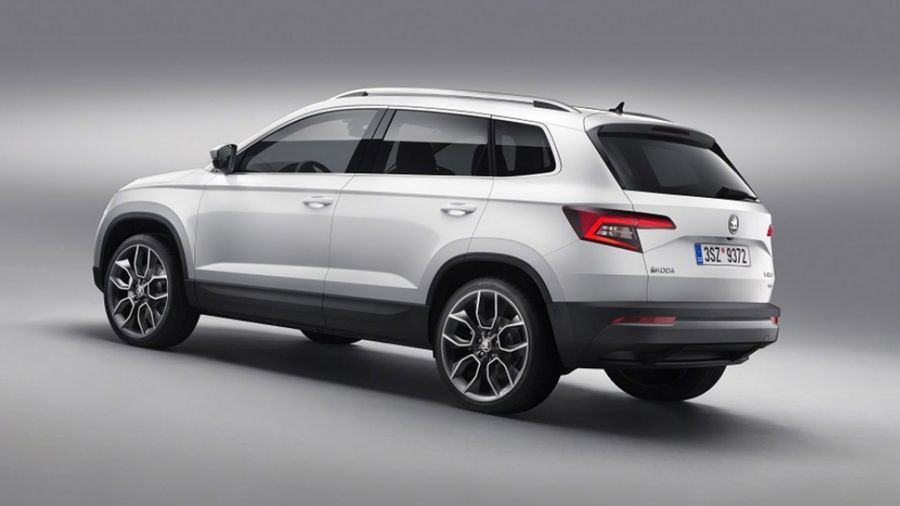 View gallery
We don’t yet know the standard specification of the Karoq in the UK, but Skoda has said the likes of Apple CarPlay, Android Auto and MirrorLink smartphone integration will be available with the higher-grade infotainment systems, and optional on the most basic. They will be operated through touch-screen displays, while the top systems will also have a WiFi hotspot, and buyers will be able to access various online services through the Skoda Connect app.

The Karoq will also be available with the fully digital dashboard that has already appeared on various Volkswagen and Audi models, while among the safety features on offer will be Park Assist, Lane Assist and Traffic Jam Assist, as well as Blind Spot Detect, Front Assist with predictive pedestrian protection and Emergency Assist.

Buyers will be able to choose from five engines – two petrol and three diesel – with four of them new to the company’s cars. Their power outputs range from 113- to 187bhp, and their size from 1.0- to 2.0-litres. All are available with either a six-speed manual or seven-speed semi-automatic gearbox. The only exception is the most powerful diesel engine, which comes only with an automatic transmission and four-wheel drive. 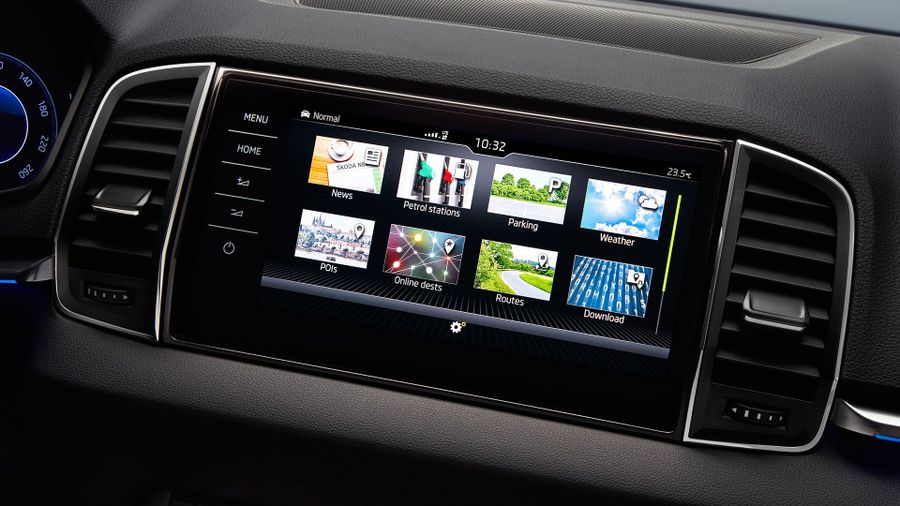 View gallery
The most economical unit is the 148bhp version of the 2.0-litre diesel engine. This averages well over 60mpg and has CO2 emissions of 115g/km, but almost every engine (when paired with a manual gearbox and front-wheel drive) has CO2 emissions of less than 120g/km. Again, the exception is the most powerful diesel, with its 138g/km CO2 emissions.

As an option, buyers will be able to specify the Driving Mode Select system, which lets the driver choose from Normal, Sport, Eco, Individual and Snow modes. In addition, all-wheel-drive versions will also have an Off-Road mode, and certain versions will have the option of Dynamic Chassis Control, which allows the driver to switch between Comfort, Standard and Sport modes, which adjust the way the suspension behaves.

There’s still no firm word yet on when the Karoq will go on sale or how much it will cost. However, we expect it to follow the usual Skoda pattern of being cheaper than similarly sized cars – in this case, the likes of the Ateca and Nissan Qashqai – which suggests a starting price of something like £17,000 for the range when it goes on sale in the second half of this year. 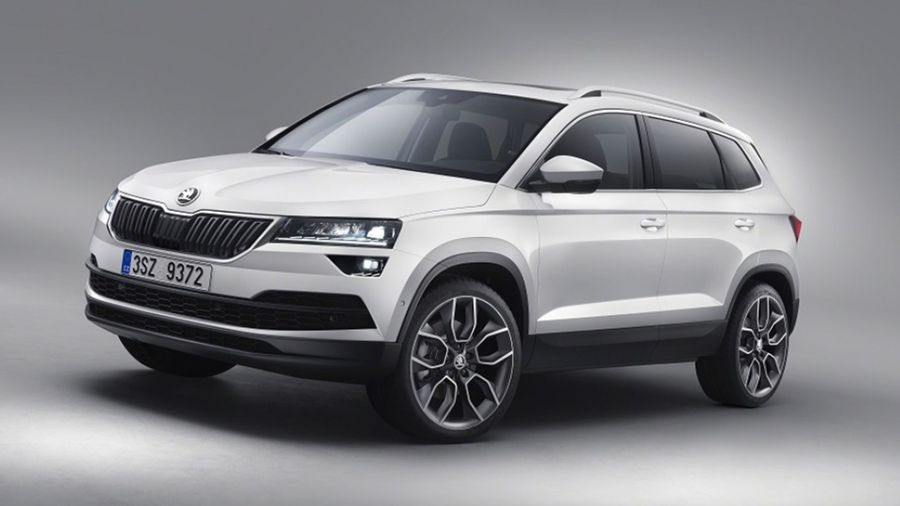