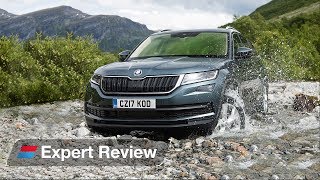 The Skoda Kodiaq is a rare beast. It’s a big SUV with a premium image, space for seven, loads of equipment, and a high-quality interior, but a low price. The cheapest models do not offer the same standard of kit as the mid-range versions (or seven seats), but it still represents great value motoring, and undercuts anything else like it by miles. The Kodiaq was named Best Seven-Seater in the 2019 Auto Trader New Car Awards.
Our verdict

Is the SKODA Kodiaq a good car?

Running costsSafetyFeaturesReliabilityInteriorPerformance
One of the biggest attractions of the Kodiaq is its low entry price: the entry-level version equipped with the 1.4-litre petrol engine costs the same as a mid-spec VW Golf. That model only has five seats, and a more modest level of standard kit, but even the 2.0-litre diesel with the toys you want in a modern family car will cost thousands less than its comparable rivals from Hyundai, Kia and Land Rover. It will also be cheaper than those competitors when it comes to PCP finance deals, with Skoda consistently offering hefty dealer contributions and incentives.

As for how much the Kodiaq will cost you in tax and fuel, this is still a big, heavy car, so expect the diesels to return better long-distance economy. Petrol models don’t fare as badly as you might think, and are cheaper to insure than the diesel versions. The biggest news, though, is that the Kodiaq will hold onto its value a lot better than most other cars in the class. According to our calculations, this means when you tot up all your costs over a three-year ownership period, the big Skoda will cost you significantly less than any of its key rivals.

With 40 new and 1,047 used SKODA Kodiaq cars available on Auto Trader, we have the largest range of cars for sale across the UK.