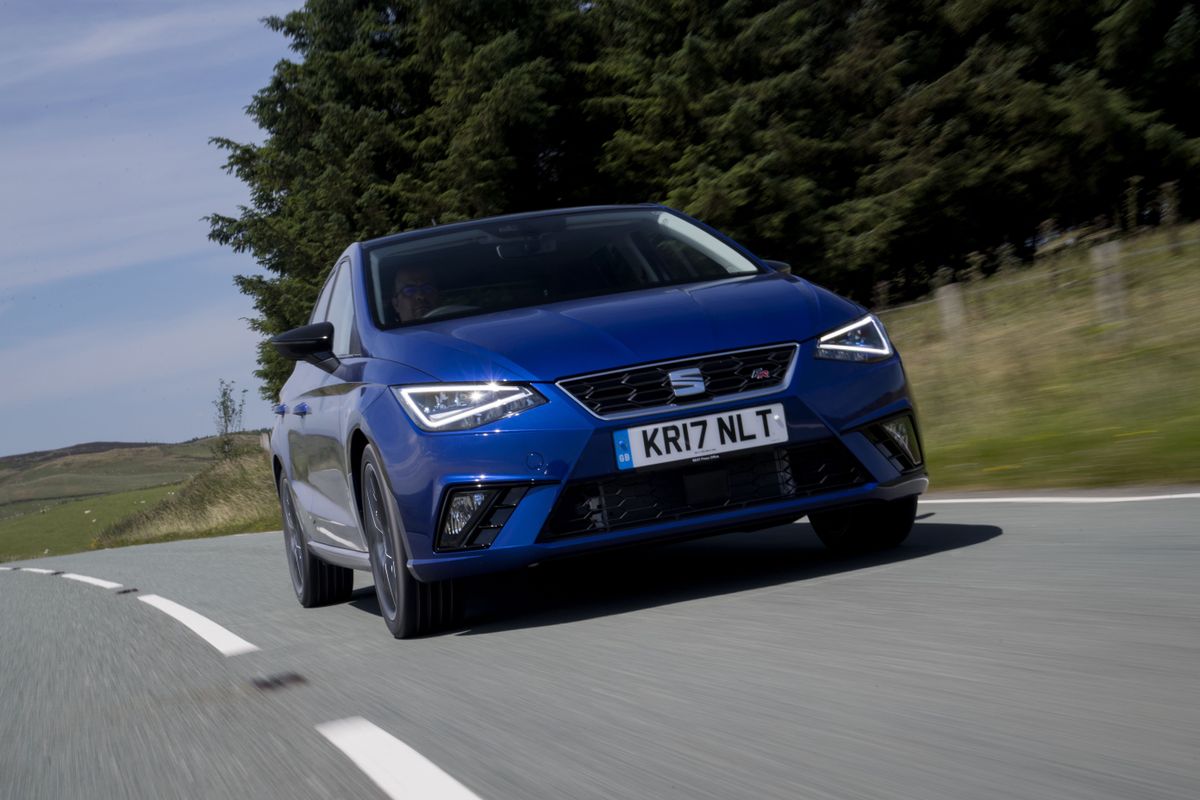 The Seat Ibiza is a five-door supermini to rival the likes of the Ford Fiesta, Vauxhall Corsa and Volkswagen Polo. It looks to attract buyers with smart styling and lots of in-car technology, and the fact that it’s affordable to buy and run won’t do it any harm, either.

Running costs for a SEAT Ibiza 4/5 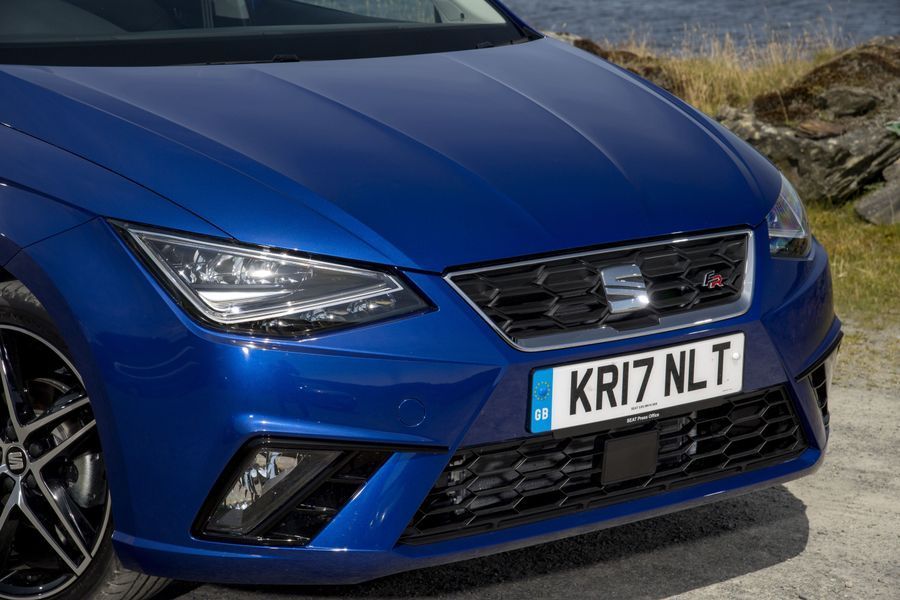 Compare the Ibiza’s prices with those of most of the obvious rivals – cars such as the Ford Fiesta, Volkswagen Polo, Peugeot 208 and Renault Clio – and you’ll find, happily, that the Seat’s sit very much at the lower end of the scale. Granted, the Ibiza doesn’t have the strongest resale values in the class, but they are still very competitive, and the low initial price means you should still be ahead on overall long-term running costs. Fuel economy and CO2 emissions were very competitive, too, so no alarm bells there, and servicing and maintenance costs look very competitive, too.

Reliability of a SEAT Ibiza 3/5 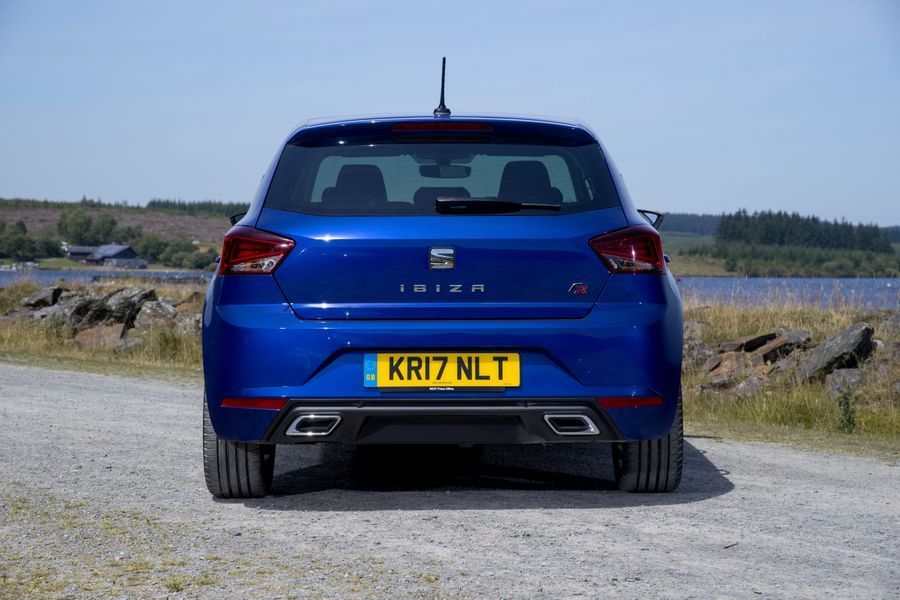 According to the 2019 JD Power Vehicle Dependability Survey, things couldn’t look any more average in this area. Seat finished slap-bang in the middle of the table of manufacturers, right on the cusp of the industry average (just ahead of it, actually). Should anything go wrong with your Ibiza, Seat offers an also-very-average three-year/60,000-mile warranty.

Safety for a SEAT Ibiza 4/5 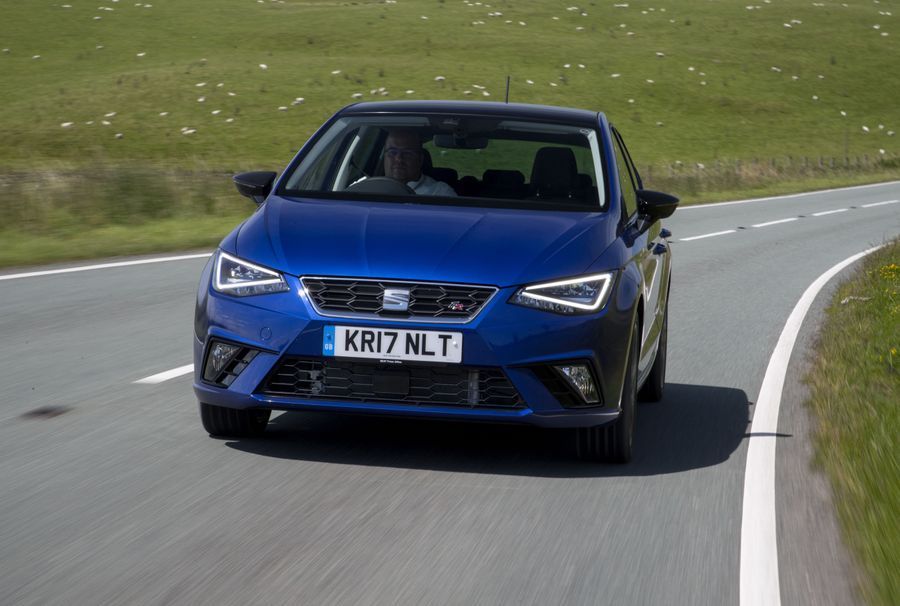 The really good news is that all versions of the Ibiza get an autonomous emergency braking system as standard, no matter which trim level you pick. Many rivals offer such technology, but on most, it’s provided only on high-level trims or as an optional extra. Every model also has six airbags, a tyre pressure-monitoring system, stability control, two Isofix child seat mountings and a hill-hold control function, while FR and Xcellence versions add a tiredness recognition sensor and an alarm.

How comfortable is the SEAT Ibiza 4/5 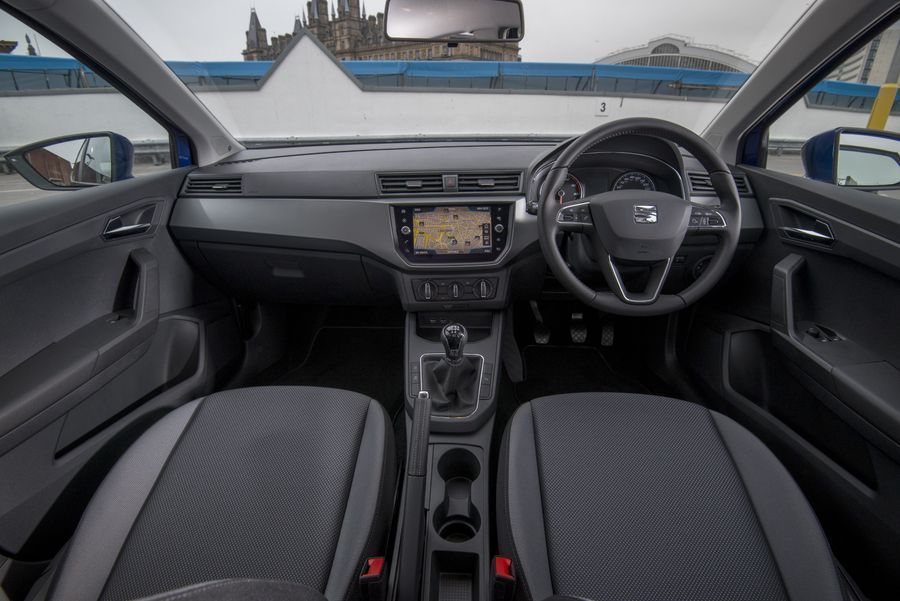 Headroom and legroom are pretty generous in the rear seats, which will allow two gangly adults to travel comfortably, and a wide middle seat means carrying a third isn’t completely out of the question, either. At 355 litres, the boot is bigger than in a lot of the Ibiza’s competitors, and it’s a very useful square shape, too. The rear seats lie at an angle when you fold them down, and there’s also a significant loading lip to contend with, but that’s also the case with the vast majority of the Ibiza’s rivals.

The interior looks smart and sophisticated, too, especially when compared with those of many rival cars. Yes, all of the plastics you find are hard – rather than soft – to the touch, but they’re nicely finished and there are enough metallic trims and glossy panels to hike up the overall feeling of quality. A Volkswagen Polo feels posher, but the Ibiza has the measure of most other rivals for classiness. The 8.0-inch touchscreen infotainment system you get on SE Technology trim and above looks really cool, and it’s reasonably easy to use, if not quite as easy as the equivalent systems in some rivals.

Most buyers see Seat as a reasonably sporty brand, and the Ibiza delivers enough ability in the corners to support that view. It feels light and agile when you’re changing direction, and, with lots of grip and keen control over its body movements, it’s good fun to fling around. True, the throttle response could be sharper, but you’ll like the snappy gearshift and responsive, nicely weighted steering. It also manages to combine that agility with a reasonably smooth ride, but while it stays comfortable most of the time, you do feel a little more edge from bumps than you do in some competitors. FR versions of the Ibiza come with a sports suspension that’s been both lowered and stiffened, but we haven’t yet had the chance to try it.

Features of the SEAT Ibiza 4/5 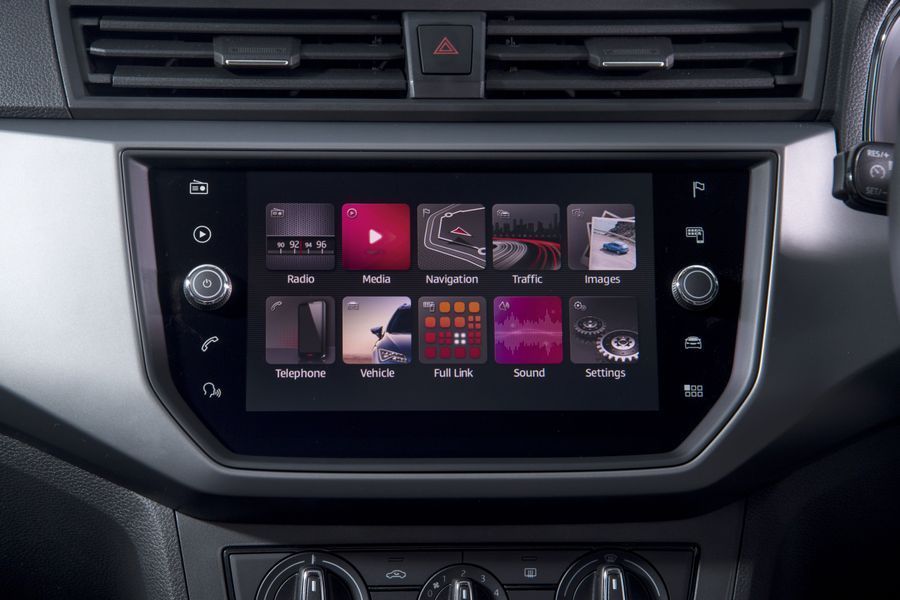 The base-level SE trim comes well-equipped, with metallic paint, alloy wheels and LED running lights on the outside, and a six-speaker sound system with Bluetooth, DAB and full smartphone integration (by way of both Apple CarPlay and Android Auto) on the inside. For many buyers, that’ll be more than enough. SE Technology gives you a bigger 8.0-inch colour touch-screen (the SE’s is 6.5 inches) with sat-nav, while the FR gives you a sporty external makeover, full LED lighting, cruise control, rain-sensing wipers, , a leather-effect dashboard and a sports suspension. FR Sport adds a digital cockpit (a screen instead of traditional instruments) and microsuede upholstery, as well as dual-zone air conditioning. Xcellence versions have keyless go and rear parking sensors, while Xcellence Lux cars have adaptive cruise control, front parking sensors and a reversing camera. 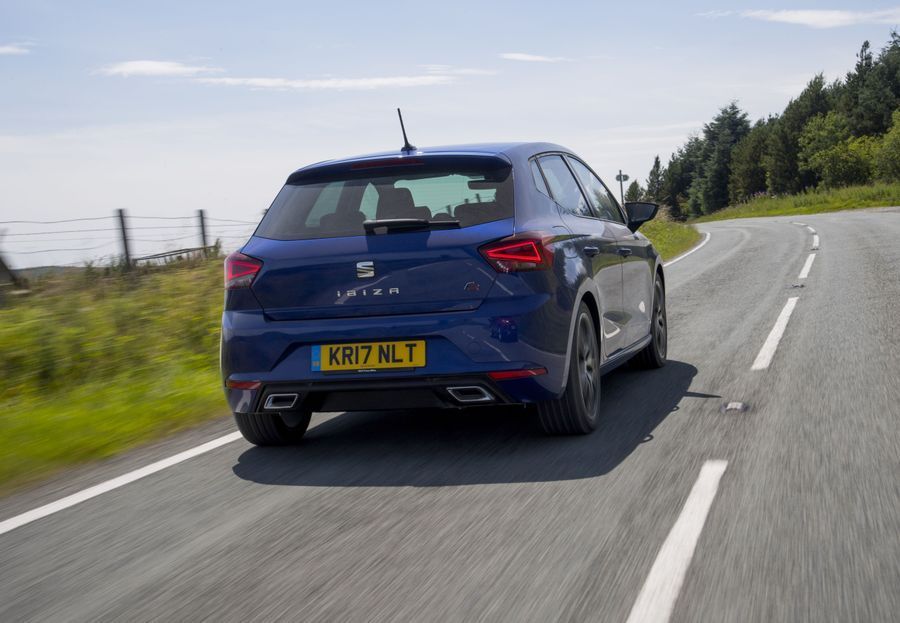 There’s a range of petrol engines available in the Ibiza. The entry-level unit is an 80-horsepower three-cylinder unit that gives predictably modest pace, but it goes along pretty nicely if you don’t let the rev counter needle drop below the middle of the dial, and it’s also pretty smooth and quiet. However, it does start to struggle quite a bit if you come up against a steep hill, or you load up your car to the metaphorical rafters with stuff.

You don’t have that problem in the first of the turbocharged versions, which has 95 horsepower, because it delivers stronger pull from further down the rev range, making it more flexible and more eager, and that alone makes it worth the upgrade. It’s still a little reluctant at the very bottom of the rev range, and the power delivery can be a little stutter, but it’s still a vast improvement, and the the best engine in the range. There is a 115-horsepower version of the same engine, which has the same character traits, but because it doesn’t ultimately make the car go that much faster, we don’t think it’s worth the extra over the 95-horsepower version.

There’s also a 95-horsepower 1.6 diesel version, which we’re yet to try. All the cars we’ve driven have been fitted with a sweet-shifting manual gearbox, so we’re also yet to try a car with the optional automatic gearbox that’s available on the 115 petrol. 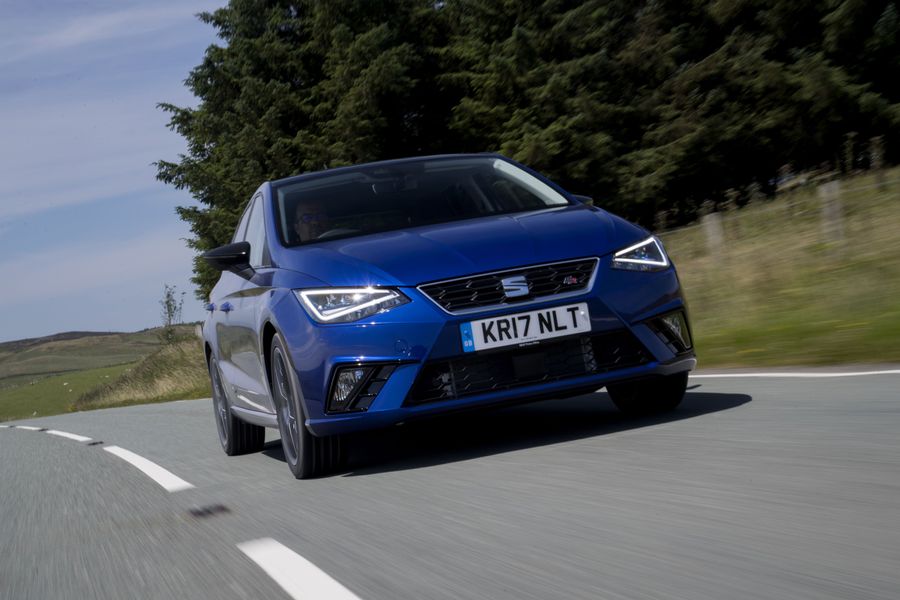