First published: 2nd February 2021
Share on Facebook on Twitter
‘Affordable’ is relative and even the new entry-level Porsche Taycan is an expensive car. The starting price of £70,980 is pretty hefty and, because it costs over £50,000, there’s no Government Plug-In Car Grant (PICG) to sweeten the pill as there is on more mainstream EVs. But before options it costs nearly half what you’d pay for the range-topping Turbo S model. And might actually be the better car to drive, as well as the most reasonably priced.

You can have it with the choice of the standard ‘Performance’ battery or the bigger ‘Performance Battery Plus’, the latter adding just over £4,000 to the price but increasing the power output from 408 horsepower on ‘overboost’ to 476 horsepower. It also increases the ‘best case’ official range from 268 miles to 301 miles, meaning it has the best endurance of any Taycan model, Turbo S included.

So, what are you losing out on? Horsepower is a traditional measure of sporting prowess and, predictably, the more you spend on your Taycan the more it has, all the way up to the 761 horsepower of the Turbo S. Still some way off the 1,000 horsepower (and then some) of the new ‘Plaid’ version of the Tesla Model S but plenty to be going on with. Bragging rights matter to many buyers but, realistically, the output of the ‘base’ Taycan is still more than enough, especially against the 330 horsepower of an equivalently priced Panamera. Like for like it could also save company drivers a heap of cash in tax. 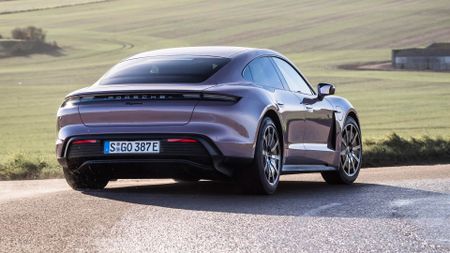 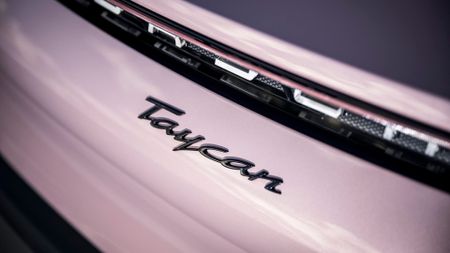 View gallery
Of bigger concern – especially on slippery winter roads like the ones we drove it on – might be the fact all that power goes to the rear wheels. If that has you coming out in a cold sweat fear not, because it turns out the rear-wheel drive Taycan is perfectly capable of using all its performance without any difficulty at all, even at this time of year. Without the weight of the extra motors up front it arguably feels sharper to drive, too. And it looks just as good inside and out as any other Taycan, so there’s no compromise on the style. OK, it’s a little slower off the line than its all-wheel drive brothers. But it still feels effortlessly fast, especially compared with any internal combustion engine rival at this price.

It also puts the Taycan on the shopping list of a wider group of potential buyers. The Jaguar I-Pace is one of the cooler and better driving EVs in this league and has just been updated with new interior tech. But it can’t match the pulling power of a Porsche badge and the fact most people won’t be able to tell a £70,000 Taycan from a £140,000 Turbo S works to the advantage of the new entry-level car, though it's worth pointing out the one you see here has nearly £30,000 of options on it. Audi’s E-Tron GT, which shares much with the Porsche, will prove stiffer competition but, again, in prestige terms the Taycan is still out in front.

Porsche is a performance brand and buyers will always be attracted to the quickest you can buy. But in the case of the Taycan we’d argue you might be best off saving your cash and going for the most accessible one. Fast, stylish and with the best range of any car in the range, it would be our pick! 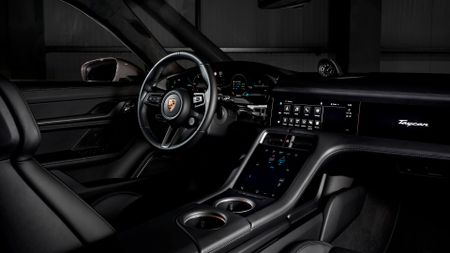