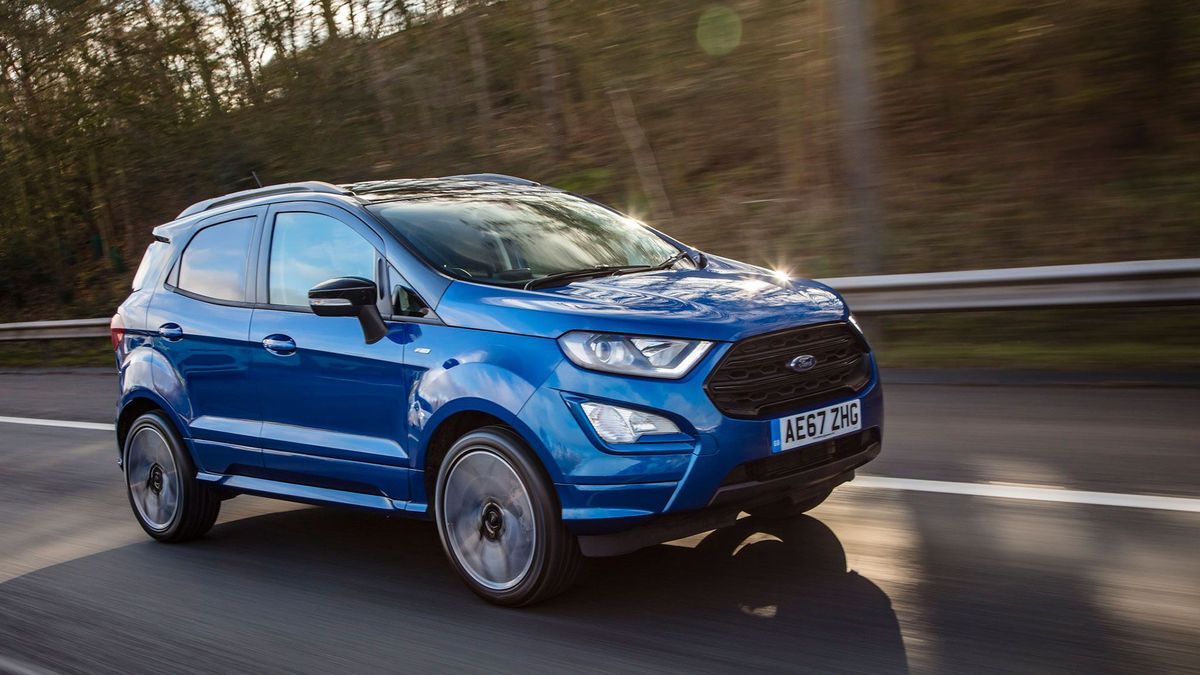 SUVs are all the rage these days, especially small, affordable ones, and the Ecosport is Ford’s offering in this highly competitive market. That pits it against countless rivals including the Nissan Juke, Renault Captur and Seat Arona, all of which are very popular indeed.

Running costs for a Ford EcoSport 2/5 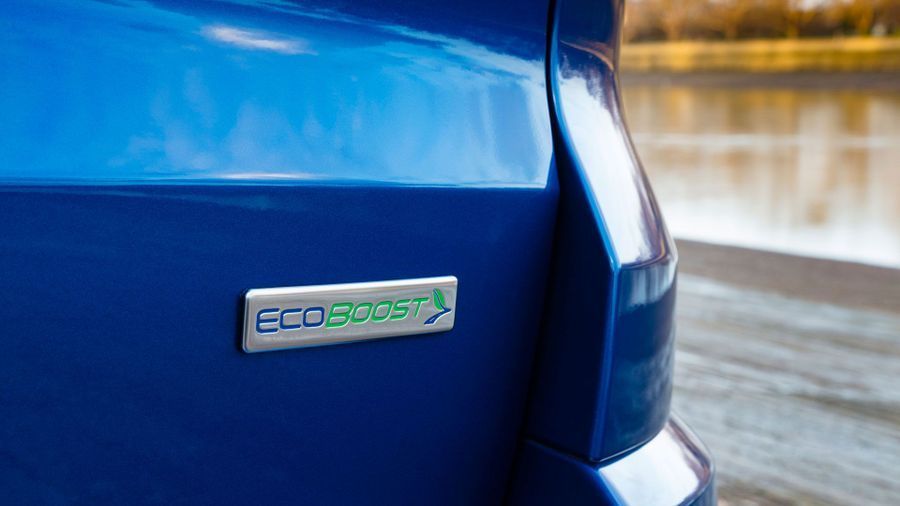 The Ecosport is reasonably competitive on price when compared to many key rivals, but it is true that there are some very desirable rivals – like the Volkswagen T-Cross and Renault Captur – that’ll cost you a bit less to buy. The Ford doesn’t hold its value quite as well as those rivals, either, and that won’t do much to help protect your investment long-term, or reduce monthly payments for finance customers. The Ford is more competitive on fuel economy and CO2 emissions, though, which will limit the amount you pay in tax or at the pumps.

Reliability of a Ford EcoSport 3/5 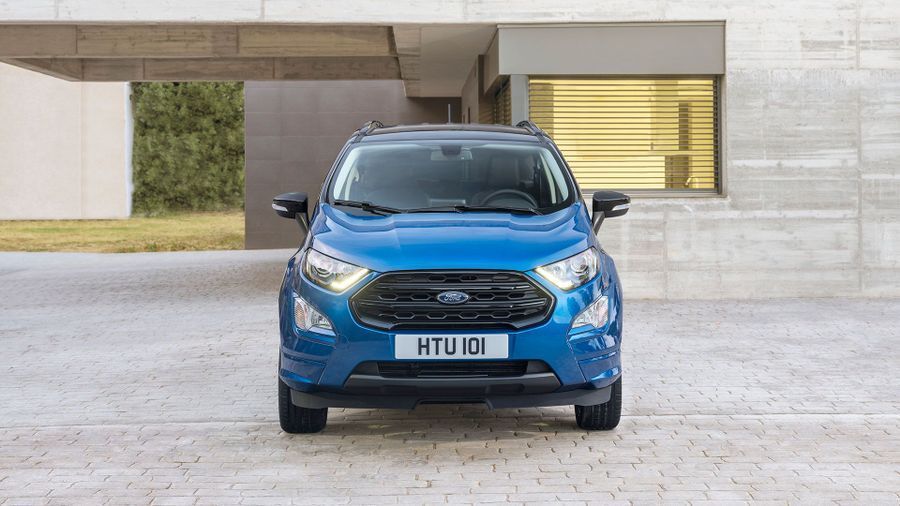 The Ecosport makes extensive use of proven technology. For instance, the engines and gearboxes are lifted from the well-established Fiesta supermini. We haven’t heard any horror stories from Fiesta buyers concerning common faults, and the car has performed well in customer satisfaction surveys and reliability studies. For example, Warranty Direct’s Reliability Index places the Fiesta (albeit the previous versions) near the top of the scale for dependability, all of which should bode well for Ecosport owners.

Safety for a Ford EcoSport 2/5 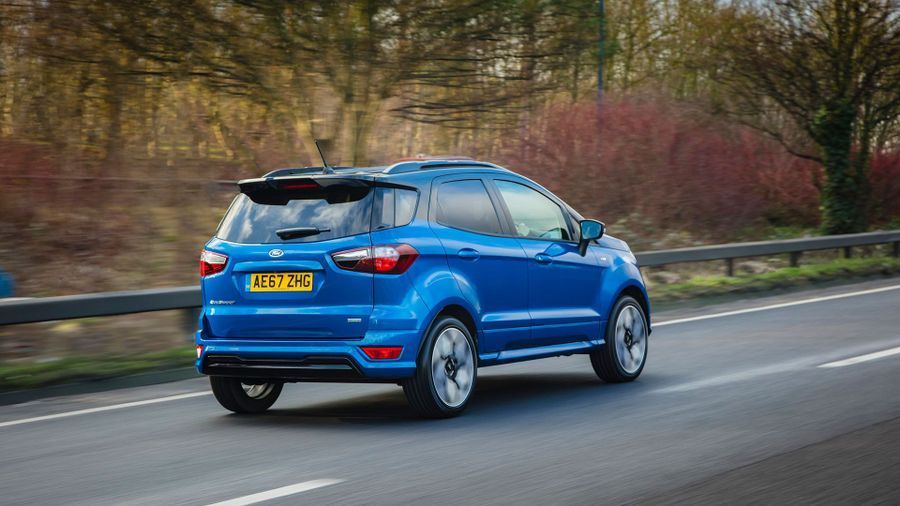 The safety kit in the latest Ecosport includes driver and passenger front airbags, a driver’s knee airbag and a pair of curtain airbags. The standard roster also includes emergency assistance call out and MyKey, a system that allows several keys to operate the car, but with various settings (such as the car’s maximum speed, the volume of the stereo and so on), uniquely programmed to each key by the owner. A blind spot assistant is available on the options list, but automatic emergency braking isn’t available, even if you’re prepared to pay extra for it.

How comfortable is the Ford EcoSport 2/5 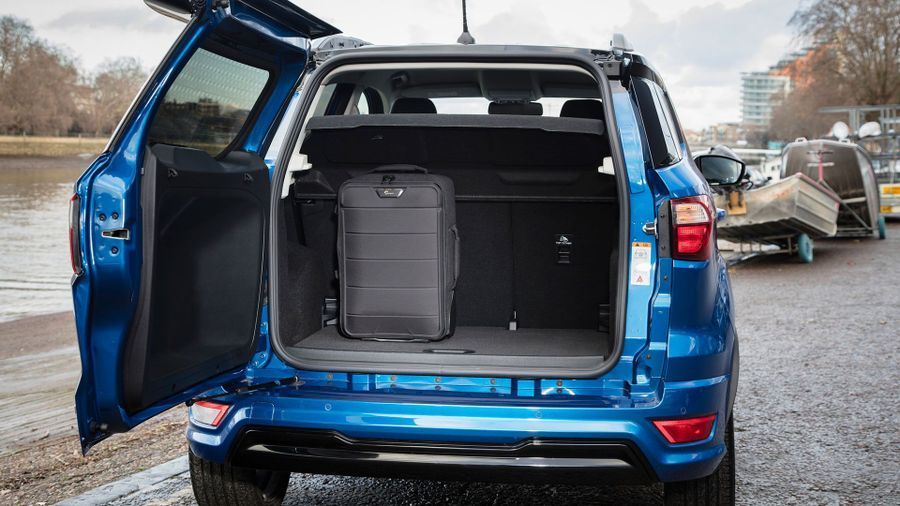 The cabin looks fairly similar to that of the latest Fiesta supermini, with big, easy-to-use controls, and a floating touch-screen that displays all the infotainment menus. There are a few tough, abrasive plastics, and some of the panels don’t fit together with the same precision as those found in a Seat Arona, but it is better for quality than the previous Ecosport.

You get a commanding view of the road ahead, but the thick windscreen pillars create quite significant blind spots, which can make it difficult to spot other cars when pulling out of junctions or when trying to join roundabouts. The steering wheel does have a decent range of adjustment, but the area around the pedals might seem a bit cramped for some drivers.

There’s a decent amount of space for four, along with the additional nicety of reclining rear seats. There’s also plenty of room under the front seats for those in the back to slide their feet underneath. In even better news, Ford has moved the old Ecosport’s rear door-mounted spare wheel to the options list, as it blotted out even more of the already limited rear visibility, and added a lump of deadweight that made opening the side-hinged rear door a real struggle.

However, the side-hinged rear door – which is designed for left-hand drive markets – remains. Fundamentally, because the door swings open towards the pavement, if you’re parked on the correct side of the road, you have to stand close to passing traffic to open it. What’s more, unless you’re able to limbo, you’ll need to find a very generous parking spot to ensure you can walk around the open door when unloading your shopping. At just 356 litres, the boot is also on the small side compared with rivals, but at least the rear seat-backs split-fold and tumble up against the backs of the front seats to boost your load-carrying options. Alternatively, you can fold the seat backs onto their corresponding cushions and use the adjustable load board to fill in the large void in the boot floor.

The Ecosport is a tall vehicle with a comparatively small footprint, and in order to prevent it from rolling around too much in corners, it has quite stiff suspension. That means you feel quite a lot of shudder when you’re just tootling up the high street, and when you go faster, bumps have an even more dramatic effect. What’s more, the stiff suspension doesn’t really help all that much with the handling anyway, because the Ecosport still feels decidedly top-heavy when you’re changing direction. That’s also the case on ST-Line models, which have an even sportier suspension setup.

We’ve driven three different versions of the Ecosport and all have displayed different levels of steering weight and feel. The overriding character common to all of them was a reasonable amount of feedback, albeit with an overly enthusiastic self-centring action. This means the steering can feel a bit too heavy when trying to hold the car steady in bends. You’ll also notice quite a bit of vibration through the steering wheel as the Ecosport’s suspension chunters over rougher surfaces, and quite a bit of tyre roar is evident at motorway speeds, but at least the weighty steering and firm suspension help the Ecosport feel secure and stable when you’re cruising.

Features of the Ford EcoSport 3/5 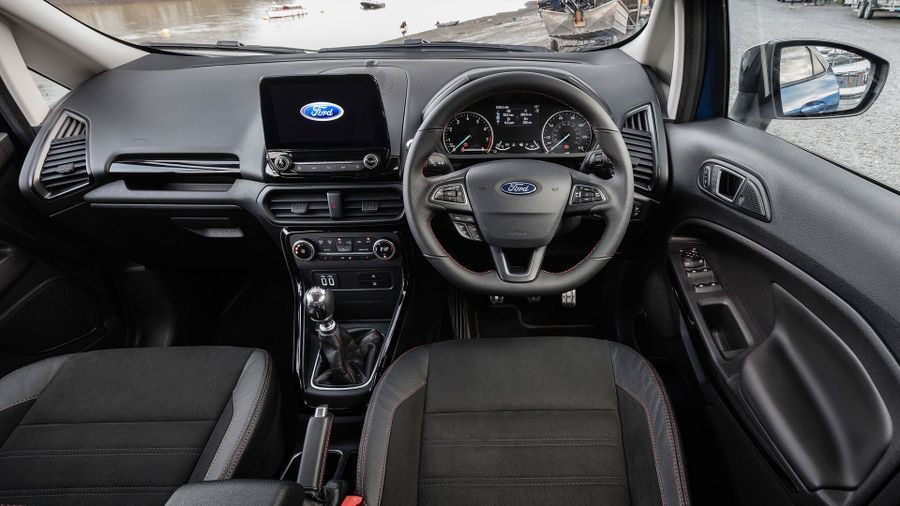 The Ecosport comes in three trim levels: Zetec, Titanium and ST Line. In our opinion, you should buy your Ecosport as cheaply as possible, as Zetec trim comes with most of the things you’ll need. These include alloy wheels, air-conditioning remote central locking, electrically-operated door mirrors and all-round electric windows. Also included is Ford’s SYNC system, which comes with DAB radio, an 8.0-inch touch-screen, Apple CarPlay, Android Auto and USB connectivity. A leather-trimmed gearknob and handbrake, and Ford’s brilliant Quickclear heated windscreen with heated washer jets, are also standard.

On top of its sports suspension, ST-Line adds plenty of visual upgrades including bespoke bumpers, side skirts and a rear roof spoiler, black-finish roof rails and contrasting coloured roof and door mirror housings.

Power for a Ford EcoSport 3/5 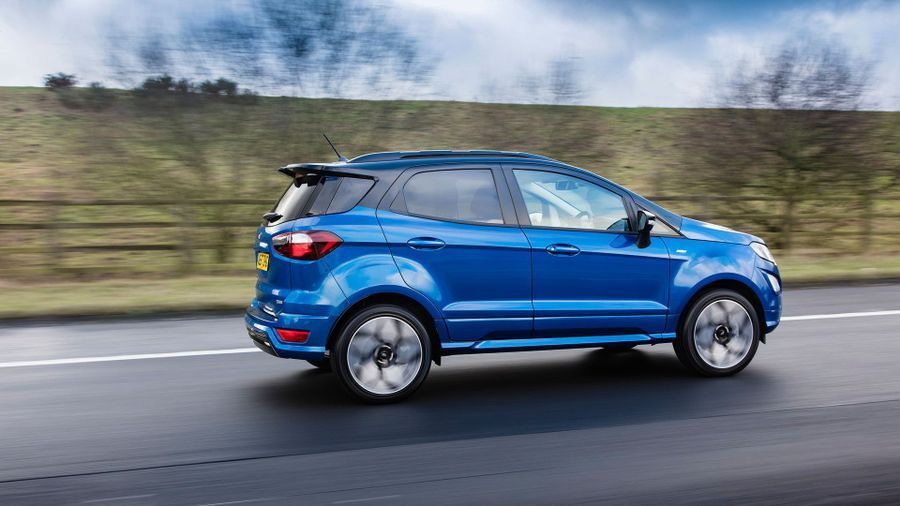 The 125 horsepower, 1.0-litre three-cylinder petrol engine is likely to be the best seller, and it’s easy to see why. It’s an incredibly flexible engine, pulling strongly from low revs, and it’s also willing to rev to dizzying heights. However, it’s not the most cultured engine you’ll ever experience. Although it’s quiet at idle, it does generate some distinct vibration, which you’ll notice pulsing through the steering wheel, pedals and through the floor as the revs climb.

This engine is also available with a six-speed automatic gearbox, but it’s not the finest example of the genre. It’s fairly slow to react to a dab of the accelerator, and it slurs slightly as it shifts between gears. What’s more, it also produces quite a pronounced shudder as it shifts down, so we’d stick with the sweet-shifting six-speed manual gearbox.

We’ve also tried the stronger 140 horsepower version of the same engine, and unsurprisingly, it’s very similar in character. Thing is, you’ll have to be concentrating pretty hard to detect any advantage in performance, so we’d save the extra money it costs to buy and stick with the less powerful version.

The Ecosport is also available with Ford’s latest 1.5-litre diesel engine. Although it’s not as cultured as it is when fitted to the Fiesta, emitting more of a hollow warble at lower revs, it’s still pretty refined and delivers strong power delivery at low and mid-range engine speeds. Consequently, it requires very few revs to get the Ecosport up to motorway cruising speed, and once it’s relaxed in top gear, you’ll struggle to tell it apart from a petrol engine. 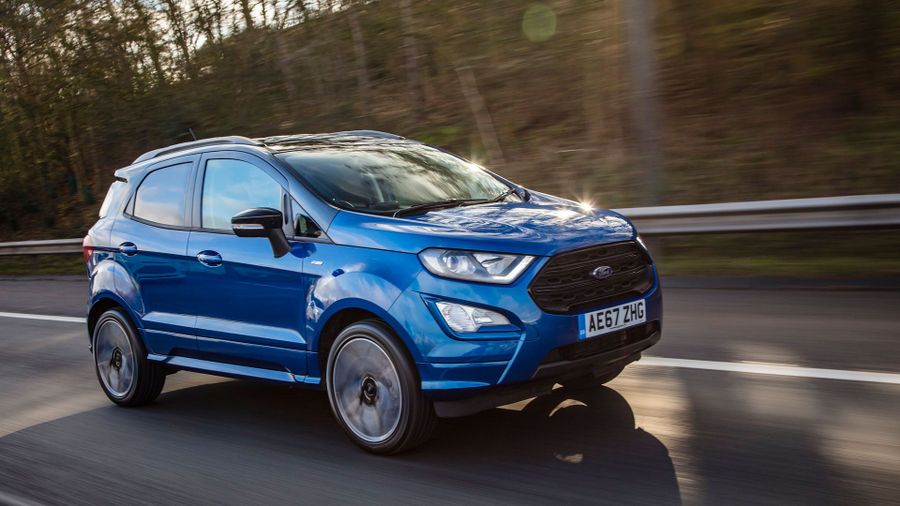