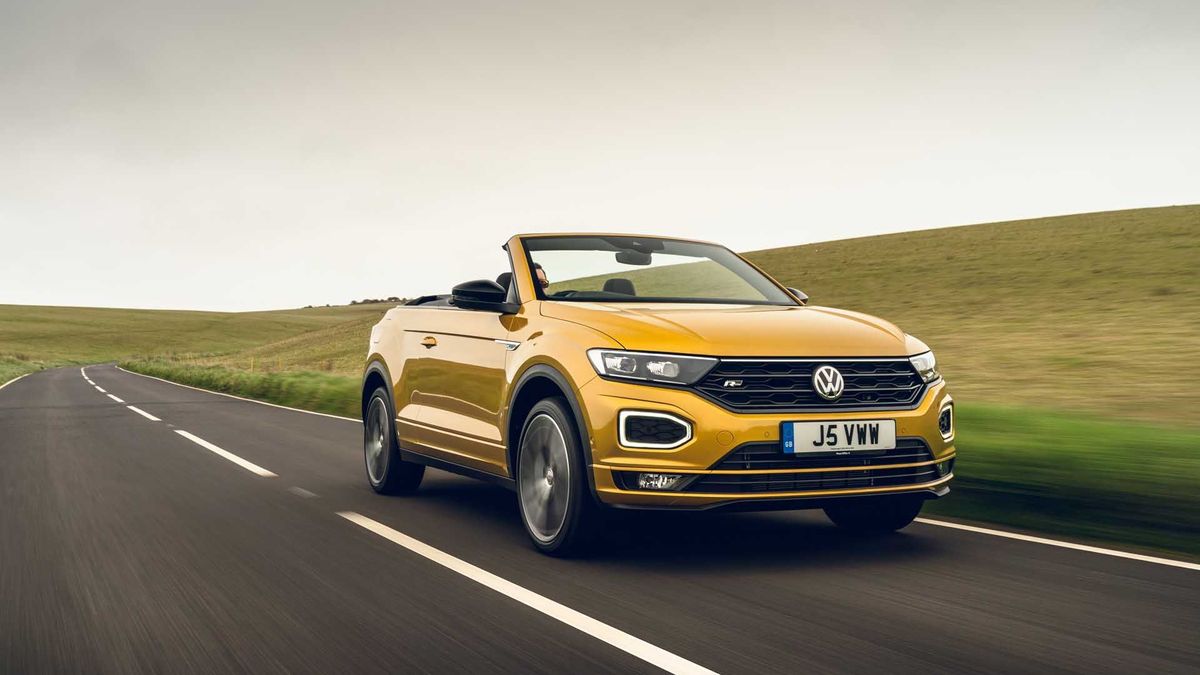 Convertibles are, by definition, bought as fun, frivolous cars and should be judged accordingly. And with its eye-catching mash-up of the previous Beetle Convertible’s spirit and modern SUV style the T-Roc Cabriolet seems in touch with modern tastes. Compromises in practicality, performance and handling are inevitable but, as a statement car for fun in the sun, the T-Roc Cabriolet is a distinctive alternative to more conventional rivals like the Audi A3 Cabriolet and BMW 2 Series Convertible.

Running costs for a Volkswagen T-Roc 3/5 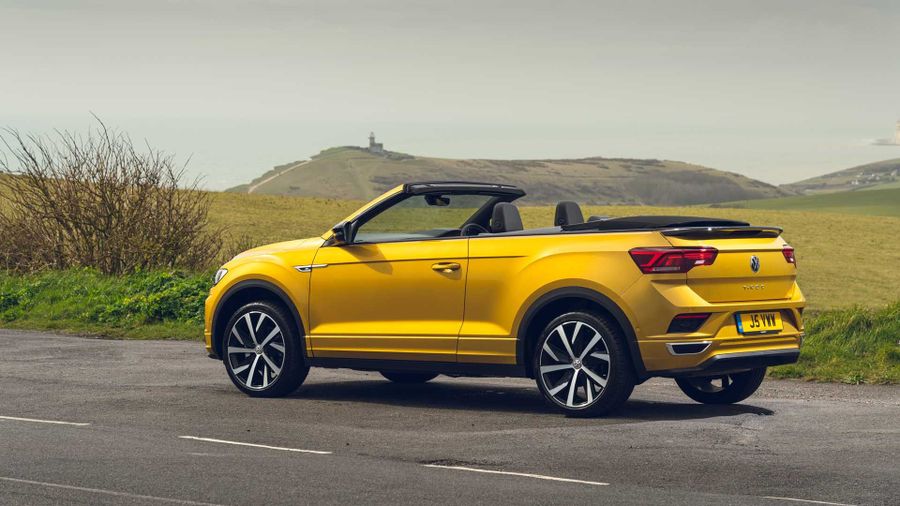 Like for like the T-Roc Cabriolet costs a significant chunk more than a regular T-Roc with an equivalent engine and trim combination. But, while they share the same badge, it’s not really a like for like comparison, given the T-Roc Cabriolet isn’t really an SUV and stands apart from the rest of the range. A replacement for the Golf and Beetle convertibles of a previous era, the T-Roc Cabriolet is a fashion conscious spin on VW’s tradition for open top four-seaters and goes against the more conventional Audi A3 Cabriolet and BMW 2 Series Convertible.

If you’re in the market for this kind of car a Mini Convertible might also be on your shopping list. The latter is smaller and cheaper than the T-Roc, the Volkswagen priced more or less on a par with equivalent versions of the Audi and BMW. Likely bought with the heart rather than the head, running costs for a car like this aren’t likely to be too high on the list of concerns. But we were impressed at the 40mpg or so we got in mixed driving with the 1.5-litre petrol, given that pretty much matches the official figures.

Reliability of a Volkswagen T-Roc 3/5 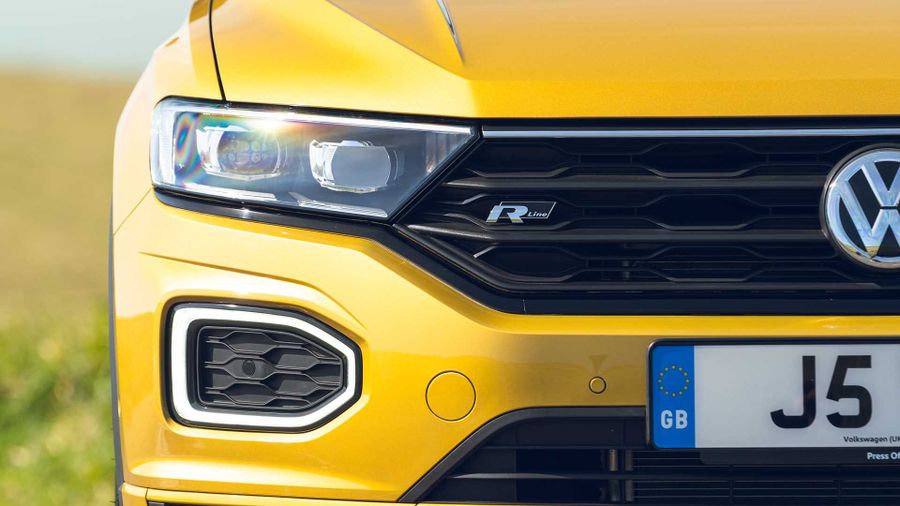 A slightly above average position in the reputable JD Power Vehicle Dependability Study offers reasonable reassurance in the reliability of Volkswagen products across the board, and the T-Roc Cabriolet shares most of its engine and other components with various other models in the VW, Audi, Skoda and Seat ranges so it’s all proven kit. The power folding roof adds a level of complexity not present in regular T-Rocs but Volkswagen has a long history of making such cars and, at least while the T-Roc is new, it shouldn’t cause any worries.

Safety for a Volkswagen T-Roc 3/5 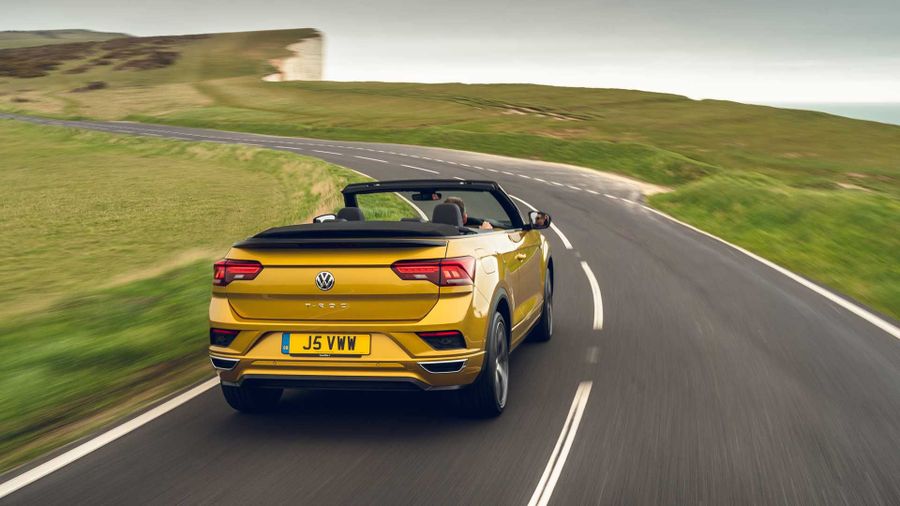 All T-Roc Cabriolets feature radar-monitored cruise control that can automatically maintain a safe distance to the car in front to take the stress out of motorway driving. At lower speeds these sensors also scan the road ahead for pedestrians and other hazards and can apply the brakes automatically if you fail to react in time. Front and rear parking sensors are also standard, which is handy given how poor the visibility is. Pop-up rollover protection is also fitted should the worst happen there. An optional Driver Assistance Pack Plus is also available and increases the scope of the support systems, with blind spot warnings, intervention if it thinks the driver has become incapacitated and active lane-keeping. A ‘pre-crash’ preparation system and automated parking are also optional.

How comfortable is the Volkswagen T-Roc 2/5 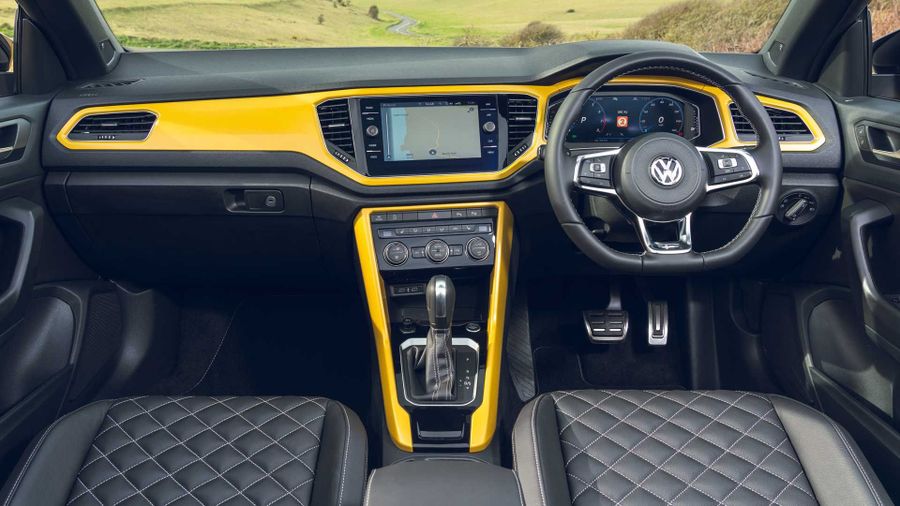 For the two up front the T-Roc Cabriolet offers plenty of space and a comfortable, stylish cabin. In the rear it’s a little more cramped, despite the car being longer in the wheelbase than a standard T-Roc. There are only two rear seats and the tall sides make it feel a little like you’re sitting in a bucket, a prominent reinforcement tunnel between the seats accentuating the sensation, though it’s feasible for four adults to travel in reasonable comfort. There’s an impressive lack of turbulence with the roof down, even at motorway speeds. You can add an optional clip-in wind deflector but this covers the rear passenger compartment, effectively turning the car into a two-seater.

The idea of a convertible SUV riffs on current fashions but brings with it considerable practical and dynamic compromises. The T-Roc Cabriolet we tested had the optional adjustable suspension but, on its 19-inch wheels, crashed and thumped over the bumps even in its supposed comfort setting, sending unsettling shudders through the car’s structure. This isn’t unusual on convertibles but isn’t especially pleasant – the smaller wheels on the base model will likely offer more cushioning, though they don’t look as fancy.

While it would be unreasonable to expect the practicality of a regular T-Roc there are also significant compromises here. The boot is a decent size and quite deep but the opening is narrow and, although the seats fold, the space freed up doing so isn’t especially useful. The boot closing mechanism also requires a hefty slam to latch properly – more often than not we had to get out and try again, even when we thought we’d shut it properly.

Features of the Volkswagen T-Roc 3/5 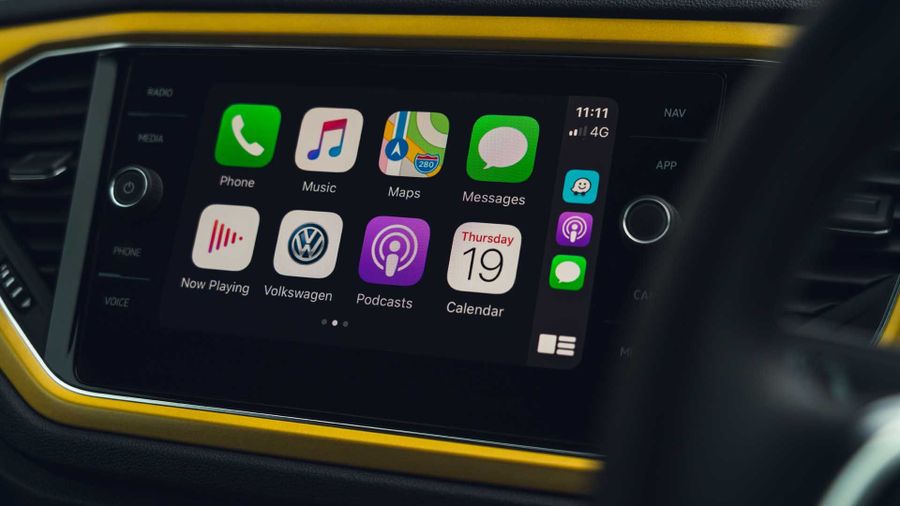 The T-Roc Cabriolet features VW’s latest generation of touch-screen controlled infotainment, with a clean, button-free interface and slick graphics. It can be hard to see the screen with the roof down on a sunny day and we found the navigation a little slow to load up and occasionally dim-witted, getting muddled at one major motorway intersection and nearly costing us an unwanted trip down the M6 Toll. At least the configurable Active Info Display (optional on the entry model, standard elsewhere) can put the information you need out of the sun’s glare and into the instrument binnacle.

If you’d rather put your faith in your phone apps you can, thankfully, connect your handheld device, wirelessly in the case of Apple CarPlay or via a cable if you’re using Android Auto and have the necessary adaptor for the USB-C port. Connected services are also available from VW and included as standard if you want to fully integrate your life with the car via your phone.

Power for a Volkswagen T-Roc 2/5 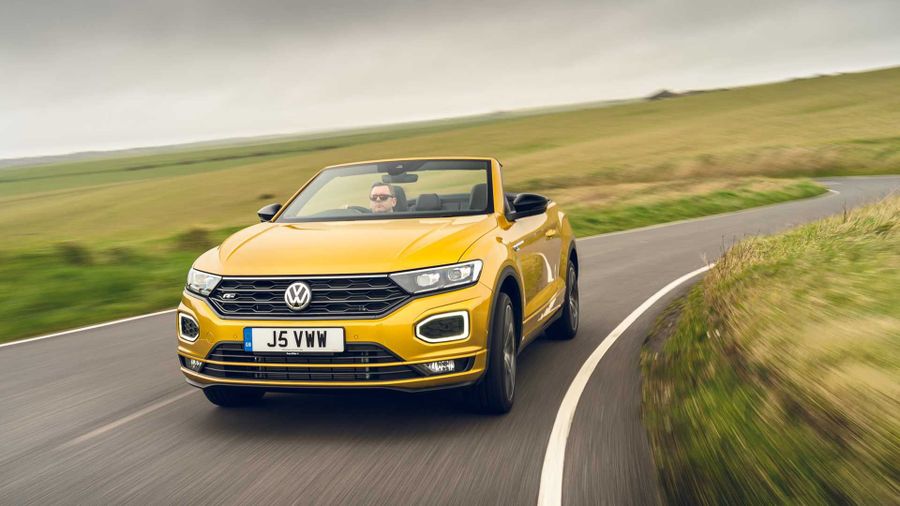 There are only two engine choices for the T-Roc Cabriolet, both petrols and offered with a standard manual gearbox or optional seven-speed ‘dual-clutch’ style DSG automatic. Bear in mind that while it may look like an SUV the T-Roc Cabriolet is only two-wheel drive, so don’t kid yourself it’ll cope with any off-road action. Not that many owners would likely try.

Our test car came with the more powerful 1.5-litre engine, which has 150 horsepower. It is smooth, refined and impressively economical but struggles against the weight of the car and it never feels especially sprightly. The automatic gearbox in our test car also held onto the gears, leaving the engine screaming at times and feeling rather breathless. We’ve not driven the less powerful 1.0-litre version but the numbers indicate it will feel even more lethargic (it’s over two seconds slower 0-62mph) and there’s little benefit in fuel consumption or CO2, either. Given that, the 1.5-litre looks the safer bet on all counts. 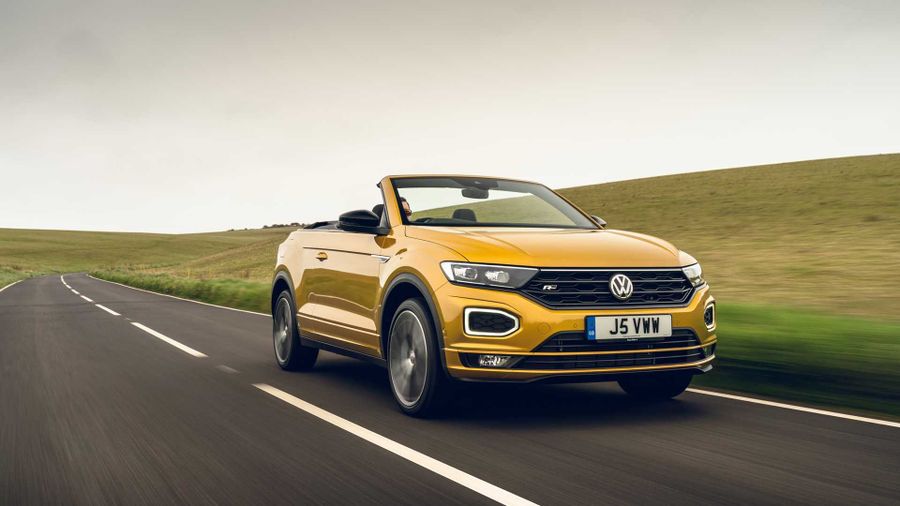