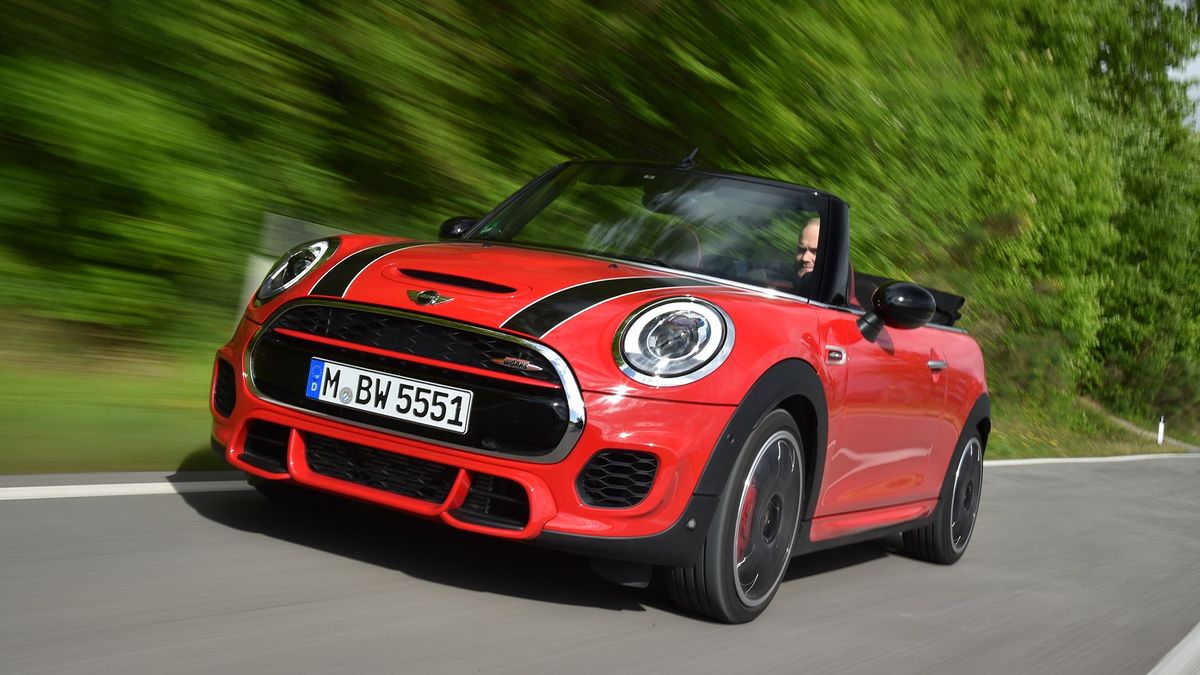 First published: 3rd May 2016
Share on Facebook on Twitter
Auto Trader verdict:
The Mini Convertible is the UK’s favourite soft-top, but the JCW version is likely to sell in very low volumes, so if you do take the plunge, at least you’ll be keeping some pretty exclusive company. That aside, however, we struggle to justify the premium over other open-top Minis. Yes, the JCW is quick; yes, it’s a hoot on the right roads; and, yes, it looks and sounds great. Trouble is, you can say much the same about the less powerful, more affordable, more comfortable versions.
Need to know:
What is it?
As much as we prefer the driving characteristics of hatchback Minis, even we would concede that the Convertible fits perfectly with most Mini-buyers’ aspirations; adding head-in-the-stars freedom and look-at-me glamour to the Mini’s ‘absolutely fabulous’ retro styling.

All well and good, but the problems associated with chopping the top off a Mini are manifold, given the amount of added bracing material that’s needed to reinforce the body and prevent things from turning to jelly every time you encounter a bump in the road.

This engineering headache becomes even more of a migraine when dealing with the JCW version because by definition it needs stiffer springs and dampers to sharpen up the reactions and agility, and justify its ‘most sporting Mini’ tag. Yep, you’re already way ahead of us; ever stiffer suspension means ever bigger shakes.

At least this new JCW has got a fighting chance, as it's based on the latest Mini platform, which is longer and stronger and less prone to shake than the previous Minis.

Enough of the physics for now, though.

As we mentioned, most folk will be as concerned about the looks and the trinkets as much as the mojo; and, to this end, the JCW doesn’t disappoint.

While there's lots of sparkly chrome around the lights, and additional grilles abound, a JCW body kit, bespoke alloy wheels, twin bonnet stripes, a lowered ride height and beefier Brembo brakes all help mark the JCW from its humbler siblings.

Additionally, if you really want to bang home the visual assault, you can option a Union Jack design to be printed on the cloth roof, or even specify puddle lights that project the Mini logo onto the ground from beneath the exterior rear-view mirrors. 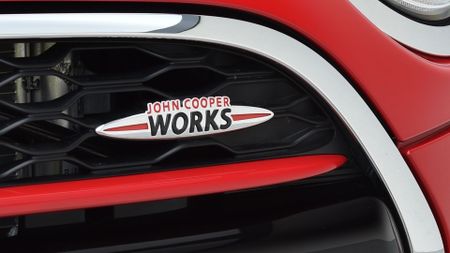 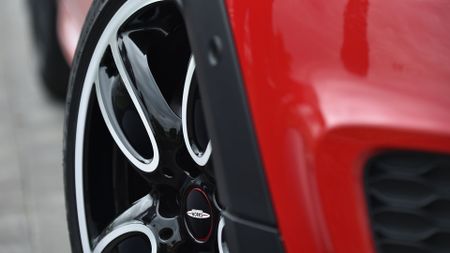 View gallery
What's it like?
Make no mistake, the JCW is emphatically superior to stylistic rag-top rivals such as the Fiat 500 Abarth and DS 3 Competition; but, despite all Mini's hard work, the JCW still struggles to isolate the driver from bump-induced shake.

You’ll notice how we place the emphasis on the driver rather than the occupants. That’s because, unlike the passengers, the driver is directly connected to the tell-tale touch points. Holding onto the steering wheel and gazing into the rear-view mirror, it’s impossible not to be perturbed by the oscillating shake transmitted through the steering column and the rear view mirror’s manic, marionette dancing routine.

That said, albeit to a lesser degree, everyone on board will experience some negative effects, as various bits of trim and window-roof seal interfaces squeak and rattle with relentless monotony when driving on coarser surfaces. Granted, the majority of our test drive took place over some particularly prickly Italian back roads, but we strongly suspect that the JCW will perform similarly on battered UK Tarmac.

Collywobbles aside, though, the JCW seldom fails to raise a smile when driven spiritedly.

With loads of punch developed by the 2.0-litre turbo engine and a well-managed power delivery, the performance feels right on the edge of what a well-sorted front-wheel-drive motor can handle before blue smoking tyres and manic torque steer ensue. 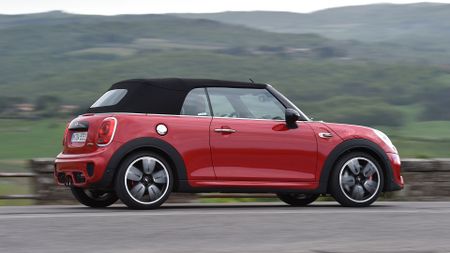 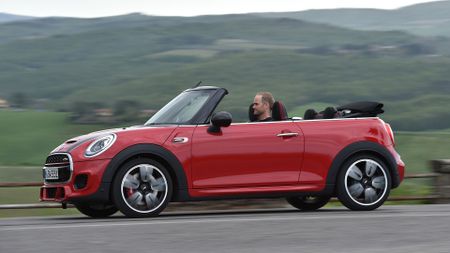 View gallery
Snookered behind lengthy processions of ambling traffic, the JCW repeatedly earned its stripes as a proper overtaking weapon. With a fat slab of torque, a barking sports exhaust and a real willingness to rev long and hard, a dexterous flash across the chunky gearshift gate and a firm jab of the stainless go-go pedal was all that was required to bullet past parades of post-pasta Florentines.

Despite the shakes, there’s still oodles of grip, and the speed of the car's reactions - if diluted somewhat by the rag top’s lack of stiffness - remain typically Mini. That said, some steering feel compared to the hatchback has been lost in translation.

Even so, we’d be over the moon if the brakes were anywhere near as feelsome. Fitted with so-called ‘specialist’ Brembo stoppers, the pedal feel is nothing short of woeful. Soft and spongy on initial activation, this compliance quickly gives way to a solid lump of resistance, which delivers zero bite; so much so, in fact, that you often feel like an impassive observer as the car slows, rather than an active participant.

A couple of additional black spots - or blind spots, rather - can be levelled at the JCW’s roof. When folded onto the boot lid it reduces the rear view to letter box proportions. And, when up, the dark expanse of roof fabric all but obliterates over-the-shoulder visibility. What’s more, although the roof is electrically powered and takes a reasonable 18 seconds to go up or down, it can only be operated at speeds up to 18mph, which is roughly half the velocity that an Audi A3 Cabriolet’s roof can be operated at. 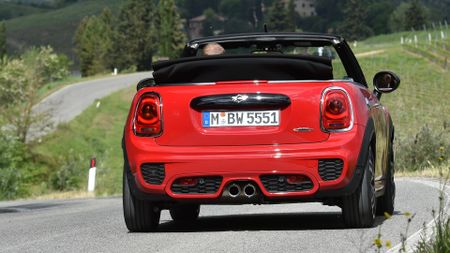 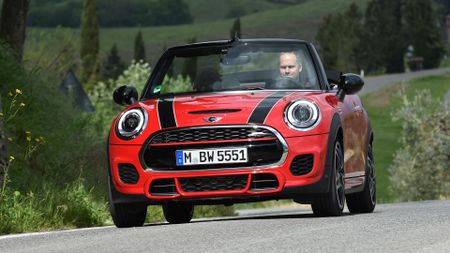 View gallery
Should I get one?
Regardless of anything we say, some folk will always be drawn to the shiniest and most expensive knickknacks in the toy shop; and, with a starting price of £26,630 and 228bhp under the bonnet, the John Cooper Works certainly fulfils those criteria

Question is; is it worth the premium over humbler Mini Convertibles? Well, for us, it's very much a case of ‘all that glitters certainly isn’t gold’.

Yes, the JCW is super-quick; and, yes, it’s an absolute riot on the right roads, but living with the high levels of shake that quake through the cabin on less-than-perfect surfaces would drive us to distraction. So, unless you’re obsessed with the idea of owning the most expensive Mini, we’d point you in the direction of the softer, less expensive models and reserve the JCW approach for the more capable hatchbacks.
Key facts:
Also consider:
Mazda MX-5
The iconic two-seater is a properly sorted wind-in-the hair sports car

Audi A3 cabriolet
A bigger, more comfortable option, with strong performance and room for four adults 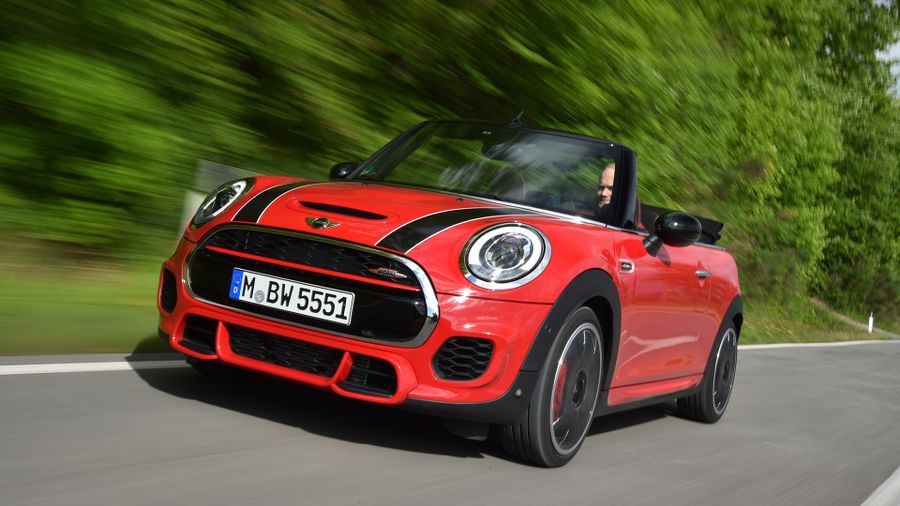