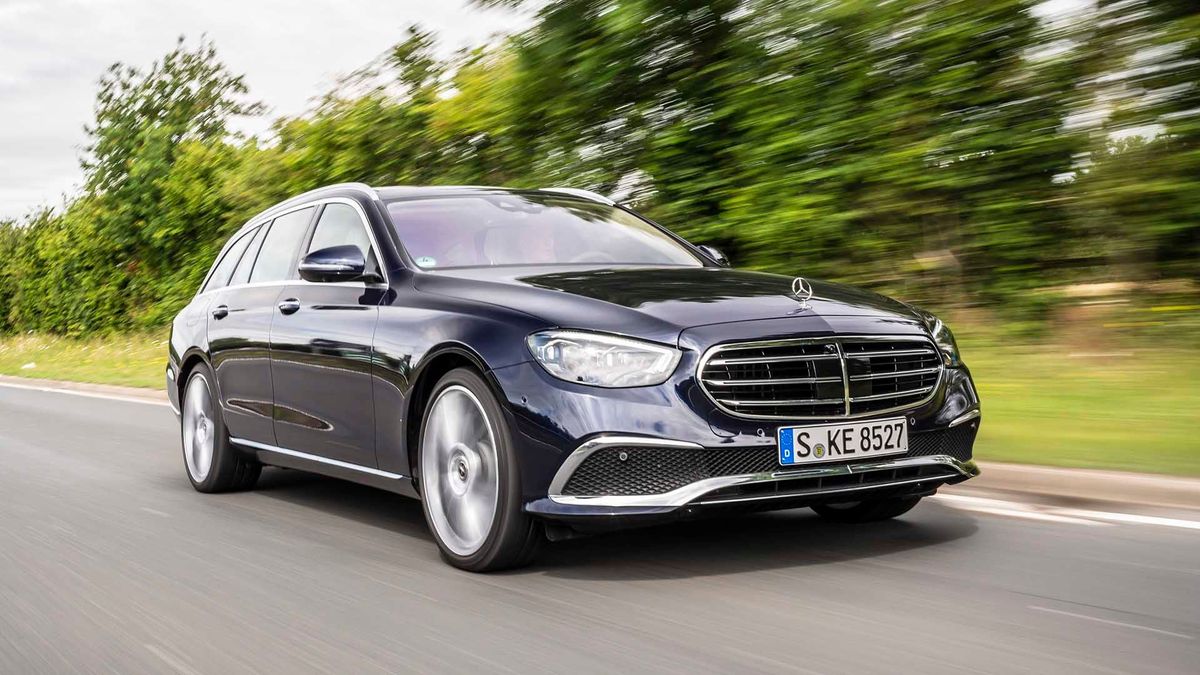 Endless variations on the SUV theme may have captured the hearts of family buyers at all levels of the market but it’s good to see Mercedes standing by its more traditional models, like the E-Class estate. For this mid-life update it’s tweaked the styling in the usual way, added a new engine and increased the tech, all of which adds further appeal to what was already the thinking driver’s choice of luxurious, practical family car. 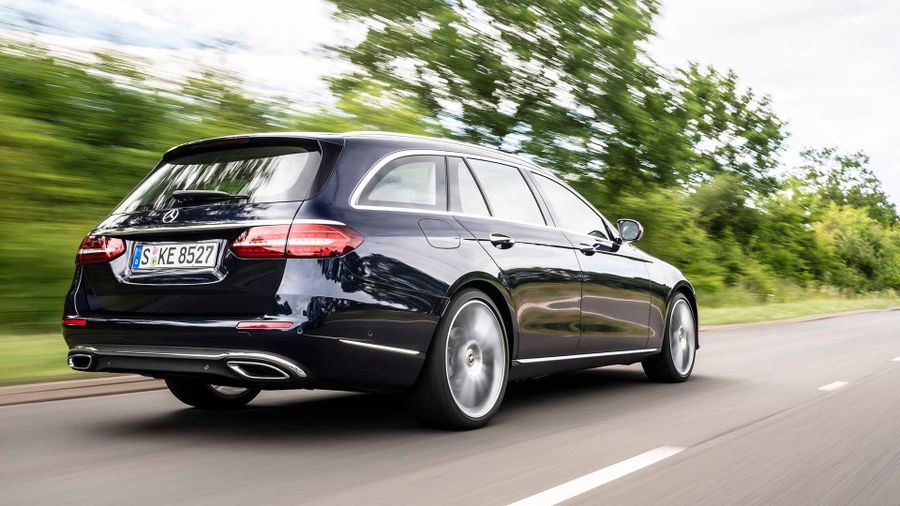 The entry price to the E-Class range is on a par with its main rivals, the BMW 5 Series Touring, Audi A6 Avant and XF Sportbrake. Beyond that you simply choose whether you want petrol, diesel or hybrid and how fast and luxurious you want it to be.

If the answer to the last two is ‘very’ you have the option of the high-performance E63 S version from Mercedes’ AMG division, weighing in at just shy of £100,000. Or you can spend less than half that on a more sensible model, with options ranging all the way between and including the quirky All-Terrain variant, which is now apparently ‘more SUV’ than before.

E-Class estates are popular with families and company drivers alike. Little surprise Mercedes accommodates the latter with a choice of affordable four-cylinder petrols and diesels (good on purchase price and P11D value) and plug-in hybrid versions of both if saving on Benefit In Kind is a priority. The hybrids cost as much as £10,000 more like for like but you could easily claw that back in tax savings, if the numbers work for you.

Given the above fuel consumption is likely less of a consideration, though if you’re really covering the miles the E220d’s 50mpg-plus will likely score nearly as well in the real world against the idealised triple-digit claims of the hybrids. 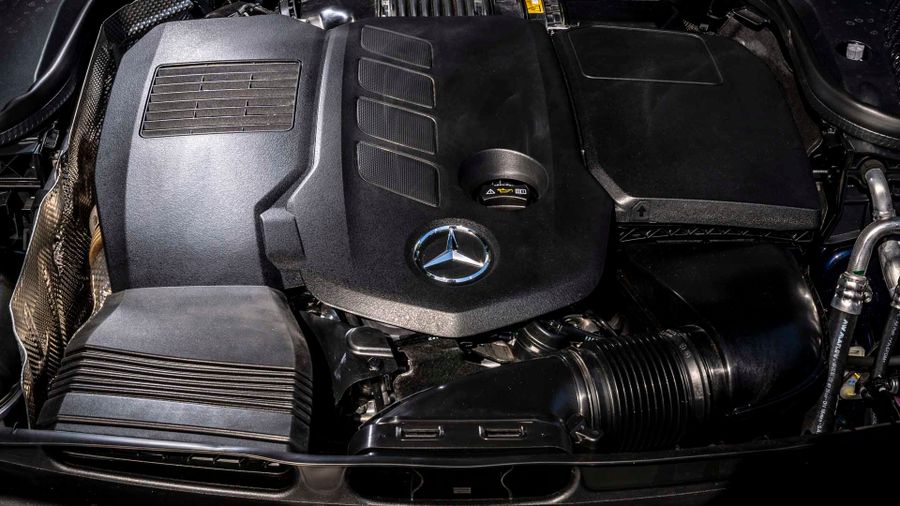 Traditionally speaking Mercedes-Benz has a long-standing reputation for quality and reliability, even if that has taken a bit of a knock in recent years. Like many premium brands, it sits lower than you might hope in the rankings for respected reliability indexes like the JD Power Vehicle Dependability Study. It is, at least, ahead of its nearest rivals like Jaguar, Audi and BMW, though. Owners love their E-Classes too, which is reassuring. Indeed, in the 2019 Auto Trader New Car Awards you nominated it as your Most Recommended Car, the improvements for this facelifted generation sweetening the pill further. The E-Class is a multiple award winner, too, triumphing as 2017 Best Car For Families in the 2017 Auto Trader New Car Awards and one of our long-standing favourites in the estate car category.

Safety for a Mercedes-Benz E Class 4/5 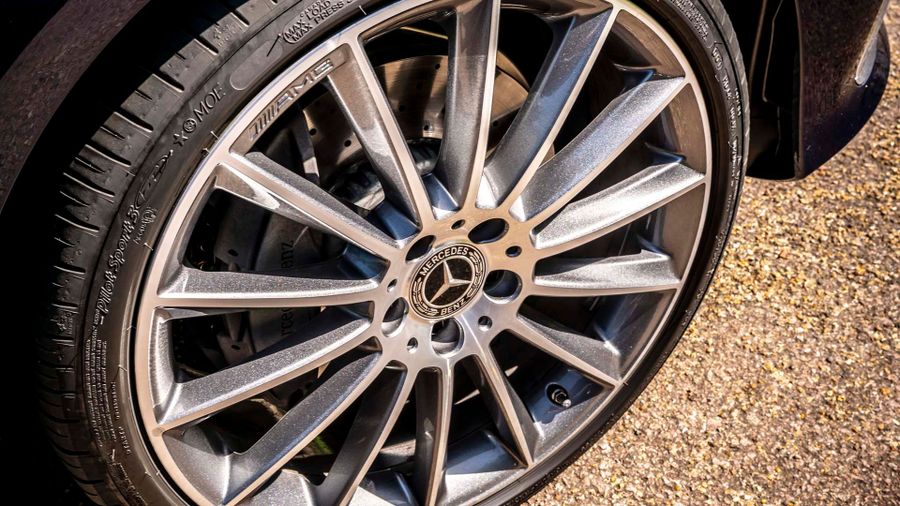 Safety is a big deal for Mercedes and all its cars are built to protect you and your family should the worst happen. But the brand would prefer that doesn’t occur in the first place and puts great emphasis on its driver assistance technology, which has been updated for this new E-Class. As standard the car will use sensors to park itself, can apply the brakes automatically if it detects a hazard, alerts you to unseen vehicles in your blindspot, will tell you if it thinks you’re getting drowsy and need a break, displays speed limit info from road signs in the instrument cluster and can even prepare the car for an anticipated shunt to mitigate injury. A new steering wheel can detect any attempts to drive ‘hands off’ and scold you accordingly, tempting as it might be to try and play the systems.

LED headlights are also now standard, uprated to fancier ‘intelligent’ ones on more expensive models. The next-level assistance systems are, however, exclusive to the top of the range models and, even then, as a cost-option package. A folding tow-hook is available for the estate and, whatever you’re towing, automatically adapts the car’s stability control to counteract swaying when in use. 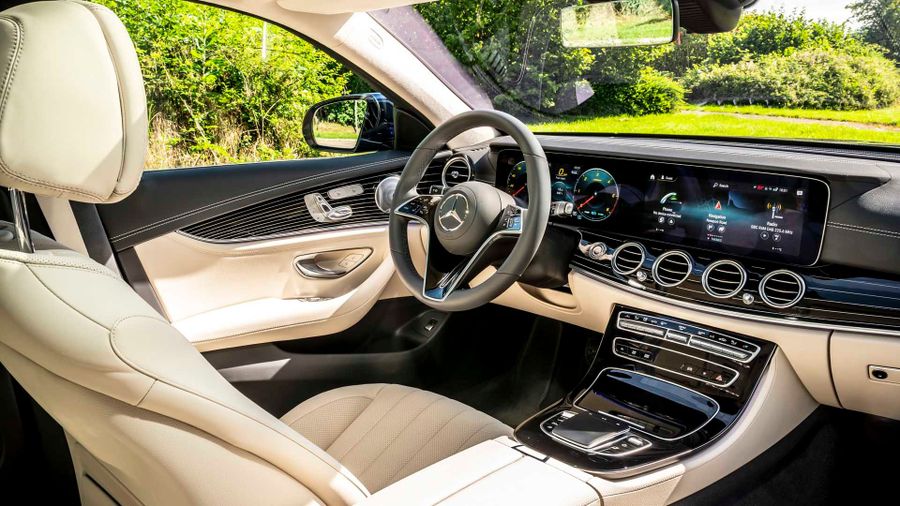 In a word, sumptuous. Among rivals Audi is a master of cool, modern tech and BMW puts a nice contemporary twist on traditional luxury. But Mercedes is in a class of its own with its interiors and the moment you open the door of the E-Class it looks and feels opulent and cossetting. Leather is standard on all models, the hide used on fancier ones feeling expensively soft and supple as you park your behind on the seat. If you really want to treat yourself an ‘Energising Comfort Package’ offers massages of varying intensity and integrated settings for heating and ventilation to stimulate or relax as the mood takes you, complemented by a choice of 64 shades of ambient lighting effects. The overall refinement of the car is also very, very impressive and helps the miles fly by.

Obviously, you buy an estate for practicality and the space behind the standard powered tailgate is suitably vast and deep, even if the opening is narrower than its SUV brothers like the GLE. There’s additional storage – and a handy folding shopping crate – under the floor, though. If there’s one criticism it’s that it all feels a little too posh for loading up with garden waste on the tip run, muddy dogs, bikes and other kiddie gear.

We tested three German-market versions of the new E-Class and all were fitted with the optional Air Body Control air suspension, which is excellent but – bizarrely – unavailable on UK cars. This is a shame on two counts, first being we can’t report on how E-Classes sold here will ride our roads and second because the versions we did drive were exceptionally comfortable thanks to this system. The Air Body Control is standard on the E53 and E63 AMG models, though it’s configured differently in keeping with the performance these cars offer so isn’t representative of standard E-Classes. Watch this space and we’ll report back as soon as we’ve had a chance to drive the standard car on its regular ‘Agility Control’ suspension. 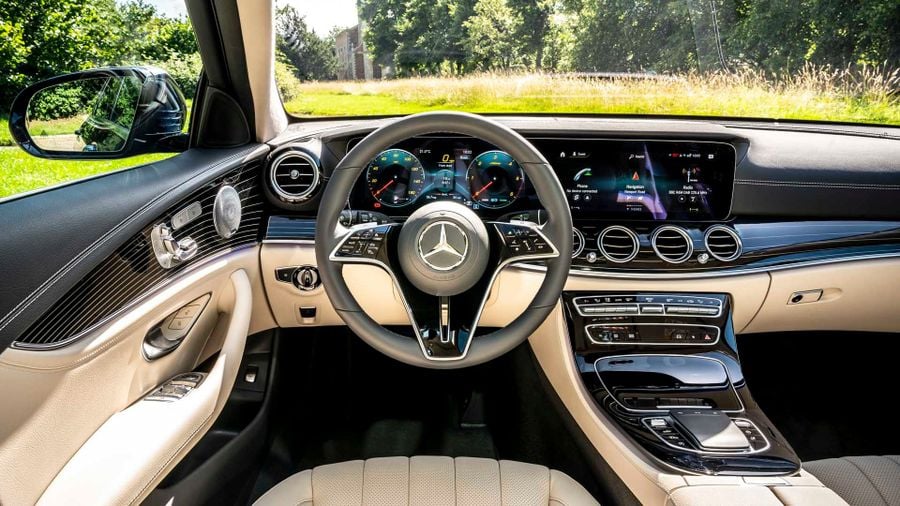 Mercedes has really pushed ahead with technology in its recent models, this updated E-Class expanding on what was already a class-leading set-up with its expansive ‘widescreen’ combination of two 12.3-inch displays. The one in front of you is endlessly configurable to show various combinations of driving information – including navigation – while the central one can manage your communication and entertainment. Or anything else. You can control it all via touch-sensitive pads on the steering wheel, a fiddly control pad between the seats (tricky unless you’re left-handed) or through voice via Mercedes’ ‘MBUX’ interface. Assuming you can get over the social awkwardness of saying ‘Hey, Mercedes!’ each time you do so.

The graphics and presentation are all top of the class, though some – Volvo’s for instance – are quicker to learn and navigate around. It all adds to the classy ambience, though.

In terms of equipment even the entry-level model gets wireless charging for compatible devices, LED headlights and heated seats while extra features like 360-degree parking cameras and augmented reality navigation overlaying real-time video of the road ahead with animated arrows are also included. From the more sombre vibe of entry level models the trim and materials become steadily more opulent as you progress up the range, too. 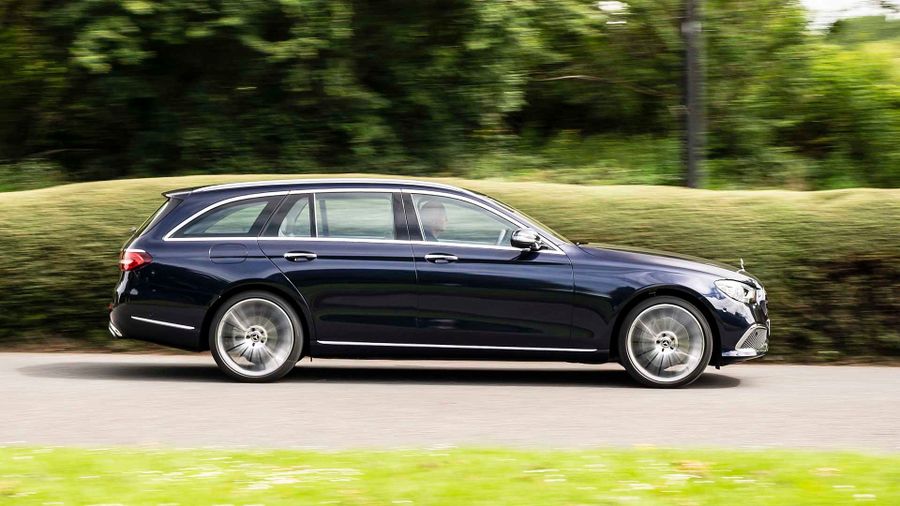 With engines ranging from a 194 horsepower four-cylinder to a 603 horsepower twin-turbocharged V8, and including plug-in hybrid options along the way, you’re certainly not stuck for choice with the E-Class. All drive through a nine-speed automatic gearbox of one sort or another, with ‘4Matic’ all-wheel drive available on more powerful versions.

This new model introduces a new generation of four-cylinder petrol engines, gaining what’s known as ‘mild’ hybrid assistance from a belt-driven starter motor/generator for improved start-stop performance and a discreet electric boost. There are also plug-in hybrid options with both petrol and diesel engines – we tested the E300e and, while there’s less control over the power source than in other similar systems, it shifts seamlessly between petrol, pure electric and a combination of the two. It’s both powerful and refined, too.

Diesels are less en vogue these days but, either side of the diesel hybrid, you have the choice of a four-cylinder E220d or six-cylinder E400d with 4Matic all-wheel drive. This is a powerful and refined choice, and great for towing.

AMG is Mercedes’ performance wing and offers two levels, starting with the 429 horsepower, six-cylinder E53 S. That’s more than enough for most people but, for real power junkies, there’s also the truly monstrous E63 S with a thunderous, 603 horsepower V8 engine and rear-wheel drive ‘Drift Mode’ if you really want to scare yourself. Just make sure your Labradors are well restrained in the boot before you deploy all that power. 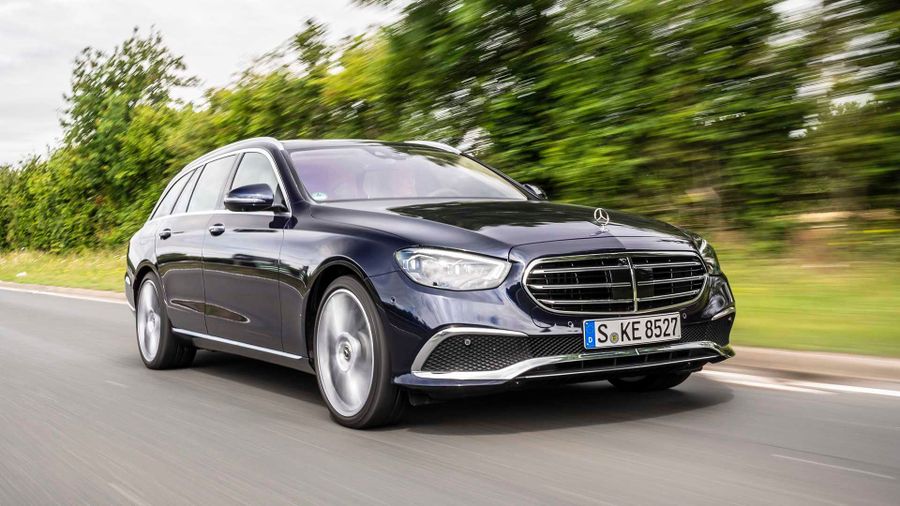