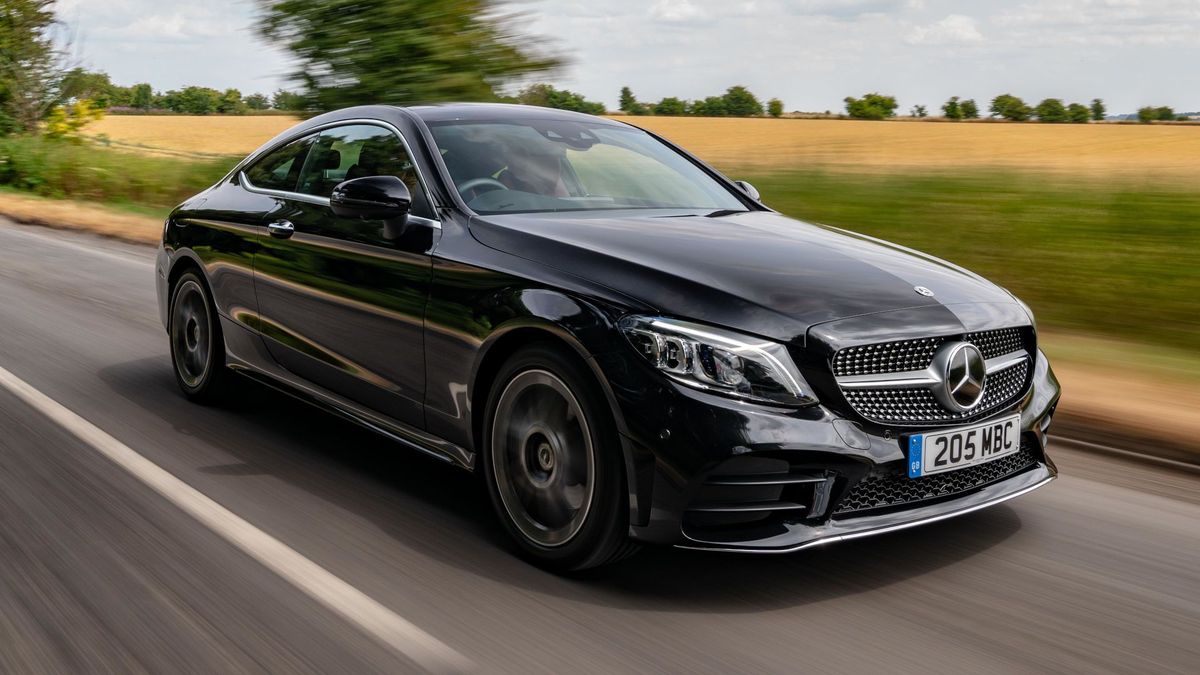 The Mercedes C-Class Coupe brings swish looks, a classy interior and loads of standard equipment to the prestige coupe party. It also comes with heaps of safety kit, and efficient diesels that mean it’s affordable to run. So does it have the legs on its biggest rivals, the BMW 4 Series Coupe and Audi A5? 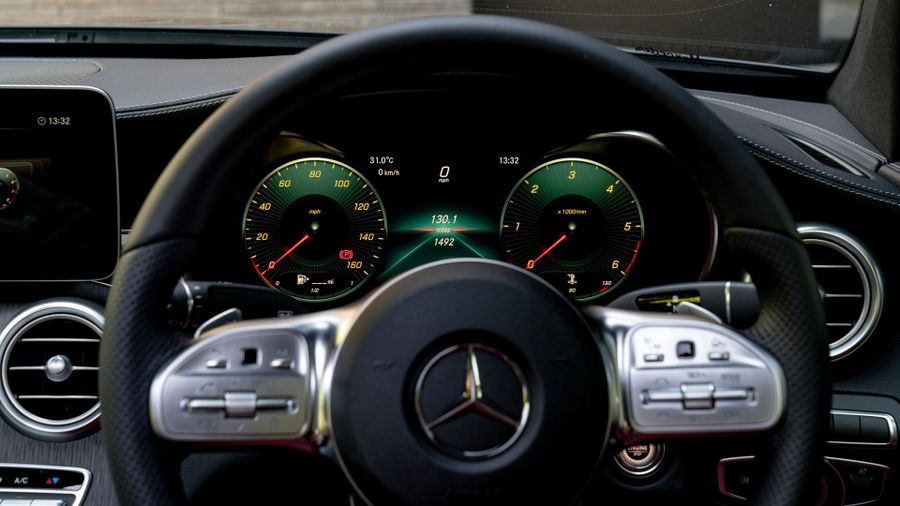 List prices for the C-Class Coupe are much-of-a-muchness when compared with the equivalent sporty versions of rivals from Audi and BMW, but bear in mind that these rivals are also available is more humble, more affordable trim levels, meaning they’ll be easier to stretch to if you’re not fussed about having the sportiest option going.

Running costs are also very similar between the three when compared like-for-like, with similar figures posted for fuel economy, CO2 emissions, insurance groupings and resale values. All this means that if you’re torn between the Merc and one – or both – of its main rivals, the financial aspect is unlikely to be the thing that sways your decision. 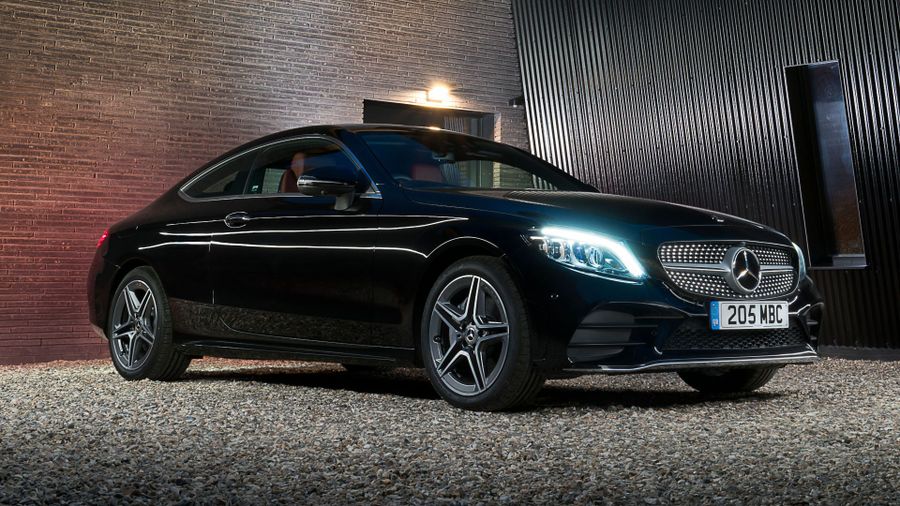 Safety for a Mercedes-Benz C Class 5/5 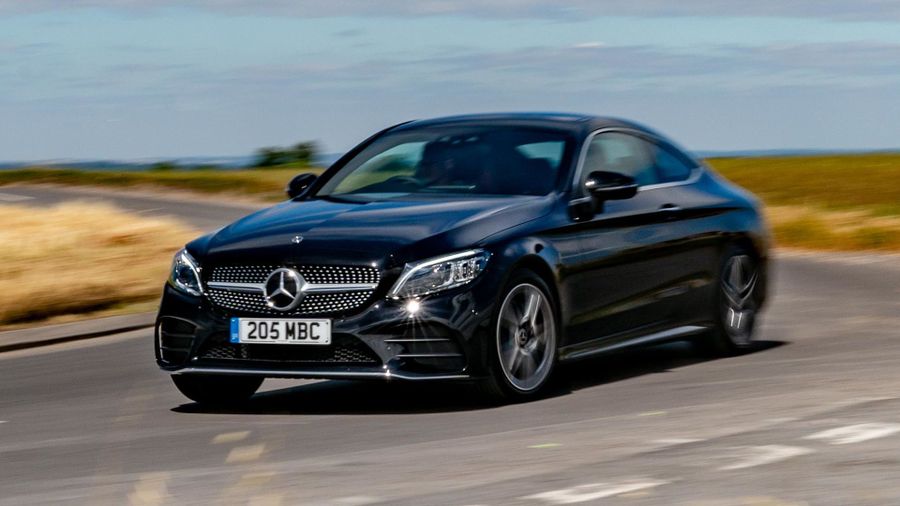 The airbag total is good, with seven fitted to various bits of the car, including a knee airbag to protect the driver’s legs against damage from the steering column in the event of an accident. You also get a collision prevention system is standard, which includes automatic emergency braking, but the really clever stuff comes as part of a pricey option package called the Driving Assistance Pack.

It features technology that’s cascaded down from the S-Class luxury saloon, and includes a clever cruise control system that will slow the car for junctions, roundabouts and bends, as well as reacting to speed limit changes, and it’s joined by systems that will keep the car within its lane if the driver starts to wander around, actively prevent it changing lanes when a vehicle hidden in the blind spot and bring it to a complete halt through the adaptive cruise control system in traffic.

How comfortable is the Mercedes-Benz C Class 4/5 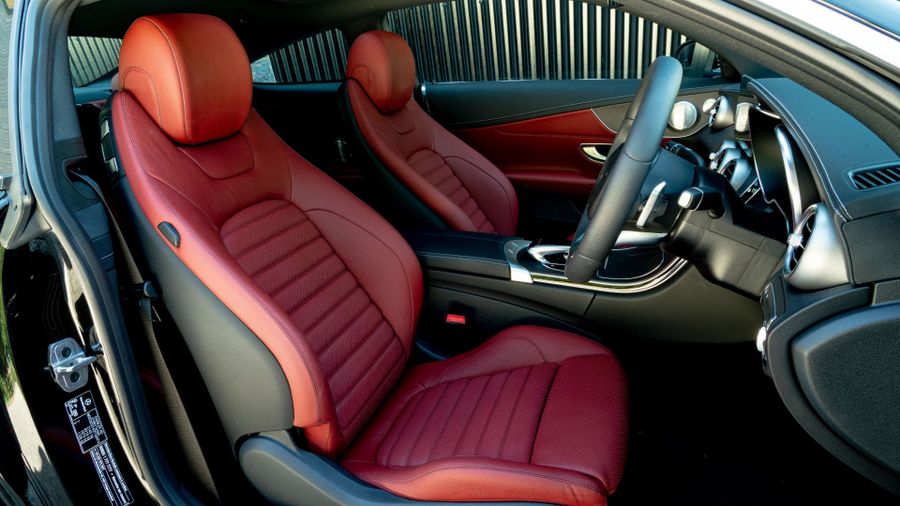 The good news is that the C-Class Coupe’s interior has just as much wow-factor as its glamorous exterior. All versions have dense-feeling materials, spiced up by plenty of metallic and piano black or wood inserts, and the simple, clutter-free design looks cool and makes things appear even more sophisticated. The standard sports seats are comfortable, supportive and will accommodate all shapes and sizes of driver, and are upholstered in a hard-wearing artificial leather.

The minimalist layout does mean that most functions have to be controlled via the infotainment system, and we have some gripes with the standard-issue screen. It's mounted high up the dash, which makes it easy to read, but doesn't look especially discreet. Secondly, you get a touch pad controller, which can be used both like a laptop track pad to pinch and zoom maps, or to write out letters and numbers for the sat-nav or your phone book. It sounds good in theory but its positioning is awkward and in reality it’s much more of a faff to use on the move. You also get thumb pads on the steering wheel to do a similar job, which are just as much of a faff to use. Fortunately, there's also a rotary controller that you can use instead, and this is much easier to get to grips with.

Visibility doesn't suffer too much as a result of the small rear window, but we're glad that Mercedes has included a reversing camera as standard - it's a life-saver when parking up.

Accessing the rear seats is easy enough, and while headroom is naturally a little tighter than in the saloon, adults can still sit comfortably, and knee room is better than in many rivals. The rear seats also split/fold if you want to carry flat objects, and there is a ski hatch for more awkward, longer items.

The boot is a useful shape, but it's smaller than you get in an Audi A5 or a BMW 4 Series. It'll be fine for most people's needs, but fitting two sets of golf clubs or a buggy might be a bit of a push, so check it its roomy enough for you before you buy.

Elsewhere, the interior is dotted with deep pockets for storing loose items when you're on the move. The door bins are sculpted to take a couple of cans or bottles, the glove box is generous, and your wallet, keys and other paraphernalia will all find a home up front without it feeling cluttered.

Most buyers would (quite rightly) expect any coupe worth its salt to handle with more finesse than its four-door sibling, and to that end, the C-Class Coupe comes with suspension that’s been lowered compared with that of the saloon. However, we’ve only driven the car on optional air suspension so far, and it’s absolutely fab. It gives you the body control needed to take advantage of the car’s grippy rear-wheel drive chassis to provide fun in the corners, while the ride is arguably more comfortable than in any of its premium rivals.

Our experience of the standard suspension on the pre-facelift car was that it was rather firm and unsettled, and if that’s still the case (we’ll let you know once we’ve tried it), then we’d say the air suspension is definitely a worthwhile investment.

We’ve also had a shot in the high-performance C63 version, which doesn’t have full-on air suspension, but does have an adaptive setup that can also vary its behaviour according to which mode is selected. The range of different modes is rather dizzying, with six main ones, another four for the torque vectoring system that distributes drive across the rear wheels, plus no less than nine modes for the clever traction control system that allows varying degrees of slip on the back end.

Using the various profiles isn’t as complicated as it sounds, though, and the technology means that the C63 can play a variety of roles with impressive polish. It can be a civilised and comfortable cruiser, an agile and alert sports car or, if you turn everything up to eleven, an absolute foamy-mouthed, tail-sliding lunatic. 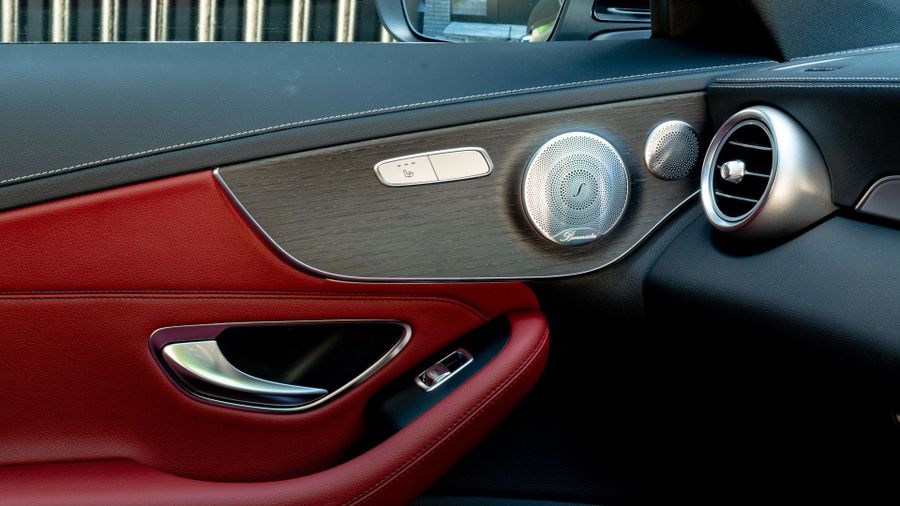 Unless you go for one of the high-performance Mercedes-AMG variants, there’s just one trim level available with the C-Class Coupe, and it’s called AMG Line. As well as sporty styling goodies such as 18-inch alloy wheels and a pumped-up bodykit, the AMG Line comes with luxury kit including rain-sensing wipers, heated part-leather seats, electric windows, two-zone climate control, cruise control, a reversing camera and a DAB-enabled stereo with integrated sat-nav.

There’s not much more in the way of luxury goodies if you choose one of the hot AMG versions, but you do get lots of upgrades that add even more aggressive looks or enhance the driving experience. 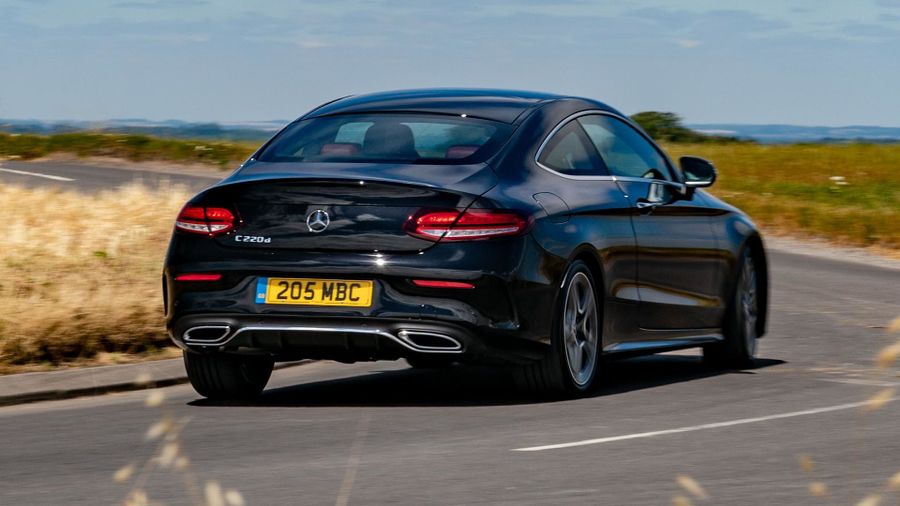 The C-Class’s talents here depend entirely on which engine you’re talking about. The C220d and C300d diesel alternatives are both really good, offering plenty of punch for easy and relaxed performance, while also displaying the quietness and smoothness you might expect from a Mercedes.

The entry-level C200 petrol engine, on the other hand, doesn’t. It’s clever on paper, as it has mild hybrid technology that uses a small 48-volt battery to support the petrol engine by adding a little extra power. Trouble is, the engine itself is particularly noisy and doesn’t offer the kind of performance that you expect given the racket it makes. On the plus side, it gives the car the ability to cruise with the engine off on downhill stretches of road to save fuel, and in this mode it's much more quiet. We haven’t yet tried the entry-level petrol, the C180, or the more powerful C300 and C43 versions.

All cars come with a nine-speed automatic gearbox as standard. On the mainstream cars, it’s occasionally a little unpredictable, and has a habit of holding onto gears longer than might be expected. The range-topping C63, meanwhile, has a stonking 4.0-litre twin-turbocharged V8 that develops 476 horsepower, or 510 horsepower if you go for the C63 S version. Unsurprisingly, it’s an absolute monster of an engine, propelling you viciously towards the horizon right from the off, and it only gets stronger the more revs you put on the dial. 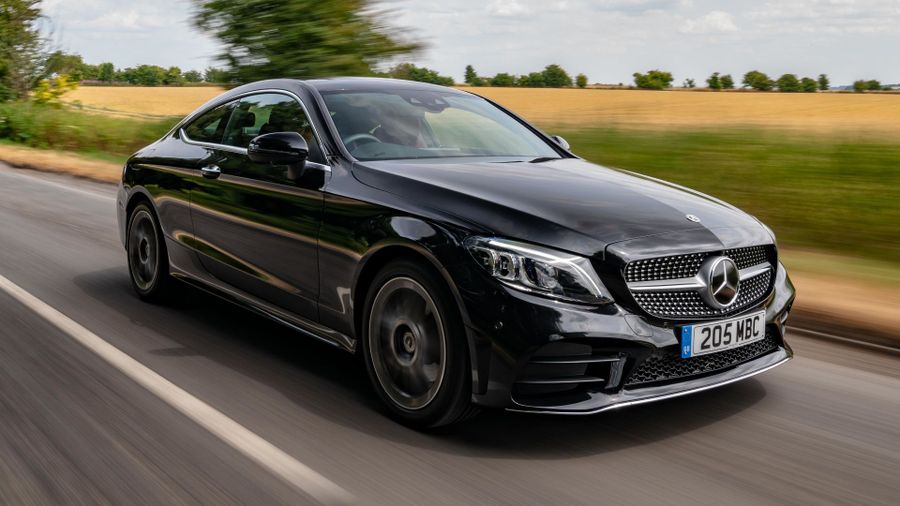