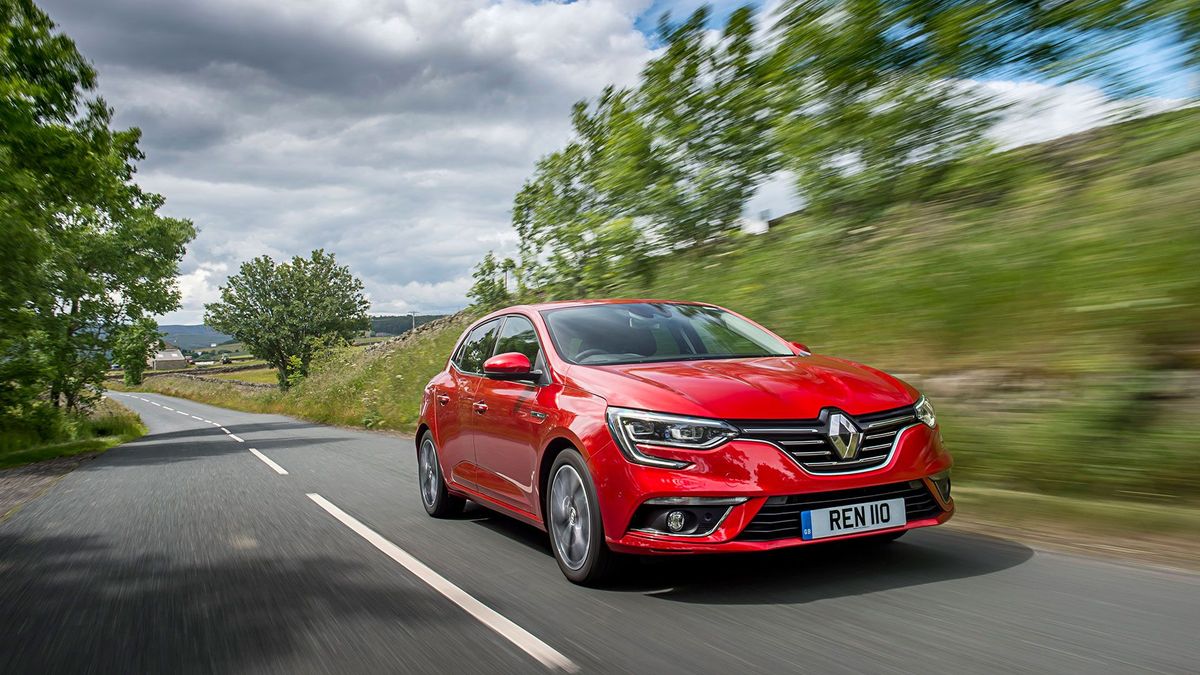 First published: 20th July 2016
Share on Facebook on Twitter
Auto Trader Verdict:
The latest Renault Megane doesn’t trouble the very best cars in the family hatchback class, because it falls a little short on quality, practicality and driving manners. That said, it’s still a reasonably compelling proposition. It looks great, it’s affordable to buy and run, and it comes packed with kit. For many buyers, that’ll be enough.
Need to know:
What is it?
The latest version of Renault’s compact family hatchback, a car that, traditionally, has been something of an also-ran in its class. It was never short of style, but it never had the comfort and class of a Volkswagen Golf, or the fun and frugality of a Ford Focus. As a result, the outgoing model never really struck that much of a chord with the demanding British car buyer, or with us.

In theory at least, the new car seems to be off to a much better start in life. It’s built on the same platform as the Renault Kadjar and Nissan Qashqai, cars that are the best of their type (albeit compact SUVs) to drive, and it uses pretty much the same range of engines. Renault has also thought hard about the type of buyer it wants to attract, and to that end, the new car is absolutely packed with technology and flamboyantly styled.

You might recognise the C-shaped headlamp design, complete with LED daytime running lights on every model, from other recent Renault models. There’s plenty more of interest besides, with all sorts of curves and creases, leading to the elongated tail lights that stretch almost right across the rear end.
What is it like?
Inside the car, proceedings are dominated by an 8.7-inch portrait touch-screen infotainment system. At least, they are on mid-range Dynamique S cars and above; lower-end models get the same 7.0-inch landscape screen found on other small Renaults. The portrait arrangement immediately gives the cabin a high-tech feel, and the extra screen size does make the R-Link 2 system easier to navigate, although it’s still not the most intuitive system of its type.

Elsewhere in the cabin, it’s a little hit-and-miss. There are some genuinely impressive materials on display in some places, but in quite a few others, you find harder, shinier plastics that damage the overall feeling of quality. The sculpted seats are wonderfully supportive and have bags of adjustment, but the small rear window and thick pillars mean your rear visibility is rather limited. While those in the front seats have bags of space, the rear chairs are tight for both headroom and legroom – anyone over six feet tall will struggle on both counts – and foot space is also in short supply. What's more, while the boot is a decent size at 434 litres, there’s an enormous lip that you’ll need to muscle heavy items over, and the back seats don’t go anywhere near flat when you fold them down, leaving a vast step and a small slope. 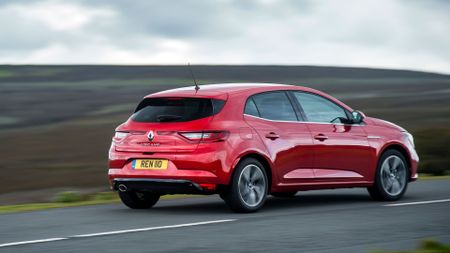 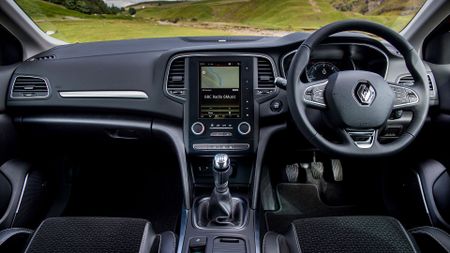 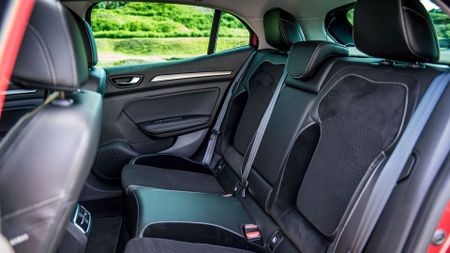 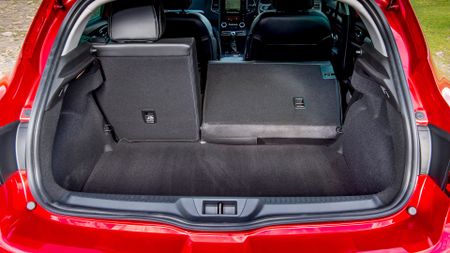 View gallery
It’s a similar mixture of positives and negatives when you hit the road. The Megane is neither the most comfortable and cosseting car of its type, nor is it the sharpest or most thrilling, but it does a half-decent job in both areas. The suspension is supple enough that you won’t be wincing over bumpy roads, but there’s enough firmness to make the car feel controlled and stable in bends.

There’s no shortage of grip, either, but unfortunately, the steering doesn’t really do the handling any favours. It feels incredibly remote, and when you leave the drive mode selector (provided on all but the entry-level version, altering the behaviour of the steering, throttle and engine sound) in Comfort, the featherlight weighting can have you wandering around in your lane. Selecting Sport mode dumps a bunch of artificial-feeling weight into it, and although this doesn’t make the steering any more engaging, at least the extra resistance makes the car feel slightly more stable.

That said, the diesel engine fitted to our test car was a highlight. It’s the same 108bhp 1.5-litre diesel used to cracking effect in many other cars from the Renault-Nissan alliance, and it’s just as successful here. Granted, it’s no ball of fire in the pace department, even when you rev it out, but its generous low-down torque makes it really flexible and easy to drive. The fact that it’s also impressively smooth and quiet really helps its easy-going nature, so it’s best to just sit back and adopt a lazy, short-shifting driving style. It’s just a shame that the notchy, long-throw gearshift isn’t a little more satisfying.
Should I get one?
We can certainly see why you might. We won’t pretend that the Megane is the best car in the family hatchback class, as it has flaws in a lot of areas. But, if the class leaders are too common or too conservative for your tastes, then we could understand you choosing the chic-looking Renault.

If you do, you’ll enjoy a generous amount of standard equipment. The entry-level Expression+ model comes with alloy wheels, cruise control, air-con, four electric windows and a DAB stereo with Bluetooth, while the upgrade to Dynamique Nav trim earns you nav (obvs!), climate control, automatic lights and wipers, keyless entry, rear parking sensors and part-leatherette upholstery. Dynamique S Nav gets you the portrait screen, front parking sensors and a reversing camera, while Signature Nav has full leather trim and LED headlamps; GT Line Nav gets a sporty body kit; and, GT Nav has four-wheel steering and a twin-clutch gearbox.

On top of that, being a Renault, the Megane will be one of the safest cars in its class. It’s already earned the maximum five-star rating from Euro NCAP, and all versions come with six airbags and tyre pressure monitoring, while all but the entry-level version also have lane departure warning and automatic high/low-beam lights. Strange, then, that autonomous emergency braking (standard-fit on many rivals) is left on the options list for all versions.

The 1.5 DCi Dynamique S tested here costs £20k, making it a useful slice cheaper than rivals like the Focus and Golf. The car also returns official figures of 76.4mpg and 96g/km, which is pretty impressive by class standards and will make the Megane affordable to run.

A word of warning, though: if our experience is anything to go by, it’ll be the lower-end versions of the Megane that make most sense. We also tried the £25,500 GT 205 version, which is the sportiest version currently available and powered by a 202bhp 1.6-litre petrol. It’s really not up to much, as it has neither the pace nor the involvement of a hot hatch, but it does have the punishing ride. Our advice? Stick with the more modest Megane models, and you’ll be far better off.
Key facts:
Also consider:
Ford Focus
Fun and comfortable to drive, practical for a family

Seat Leon
An affordable alternative that’s solid in every area

Find a Renault Megane in our classifieds 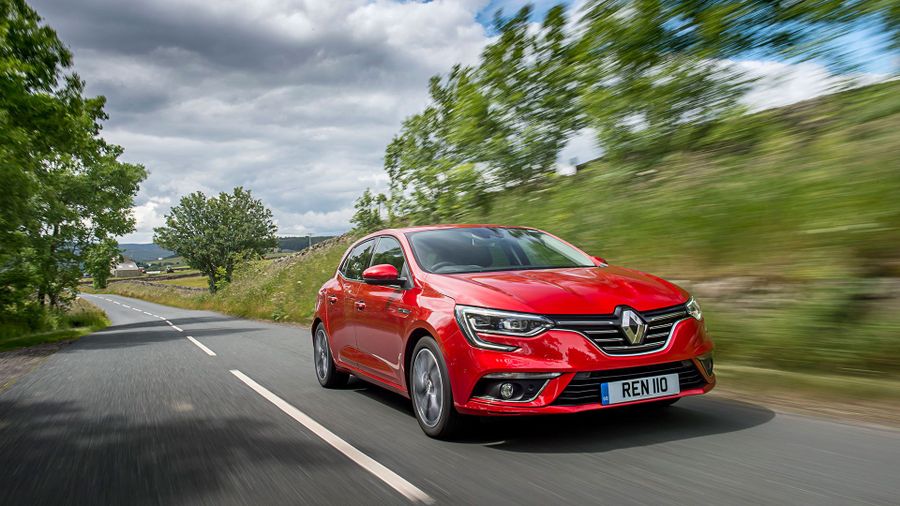