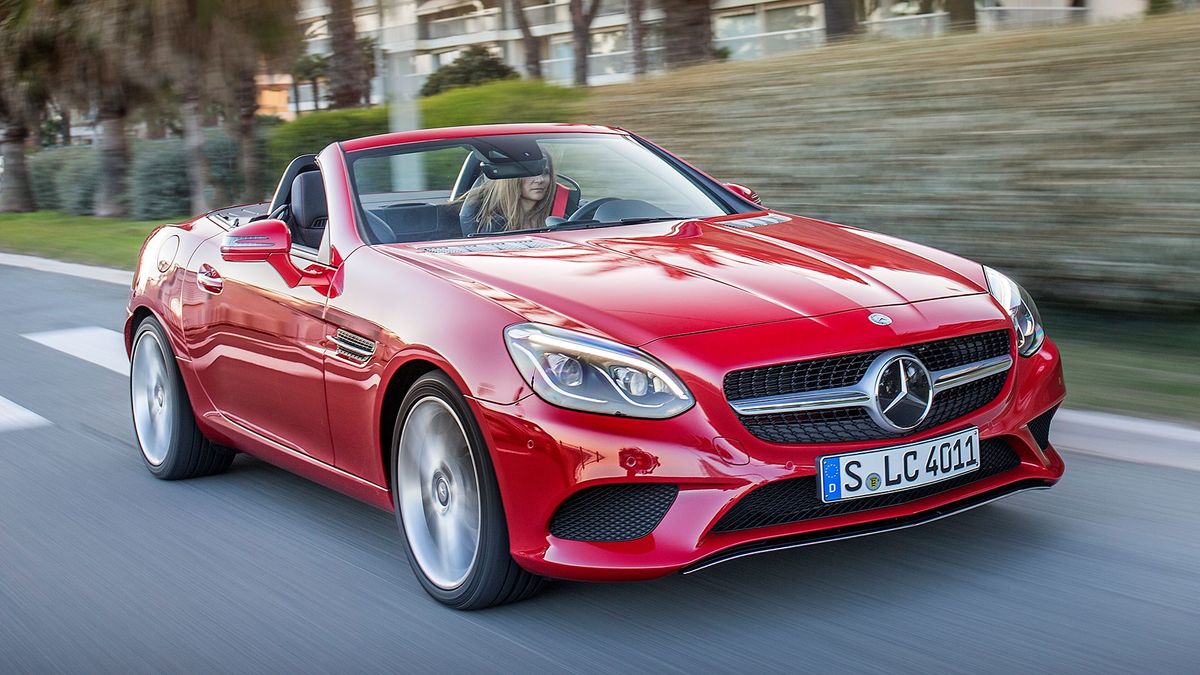 View gallery
First published: 6th April 2016
Share on Facebook on Twitter
Auto Trader verdict:
Ending two decades of the SLK name midway through the Mk3’s life, and replacing it with the near-identical SLC, might seem like an odd thing to do; but, while the updates are fairly minimal, they have improved the product measurably. The smartened-up Mercedes is more comfortable and engaging to drive than before, which gives it the edge on the ageing BMW Z4, but even so, keener open-top drivers are probably going to look at the Porsche 718 Boxster above all else.
Need to know:
What is it?
The Mercedes-Benz SLC is the artist formerly known as the SLK, facelifted and renamed (thus bringing it into line with the wider Mercedes badge restructuring that began in 2015) to keep it competitive in the premium roadster marketplace.

As with its big brother, the SL (which was also recently given a minor primping), the visual shift from SLK to SLC is extremely subtle, and near impossible to spot at the rear of the car. Instead, this is a case where ‘facelift’ is a truly accurate summation, as it’s at the front of the SLC where the biggest alterations can be spotted, with the diamond-pattern grille, air intakes and LED daytime running lights all revised.

The SLC’s interior gets the lightest air-brushing, too, including aluminium trim parts with a carbon-fibre finish and a redesigned instrument cluster, but the bigger news is the extra technology that's been introduced and the ability to raise or lower the roof on the move at speeds of up to 25mph.

In the UK, there are three engines in four power trims to choose from; and, while the 200, 300 and astoundingly quick Mercedes-AMG SLC 43 have petrol engines, our first experience of the car was in what is expected to be the best-selling SLC, the diesel-engined 250d AMG Line. 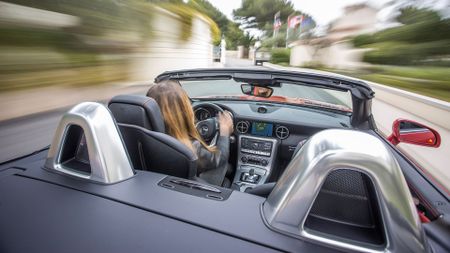 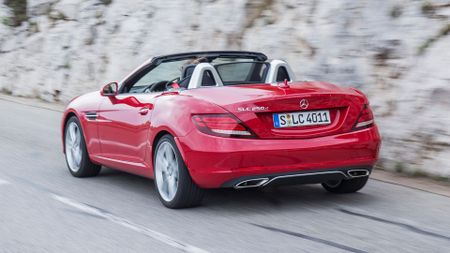 View gallery
What's it like?
Absolutely fine, if not the most scintillating driving machine in its segment. With 250d badging, the Mercedes uses the venerable 2,143cc twin-turbocharged four-cylinder diesel engine, which has already been superseded in the E-Class by the 192bhp, 1,950cc turbodiesel, but the spread of the new engine to the rest of the Mercedes range hasn’t started in earnest yet.

Having said that, in a car where you can open the roof to hear its exertions more clearly, this is one of the quietest installations of the 2.1 we’ve encountered. This is both a blessing and a curse for the SLC, because it makes it a highly refined car to cruise in, but when driven in a more spirited fashion there’s little audible reward for the driver. Some four-cylinder turbodiesels, mostly from the Volkswagen Group, can make a moderately interesting noise, yet the Mercedes does nothing but emit a discreet, rumbling note under duress. It’s not bad, but neither is it alluring.

There’s nothing wrong with its performance, however, as a massive 369lb ft accessible from 1,600- to 1,800rpm has little trouble punting 1,605kg of convertible about. It maybe doesn’t feel quite as quick as a 6.6-second 0-62mph time suggests, but the SLC 250d can be hustled along at a decent pace and there’s little turbo lag to overcome, either. One note of caution to sound here – the SLC’s official 70.6mpg economy figure seems wildly optimistic, given we saw around 35mpg during a moderately quick drive. 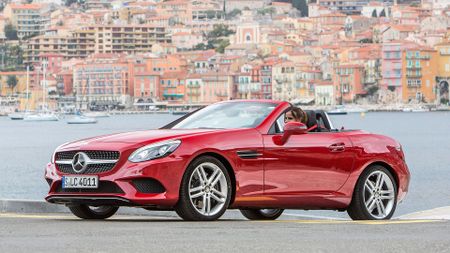 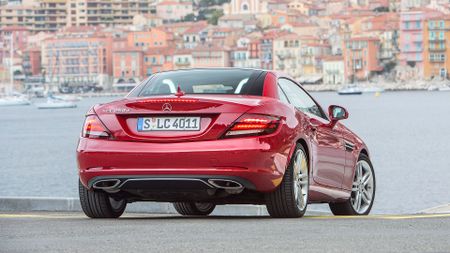 View gallery
The rest of the SLC’s dynamic package is also good, though it should be pointed out that our test car had optional adaptive dampers fitted. The steering is remarkably pointy and gives reasonable feedback, especially in Sport+ mode, while the nine-speed gearbox responds quickly to the driver’s paddle shift commands. The brakes are perfectly acceptable, too, and the body control is of a high standard.

Having said that, previous versions of the SLK have never been the sharpest tools in the box, and for simply driving along sedately, enjoying the open-air experience, the SLC is excellent. On a trailing throttle, the engine and exhaust are sufficiently muted, while the ride is noticeably softer on the diesel SLC than on the petrol models.

Acoustic insulation is good with the top up, but even more impressive with the roof down, as conversations can be held at motorway speeds without the need to shout at your companion at the top of your voice. That’s because the SLC keeps its occupants well isolated from buffeting, which improves the long-distance comfort of the car.

Practically, it’s not without merit, as the boot stands at a useable 335 litres and you can specify a semi-automatic boot separator, which makes getting at luggage underneath the stowed roof easier. Lowering the two-piece glass and metal top can indeed be done at speeds of up to 25mph, but the process needs to have been started with the SLC travelling at near-walking pace.
Should I get one?
If all you want from your roadster is for it to look good and drive in an easy-going fashion, at the same time as providing a feeling of luxury motoring, then the Mercedes SLC 250d fits the bill perfectly. The slick new nine-speed automatic transmission and smooth engine make it a refined car, too, but keener drivers are still going to consider other options before choosing the SLC – which is competent at all times, but rarely exciting.
Key facts:
Also consider:
BMW Z4
Still has a strong range of engines and a reasonably engaging chassis, but it’s due for replacement soon and there’s no diesel option

Audi TT Roadster
Every bit as convincing as the Coupe. It’ll flatter the talents of even the most timid driver, has performance and refinement in spades, and as an ownership proposition, it’s close to perfect

Porsche 718 Boxster
The move to four-cylinder engines is proving controversial; the enduring magnificence of the Porsche’s chassis, however, is not in doubt 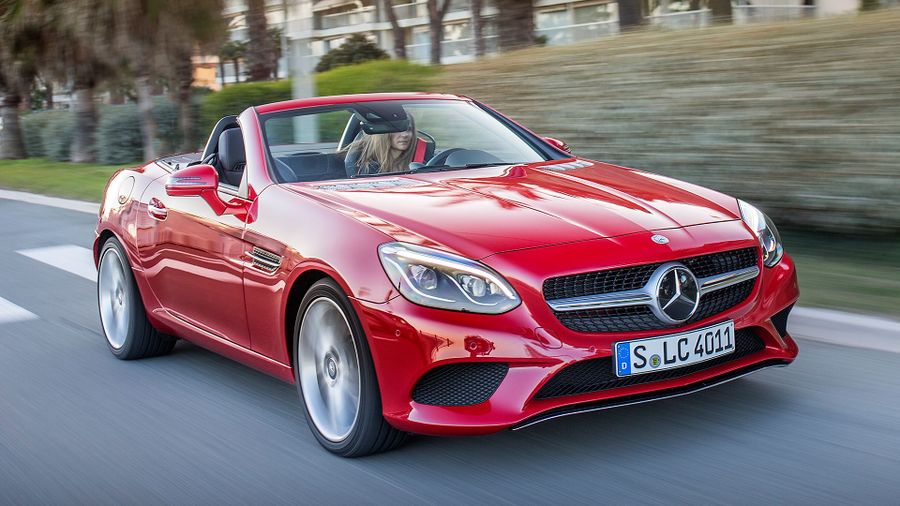