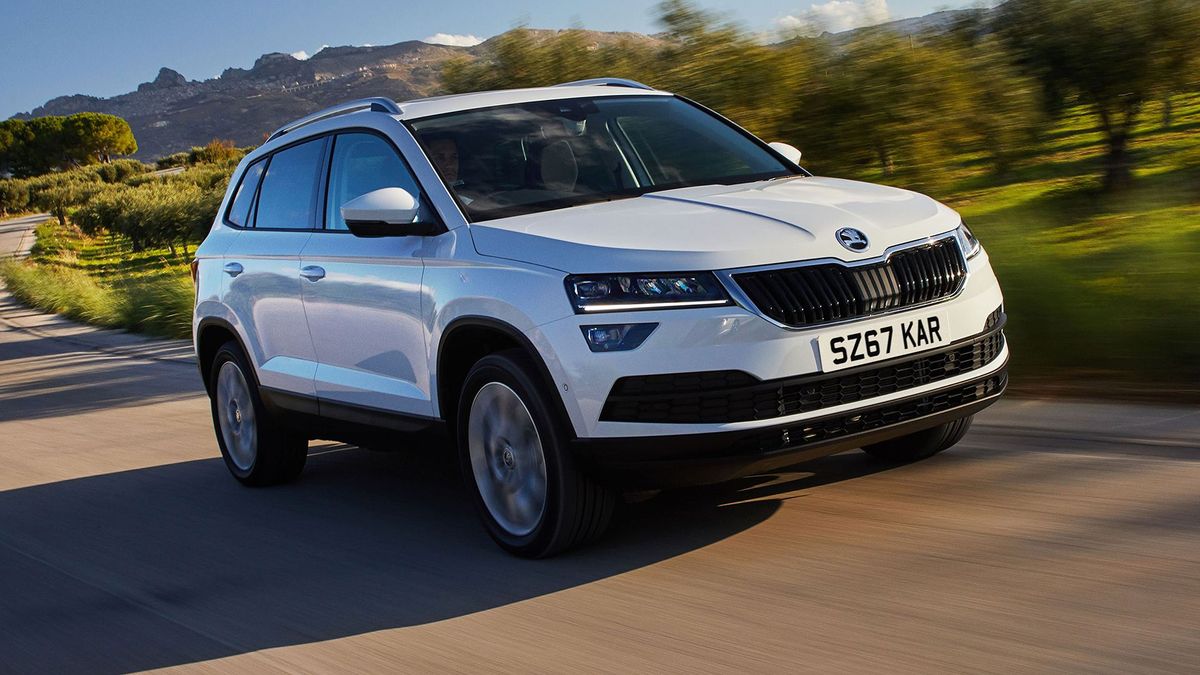 The name may be a bit of an odd one but there’s nothing strange about the Skoda Karoq. It offers everything you’d expect from a modern mid-sized SUV, including a stylish and robust cabin, plenty of space inside and lots of standard equipment.

It’s also a very easy and comfortable car to live with, thanks to its light controls, soft ride and tidy handling. It’s available with an excellent range of strong, reasonably efficient engines, and a choice of manual or automatic gearboxes. There’s also a four-wheel-drive version for those who like to go off-roading, so it pretty much has all the bases covered.

Pick of the range
1.5TSI 150 2WD SE
A strong, smooth engine and generous standard equipment
Most economical
1.6 TDI 115 2WD DSG SE
Combined economy of 64.2mpg is impressive for such a big car
Best avoided
2.0 TDI 150 4x4 SE-L
The strongest diesel engine is expensive and only available with four-wheel-drive 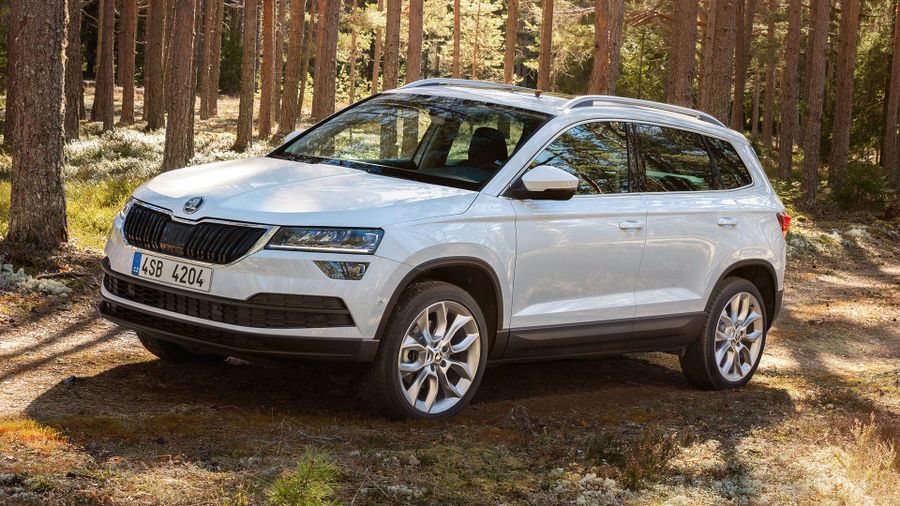 The Karoq is the replacement for the Yeti in Skoda’s line-up, but in terms of styling, the two cars couldn’t be more different. While the Yeti polarised opinion with its rather eccentric design, the Karoq is a far more conventional car, especially viewed side on, when it could be mistaken for any number of VW Group products. Every model in the range gets alloy wheels as standard, along with roof rails, front fog lights and LED running lights. Pricier versions also benefit from LED headlights, chrome roof rails and window surrounds and electric folding wing mirrors. 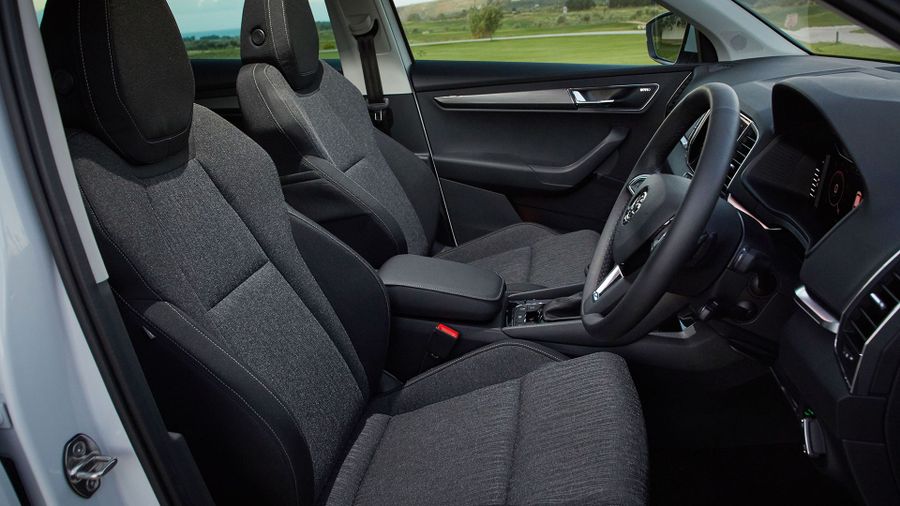 There was a time when there was clear divide between Skoda interiors and those you’d find in more upmarket Volkswagen Group product, but these days there’s far less distinction. The vast majority of materials you touch are soft, and although there are more relatively hard surfaces than you'll find in, say, an Audi, they don’t detract from the feeling of robust, high-quality construction.

There’s also a wide range of adjustment on the driver's seat and steering wheel, and that should allow almost everyone to adopt a comfortable driving position and get a good view of the road ahead, However, the pedals are slightly offset to one side, so you can find yourself sitting at a wee bit of angle.

Higher-spec models feature a large touch-screen infotainment system, including sat-nav. It all looks very classy, and the sharp responses and logical menus make it fairly intuitive to use when you’re on the move. The Karoq also benefits from the Volkswagen Group’s influence in other areas. For example, most of the switches are all but identical to those you’ll find in an Audi and, as a consequence, they all operate with a high-quality action. 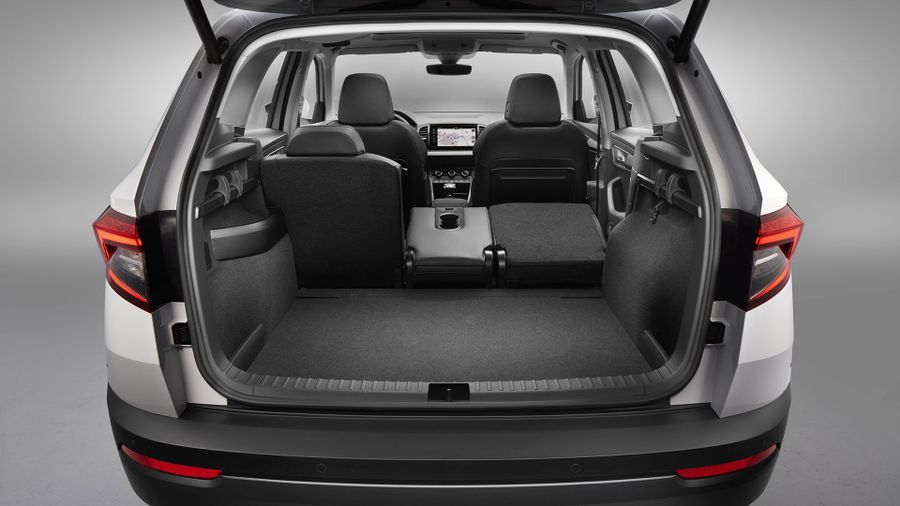 Basic Karoqs have a rear bench that's fixed in place, but with seat backs that split 60/40 and fold flat to help accommodate longer loads. However, on SE models and above, you get the more versatile 'Varioflex' system, that includes three individual rear seats, which slide back and forth, and recline to provide greater comfort.

This also creates no end of different ways to share out the passenger- and boot space, and the boffins at Skoda reckon the luggage space can be adjusted anywhere from 479 to 588 litres, depending on where you slide the seats. What's more, providing you’ve got somewhere to store them, you can take the rear seats out entirely to create a small van-rivalling 1810 litres of load space. However, with the seats in place but folded there's a very large step between boot floor and seats, which lessens the practicality somewhat.

With the rear seats set as far back as they’ll go, those travelling in the two outboard rear sets will be treated to a good amount of head- and leg-room. However, the middle seat is much narrower than the other two, so if you get stuck there, you’ll definitely feel like you’ve drawn the short straw.

There are plenty of storage areas dotted around the cabin, including a good-sized glovebox, water bottle-gobbling door pockets and a deep cubby hidden under the central armrest. The Karoq also comes with a pair of trays on the front seat backs, which are sure to be a hit with the kids, and neat little touches like a LED torch in the boot and an umbrella stored under the front passenger seat. There’s also the option of a powered tailgate, which can be opened via the key fob or by waving your foot under the rear bumper. 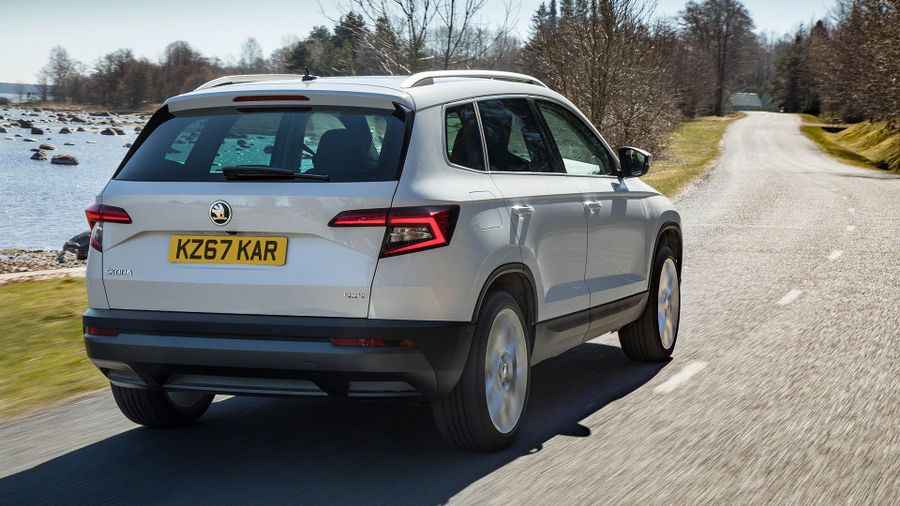 For the most part, the Karoq is an extremely comfortable car. It does a good job of isolating its occupants from external noise, and it has been engineered to allow quite a lot of smooth, vertical body movement. On a straight, evenly surfaced road this translates into a plush, easy-going ride. The problem with this is that it also permits a good deal of body roll in corners, which in extreme cases, has a chance to create motion sickness in smaller children. The car does cope reasonably well with harsher lumps and bumps, but you will notice some noise and shuddering coming from the rear of the car with every bump in the road. The more powerful 4x4 models actually cope a lot better, because they are fitted with more sophisticated rear suspension. The steering is quite light, so it’s ideal for low-speed driving around town and for carrying out hasty parking manoeuvres, but conversely, it can feel a wee bit too light at motorway speeds. That’s unless you go for the more expensive SE L models, which allow you to increase the weight of the steering to make the car feel more secure at higher speeds. 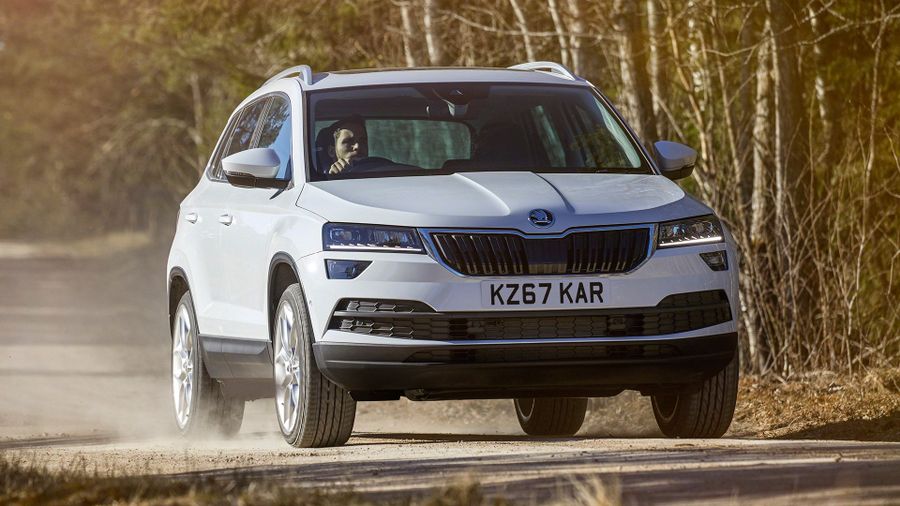 There are four different engines to choose from. A 115PS 1.0-litre three-cylinder petrol engine is supplemented by a stronger, smoother 150PS 1.5-litre four-cylinder engine, and there are also two four-cylinder diesel engines: 1.6- and 2.0-litre units, the latter only available with four-wheel-drive.

Despite hauling the additional weight of all its four-wheel drive gubbins, the 2.0-litre diesel still feels very strong in the middle of the rev range, and is perfectly capable of getting the Karoq around at a healthy lick without having to work it too hard. It’s not the smoothest engine of its kind, however, producing a fair bit of vibration over 2000rpm and it also drones quite noticeably at motorway speeds.

Next to the diesels, the 1.0-litre TSI petrol feels a little underpowered, but it rarely feels overwhelmed. It does, however make quite a bit of noise. To its credit, it's smooth and hushed when cruising on the motorway, but the moment you start to work it hard and use higher revs, you’ll be greeted by a distinctly gruff and highly audible rattle. The 1.5 has enough poke for everyday use 90% of the time, but when loaded with passengers or with stuff in the boot, it can sometimes struggle at low revs, requiring more gear shifting than would be ideal.

If you don’t mind swapping gears the old-fashioned way, then the manual gearbox is a pleasure to use, as the gearchange is nicely weighted and has a pleasingly precise action. The seven-speed automatic is fine once you’re rolling, seamlessly bolting between gears, but its initial pick up can be a wee bit jerky, which is not what you want when you're trying to squeeze the car in a tight parking space. 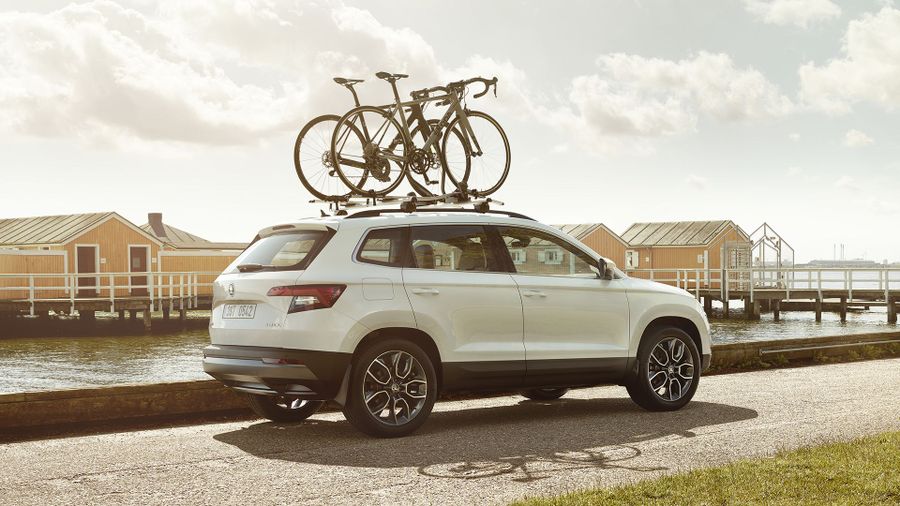 The days of bargain-basement Skodas are long gone and the Karoq is priced on par with most of its major rivals. What’s more, Skoda dealers are notoriously hard-nosed when it comes to dishing out discounts and used Skoda SUVs are highly sought after. On the other hand, as depreciation is the biggest single running cost that new car buyers face, this is certainly a feather in the Karoq’s hat.

As for how much it’ll cost you in tax and fuel, the Karoq is a relatively heavy car, and although every model is claimed to exceed 50mpg on the combined cycle, you’ll do well to achieve these figures. Three-cylinder petrol engines, in particular, are known to be far thirstier in the real world than in these laboratory tests, because you generally need to work them quite hard. Consequently, if economy is one of your prime concerns, then you’ll be better off sticking with the 1.6-litre diesel. However, bear in mind that, even though the 1.6-litre diesel’s C02 emissions are similar to the 1.0-litre petrol car, if you’re running a diesel Karoq as your company car, then you’ll have to pay an additional 3% in BIK. 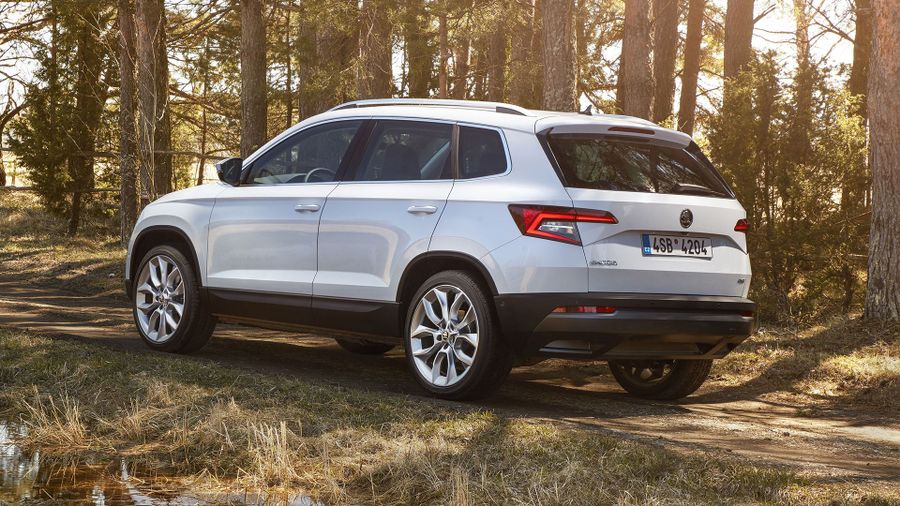 The Karoq is a brand-new model, so at this stage it’s difficult to gauge just how reliable it will be in the long term. On the positive side, Skoda as a company has consistently performed well for reliability in customer satisfaction surveys, and the Karoq shares plenty of its mechanical parts with a whole host of tried-and-tested Skoda models. One of Skoda’s most dependable models is the car the Karoq replaced, the Yeti, which should give buyers the confidence that the Karoq is built to go the distance. The engines and gearboxes have been around long enough in a variety of different models to get any issues resolved, so really, it’s only the more up-to-date electronics that remain a bit of an unknown quantity.

The Karoq comes with the usual warranty cover of three years or 60,000 miles, whichever comes first, so if anything major does fail during that time, you shouldn’t be the one footing the bill. 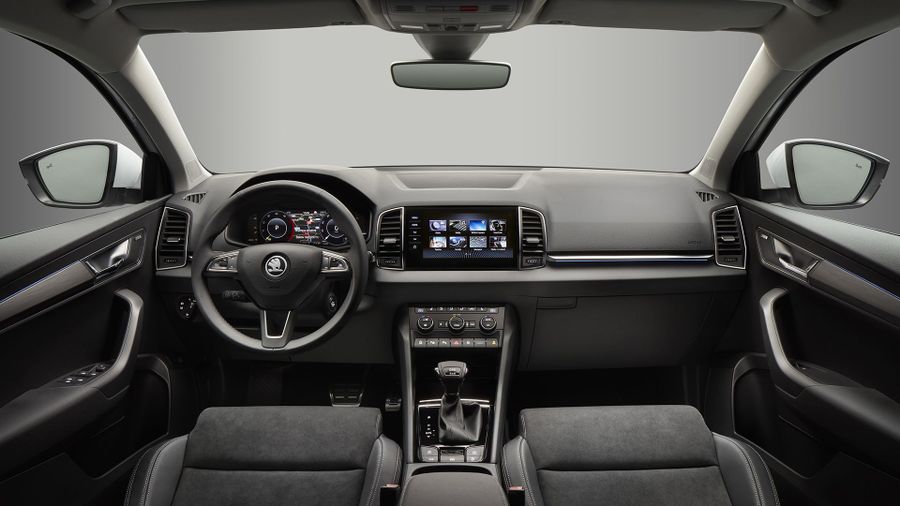 The Karoq hasn’t been test by Euro NCAP, but it is comforting to know that its larger brother, the Kodiaq, scored a maximum five stars when crash-tested by the safety organisation.

Like its sibling, the Karoq benefits from the latest VW Group safety technology, with seven airbags standard on all models, as is front assist, which is an emergency braking system that will intervene at low speed if it senses an impending collision. There’s also ‘Care Connect’, which will contact emergency services for you in the event of a crash.

The more expensive models also benefit from blind-spot-detection with rear-traffic-alert and lane-keep-assist, which will steer you back on course, if you start to drift from your lane. These models also have high-beam-assist, which automatically dips the lights if another car is coming towards you. These items are also available on more basic Karoqs as extra-cost options. 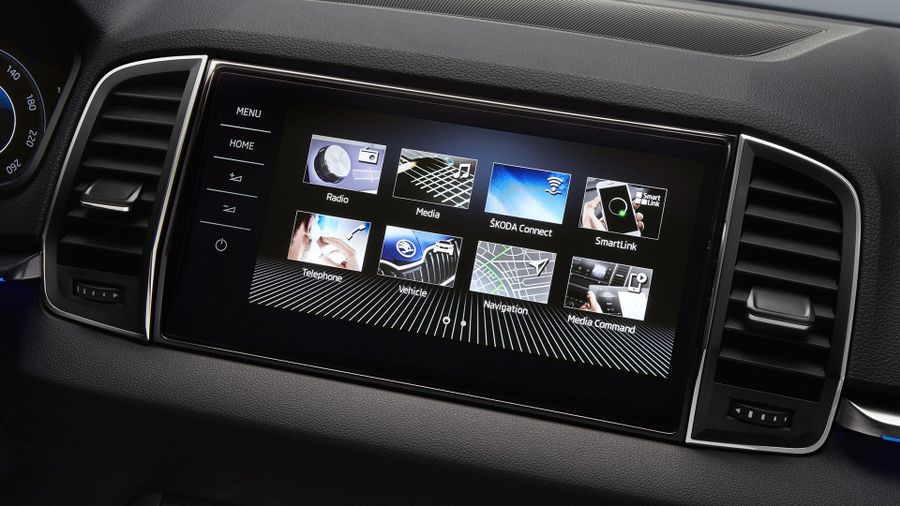 You’ll pay a pretty penny for a Karoq, but you do get a fair bit of kit for your money. The entry-level SE model comes with 17-inch alloy wheels, a leather-bound steering wheel (complete with shift paddles if you specify an automatic version), all the usual phone connectivity, dual-zone climate control, cruise control, an electronic parking brake with auto-hold function, and rear parking sensors. If you want the removable rear seats, then you’ll need to step up to SE L, which will also give you an 8.0-inch touch-screen complete with sat-nav. Heated seats with Alcantara trim and all-round parking sensors, as well as a reversing camera and full LED headlights are also included.

With so much kit fitted to SE trim, we find it difficult to recommend the dearest Edition models. If you’re determined to push the boat out, however, you’ll get a huge set of 19-inch alloys, a larger 9.2-inch touch-screen, electrically operated front seats and a powered tailgate. 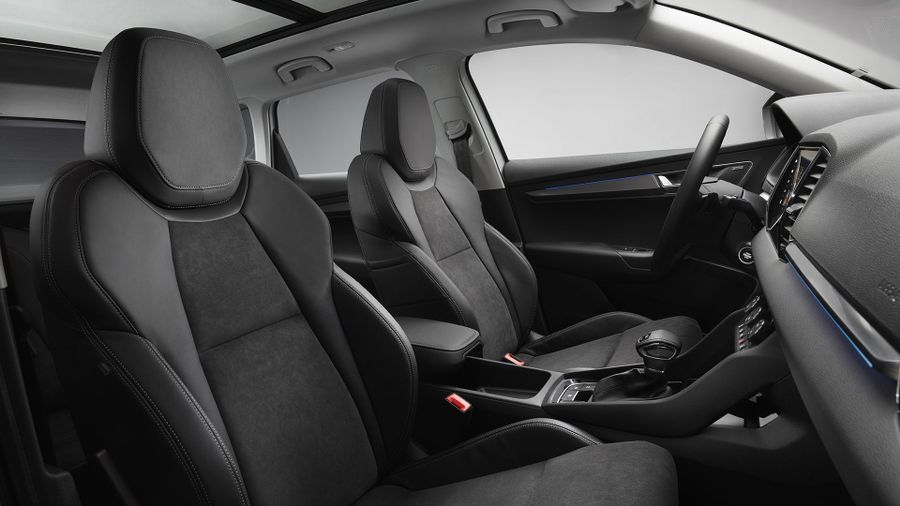 The Karoq boasts many virtues and few shortcomings. So, if you’re looking for a spacious, comfortable and easy-to-drive car that’s built to exacting standards, comes with plenty of standard kit and will hold its value as well, if not better than, almost anything else in the sector, then you could do a whole lot worse than consider Skoda’s family-friendly SUV. 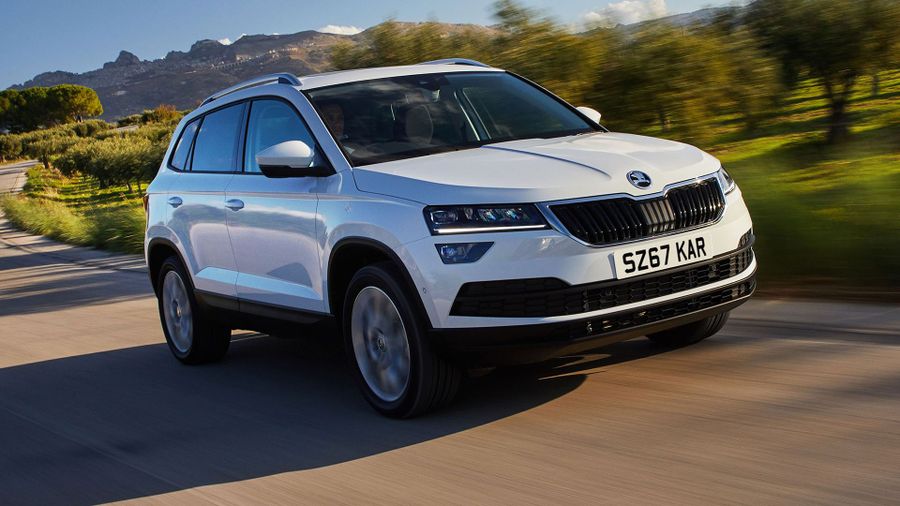