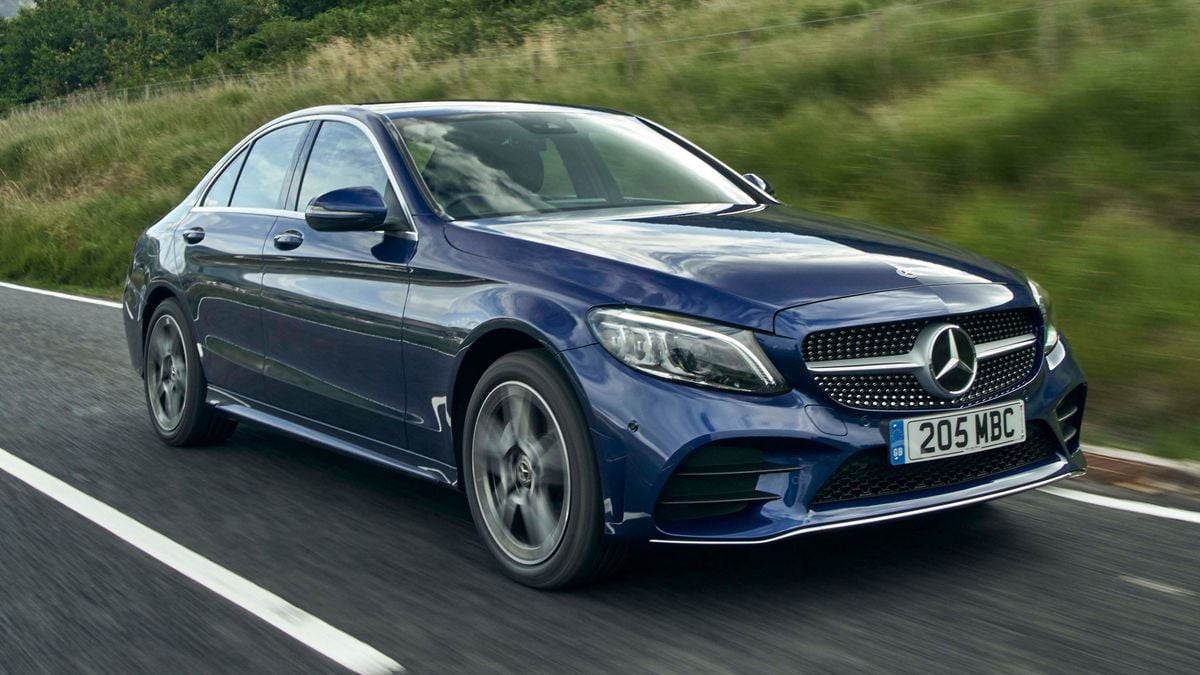 In a crowded class of compact executive saloons, the Mercedes C-Class is arguably one of the most desirable, combining smart looks with the unbeatable cachet of the three-pointed star on its nose. The question is: does it have what it takes to fend off stiff competition in the form of cars like the Audi A4 and BMW 3 Series? 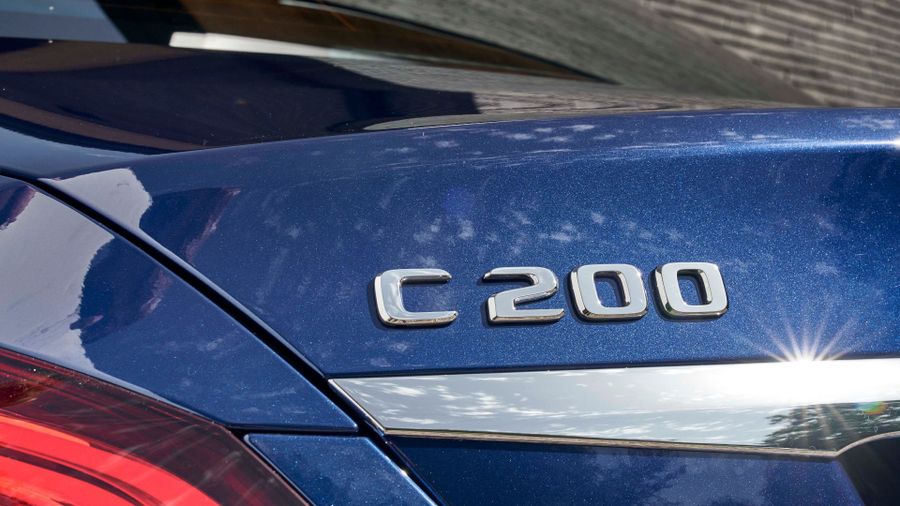 When the C-Class was facelifted in 2018, Mercedes hiked up prices considerably, making the car a good bit more expensive than its major rivals.

And, as well as being costlier to come by in the first place, the C-Class’ price increase isn’t then given back in resale values, with the Mercedes not expected to be worth any more than its peers when it’s time to move it on to a new home. Insurance groups are also a bit on the high side compared with rivals, too. CO2 emissions and fuel economy are within touching distance of the best rivals, though not ahead of them, and it’s a similar story with routine service and maintenance.

Obviously, the C63 versions are a very different financial proposition to the rest of the range, and will be prohibitively expensive for many, but those with one eye on the pennies wouldn’t be considering one anyway. 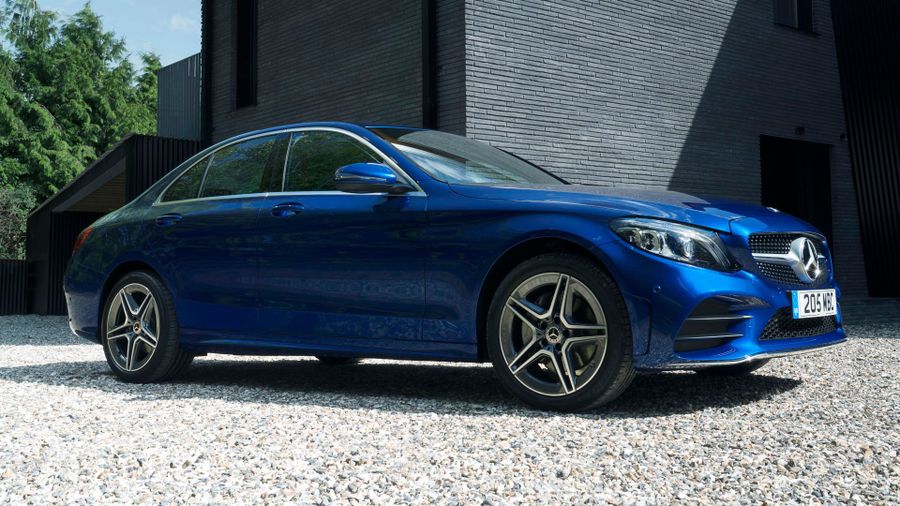 Safety for a Mercedes-Benz C Class 4/5 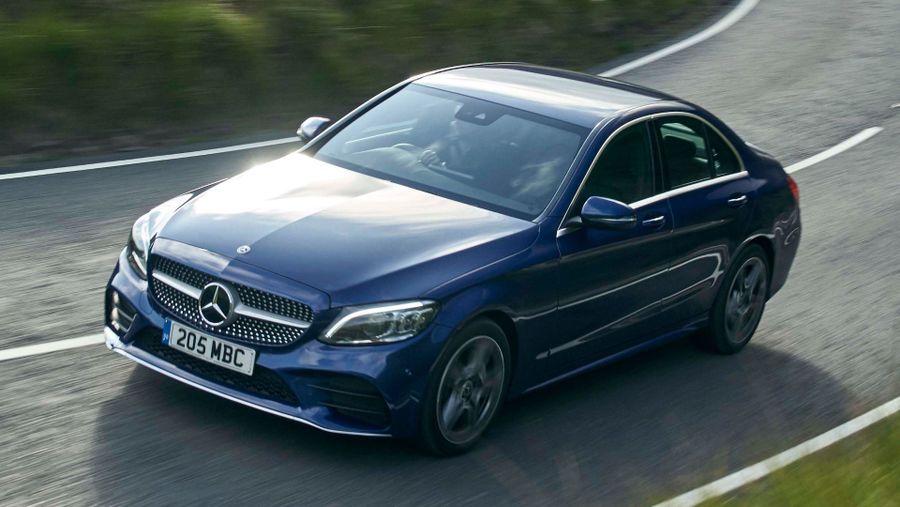 The airbag total is good, with seven fitted to various bits of the car, including a knee airbag to protect the driver’s legs against damage from the steering column in the event of an accident. You also get a collision prevention system as standard, which includes automatic emergency braking.

The really clever stuff, however, comes as part of an option package called the Driving Assistance Pack. It features technology that’s cascaded down from the S-Class luxury saloon, and includes a clever cruise control system that will slow the car for junctions, roundabouts and bends, as well as reacting to speed limit changes, and it’s joined by systems that will keep the car within its lane if the driver starts to wander around, actively prevent it changing lanes when a vehicle hidden in the blind spot and bring it to a complete halt through the adaptive cruise control system in traffic.

How comfortable is the Mercedes-Benz C Class 3/5 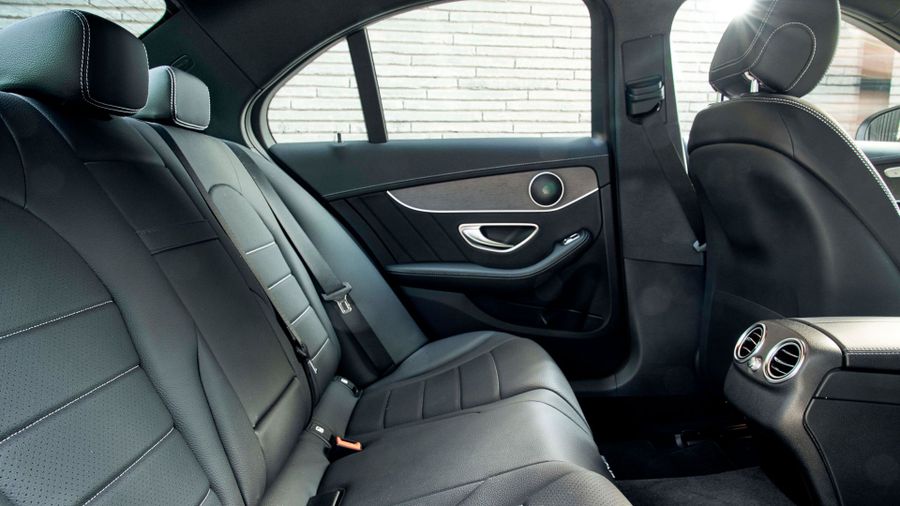 Interior quality looks and feels good, and the front of the cabin is dominated by the central screen, which measures 7 inches on the S, but 10.25 inches on all other versions. It looks like a tablet attached to the dashboard, unlike the more integrated screens of rival models.

It can be controlled either through the central rotary controller between the front seats or, in what is an innovative approach, via a small touchpad on the steering wheel.

There are two pads on the wheel – one to control the dashboard and one for the central screen. It takes a little getting used to, especially as there are a lot of buttons on the wheel already, making it tricky to pick out the one you want at a glance; happily, there’s still a rotary dial in the centre of the car which is usually easier and less fiddly to use.

The C63 has a bespoke steering wheel with yet more controls for scrolling through various driving modes and engaging various driving systems. However, these controls are really well designed and are a doddle to use considering the wide variety of functions they operate.

Interior space is pretty good compared with rivals, especially in the rear where it’s possible to house a couple of large adults comfortably. A narrow central seat means seating three in the back will be cosy, but that is the case for all cars in this sector. The boot, meanwhile, is a good few litres shy of its best rivals, but still big enough for most saloon car buyers. Cabin stowage space for phones, wallets and other bits and bobs is pretty good, too, with a covered large central bin and door pockets capable of taking larger water bottles.

The suspension you get on your C-Class depends on which version you pick. The S and SE have the standard setup, while the Sport Edition is lowered and the AMG Line versions are both lowered and stiffened. While the AMG Line setup is firmer, it’s actually more comfortable than the softer Sport suspension, which can get bouncy and jostle you over rougher roads.

Whichever you choose, the C-Class is more comfort-orientated than sporty, prioritising the ability to cover long distances in a relaxed manner, but it’s still sure-footed and composed enough to be entertaining on a quiet back-road run. The top two trims can also be upgraded to air suspension as an optional extra, which tailors the suspension set-up according to which of the five driver modes – from Comfort to Sport+ – you select. It works really well, filtering out even the worst bumps and potholes, while providing a marked improvement in agility.

We’ve also had a shot in the high-performance C63 version, which doesn’t have full-on air suspension, but does have an adaptive system that can also vary its behaviour according to which mode is selected. The range of different modes is rather dizzying, with six main ones, another four for the torque-vectoring system that distributes drive across the rear wheels, plus no fewer than nine modes for the clever traction control system that allows varying degrees of slip on the back end. Using the various profiles isn’t as complicated as it sounds, though, and the technology means that the C63 can play a variety of roles with impressive polish. It can be a civilised and comfortable cruiser, an agile and alert sports car or, if you turn everything up to eleven, an absolute foamy-mouthed, tail-sliding lunatic. 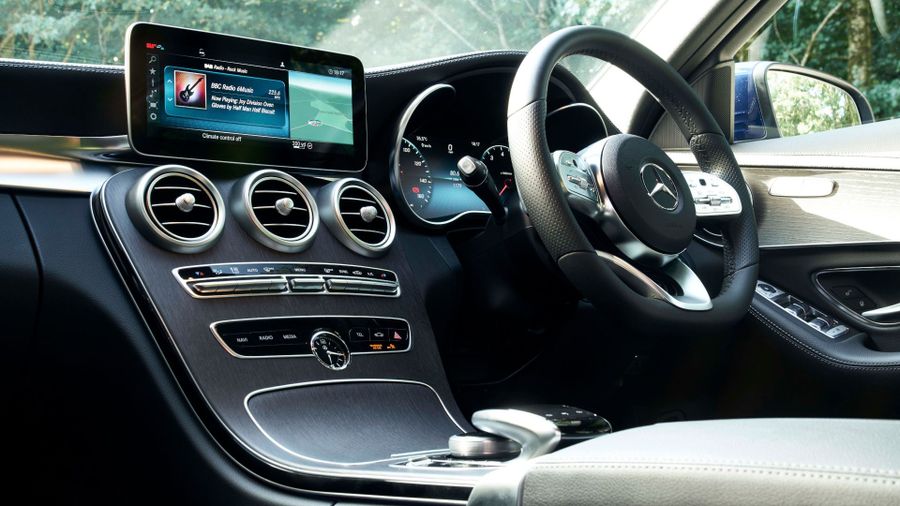 Given all premium brands like to entice buyers into the options list, the C-Class isn’t too badly specced. The range kicks off with the S, which feels a little meagre with its 16-inch alloy wheels and smaller central display, but the SE is better, with 17-inch alloy wheels, a reversing camera, satellite-navigation and heated seats.

The step up to Sport Edition from entry SE trim is a mainly cosmetic one, with leather sports seats and adaptive LED headlights the main draws. The AMG Line Edition, with its sportier styling, larger alloys and other little touches such as brushed stainless steel sports pedals, makes for an enticing further upgrade, and its 12.3-inch digital instrument cluster, which replaces the analogue gauges with a TFT screen, is worth having.

From there, you can upgrade to the AMG Line Night Edition Premium – a bit of a mouthful, we know – which gets you ambient lighting, an upgraded sound system and wireless charging for your mobile phone. And if you really want to push the boat out, there’s the AMG Line Night Edition Premium Plus, which gives you keyless entry and starting, a panoramic glass roof, and a high-end audio system finessed by hi-fi specialist Burmester.

The high-performance AMGs model can be had in standard form or corresponding Premium Plus versions, while the C43 also comes in a mid-range Premium version. All of them get even more skirts, a bespoke grille and a chunkier rear air diffuser, not to mention a host of performance enhancements. 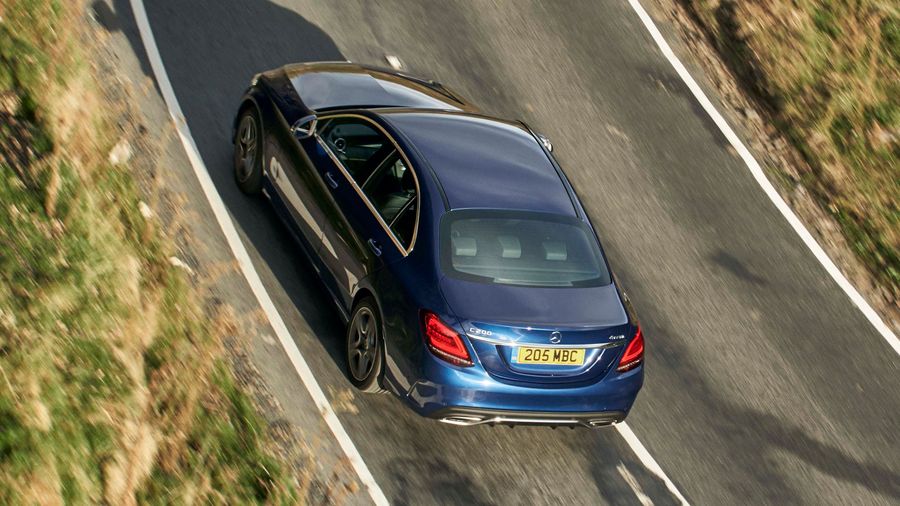 The C-Class’s talents here depend entirely on which engine you’re talking about. We haven’t tried the C200d, but the C220d and C300d diesel alternatives are both really good, offering the punch, quietness and smoothness you might expect from a Mercedes.

The C200 petrol engine, on the other hand, isn’t. It’s clever on paper, as it has mild hybrid technology that uses a small 48-volt battery to support the petrol engine by adding a little extra power. On the plus side, it gives the car the ability to cruise with the engine off on downhill stretches of road to save fuel, but the engine itself is particularly noisy and doesn’t offer the kind of performance that you expect given the racket it makes. We haven’t yet driven the entry-level petrol, the C180, or the more powerful C300 and C43 versions, and neither have we had a go in the promising-sounding C300de, which is a diesel-powered plug-in hybrid.

All cars (apart from the entry-level C180, which gets a six-speed manual) come with a nine-speed automatic gearbox as standard. It’s occasionally a little unpredictable, and has a habit of holding onto gears longer than might be expected. The range-topping C63, meanwhile, has a stonking 4.0-litre twin-turbocharged V8 that develops 476 horsepower, or 510 horsepower if you go for the C63 S version. Unsurprisingly, it’s an absolute monster of an engine, propelling you viciously towards the horizon right from the off, and it only gets stronger the more revs you put on the dial. 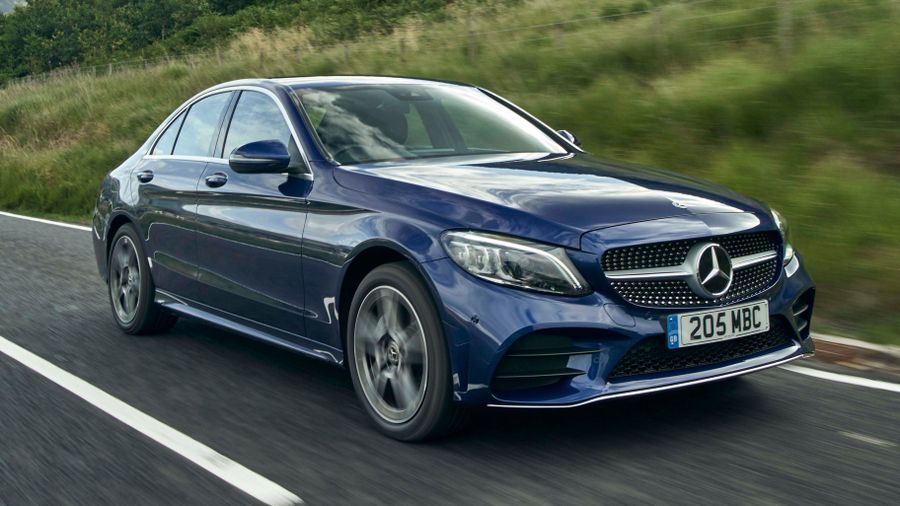