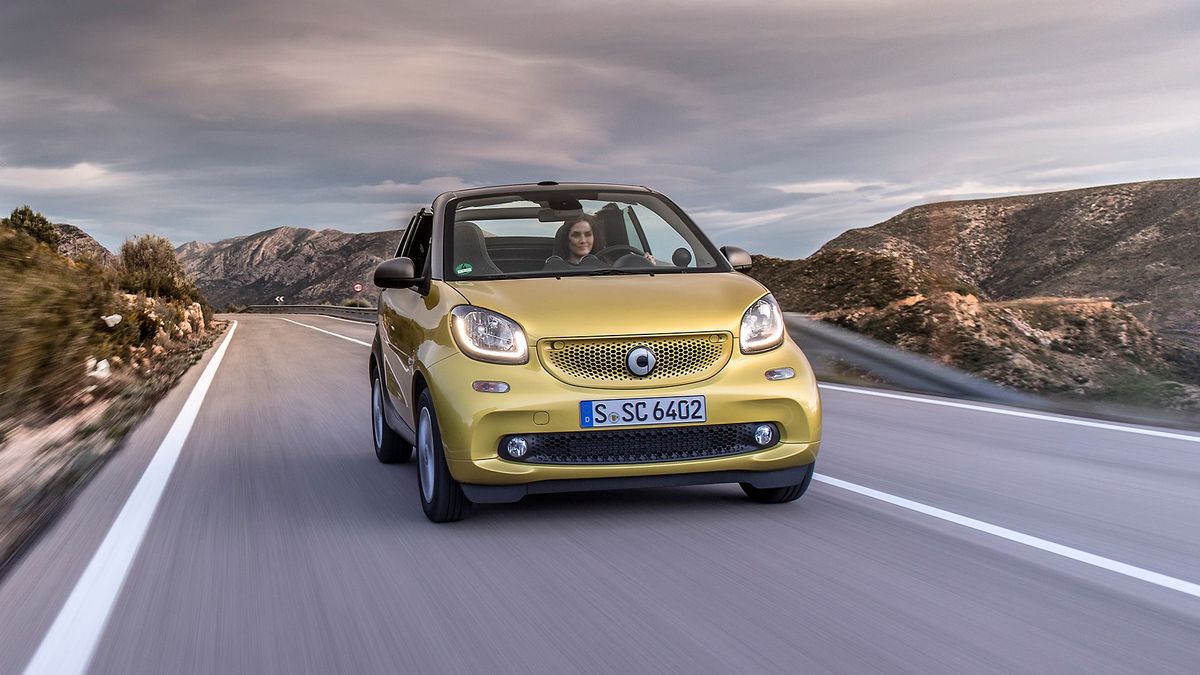 View gallery
View gallery
First published: 26th January 2016
Share on Facebook on Twitter
Auto Trader Verdict:
The Fortwo cabrio is quite expensive for what it is, but it does give genuine wind-in-the-hair thrills, and nothing at else at this price can do that as effectively. For all its shortcomings – not least the limited practicality, restricted visibility and firm ride – the ForTwo cabrio is nevertheless an appealing little car.
Need to know: 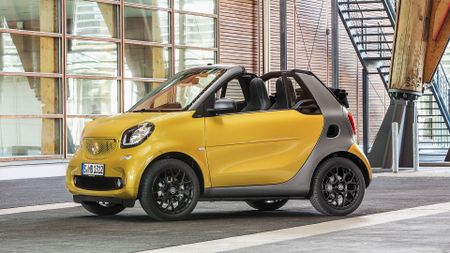 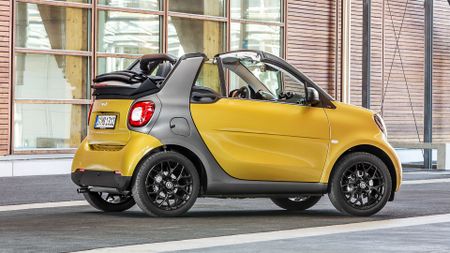 View gallery
What is it?
It will come as no great surprise to reveal that the new ForTwo cabrio is the open-top version of Smart’s city car, the ForTwo. It retains much of that car’s distinctive design – although Smart-ophiles will spot some minor differences, such as the narrower B-pillar and sportier styling of the safety cell – but the big difference is that the basic car’s hard top is replaced by a fabric roof.

It’s available in a choice of two colours – black or (as a cost option) red – and, given the vagaries of the British weather, the good news is that it can be raised or lowered in just 12 seconds, no matter how fast the car is going.

What’s more, the roof can be set up in three different ways. You start with the fabric in place, but at the touch of a button you can roll back what is effectively a full-length sunroof; then, to open up the cabin even further, you can drop the side windows and remove the roof bars, which can be stowed in a special compartment built into the boot lid.

Like the regular Fortwo, the cabrio comes with a choice of two engines, but our first experience of the new car came with what will be the most expensive combination: the turbocharged 89bhp engine mated with the optional six-speed automatic gearbox.
What's it like?
The slightly flippant answer is that the ForTwo cabrio is very like the regular ForTwo, but with a removable roof. You have a pretty much identical – and surprisingly spacious – cabin, along with the same unmistakable sense of style and huge scope for personalization within the same dimensions, for a start. However, while the addition of that fabric roof doesn’t alter the car substantially, it does make it a slightly different proposition as a city car.

What we mean by that is that, by virtue of being open to the air and being able to look up at buildings through the gap where the roof would be somehow gives you a more intimate connection with the city as you drive through it.

That said, even with the cabin in its most open configuration, you’re still conscious of the bodywork behind your head, so you never feel completely open to the elements, as you would in, say, a Mazda MX-5. Mind you, the Mazda is a very different sort of car – as well as a much more expensive one – and the criticisms we level at the Smart are ones you can apply even more so to its more direct rivals, like the Toyota Aygo (when fitted with the optional x-wave roof) and Fiat 500C.

In fact, with the roof bars removed and the side windows down, there’s no question you’re getting a genuine wind-in-the-hair experience. The only drawback is that, with the roof bars stowed in the neat compartment inside the boot lid, they eat into the already limited boot space. Then, again, if you were worried about practicality, you probably wouldn’t be considering a ForTwo of any sort in the first place. 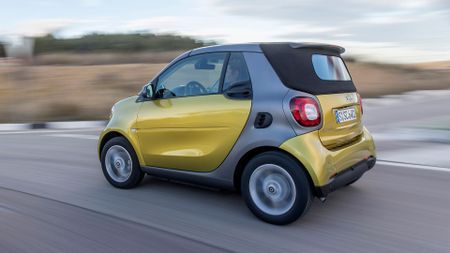 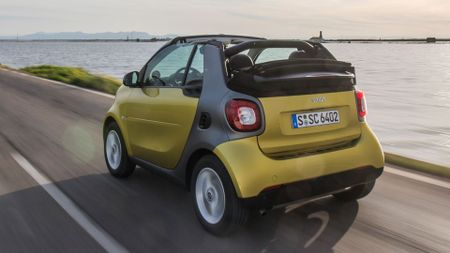 View gallery
Overall, the ForTwo cabrio is very much like the regular model in the way it drives, and the combination of the turbocharged engine and automatic gearbox really suits the car. It responds well around town, dashing eagerly from one red light to the next, but also has the wherewithal to cope with higher-speed blasts out of town on the motorway.

Mind you, if you are considering regular high-speed journeys in a Smart, bear in mind that, even with the roof in place, they’ll be very noisy experiences.

Of course, what makes the ForTwo such a fine car around the city is its tiny size. Not only can it fit into amazingly tight gaps, the turning circle is almost comically small and you have to fight the temptation to perform impromptu U-turns just for the hell of it. Is there a more easily manoeuvrable open-top car on the market? In a word, no.

That said, the car's city manners don't quite get a universal thumbs-up. First, dropping the roof makes it much more difficult to see out of the car – particularly over your shoulder and through the rear-view mirror – and secondly, the ride is pretty firm.

This shortage of comfort is exacerbated because, in a Smart, the rear wheels hit any bump so soon after the front wheels. It’s noticeable even on the most basic models, but it’s even more obvious - and unpleasant - on Proxy models, which come with larger alloy wheels and lowered sports suspension.

On the other hand, that short wheelbase does have its benefits. Out of town, for instance, the cabrio feels just as agile and nimble as the regular ForTwo, turning into corners sharply and proving a surprisingly enjoyable companion across country.
Should I buy one?
There’s no doubt that any ForTwo is at its best as a city car, and there’s equally little doubt that the retractable roof gives the ForTwo an extra dimension in that role. What’s more, while other similar cars do give some open-top thrills, none do it as well as the Smart.

True, the ForTwo is not without its shortcomings, but despite them all, it’s still an appealing car. All we would say is that potential buyers should only take the plunge when they are fully aware of those limitations.
Key facts:
Also consider:
Fiat 500C
It's not the last word in dynamic excellence, but the retro looks give it an appeal that few city cars can rival

Mini convertible
This version will be replaced by an all-new model in March, but it's still worth a look 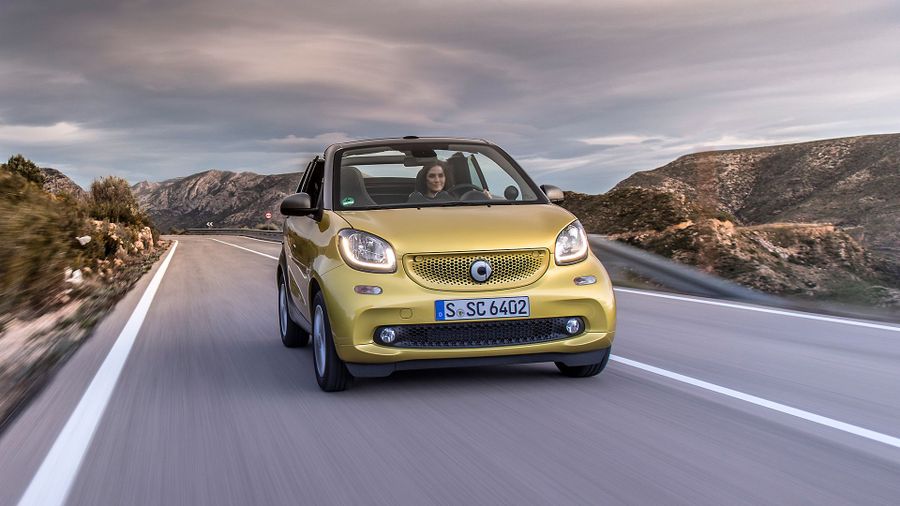