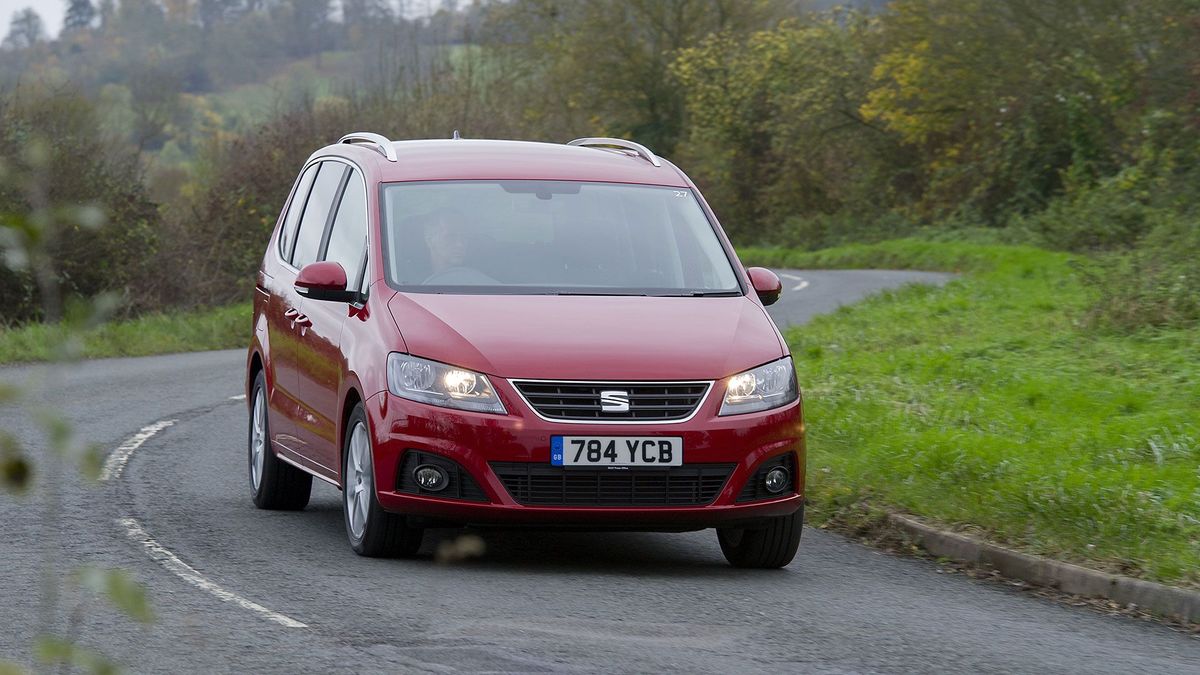 View gallery
First published: 12th November 2015
Share on Facebook on Twitter
Auto Trader Verdict:
Competition in the seven-seater segment is tougher now than when the Alhambra first arrived back in 2010 but the revised model is just as compelling. A welcome increase in cabin quality and available equipment, accompanied by a modest boost in performance and drop in CO2 emissions should keep family buyers happy. If space is a priority, this is a brilliant choice.
Need to know:
What is it?
A smarter, cleaner version of one of the best seven-seat MPVs on the market. Like its sister car the Volkswagen Sharan, the Seat Alhambra has been given a thorough refresh for 2015. The changes are subtle, but are also exactly the kind of thing family buyers really care about.

The Alhambra was already fine value, but some improved interior trims, a faster infotainment system with new Mirrorlink function for your smartphone, and some optional active safety kit – including blind spot monitors – are all designed to help it keep up with the competition.

A swift glance is all that’s required to take in the styling changes, which include LED rear lights and a new grille, but the mechanical upgrades are more significant. Both the big-selling diesel engines have been given a power boost, but are cleaner than before, and more economical. 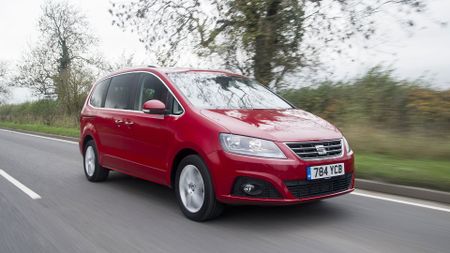 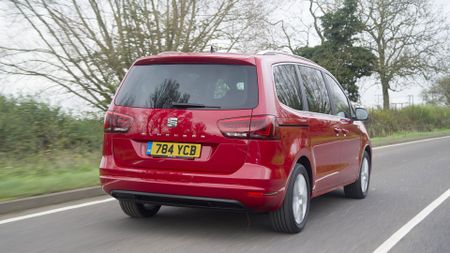 View gallery
What is it like?
Pleasingly, all that good stuff from before remains just as impressive in the new Alhambra. The interior is as spacious and versatile as ever, with sliding rear doors that give easy, hassle-free access to the middle and rear rows.

Those middle seats all slide individually, and are properly comfortable, even for adults. The process of folding them flat, or switching between different configurations is mercifully easy, and (unlike some of its rivals) the rearmost seats are suitable for grown-ups as well as kids, even on long journeys.

Large windows all-round allow light to flood into the cabin (provided its sunny outside; they’re not magic) and add to the feeling of space. Better yet, new soft-touch materials on the dash and door tops improve the feeling of interior quality, which was already decent.

Other small but welcome improvements have been made to the infotainment system, which is quicker and smoother, with better graphics than before. It’s still not as slick or simple as the iDrive system in the BMW 2 Series Gran Tourer, which gets nav as standard on every trim. 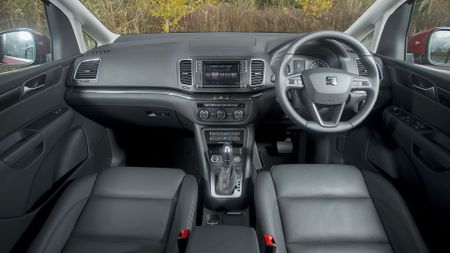 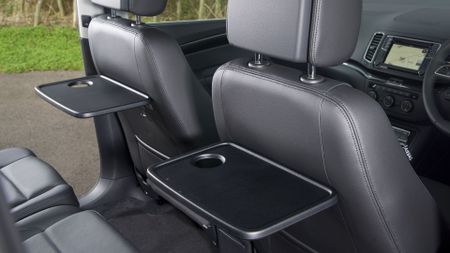 View gallery
Still, if you value carrying capacity above all else, the Alhambra is definitely the one to go for. It has over 100 litres more space than the BMW in full seven-seat mode, and nearly 500 litres more when you fold all the seats down flat; only the Ford Galaxy has a bigger load bay.

As for the driving experience, unsurprisingly the increase of 10bhp has not had a dramatic impact on the performance of the 2.0-litre diesel engine up front. Even in this 148bhp guise, it feels more than up to the task of shifting the Alhambra around, pulling strongly in-gear, and providing decent flexibility; you rarely need to stir the six-speed manual gearbox.

Some drivers find big cars like the Seat a bit intimidating to drive, but there is nothing to fear in the Alhambra. The handling is stable and secure, with fine body control and accurate, well-weighted steering that gets lighter at low speed to make parking manoeuvres manageable.

There is a noticeable diesel rumble at low speed, but no vibration through the controls, and the ride is supple enough to soak up even really bumpy surfaces without disturbing those inside. You can make it even more cossetting by adding the optional adaptive dampers, but the standard car is already pretty comfortable, and at £935, it’s a luxury, not a necessity. 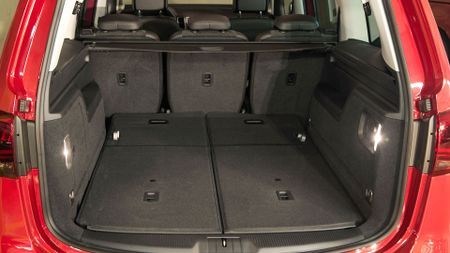 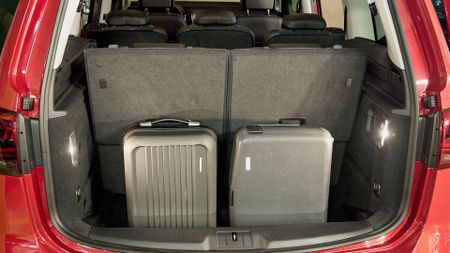 View gallery
Should I get one?
The Alhambra has been the default seven-seater people carrier for a couple of years now, but this refreshed model has to fend off a pair of new competitors from Ford and BMW. The Ford Galaxy is a little more practical, and a touch cleaner on CO2, but falls behind on cabin quality.

Meanwhile, the 2 Series Gran Tourer has a cleverly designed boot and premium badge, and its smaller footprint makes it easier to drive and park. But, if you regularly plan on carrying seven, the the Alhambra is still your best bet. It looks pricier spec-for-spec, but once you add in all the optional equipment which is standard in the Alhambra (including parking sensors, electric folding mirrors, cruise control, and some styling extras) and they’ll cost you pretty much the same.

If you do want to increase the Alhambra’s luxury credentials, then the new ‘Style Advanced’ trim adds in a lot of goodies such as heated, massaging front seats, a panoramic sunroof and automatic sliding doors and a powered tailgate for a modest price increase. But, whichever spec you choose, the big Seat remains a cracking choice, and worthy of your consideration.
Key facts:
Also consider:
Volkswagen Sharan
Identical underneath to the SEAT but not as well-equipped, and pricier

Ford S-MAX
Lovely to drive, with a smoother ride than the Alhambra, but not as practical

BMW 2 Series Gran Tourer
A premium alternative with a clever boot, but the third row is cramped 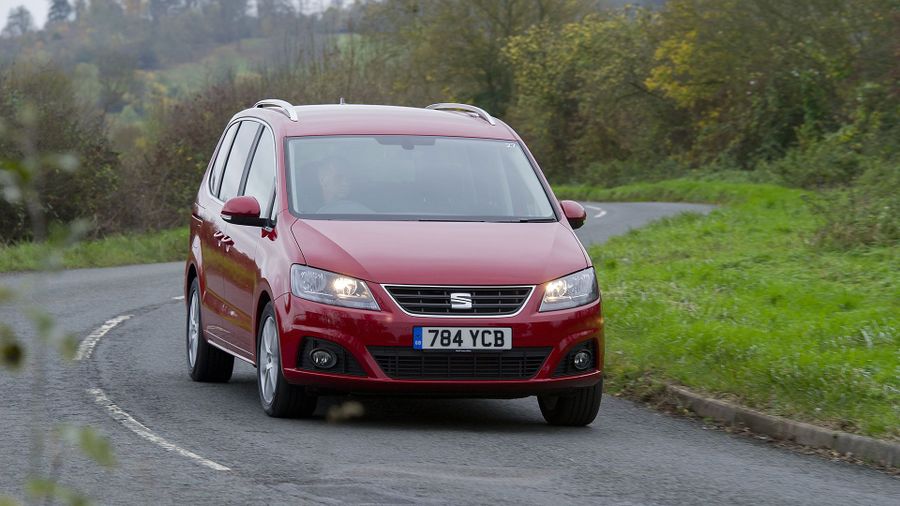