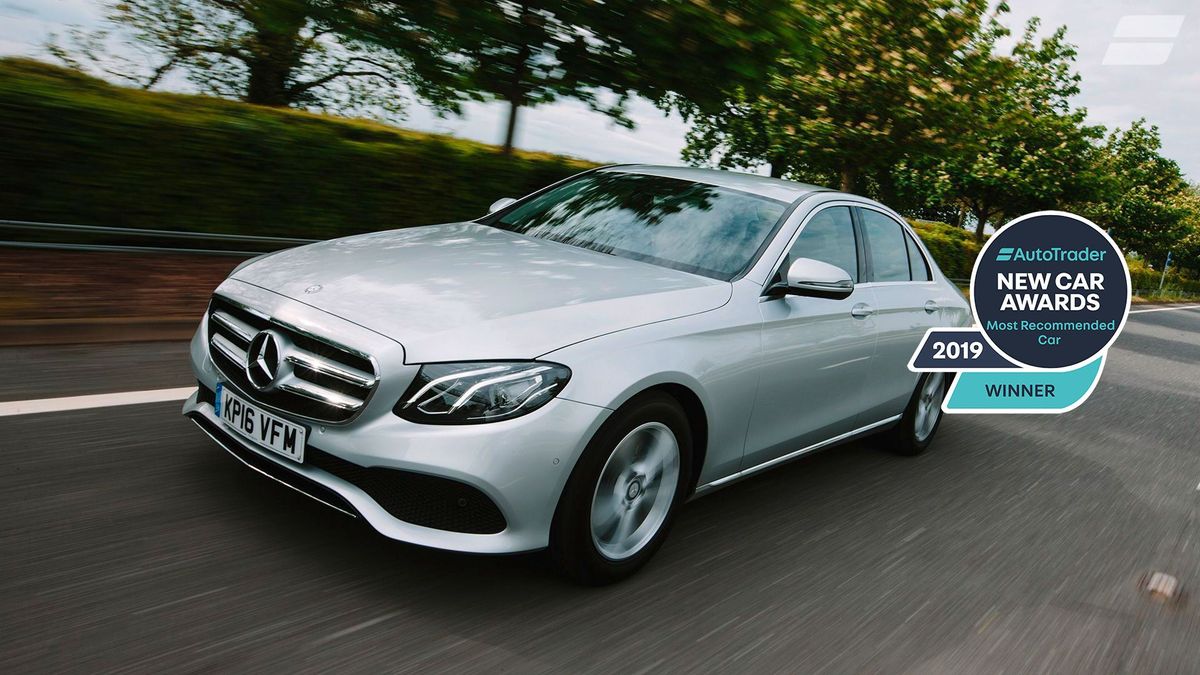 The E-Class has been a stalwart of the executive saloon class ever since its earliest days, and now this latest generation with its smooth, curvy looks exudes all the class you could hope for. Time to find out whether its substance matches its style.

Pick of the range
E220d SE
The entry-level E-Class has all the performance you need.
Most economical
E300de EQ Power
The diesel hybrid model is the one to have for company car drivers.
Blow the budget
E63 4Matic S
Properly loopy performance makes this car absolutely bonkers. 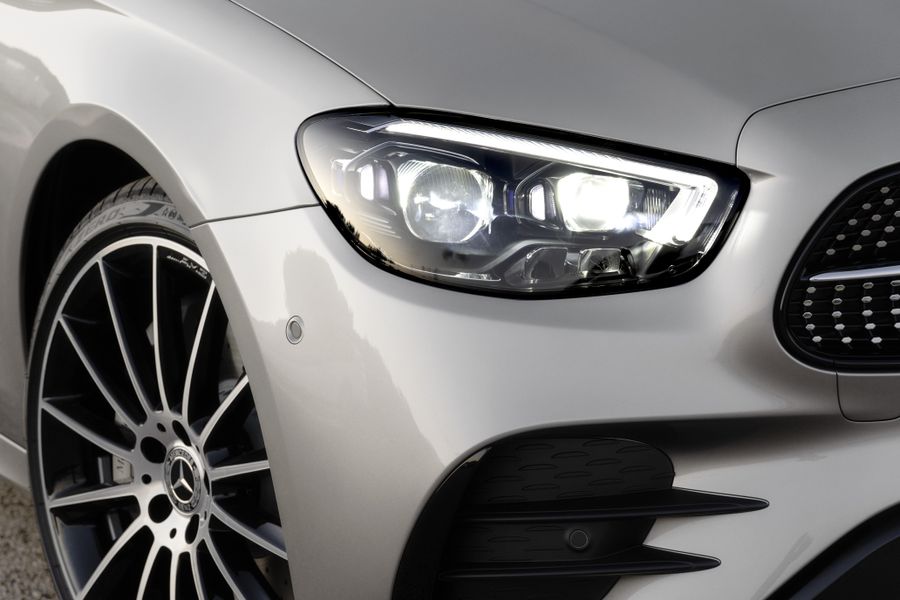 The Mercedes E-Class is pricier to buy than its rivals from Audi, BMW and Volvo, and like for like it’ll also cost you more per month on a finance deal. It does, however, justify this high asking price with a generous level of standard equipment; an automatic gearbox, which is an option on most of its competitors, also comes as standard.

Company car drivers will be attracted to the impressively low CO2 emissions figures of the petrol 300e and diesel 300de plug-in hybrids, which make both very affordable in tax, the diesel especially so.

The V6 diesels are less kind to your wallet, using more fuel, emitting more CO2, and – due to their significant increase in spec – costing more to buy. Naturally, the AMG models will be thirstier still, but you wouldn’t be buying one if you were worried about that. Servicing will also cost a little more from a main dealer than it would from this car’s traditional rivals, but the E-Class should also hold its value very well, too. 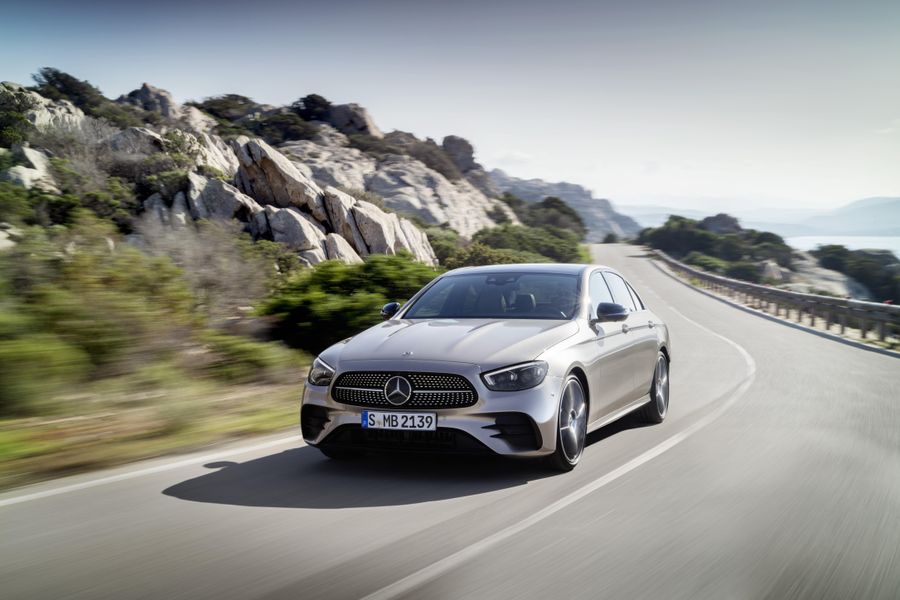 This is something of a grey area, because the latest E-Class is too new for there to be any meaningful reliability data available. Look at the scores for the previous version on Warranty Direct’s Reliability Index, and the car gives a decent account of itself. However, Mercedes’ lowly overall position in the manufacturer standings might be of concern to some people, as any repairs or replacements will be expensive.

The 2019 JD Power Vehicle Dependability Survey seems to back this up, with a below-average score for Mercedes-Benz. On the plus side, it did at least finish above BMW and Audi, and what’s more, the owner reviews on our website report very few horror stories.

The E-Class comes with a three-year, unlimited mileage warranty, which is a little better than the 60,000-mile cap most rivals come with. Service intervals are quite infrequent, depending on your annual mileage, with the car only requiring maintenance every two years or 24,000 miles, whichever comes up first. 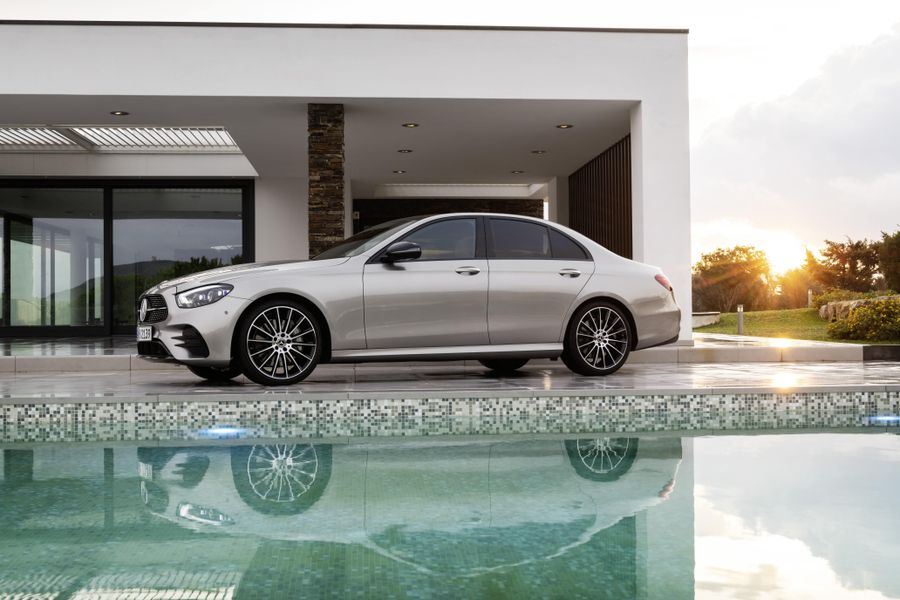 You get a vast amount of safety equipment as standard on the E-Class Estate: seven airbags, automatic emergency braking, tyre pressure monitoring, a pedestrian-friendly pop-up bonnet, brakes that dry themselves, a self-parking function, and a system that sense when you’re tired and tells you to take a break. That really is impressive.

The E-Class’ piece de resistance, though, comes in the form of an optional system called Drive Pilot, which allows it to pretty much drive itself for large portions of time. It reads road signs to determine the current speed limit, and sets the adaptive cruise control accordingly. It then follows the car in front, maintaining your speed and distance, and even helps you out with the steering.

It won’t drive the car completely reliably for you, so you still need to concentrate on the road ahead and keep your hands on the wheel, but it works well in this capacity.

How comfortable is the Mercedes-Benz E Class 4/5 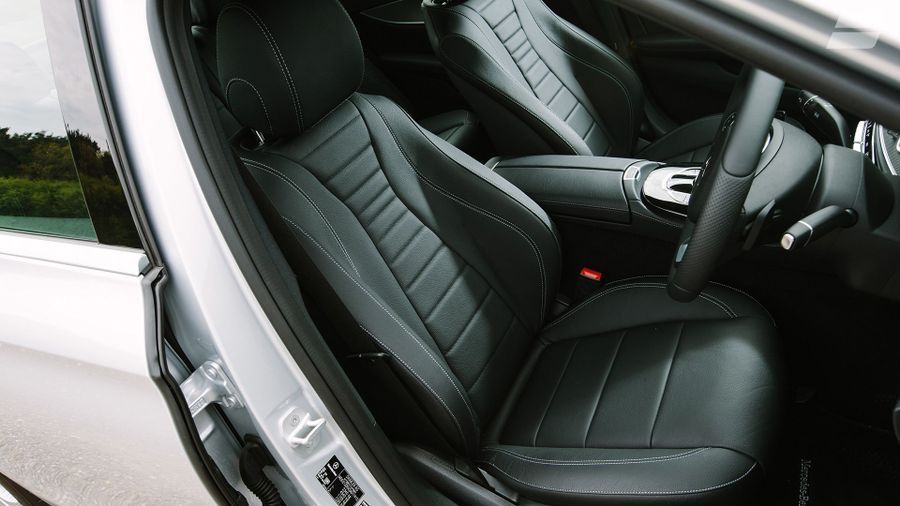 Its plush interior is one of the most obvious in ways in which this generation of E-Class is the most advanced and luxurious yet. All the materials you get look and feel expensive, and have the build quality to match. There is lots of adjustment to the wheel and seat, too, and it’s pretty easy to get comfortable.

There are some quirks to how some of the switches work, and an infotainment system that’s reasonably easy to work out, if not quite as intuitive as the systems you get in an Audi or BMW. That’s provided you use the rotary controller on the centre console, of course.

You can also control the system via a couple of touchpads on the steering wheel that respond to the horizontal and vertical swiping movements of your thumbs. It’s pretty unique, but it’s not an entirely precise way of doing things, and can be distracting on the move. Still, it feels incredibly high-tech. The same can be said of the twin displays that come as standard on every model – both the central display screen and the virtual gauge cluster ahead of the driver measure 12.3 inches, and are crisp and easy to read.

The E’s practicality is less-than ideal. You have to load items over a fair-sized lip, you don’t get a flat floor, and the aperture between the luggage compartment and the passenger compartment is an awkward shape. Go for one of the hybrid models, and your boot also become much smaller, and there's also a large step in the floor. On the plus side, however, the boot is impressively capacious, and it’s a nice, square shape. What’s more, inside the E-Class, you get lots of space for tall passengers. And while you’ll have to pay extra if you want split-folding rear seats, that is par for the course with this sort of car.

Most of the cars we’ve tried so far have been fitted with air suspension. This is standard only on the more expensive AMG and All-Terrain models, but if you want your E-Class to be as polished as it can be on the road, you’ll have to opt for one of them. It delivers a ride that’s wonderfully smooth and cosseting, yet it keeps things tightly controlled in the bends, making the car feel stable, assured and responsive.

The All-Terrain’s air suspension has a jacked-up ride height to make it even more cushy and comfortable, while the AMGs are lowered to make them pointer and edgier. On all counts, the tinkerings are very effective. The All-Terrain's extra space under the car means it'll cope with some light off-roading, but think more dirt tracks and fields than full-on rock-scrambling. Calling it "All-Terrain" is probably over-selling it a bit. "Some-Terrain", perhaps.

On more humble models with the standard steel suspension, things aren’t quite so cultured. The body moves around more in bends and you feel more of the surface beneath you. That said, it’s still a very capable car, delivering a good mix of comfort and agility, and you certainly won’t feel short-changed if you go for this car rather than its equivalent from Audi or BMW. Some versions, including the AMGs, are also available with four-wheel drive for enhanced on-road traction. 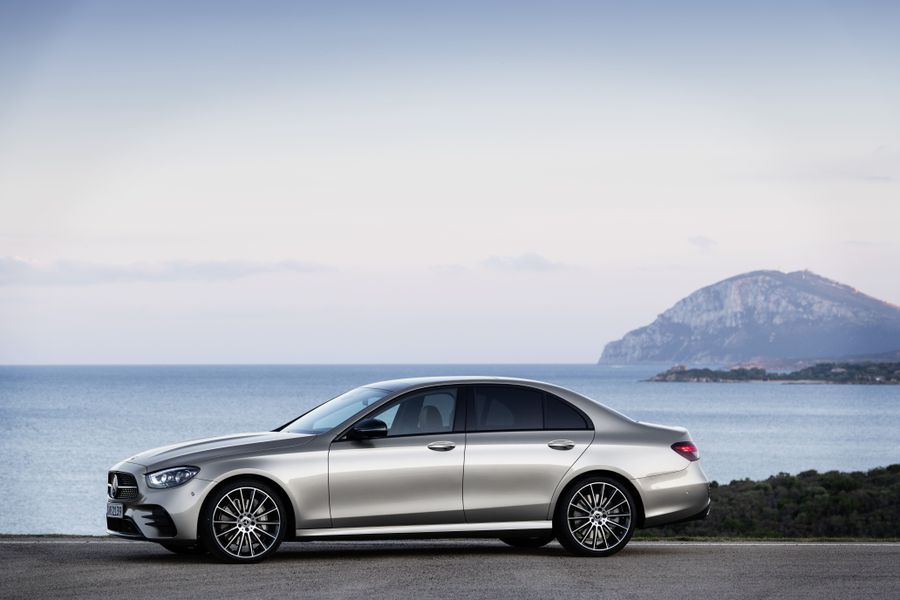 The E-Class is offered in a spectacularly confusing model range that seems to consist of the same words rearranged in slightly different orders, so bear with us here.

The good news is that, even in its cheapest SE form, you’ll be wanting for very little in the way of luxury kit. Included in the list of standard equipment are climate and cruise controls, keyless entry and go, heated front seats with part-electric adjustment, leather upholstery, four electric windows, ambient interior lighting and an infotainment system that brings together Bluetooth, DAB radio, sat-nav and a reversing camera.

The AMG Line is the next model up, and consists largely of a smattering of cosmetic upgrades and a sportier body kit. It’s only available with the hybrid engine, and the same can be said of the AMG Line Premium, which adds memory seats, clever adaptive LED headlights, wireless phone charging and the better infotainment system.

Top of the range of the normal versions is the AMG Line Night Edition Premium Plus, which gets even bigger wheels, a panoramic glass sunroof and a powerful hi-fi system.

The powerful AMG models look even more purposeful, with beefier bumpers and bespoke badging, and they also get a smattering of extra performance upgrades that make them sharper and more honed to drive. 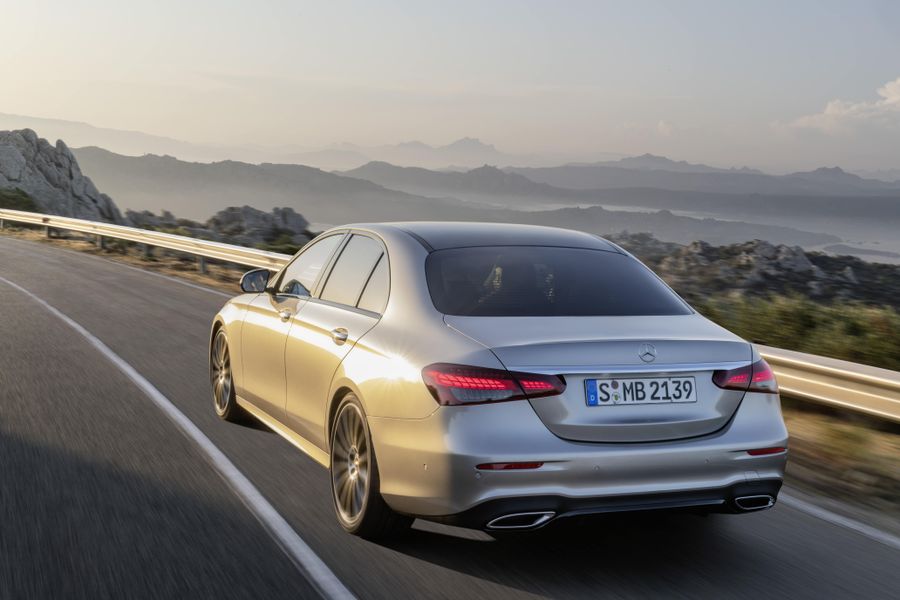 The E-Class is available with five diesel engines, one of which is a plug-in hybrid. The most popular is the 220d, which is handy because it’s all most buyers will ever need.

There’s loads of pull delivered from low down in the rev range, meaning that your progress is always easy, and a fair turn of pace is available when you need it, yet it also stays impressively quiet and smooth most of the time.

The engine also works really well with the nine-speed automatic gearbox you get as standard. The smoothness of the shifts really contributes to the car’s easy-going nature, and when you put your foot down, it always kicks down to the right gear at the first time of asking. It could react a fraction faster, but that’s really splitting hairs.

We haven’t tried the 300d, which is the next rung up and features a 245 horsepower version of the same engine. But we have tried the 300de, a plug-in hybrid that combines the 220d’s engine with an electric motor for a total output of 306 horsepower; the result is a powerplant that feels smooth and muscular at any speed, and can run in total silence on electric power alone when the battery is charged up.

The 300e is even better, with a winning combination of low-down torque provided by the electric motor and a gutsy top end thanks to the rev-happy petrol engine.

If you don’t have the option to plug in, the 350d might provide an alternative, in the form of a 3.0-litre V6 diesel with 258 horsepower; it’s lovely if you can afford it, but it only comes with the more expensive versions, and it’s quite a bit thirstier than the hybrid.

With the exception of the 200, which we haven’t yet driven, all the petrols are powerful AMG offerings. The E43 has a 3.0-litre V6 with 401 horsepower, and while it’s undoubtedly very fast, the slightly reticent power delivery means it doesn’t feel as frenetic as you might expect.

No such problem with the E63, which has a snarling 4.0-litre V8 that delivers a staggering 571 horsepower. It delivers properly explosive pace and an incredible noise, while the 612 horsepower version in the E63 S is even more bonkers. 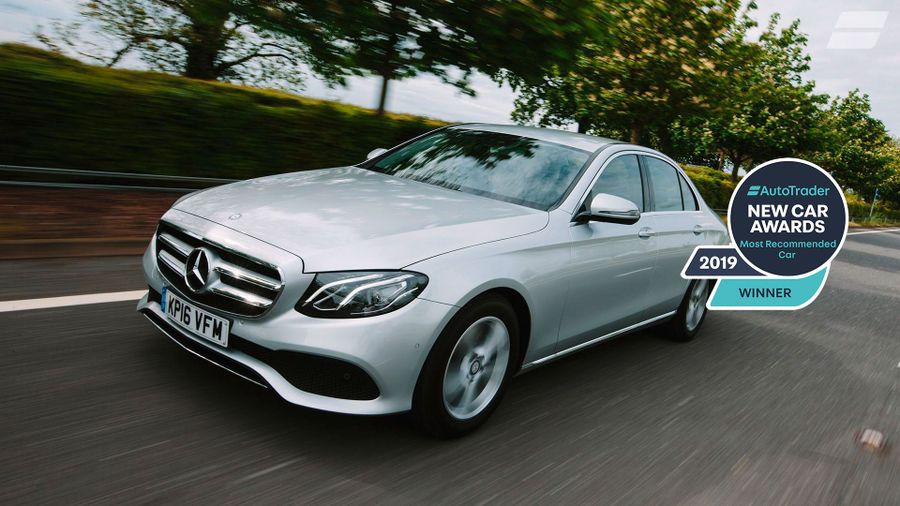