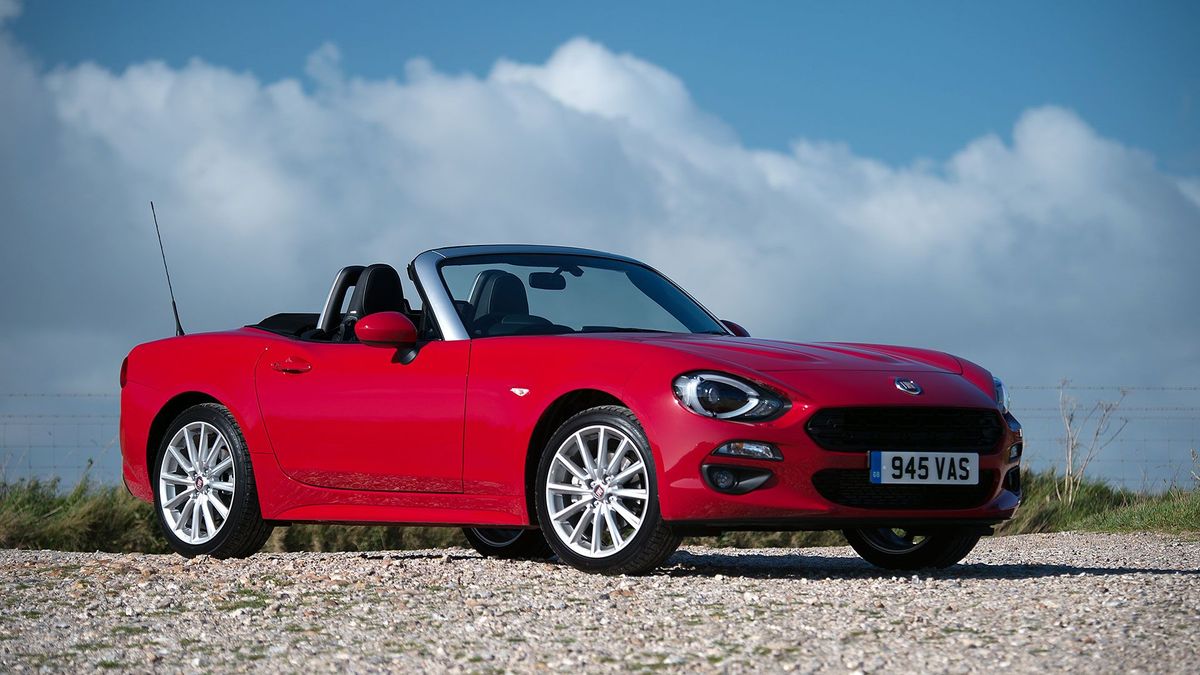 Despite sharing most of its componentry with the Mazda MX-5, the Fiat 124 Spider manages to have a character of its own. Which one you buy will depend on which one you prefer the look of, pure and simple, but either way, you’ll be getting a great little roadster that’s fun to drive and glamorous to look at.

Pick of the range
1.4T Lusso
The right mix of equipment and affordability
Most economical
N/A
For now at least, all 124s are as efficient as each other
Blow the budget
1.4T Lusso Plus
Some desirable extra kit if you can afford to pay the extra 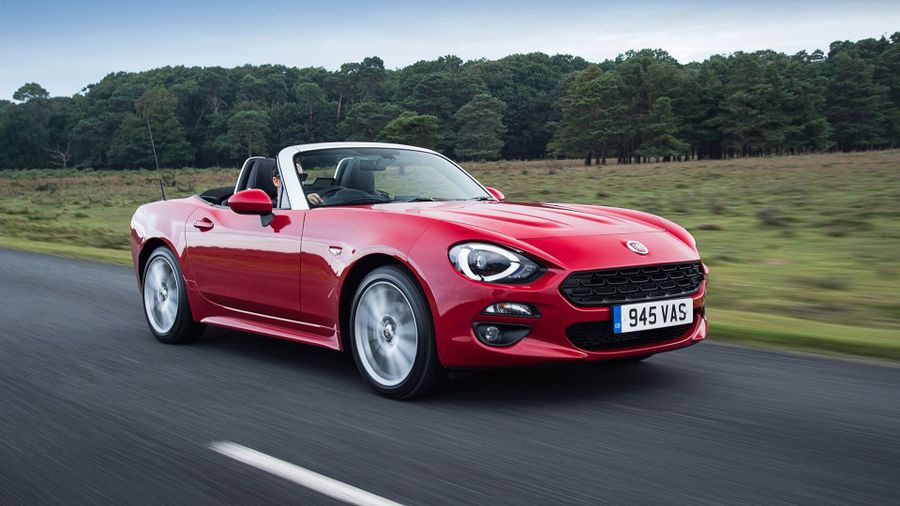 View gallery
“ The Fiat’s lines are softer and more curvaceous than the MX-5. ”

It’s no secret the Fiat 124 Spider shares most of its mechanicals – along with a whole heap of other stuff – with the latest Mazda MX-5. However, given the two cars are so similar in so many ways, it’s surprising how different they look. While the Mazda is all sharp edges and jagged angles, the Fiat’s lines are softer and more curvaceous. The rounded headlamps and wide grille are softened further by the bulges in the bonnet and the curvy front and rear wings, and the chrome finish for the windscreen surround and rollover hoops adds an extra dose of sass. All models have alloy wheels, but you have to upgrade to second-rung Lusso trim for front foglamps, and top-end Lusso Plus trim for LED adaptive headlamps. 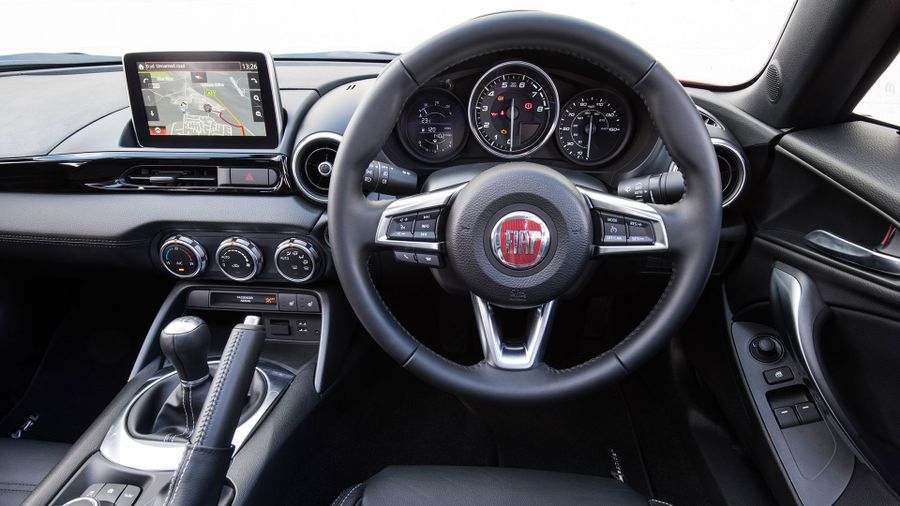 If you’ve ever been near an MX-5, the 124’s cabin will be familiar fare, but there are one or two subtle differences to be found. They don’t lie in the layout; that’s absolutely identical, which means the dashboard controls and touch-screen infotainment system (standard on two of the three trims) are simple to use, but the buttons on the steering wheel could be more clearly marked. The differences lie in the materials on top of the dashboard and doors, which have a soft finish. They don’t look a lot posher than the corresponding panels in the Mazda, but do feel it. The low-slung driving position feels suitably sporty, but while there’s plenty of adjustment on the steering column, you can’t change the height of your seat base, only the angle. This might result in some drivers feeling a little awkward in their seat, especially if they’re tall. The view at the front quarters of the car is clear, but the small rear window means your rearward visibility could be better when the roof is up.

Not an area of deal-breaking importance for any roadster, but even so, the 124 does a decent job. The 140-litre boot has enough space for a couple of soft weekend bags, and the cabin has enough space to keep a couple of lanky adults reasonably comfy. There’s a slightly annoying bulge in the passenger footwell due to the packaging of the transmission, but it shouldn’t detract from your comfort too much. The snap-on cupholders in the central console are a lot less flimsy than they look initially, and one of them can be moved to an alternative position by the passenger’s knees. Handy. The fabric roof has no electric mechanism – you simply unclamp it from the top of the windscreen and toss it backwards – but it’s easy to operate and does mean you can fold or reinstate the roof very quickly. However, refinement isn’t exactly flawless when you’re driving in open-air mode, because you feel a fair amount of buffeting from the wind. Things are pretty noisy with the roof in place, too. 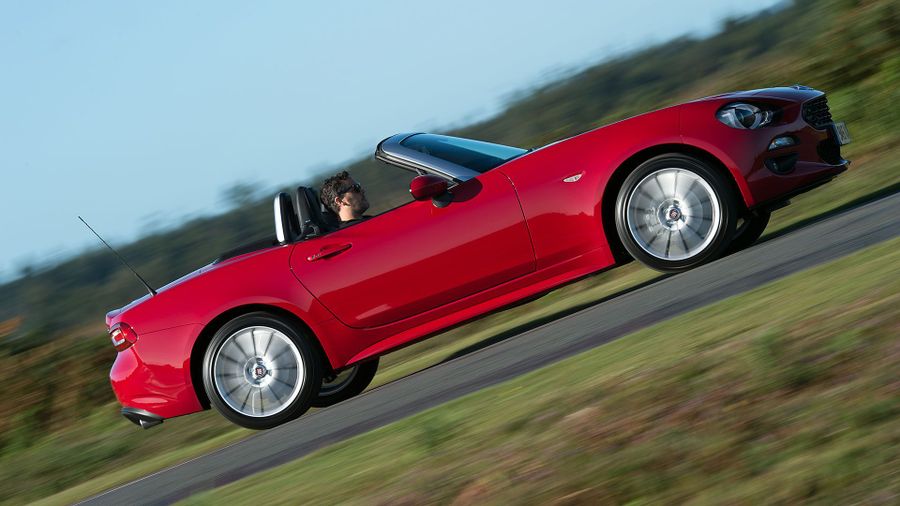 View gallery
“ It’s terrific fun flinging the car from one bend to the next when blatting across country. ”

Although using MX-5 mechanicals gave Fiat an extremely good baseline from the beginning, the firm insisted on implementing its own settings for things like the suspension and steering to give the 124 its own ‘Fiaty’ feel. The differences can be felt if you really concentrate – the suspension feels a fraction more compliant and the steering doesn’t quite have the same level of connection – but the essential character of the car remains the same. The rear-drive layout, combined with strong grip, tight body control and impeccable balance mean it’s terrific fun flinging the car from one bend to the next when blatting across country. The ride stays largely supple, too, even in town where urban ruts and potholes are mopped up impressively well. If you want your roadster to be the ultimate precision tool, the Mazda will probably suit you better, but the 124 delivers no shortage of fun.

Rather than use the same naturally aspirated petrol engines as the MX-5 – both of which require lots of revs for best effect – Fiat decided to endow the 124 with a 138bhp 1.4-litre turbocharged unit for an extra dose of responsiveness. Sadly, the effect isn’t entirely successful. Fewer revs are needed to get the Spider scuttling at a decent rate, but as turbocharged engines go, it still needs to be spinning at a fair old rate before the boost chimes in properly. And until it does, the acceleration you feel is a little on the lacklustre side. The Mazda engines give a more linear build-up of speed, and revving them out is half the fun. That said, the Fiat engine’s throaty sound is very appealing, and like in the Mazda, the short-throw gearshift is one of the most satisfying you’ll find in any car. 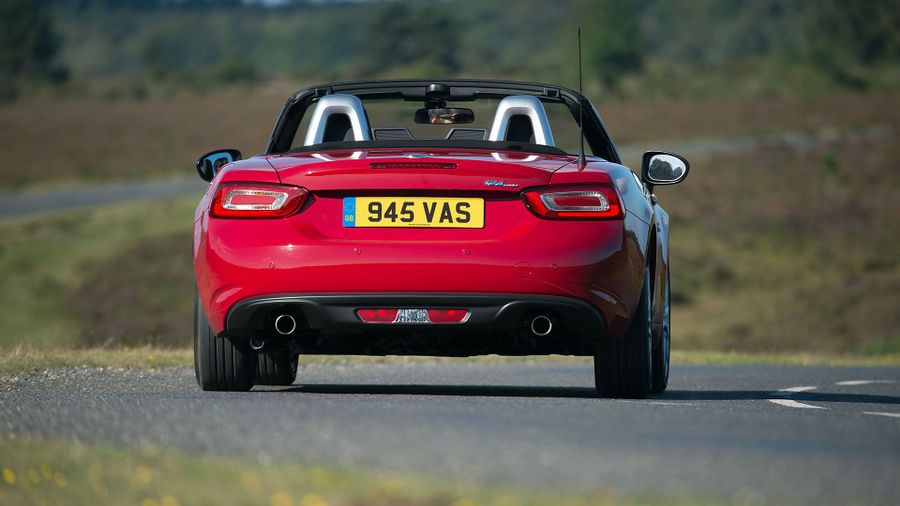 View gallery
“ Unsurprisingly, the Fiat 124 Spider costs a similar amount to the MX-5. ”

Unsurprisingly, the Fiat 124 Spider costs a similar amount to the MX-5, but you’ll be able to snaffle the Mazda for slightly less. In theory, the Fiat’s small-capacity turbocharged engine should make it more economical than the naturally aspirated Mazda, but in reality, there isn’t a great deal of difference, with the 124 returning official figures of 44.1mpg and CO2 emissions of 148g/km.

Prospective owners can take heart from the 124’s links with the MX-5, a car that’s often been lauded for its reliability and longevity over the years. The amount of Mk1 MX-5s you still see rolling about the place bears testament to its hardiness. Only time will tell if the latest MX-5 and 124 can match the standards set by their forebears. According to the Warranty Direct Reliability Index, Fiat doesn’t do too badly in the reliability stakes, either. The brand currently sits in a very solid position in the top half of the manufacturer rankings. 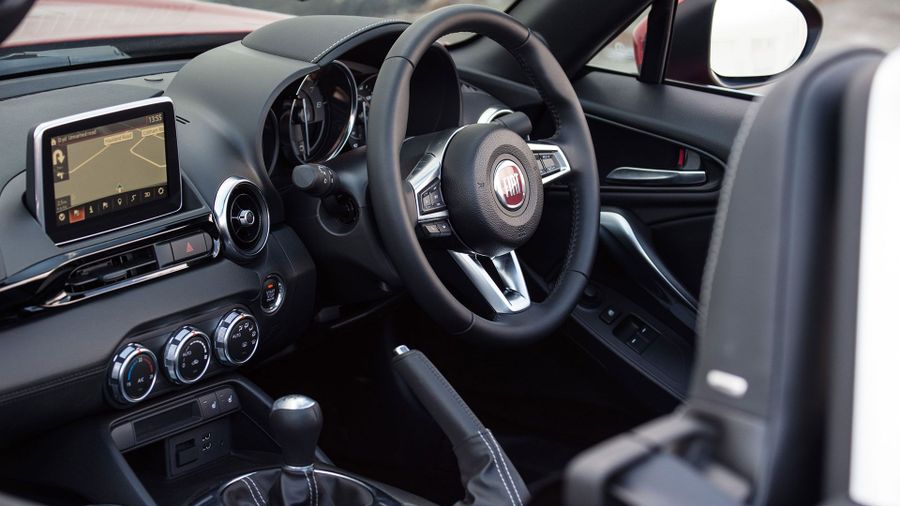 View gallery
“ The 124 Spider gets most of the safety gear you’d expect in a car like this. ”

The 124 Spider gets most of the safety gear you’d expect in a car like this, but don’t go expecting it to go the extra mile. Four airbags and stability control are provided, but it doesn’t get a whole lot cleverer than that. The car hasn’t yet been crash tested by the experts at Euro NCAP, but the Mazda MX-5 has, and it achieved four-out of the five available stars.

The range begins with Classica trim, and this version provides you with manual air-con, a leather steering wheel, keyless go, Bluetooth and cruise control. Lusso models cost a fair slice more, but we’d say the upgrade is worth it because it provides a lot of desirable stuff including a DAB radio, climate control, rear view camera, leather upholstery, heated seats and rear parking sensors. Lusso Plus trim adds automatic lights and wipers and an upgraded sound system. 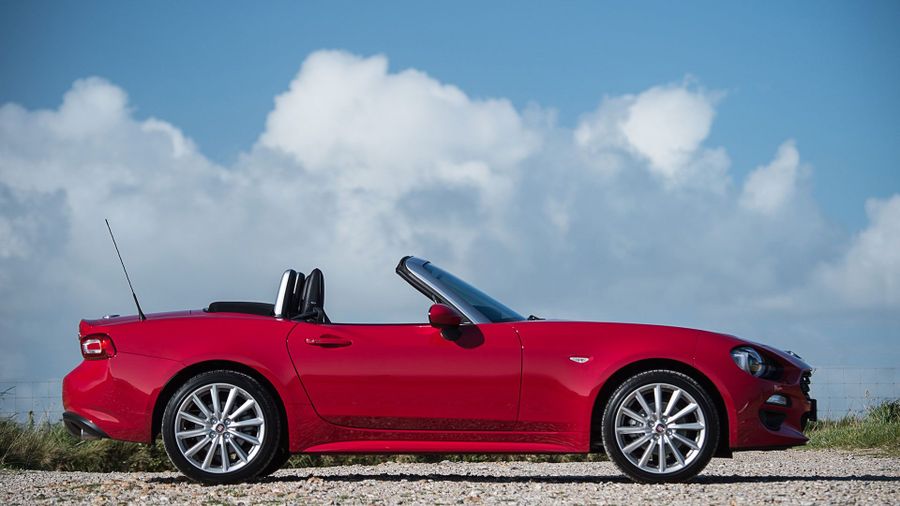 Quite simply because you prefer its looks to those of the Mazda MX-5. Although they share pretty much everything, the two cars do manage to have distinct characters, but the aesthetics will still be the major reason you pick one over the other. The Mazda is the sharper car to drive, while the Fiat is more stylish and laid back. Whichever one you choose, though, you’ll absolutely love it. 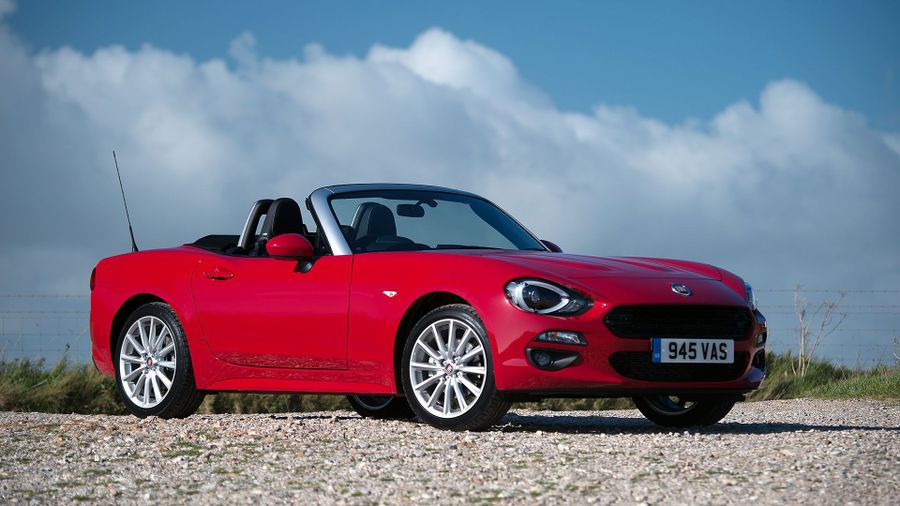