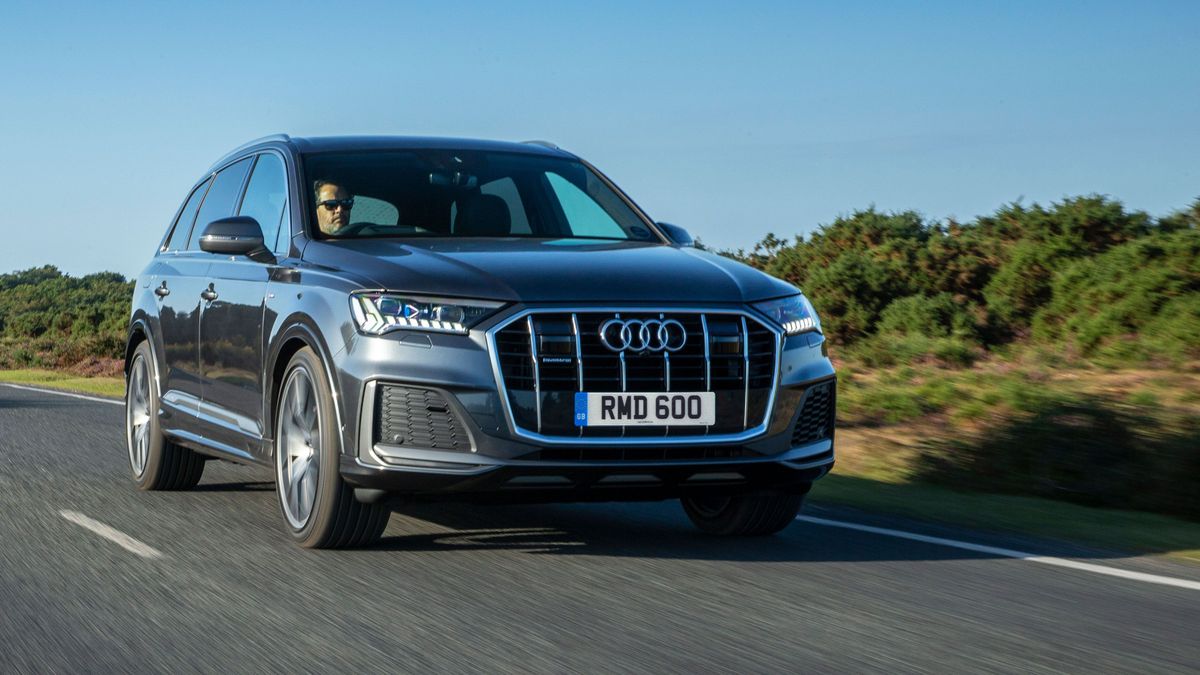 The Q7 has always been an impressive seven-seat premium SUV and a mid-life refresh has done nothing to change that. New engines make it more economical on fuel, and the interior additions mean it has some state-of-the-art technology to go with its impressive comfort and sophisticated driving manners. It’s also one of the most spacious cars of its type, which means it will have plenty of appeal to families. 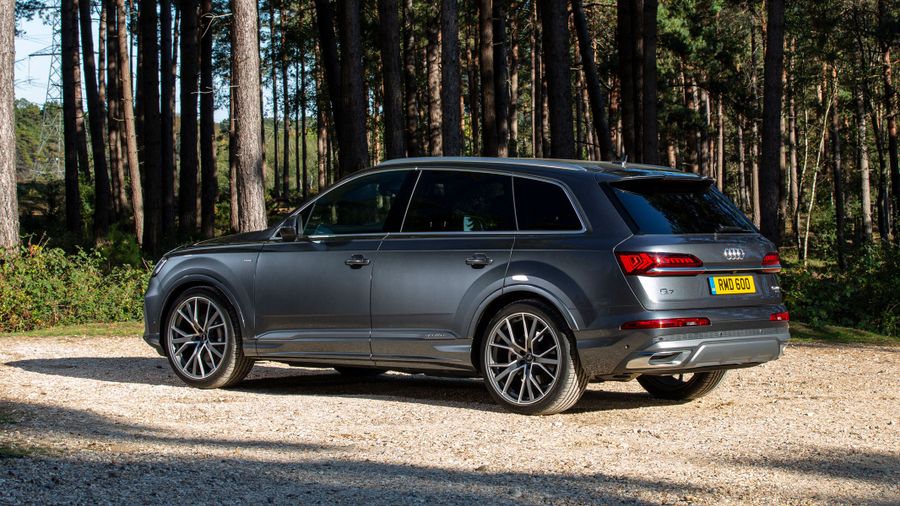 The Audi Q7 is priced competitively against its rivals. It’s certainly not the cheapest premium SUV around, but it’s broadly similar in cost to the BMW X5 and Volvo XC90. That said, pricing isn’t normally a deal-breaker with cars like these: you don’t pick the cheapest one, you pick the one you want. Fuel economy is very competitive on all the engines, and CO2 outputs are competitive, too. The official efficiency figures look especially impressive on the plug-in hybrid versions, and although you’ll do extremely well to match these in the real world, they do result in some very compelling tax breaks, most notably for company car drivers. Audi resale values are traditionally strong, which helps considerably with whole-life costs. 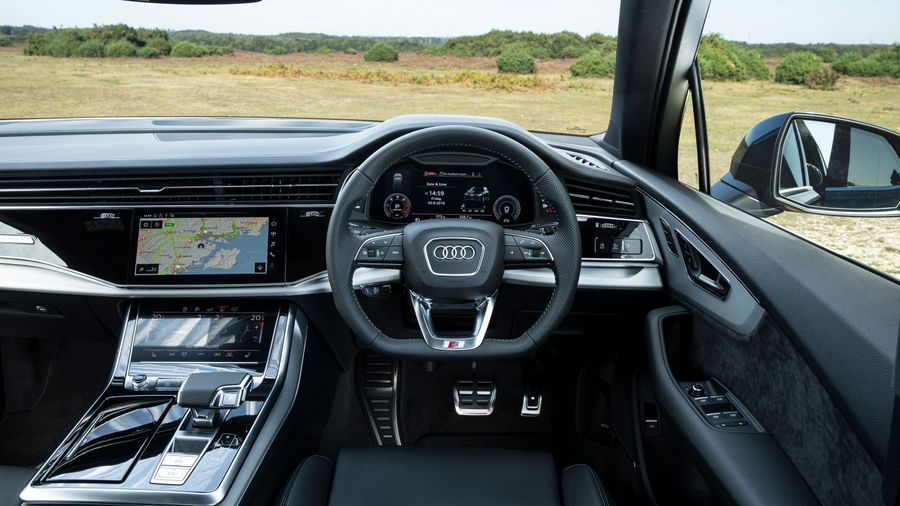 The solidity of the Audi Q7 gives you the impression it’ll last forever, but according to several industry studies, that’s an impression that might prove misleading. The previous generation of Q7 has a rock-bottom score on Warranty Direct’s Reliability Index, and as a brand, Audi sits worryingly close to the bottom of the manufacturer rankings. The same is true of JD Power’s 2019 Vehicle Dependability Study, which puts Audi third from bottom, although it is at least above BMW. Should anything go wrong with your Q7, Audi offers a three-year, 60,000-mile warranty on the Q7, which is par for the course for this type of vehicle. 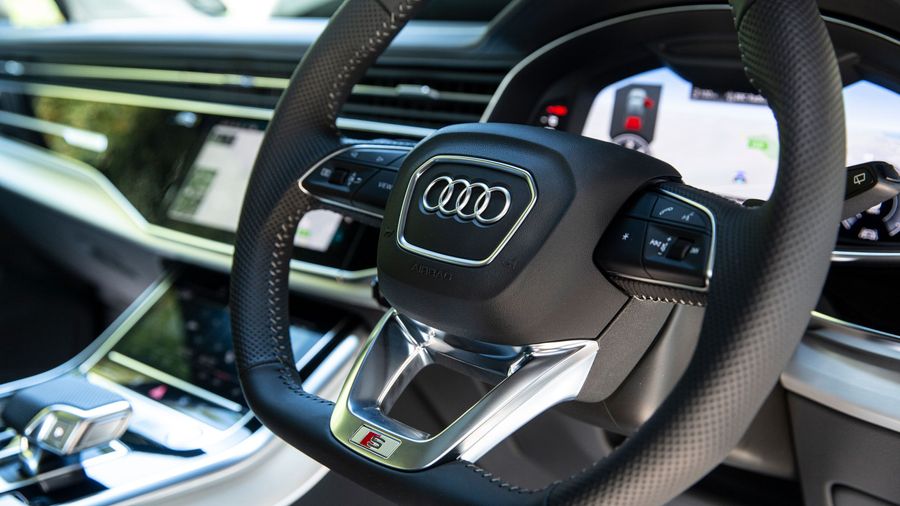 The Audi Q7 comes as standard with plenty of features to protect you and your family. As well as the six airbags and stability control that you expect as a minimum, you also get all sorts of other traction aids, lane departure warning and an autonomous low-speed braking system. More advanced systems are only optional on models below the Vorsprung. These include Pre Sense Basic - a system that prepares the car in case of an accident by tensioning seatbelts and closing windows – and cross-traffic assist to let you know if there are oncoming vehicles when emerging from a parking space. Great for families is the standard inclusion of six Isofix child seat mounting points (five in the back, and one on the front passenger seat).

How comfortable is the Audi Q7 4/5 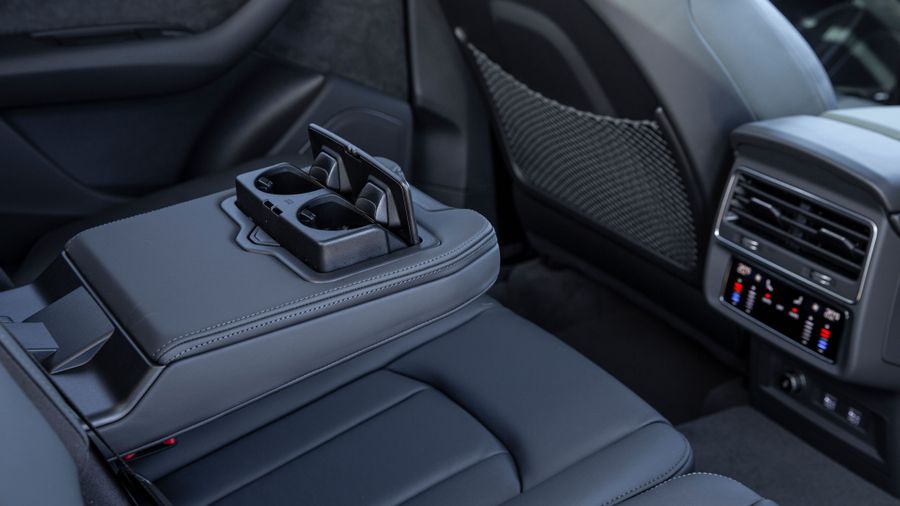 The cabin has a very digital approach that sees a digital instrument panel for all models and two touchscreens. The upper one shows general infotainment systems like sat-nav and stereo functions, while the lower one replaces traditional air-conditioning controls and information about what drive mode you’re in. The set-up looks great and is pretty easy to navigate around, but the screens are magnets for fingerprints and not as easy to use as buttons or dials when you’re driving.

The driving position has plenty of adjustment and the seats are nice and comfortable, and visibility is pretty good too. Build quality, as we’ve come to expect from Audi, is excellent with everything feeling really solid, well-made and well put-together.

When you buy a car as big as an Audi Q7, you expect space, and it delivers in spades. All cars (except the plug-in hybrid versions) come as standard with seven seats, and although you can specify five seats if you prefer, very few customers do. There’s loads of space in the second row for three tall adults, and if you slide the seats forward a bit you can also fit two adults in the third row, too, although taller grown-ups will find headroom pretty tight. These rear-most seats rise individually out of the boot floor and are electrically controlled from either the inside of the boot or each rear side door, which makes popping them up and down very easy. Fold all the seats down and you have a huge amount of space – 2,050 litres - and even with all of them occupied, you still get a decent-sized boot. All-in-all, it makes for a very flexible vehicle.

Families will be very pleased that all five rear seats have an Isofix child seat mounting point. If we had to nit-pick, there could be more cubby holes around for odds and ends, as the space under the front centre armrest isn’t huge. But there are still good-sized door pockets and cupholders to keep things in.

The Q7 comes as standard with air suspension, which lets you switch between different driving modes to focus on comfort or a more dynamic set-up. Comfort mode is aptly named, as it massages the road's imperfections out very well, although can give a slightly floaty ride and vague steering. Dynamic is stiffer and lets more road surface information into the cabin, but it also sharpens up the steering. Both modes are entirely acceptable though, and we found that leaving it in Auto mode and letting car choose when to switch settings was the best option.

What’s particularly impressive is that the comfort doesn’t come at the expense of surefootedness, with the suspension keeping the Q7 composed through the corners, which is no mean feat in a car with this much weight behind it. Black Edition and Vorsprung cars come with a sportier version of this air suspension, which we’ve yet to try. Higher spec versions also come with four-wheel steering, which tightens the turning circle at lower speeds and makes it far more manoeuvrable than a car of this size has any right to be. 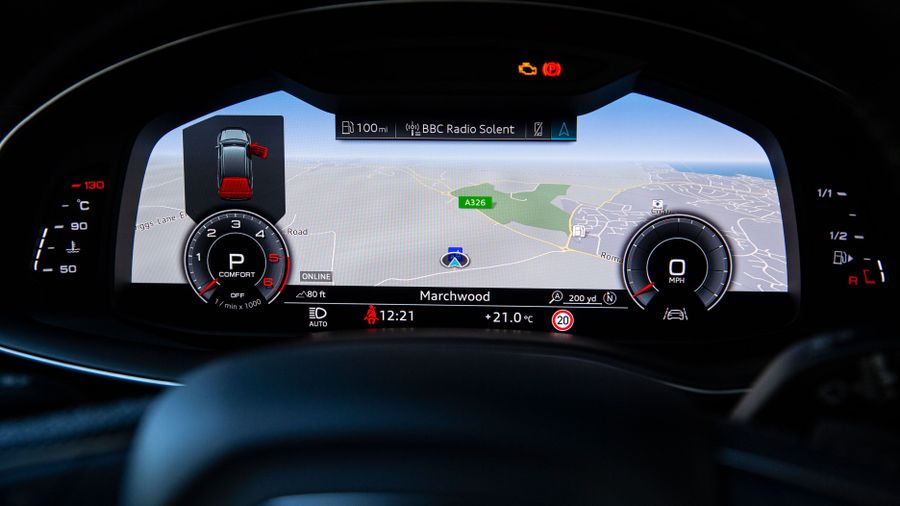 There are four trim levels to choose from, starting with the Sport model, which features 19-inch alloy wheels, LED headlights and bumpers in a contrasting grey paint finish. The S line model’s bumpers have the same paint as the rest of the car, as well as 20-inch wheels, a roof spoiler, side skirts and side vents. The Black Edition has black 21-inch wheels and various other black bits including roof rails, grille frame, door inlays and window trims, while the top-of-the-range Vorsprung has 22-inch wheels and even brighter headlights.

When it comes to the interior, all of the Q7s come with a long list of features, as you’d expect for a premium product at a premium price. The entry-level Sport model has leather-covered, electrically adjustable and heated front seats, matrix LED front headlights that let you use high beam without dazzling oncoming traffic, all the latest touchscreens and the digital instrument panel and a ten-speaker sound system. On top of that you get an electrically operated boot lid, front and rear parking sensors, a rear-view camera and two-zone climate control air-conditioning.

Upgrade to the S line, and you’ll get snugger front sports seats covered in nicer leather, a black cloth headlining and some brushed aluminium inlays inside, as well as a different steering wheel design. The Black Edition, meanwhile, upgrades the air-con to four-zone climate control, and gets polished oak interior inlays and another steering wheel design.

The top-spec Vorsprung gets super-powerful laser headlights, electric door closure mechanisms and heated rear seats on the second row. In addition, the front seats get a ventilation function for hot days, and a massage system, and there are sunblinds for the rear windows. You also get a head-up display and a Bose sound system. 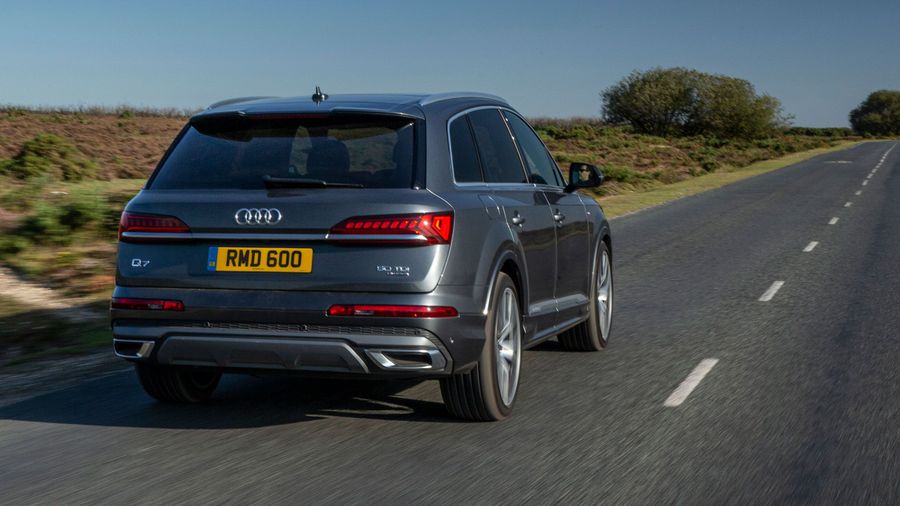 Mainstream buyers will choose between three 3.0-litre V6s – two diesels and a petrol – all of which are fitted with a mild hybrid system. This adds a battery to provide a bit of extra grunt, which can be recharged by lifting off the accelerator or braking, helping to improve fuel economy.

The diesel range starts with the 45 TDI, which has 231 horsepower, and moves up to the 50 TDI, which has 286 horsepower. This is the diesel we’ve tried so far, and it looks like being the pick of the bunch, with plenty of effortless grunt low down in the rev range, and just the right characteristics to haul a large, fully loaded luxury bus around. It is a little bit noisy at lower speeds, though.

The 55 TFSI is the petrol version, and while it has 340 horsepower it doesn’t feel appreciably quicker than the diesel. It also won’t get such good fuel economy, either, but if you’re anti-diesel for whatever reason then the petrol still does a very good job. It’s smooth and still strong at the lower end of the rev range, and plenty of power for when you need a quick overtake or a blast onto a motorway on-ramp. 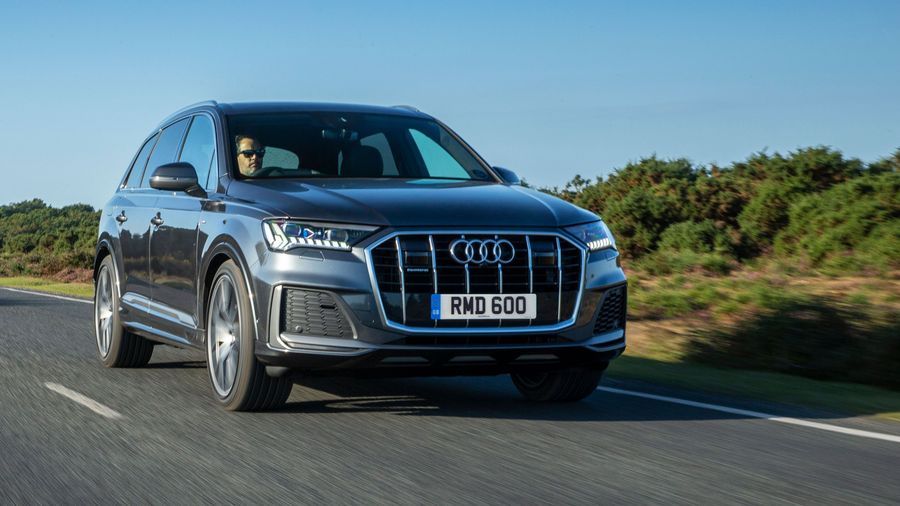