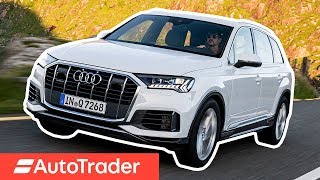 The Q7 has always been an impressive seven-seat premium SUV and a mid-life refresh has done nothing to change that. New engines make it more economical on fuel, and the interior additions mean it has some state-of-the-art technology to go with its impressive comfort and sophisticated driving manners. It’s also one of the most spacious cars of its type, which means it will have plenty of appeal to families.
Our verdict

Running costsSafetyFeaturesReliabilityInteriorPerformance
The Audi Q7 is priced competitively against its rivals. It’s certainly not the cheapest premium SUV around, but it’s broadly similar in cost to the BMW X5 and Volvo XC90. That said, pricing isn’t normally a deal-breaker with cars like these: you don’t pick the cheapest one, you pick the one you want. Fuel economy is very competitive on all the engines, and CO2 outputs are competitive, too. The official efficiency figures look especially impressive on the plug-in hybrid versions, and although you’ll do extremely well to match these in the real world, they do result in some very compelling tax breaks, most notably for company car drivers. Audi resale values are traditionally strong, which helps considerably with whole-life costs.

With 37 new and 1,241 used Audi Q7 cars available on Auto Trader, we have the largest range of cars for sale across the UK.