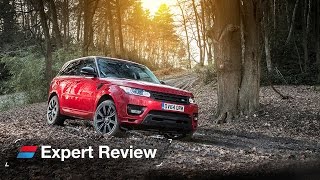 Fancy your Range Rover with a little more Sport? Well then, you’ve come to the right place. The Range Rover Sport sets out to deliver environs almost as opulent as its full-fat stablemate’s, but with a touch of extra athleticism thrown in. It goes head-to-head with the BMW X5, Porsche Cayenne and Audi Q7.
Our verdict

Is the Land Rover Range Rover Sport a good car?

Running costsSafetyFeaturesReliabilityInteriorPerformance
It’ll come as no surprise whatsoever that you won’t be able to run a Range Rover Sport on a shoestring, but when compared against rivals it’s actually not bad value. There are several versions to choose from, at prices that range from around £65,000 to over £100,000, but broadly it competes against cars like the Porsche Cayenne and BMW X5.

While the Land Rover can be slightly pricey in comparison, we’d expect the Range Rover Sport to cost similar amounts to run as those rivals, as while the Porsche will likely hold its value better, it’ll be much more to service, maintain and repair, while the X5 is unlikely to fetch as much as the Range Rover Sport when you come to sell it on.

With 51 new and 3,473 used Land Rover Range Rover Sport cars available on Auto Trader, we have the largest range of cars for sale across the UK.