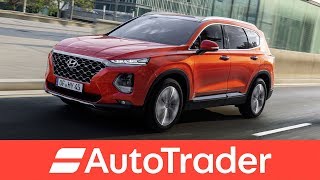 The Hyundai Santa Fe gives buyers the style and the high driving position they want, along with the practicality, comfort and versatility they need. It can’t quite match the very finest seven-seat SUVs on offer because it’s not as affordable and not as polished to drive as some, but it is a very solid all-rounder and worthy of any family’s consideration. An updated version with more premium feel and new hybrid engines is due in the Autumn.
Our verdict

Is the Hyundai Santa Fe a good car?

Running costsSafetyFeaturesReliabilityInteriorPerformance
Compare the Santa Fe with its most direct rival – the Kia Sorento – and the pricing is much of a muchness. However, there are other similarly-sized seven-seater SUVs – cars like the Skoda Kodiaq and Peugeot 5008 – that you can pick up for a lot less. That’s partly to do with the fact that you can have them with smaller, less powerful engines, and that also means those rival cars will be more efficient on paper, although the Santa Fe doesn’t compare too badly against like-for-like versions.

At the time of writing details are yet to be confirmed but Hyundai has confirmed an updated Santa Fe is on the way in Autumn 2020 and will include hybrid and plug-in hybrid options among a range of styling and equipment upgrades. Expect good deals on existing Santa Fe models in the run-up to this.

With 35 new and 502 used Hyundai Santa Fe cars available on Auto Trader, we have the largest range of cars for sale across the UK.