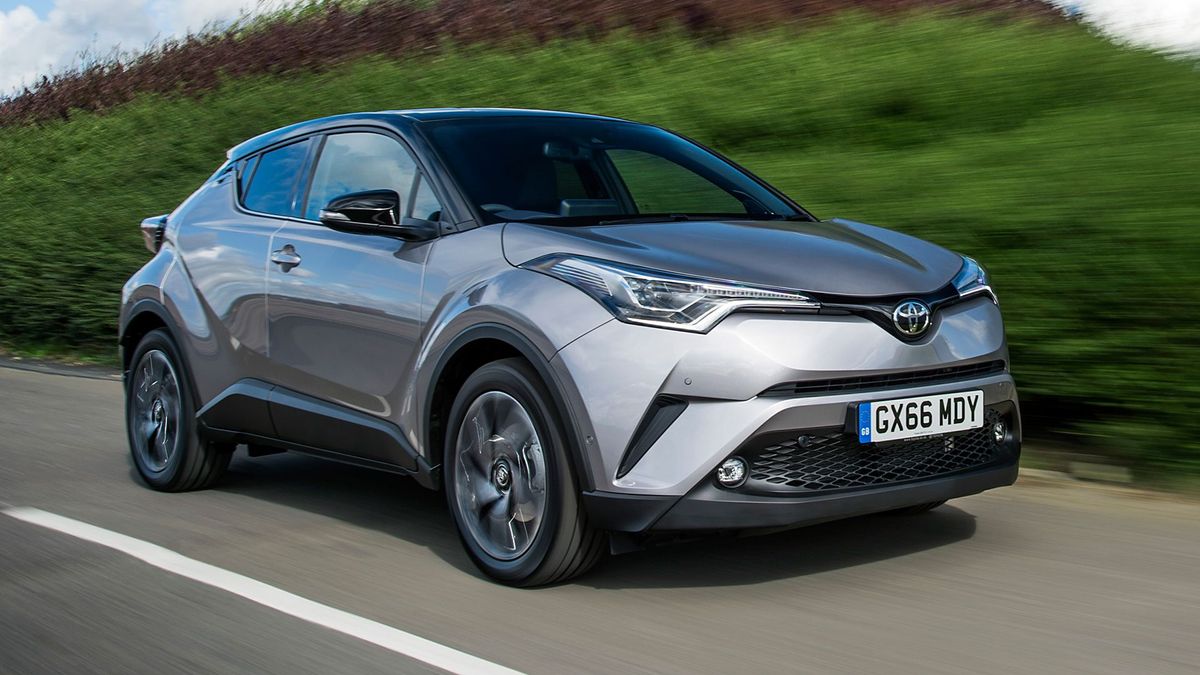 First published: 17th November 2016
Share on Facebook on Twitter
Auto Trader Verdict:
The Toyota C-HR may be very late to the small SUV party, but its arrival was definitely worth the wait. It looks the business, it’s good to drive, it’s reasonably practical and it’s very well equipped. Style-conscious SUV buyers will absolutely lap it up.
Need to know:
What is it?
Frankly, about bloomin’ time for Toyota. You see, compact SUVs are so immensely popular these days that no car manufacturer can really afford to do without one, and with the C-HR, Toyota has only just made it to the party.

That said, the car’s elaborate party frock ensures it makes one heck of an entrance. The styling is an intriguing mish-mash of unconventional proportions, futuristic shapes and aggressive lines, and it gives the car an unusual yet super-sharp look. And, with SUV buyers being a generally very fashion-conscious bunch, the looks alone will find the C-HR a lot of fans.
What is it like?
The futuristic theme continues on the inside, with a modern-looking dashboard that’s been freed of all unnecessary buttons and switches, with most functions being controlled through the central touchscreen system. It’s not the most intuitive system to operate and takes quite a while to get to grips with, but it does look pretty snazzy.

So do many of the cabin materials, which have touchy-feely finishes in all the right places. And, aside from one rather brittle-feeling panel in each of the front door trims, the plastics throughout are of a uniformly high standard. You’ll also like the supportive seats that keep you very comfortable, and the large amount of adjustment you’ll find in the C-HR’s driving position.

What you won’t like so much about the driving position, though, is the terrible over-the-shoulder visibility you get due to the ridiculously thick rear pillars blocking your view at the rear quarters of the car. These – plus rear windows that are small, shallow and high-set – also mean that the back seats get hardly any natural light, making it a rather murky and depressing place to sit. Your nippers won’t see much out of the rear windows, though. It’s all something of a shame, because the space back there is actually pretty good, plenty generous enough for a pair of six-foot adults to sit in comfort. A wide middle seat and a flat transmission tunnel means fitting three in the back isn’t out of the question, either.

A decently sized 377-litre boot also helps towards a decent level of practicality, but there is a pretty hefty lip to load items over, and also a pretty big step in the floor when you fold the back seats down. 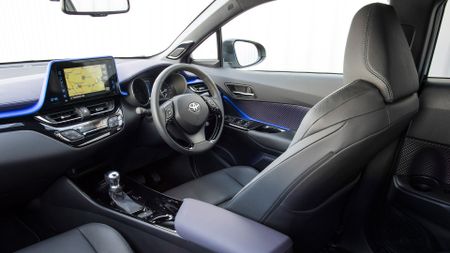 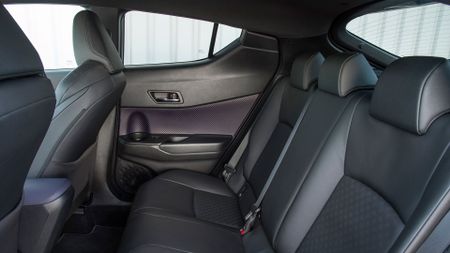 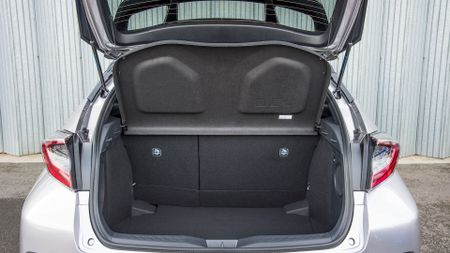 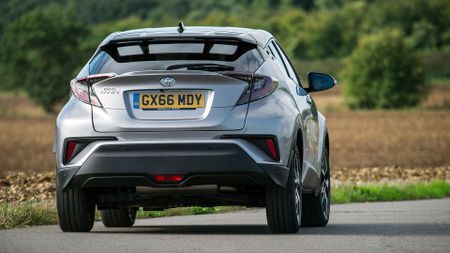 View gallery
With C-HR standing for ‘Coupe High Rider’, which could be seen as a little contradictory, it would’ve been very easy for the car’s dynamic performance to have turned out a little bit, well, schizophrenic. Thankfully, that’s not the case, and the C-HR is a very well-sorted machine. The suspension strikes a very good balance between comfort and control, giving enough compliance to smooth out the majority of lumps and bumps, but enough stiffness to deliver crisp body control in the bends. The plentiful grip helps on the handling front, too, as does steering that’s consistent in its speed and responses, even though the remote feel you get through the wheel will leave you guessing on how much mid-corner grip you have in reserve.

The turbocharged 1.2-litre petrol engine that forms the entry-point into C-HR ownership is another high point. Granted, it can struggle to get going at the very bottom of the rev range, especially if you’re pointing uphill, but once there are a few revs on the dial, it pulls you along very easily, and with a surprising amount of purpose. It’s a smooth and quiet little engine, too, although, the notchy manual gearshift and rather overbearing levels of wind- and road-noise do harm the car’s overall refinement.

We also had a shot in the hybrid version, and this one isn’t nearly as appealing. The performance feels much more laboured the whole time, and the continuously variable transmission sends the engine revs shooting all over the place, even when you’re driving the car relatively gently. Plod along at a constant 70mph on the motorway, for instance, and the drone you hear from under the bonnet will vary in its volume and pitch every few seconds.
Should I get one?
If you like the brash looks, then you’ve probably already made up your mind that you’re going to. And if you do, you’ll be getting a car that also happens to be very well equipped. Even the entry-level Icon trim comes with climate control, alloy wheels, front fog lamps, automatic lights and wipers and an extensive suite of safety systems that includes, among many other things, nine airbags and automatic emergency braking. Excel trim adds desirable features like part-leather upholstery, keyless entry, heated seats, parking sensors and sat-nav, but also adds a fair chunk to the price. The extra cash you pay for Dynamic models earns you metallic paint, privacy glass and LED headlights.

True, the C-HR does cost a little more to buy than the equivalent Nissan Qashqai, and it’s not as efficient, either. However, the margins in either area aren’t exactly huge, and certainly won’t be of deal-breaking proportions for a lot of style-conscious buyers.

Toyota’s decision not to offer a diesel model might limit its appeal for some buyers, especially when such engines are so popular with buyers of the C-HR’s rivals. However, if you feel no particular allegiance to diesel, and you’re more interested in being responsible for the dropped jaws of passers-by, then the C-HR should definitely feature on your SUV shopping list.
Key facts:
Also consider:
Nissan Qashqai
The car that spawned a legion of SUV lookie-likies from every manufacturer under the sun

Peugeot 3008
A new alternative in the crowded SUV marketplace, and a very convincing one at that

Renault Kadjar
Mechanically identical to the Qashqai, but slightly cheaper and with a different look 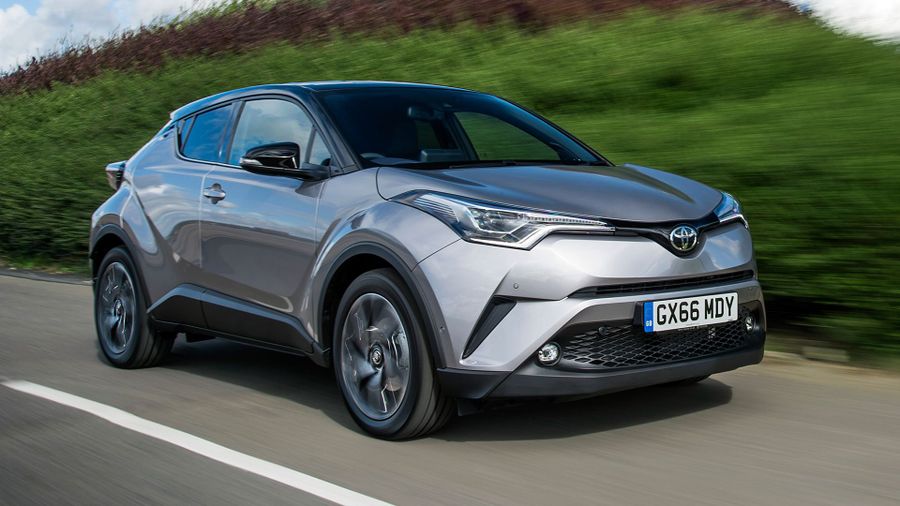