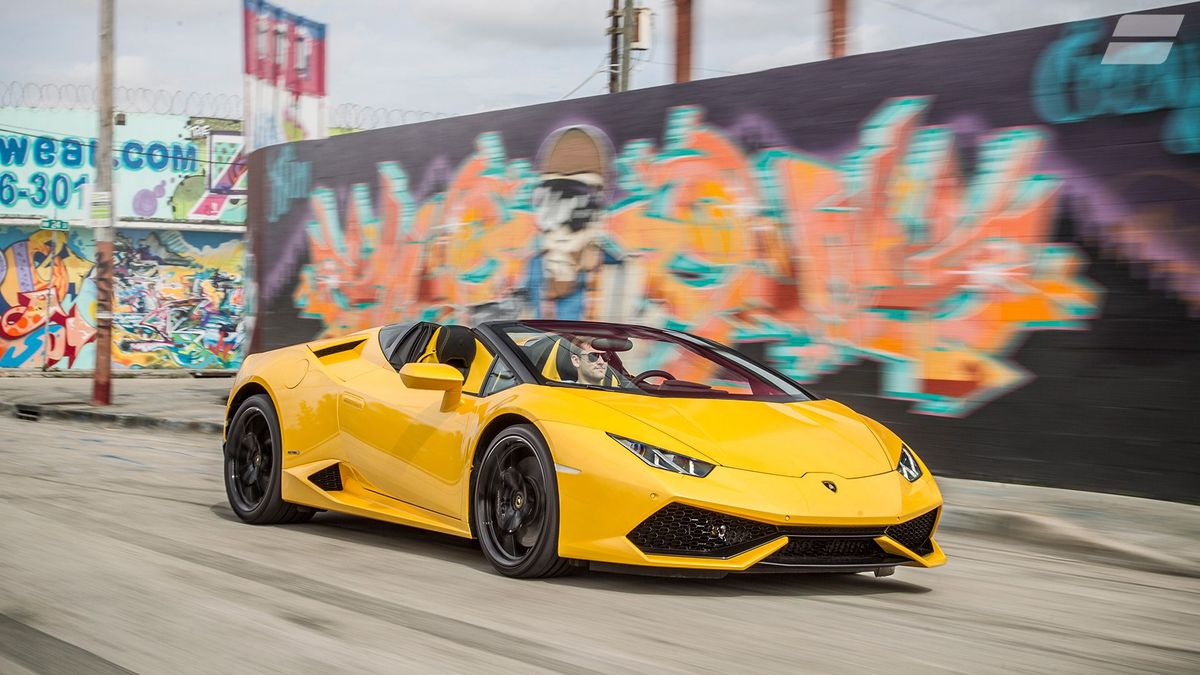 View gallery
View gallery
First published: 2nd February 2016
Share on Facebook on Twitter
Auto Trader Verdict:
In a supercar landscape that is dizzy with forward motion and mechanical evolution, it’s almost reassuring to see Lamborghini continuing to preach at the altar of natural aspiration. And the world is a much better place for it. The Spyder isn’t the fastest, most dynamic or technically advanced supercar on sale, but it has an aura, a soundtrack and a user-friendliness that other exotics will find tough to beat.
Need to know:
What is it?
It’s the Lamborghini Huracán Spyder LP610-4, the drop-top version of the Italian firm’s best-selling supercar. It features the same four-wheel drivetrain and seven-speed dual clutch gearbox as its fixed-roof sibling, as well as the 602bhp 5.2-litre V10 power unit. Roof up or down, 0-62mph takes 3.4 seconds and the Spyder tops out at a toupe-threatening 201mph, so this isn’t a car for Mr. Donald Trump.

The Huracán doesn’t follow the aero-influenced style sheet of the latest Ferrari supercars, but instead prefers angry, razor-sharp angles that would encourage anybody to move to the slow lane if one loomed large in your rear-view mirror.

The three-layer fabric roof is available in three colours – black, brown and red – and features a rubber lining to improve cabin refinement. It also benefits from a retractable rear glass window that can be operated independently. The roof can unfurl in just 17 seconds and at speeds of up to 31mph to reveal a high, reprofiled decklid and a pair of pronounced buttresses. Not only do they conceal the pop-up crash bars, they feature integrated air ducts designed to reduce wind recirculation in the cabin, so occupants don’t suffer any unscheduled or unruly blow-dries.

Carbon-ceramic disc brakes and 20-inch forged alloy wheels are standard, but the options on our Giallo Midas (very yellow) test car include electronically controlled dampers, a hydraulic lift for the nose and a sports exhaust. Beyond that, says Lamborghini, 40% of its customers also take advantage of the bespoke Ad Personam service, where the options list is as big as your imagination.
What is it like?
If it’s noise you’re after, then no new-era, turbocharged supercar comes close. The Huracán Spyder is a salutary reminder about the soon-to-be-extinct joys of the naturally aspirated engine. Lowering the roof simply gets you a front-row seat for that 10-cylinder symphony, and your right foot plays the role of conductor.

The experience is made all the more lucid thanks to the Spyder also benefiting from a sweet-shifting dual-clutch gearbox that you operate via two large steering column-mounted paddles.

Truth be told, our test route in downtown Miami wasn’t the most challenging, but it still offered plenty of chances to sample real-world scenarios, which showed that the light steering, good low-speed manners and compliant ride will make peacocking around Knightsbridge very easy. And on the occasional dual carriageway, it was still very easy to terrify myself and co-driver in the raciest Corsa driver mode. In every situation, the Spyder remained taut and composed, thanks to a carbonfibre and aluminium structure that is 40 per cent stiffer than that in the old Gallardo Spyder.

There’s no question that the Huracán Spyder offers less lunacy when compared with Lamborghinis of yesteryear, but that decision to build more usability and refinement into these cars is arguably being vindicated by the sales performance of the company.

One thing that never changes is the amount of attention this car and this badge receive. On more than one occasion, scores of schoolchildren attempted to chase our car down for a profile picture that would summon three-figure Facebook ‘likes’.

Unfortunately, there are a few niggles: at 1542kg, the Spyder weighs in a substantial 120kg heavier than the coupe, the driver’s seat is set too high and doesn’t recline far enough for tall drivers and because of that high rear deck, the rear view mirror only works if there’s a bus behind you.
Should I get one?
There are genuine packaging constraints for taller drivers, and supercar aficionados may prefer a more challenging steer. However, if you’re looking for a supercar that offers unprecedented levels of kerbside appeal, an evocative soundtrack and accessible dynamics that will make even the most inexperienced driver feel like a hero, then the Huracán Spyder is tough to beat.
Key facts:
Also consider:
Ferrari 488 Spider
More responsive and engaging to drive, but turbocharged V8 cannot match aural heights of a naturally aspirated V10

Porsche 911 Turbo S
Comparatively soulless when set against the Spyder, but an even faster point-to-point car and even easier to drive. Also available as a convertible

Audi R8
Shares much of its mechanical architecture with the Huracán, yet it’s the Audi that is the more engaging drive. Spyder version imminent 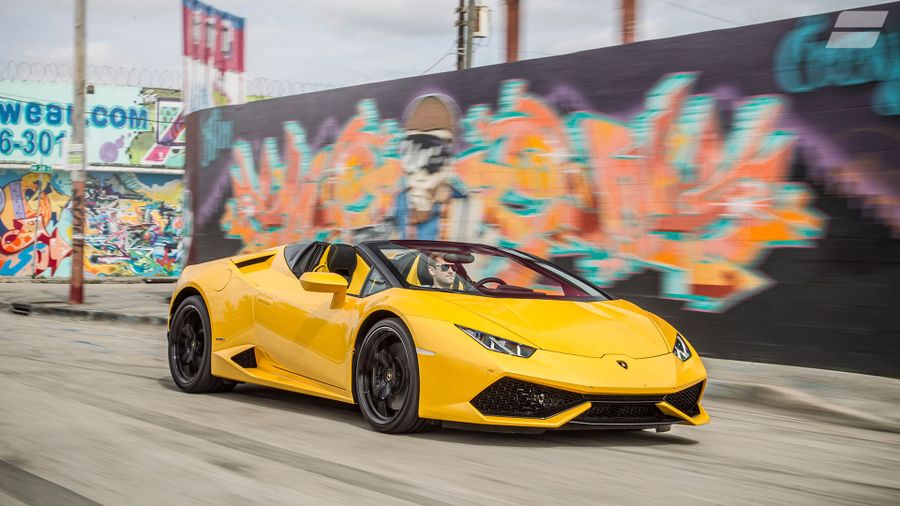