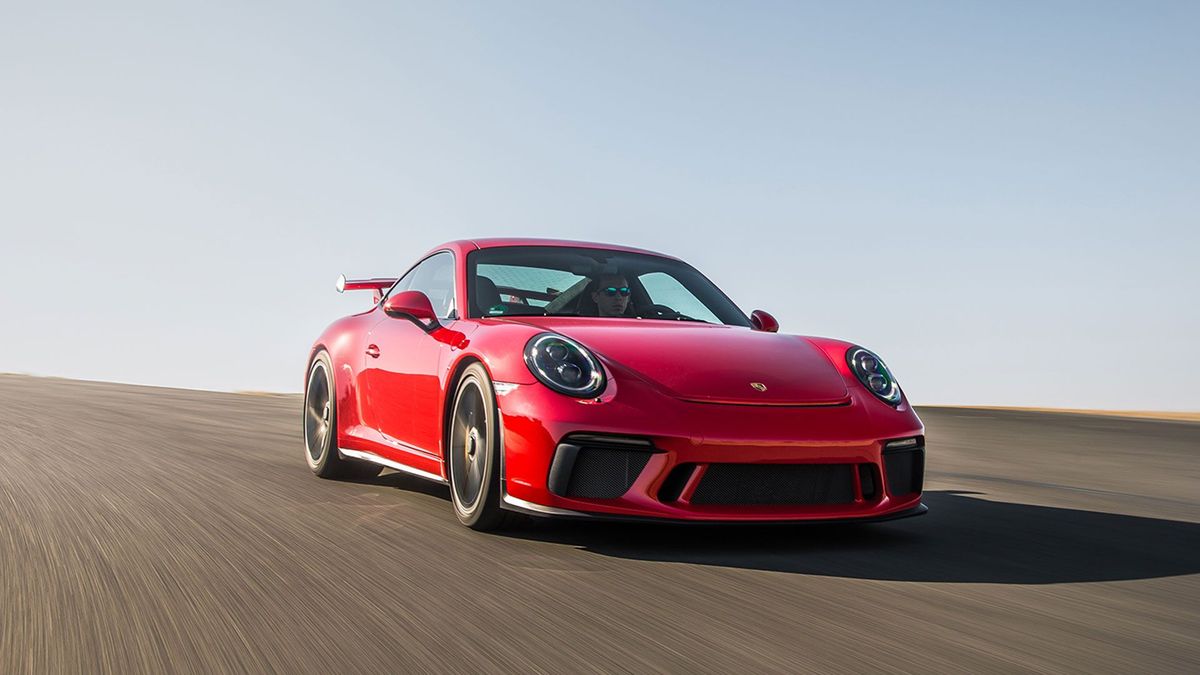 The GT3 dispenses with some of the comforts of the standard 911 range to eke out even more performance and involvement for the driver. It’s savagely fast, but thoroughly engaging even at road-legal speeds, and very hard to find fault with. 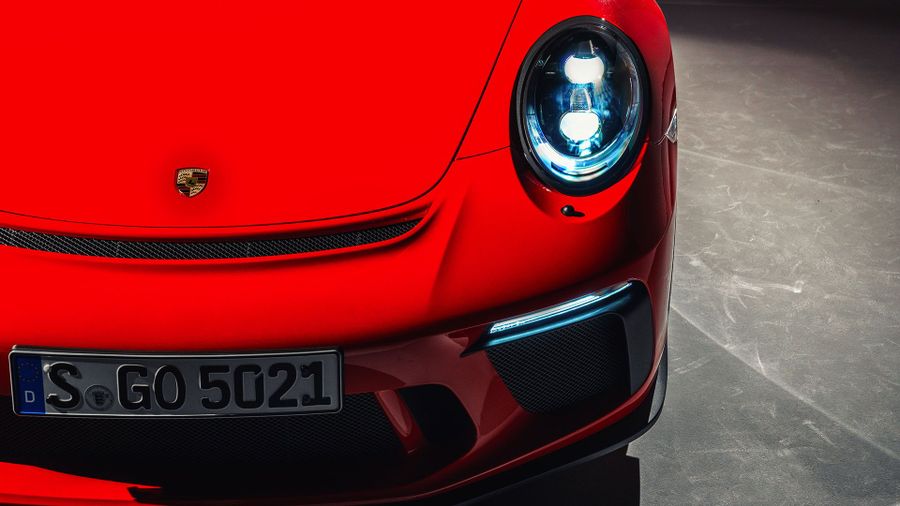 The 911 shape has barely evolved over the years, being recognisably similar to the original car of the 1960s. The GT3 takes the latest lines of the standard 911 Carrera and adds plenty of aggressive bodywork in the name of aerodynamic performance; most notably the huge carbon fibre rear wing and large air intakes to the rear-mounted engine. The suspension is 25mm lower than the 911 Carrera S, giving a more squat, purposeful look, and the GT3 is also wider by 44mm. It rides on 20-inch lightweight alloy wheels; in fact, lightweight is the name of the game with much of the bodywork made from carbon fibre or polyurethane. Standard colours are black, white, Guards Red or Racing Yellow, with seven metallic colours available as an option. For substantially more, there are also four ‘Special Colours’: Carmine Red, Crayon, Lava Orange and Miami Blue. 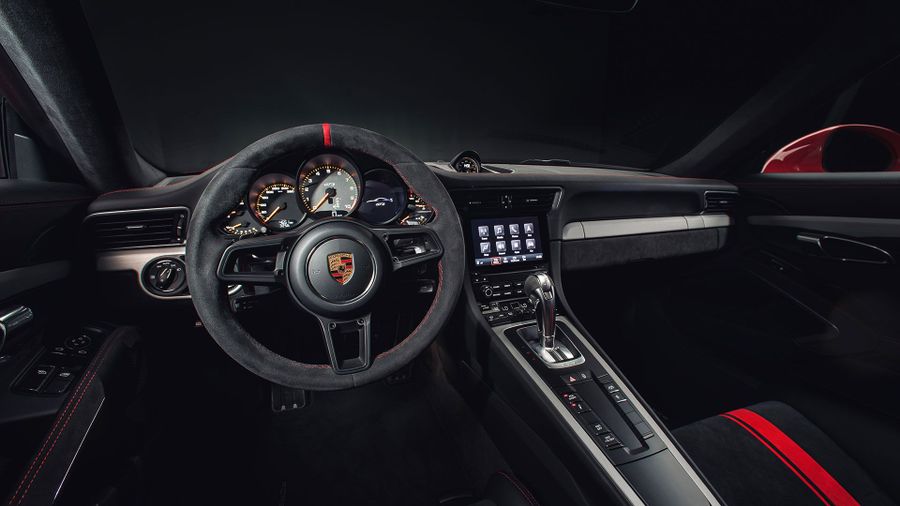 As standard, the GT3 comes with four-way electrically adjustable sports seats, but there are three other optional types of seats that trade various levels of luxury comfort for extra support and a lighter weight. Build quality, as we’ve come to expect from Porsche, is excellent, with a mix of leather and Alcantara (faux-suede) covering seats and dashboard. The seats are sunk into the floor for maximum feel from the car, and the steering column extends to get the perfect driving position. 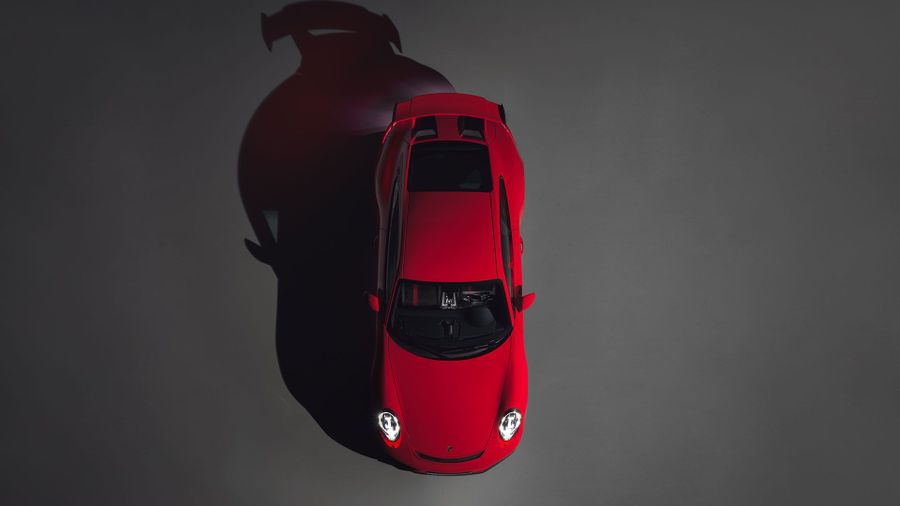 The GT3 is all about performance, so some of the already-limited practicality of the standard 911 has been ditched to gain extra poke. Chiefly, the rear seats are no more, meaning the GT3 is a strict two-seater. And the rear-mounted engine means the boot is under the bonnet. It’ll take a couple of soft weekend bags, but forget anything bigger. Inside, a couple of flimsy cupholders fold out of the dashboard, and there’s a small storage space under the centre armrest, but that’s about your lot. 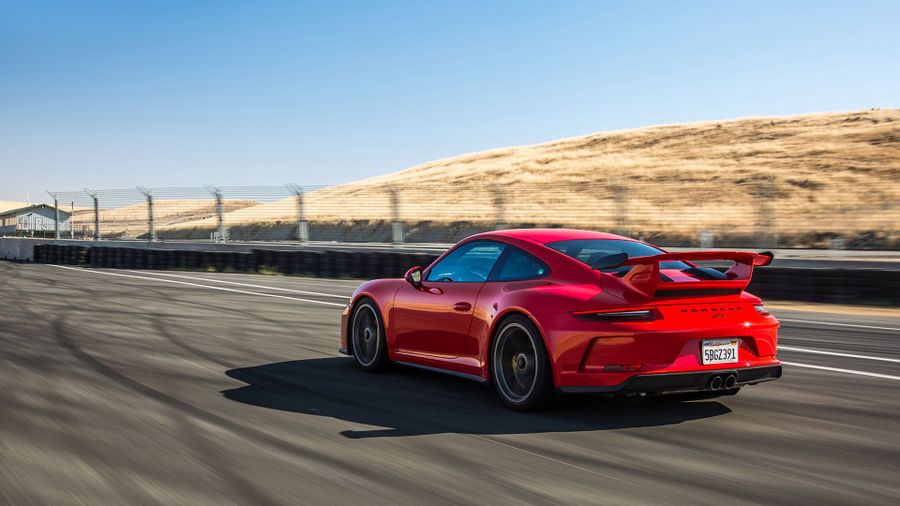 With the standard 911 already one of the best handling sports cars on the market, it’s hard to imagine how Porsche could mess the GT3 version up. And they haven’t, it’s superb. Feedback to the driver through the steering and chassis is top-notch, and without wanting to get too zen about it, there’s a feeling of one-ness with the car that’s almost unparalleled. There’s a lot of clever technology in the GT3, from dynamic engine mounts to rear-axle steering, but it’s remarkably mechanical in the way it feels, which leads to a sense of involvement that is rare to find in modern cars. The ride is firm, as you’d expect in such a sporty car, but it’s not spine shattering; there’s enough compliance to stop you bouncing around on less-than-smooth roads, even with the suspension set to its hardest in Sport+ mode. 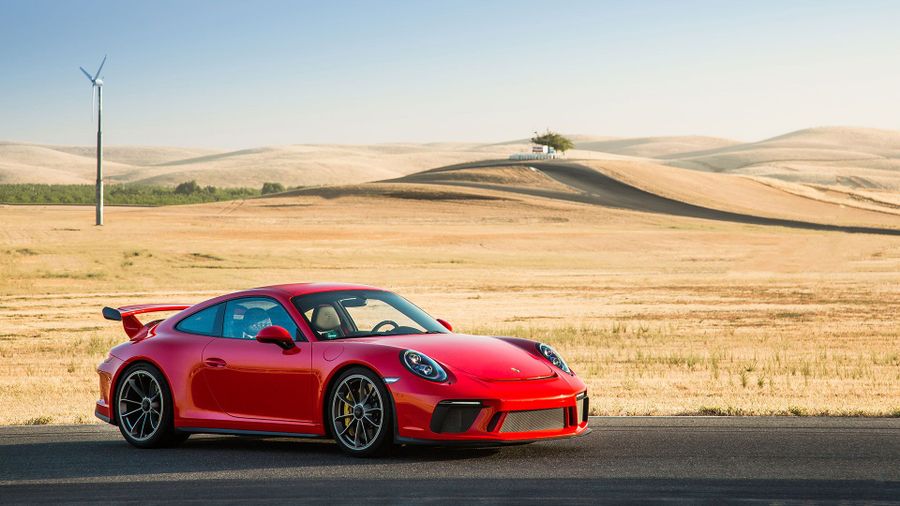 The GT3 ignores the increasing trend to turbocharge engines, and sticks with natural aspiration in its 4.0-litre, flat six. Derived from the engine used in Porsche 911 GT3 Cup racing cars, it develops 500PS, which is 25PS up on the previous generation of GT3, and makes for instant, savage but entirely controllable acceleration. Although torque is sufficient for decent progress at lower engine speeds, the GT3 thrives on being worked hard, with a red line at 9000rpm. The only real downside is that you’ll be annihilating road speed limits by the time you’re in third gear, so the only chance to get the most out of the engine is on the track. Thankfully, it’s still fantastic fun to stay within the usable window on the road. Porsche supplies the GT3 with an automatic PDK gearbox as standard, which we’ve yet to try, but have a high opinion of from other 911 models. Crucially for driving enthusiasts, it’s also available with a six-speed manual transmission, which is excellent. 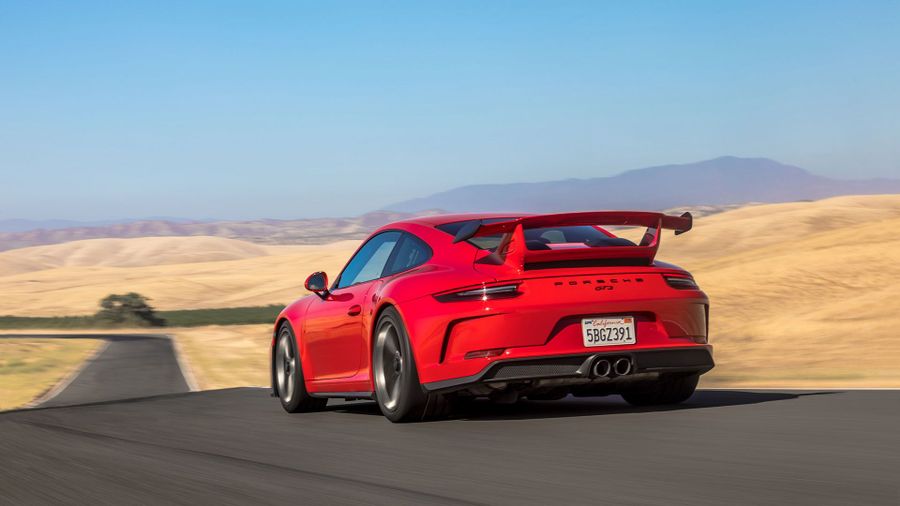 The 911 GT3 is almost identical in purchase price to the Mercedes-Benz AMG GT, but will cost more to run, due to the Merc’s superior resale value and fuel economy, despite having extra power. The GT also benefits from much cheaper servicing and repairs than Porsche too. Jaguar’s top-end F-Type, the SVR, is also a similar purchase price, but overall running costs are much higher compared to the Porsche’s due to poor resale value. Other rivals could include the Nissan GT-R, which is much cheaper to buy and overall cheaper to run, but doesn’t have the prestige badge of the Porsche. 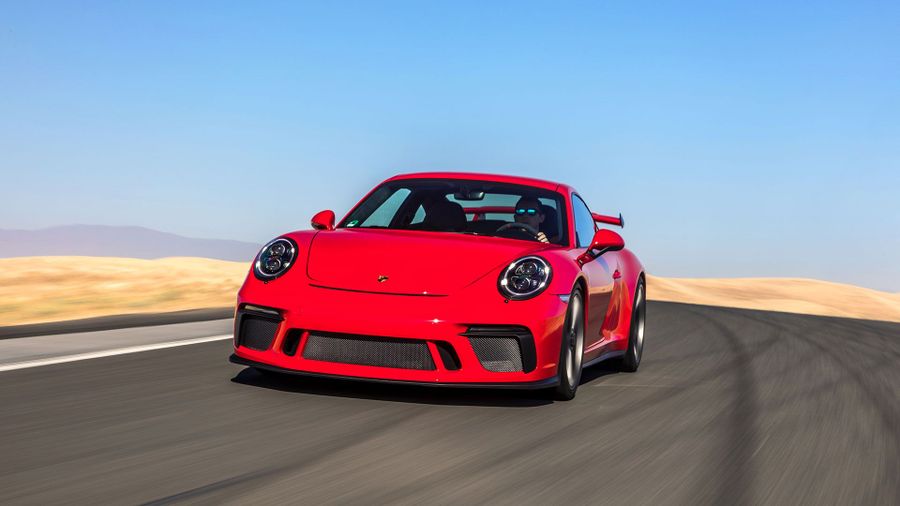 Porsche as a brand, unfortunately, doesn’t have a particularly great reputation for reliability, sitting near the bottom of the overall manufacturers’ rankings in Warranty Direct’s Reliability Index. We don’t have any data specifically on the latest generation of 911, let alone the GT3 version, but the feedback on the previous 997 generation was similarly bad. Having said that, owner reviews for the 911 on Auto Trader have generally been positive. 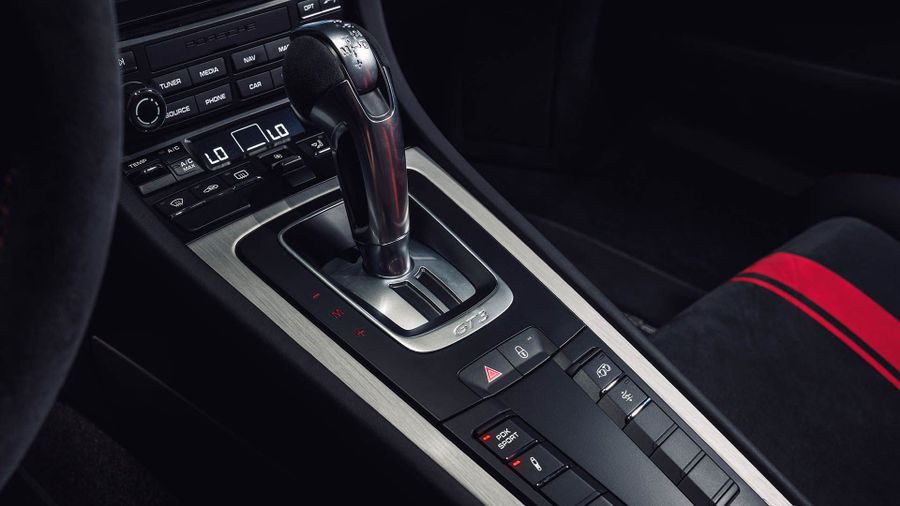 The 911 GT3 comes with six airbags as standard, but lacks any of the active safety equipment found on more everyday cars, such as automatic emergency braking. Safety cost options include a passenger seat Isofix child seat mounting point and a fire extinguisher, while the Club Sport Package outfits the car with track kit like a roll cage and six-point harness, but it’ll cost you north of £2,500. You can also upgrade the brakes to super-durable carbon-ceramic discs if you’re really going to be working the car hard. The 911 hasn’t been crash tested by safety organisation Euro NCAP, as it’s a relatively niche car. 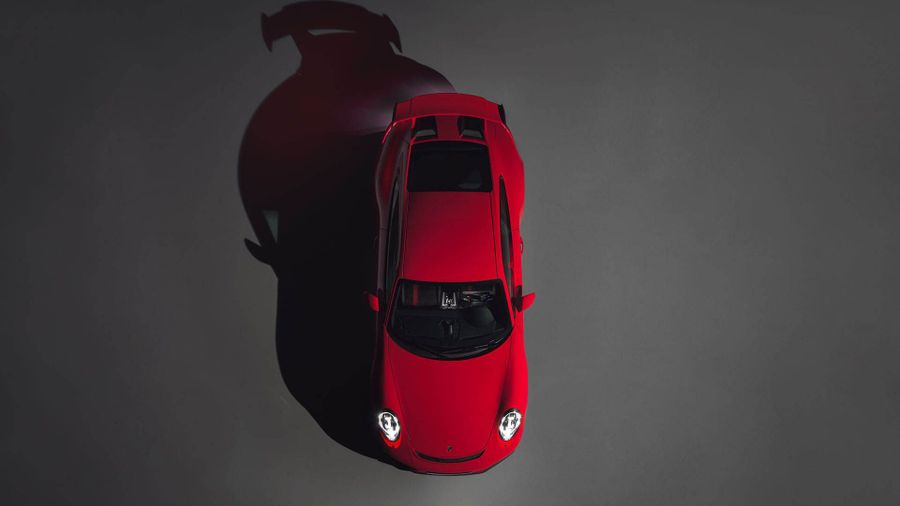 Much of the technological kit required to make the car drive better – and let’s face it, that’s the main aim of the GT3 – is included as standard. The options list does feature some equipment that, on a car costing well over £100,000, we might have expected as standard, such as a reversing camera, cruise control and auto dimming rear mirror. You also have to pay extra for DAB radio, and can upgrade to a Bose stereo. Most drivers will want to opt for the front axle lift system, which is almost essential for around-town use. 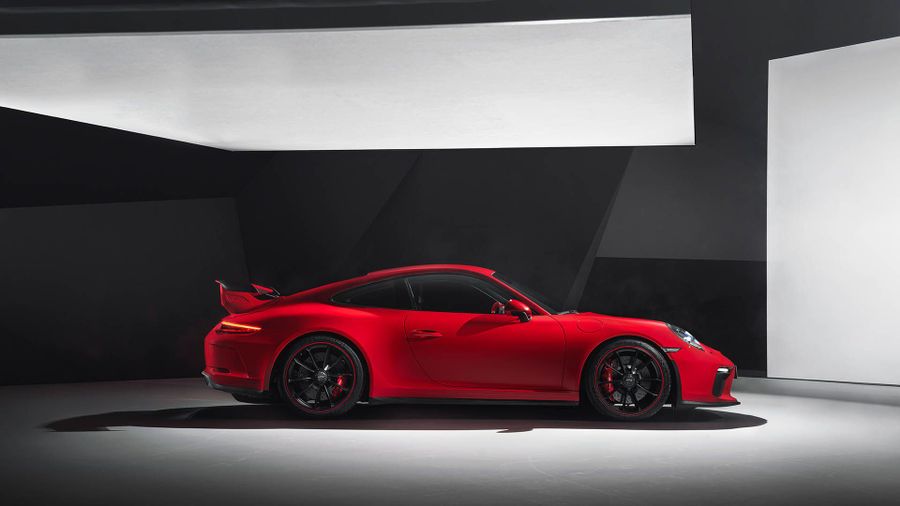 Because you want one of the purest, fastest and most capable sports cars available. The GT3 is the culmination of more than 50 years of 911 evolution and all of Porsche’s motorsport experience, distilled into a machine that will rip up a racetrack but also offers usable, enjoyable thrills on the road. 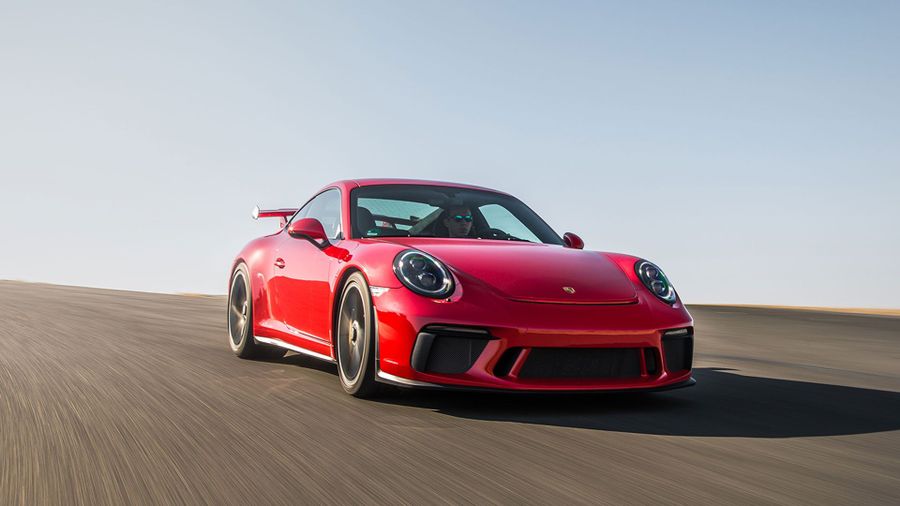