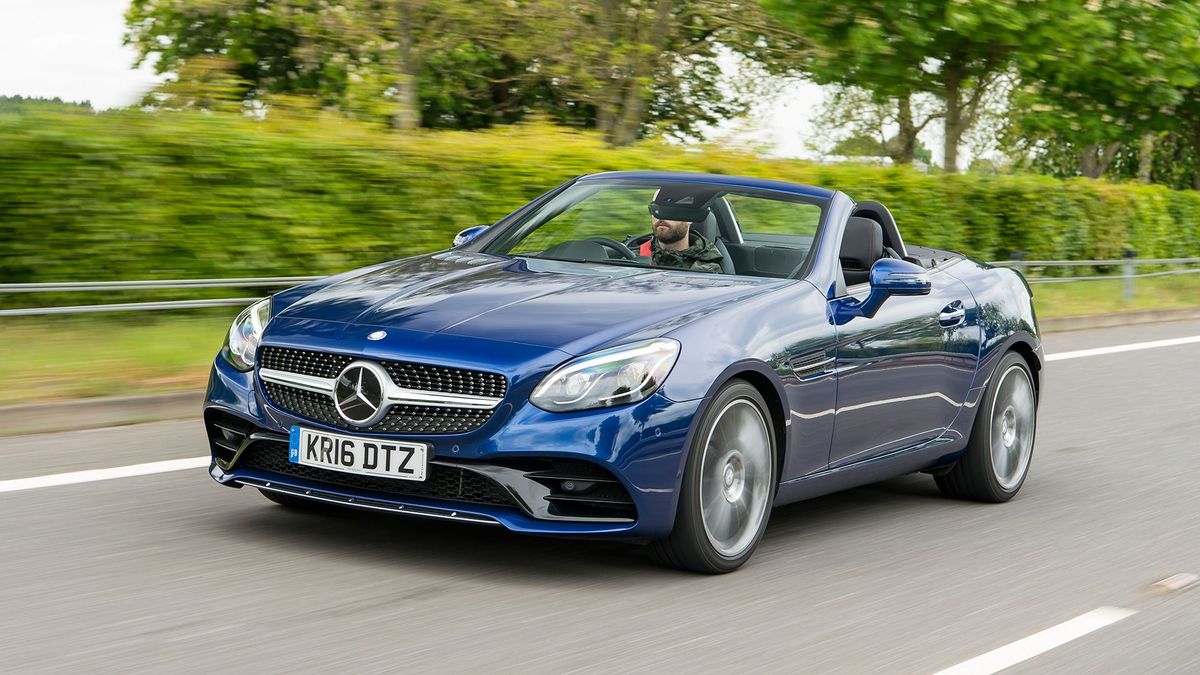 The Mercedes SLC seems pretty appealing in isolation, with smart looks inside and out, a strong image and some impressive economy figures. However, when you compare it with talented rivals like the Audi TT Roadster in these areas – plus pretty much every other one, for that matter – then the Merc’s weaknesses become more apparent.

Best on a budget
SLC 180 AMG Line
The cheapest SLC comes with most of the kit of more expensive models
Most economical
SLC 180 AMG Line
After the demise of the diesel version, the 180’s 48mpg is the best you can hope for
Blow the budget
SLC 43
We’ve yet to try the version with the 3.0-litre V6

The SLC cuts a very familiar shape, but in a variety of different ways. From the rear and the side, the car is virtually indistinguishable from the SLK that it replaced, which is hardly surprising given that the two cars are pretty much identical in all but name. At the front end, by contrast, the styling cues are more recognisable from the larger SL roadster than they are the SLK, with a similarly spangly grille design and rounded headlamps. The resemblance to its bigger, more luxurious brother does give the SLC a certain amount of extra glamour, but rival cars like the Audi TT Roadster aren’t exactly short of glamour, either. Most versions come only in racy AMG Line specification, which has alloy wheels, a beefy-looking body kit and headlamps with integrated LED daytime running lights, while the sportier SLC 43 version looks even meaner with a spoiler, twin exhausts, red-painted brake calipers and a shedload of extra badges. 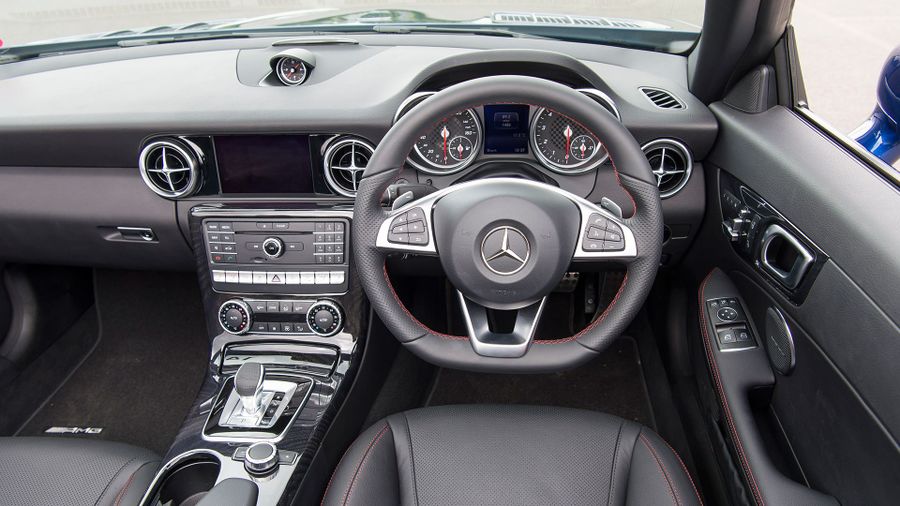 In isolation, the quality inside the SLC seems generally pretty high, with materials that feel similar in poshness to those found in an A-Class, CLA or one of Merc’s other small cars. However, compare it with the incredible plushness you get from an Audi TT’s cabin, and the SLC falls way behind. Sadly, it’s a similar story with the ergonomics: the centre console is festooned with a huge number of small, poorly marked buttons – many of which are completely pointless, given that most of the same functions can be accessed through on-screen menus selected by the wheel controller that’s placed right next to these buttons – and some of the other controls have the usual Mercedes quirks; wiper controls on the indicator stalks, anyone? The heavily offset pedals will limit how comfortable you’ll be, and with the roof up, your rear visibility isn’t that great.

This isn’t the reason you buy a two-seat roadster, but nevertheless you’ll want enough practicality to let you enjoy a weekend spent blatting around the countryside. The SLC’s cabin has enough space for two fully formed adults to sit in comfort, and there’s plenty of storage space for odds and ends dotted around the place. Storage space for luggage is rather more of a mixed bag, if you’ll pardon the pun: you have loads with the roof up - 335 litres, in fact – but with the roof down, you have to cram your bags underneath a fold-down load separator, which reduces the space to 225 litres, space that’s also extremely difficult to get to without raising the hood entirely. 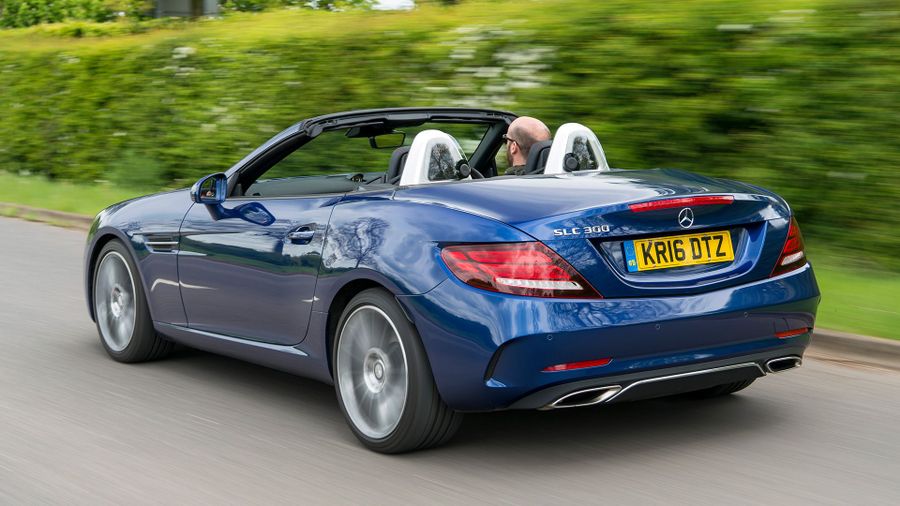 It may have a different name, but the SLC is barely any different to the old SLK underneath, and that means it feels like distinctly old technology. The biggest problem is the ride comfort, or rather, the shortage of it. The car jitters and fidgets over small bumps, then thuds and thumps over bigger ones. Adaptive dampers are available that vary the behaviour of the suspension according to which of the three driving modes (Comfort, Sport, Sport+) is selected, but even these can’t remedy the problems. All this is exacerbated by the fact that the body shakes and flexes more than it should, and as soon as you hit a less-than-perfect surface, squeaks and rattles start intruding from all over the place. The handling is decent, with strong grip and reasonable body control, but the SLC is nowhere near as poised or as playful as rivals like the Audi TT Roadster.

So far, we’ve only driven the SLC in its entry-level form - called the SLC180 - which has a turbocharged 1.6-litre petrol delivering 156 horsepower. Obviously, you’d never expect this version to be a snorting, fire-spitting monster of a thing, but even so, the performance is even more modest than you expect. It’s flexible enough to enable easy around-town pootling, but if you’re looking for any sort of sparkle to your acceleration, you’ll need one of the more powerful versions. These come in the form of the SLC 200 and SLC 300, both of which have turbocharged 2.0-litre petrol engines with 184 and 245 horsepower, respectively. The range-topping car – the SLC 43 – have a twin-turbo 3.0-litre V6 petrol punting out 367 horsepower. The 180 and 200 versions both come with a six-speed manual gearbox as standard, but it’s rather notchy and imprecise in the way it shifts. You can add a nine-speed automatic gearbox as an option (which we’ve yet to try), and you get it as standard on the 300 and 43 models. 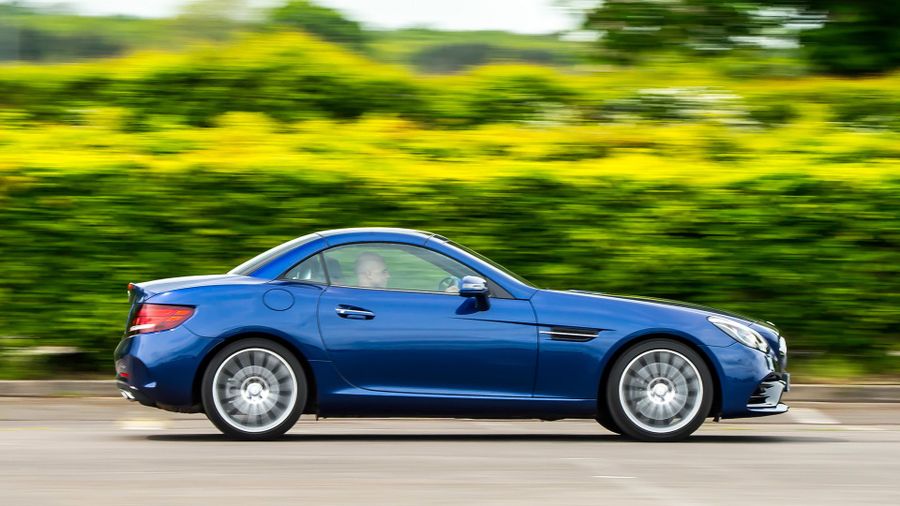 Prices for most versions of the SLC are pretty much spot-on with those of its biggest rival, the Audi TT Roadster; but, strangely, a couple of versions make the Merc look very expensive in comparison, so choose carefully. The sleek looks and desirable badge should mean the SLC holds its value pretty well as it ages, meaning more palatable whole-life costs, but the Audi will probably do better on that score. Compare the various petrol models, and the SLC is nip-and-tuck with the TT for fuel economy and CO2 emissions. However, Mercedes no longer offers a diesel-powered SLC, and the diesel-powered TT is by far the cleanest TT there is.

Mercedes has had a rather mixed reputation for reliability over the years, and things still aren’t as good as they should be, according to Warranty Direct’s Reliability Index. The company features pretty low down in the study’s manufacturer rankings – alarmingly low, some would say – and, although reliability data for the SLC itself isn’t yet available, the SLK hasn’t exactly proved to be one of the firm’s hardier models. That said, the owner reviews on our own website paint a much rosier picture about the SLK’s reliability, and like all Mercedes models, the SLC comes with a fair-to-middling three-year/unlimited-mileage warranty.

The SLC comes with all the safety kit you might expect from a prestige roadster, including six airbags, stability control and a high-performance braking system. It also comes with one or two bits you might not necessarily expect, such as autonomous braking, a pedestrian-friendly pop-up bonnet and a system that warns you if you’re getting tired. Several other clever systems, like blind-spot monitors and lane-keep assistants, are also available by way of various option packages. The SLC hasn’t yet been crash tested by Euro NCAP, and the SLK hasn’t been tested since 2002, either. 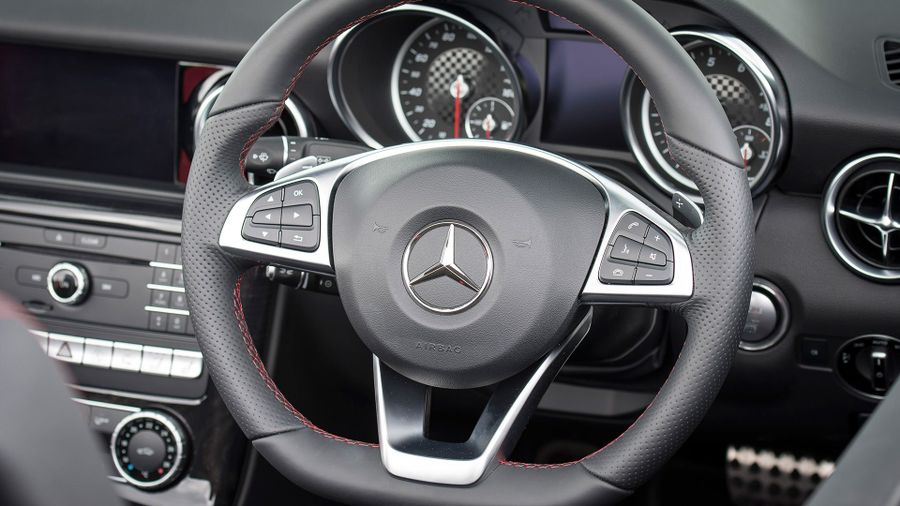 The mainstream SLCs all come in AMG Line trim, which gets you air-conditioning, electric windows, DAB radio, cruise control, Bluetooth and a fabric wind deflector. The SLC 43 version gets extra mechanical bits to handle the extra power, along with neck-level heating, reversing sensors, heated seats and sat-nav. However, you could argue that those last three items should be standard-fit throughout the range, rather than being left on the options list.

Because you’re attracted by the image of the three-pointed star, and by the sleek good looks of the SLC. However, if you’re not absolutely sold on either of those things, we’d suggest you also give the Audi TT Roadster a look. It has all the SLC’s prestige and beauty, but adds a nicer interior and better driving experience on top. 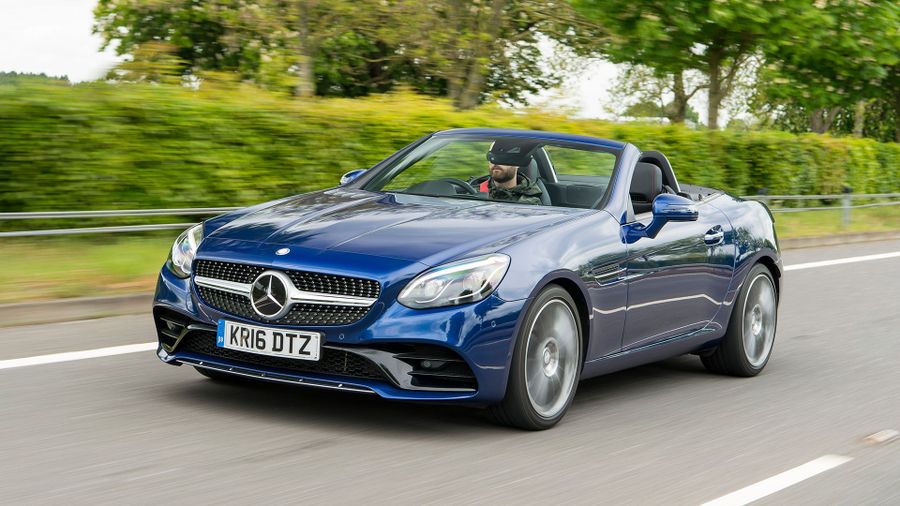