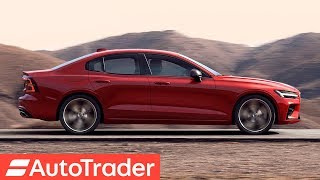 The Volvo S60 looks fantastic inside and out and every model is powerful and well equipped. It’s exceptionally safe and comfortable, too. It’s a worthy rival for the Audi A4, BMW 3 Series and Mercedes-Benz C-Class, but although the hybrid models have very low emissions the S60 is rather costly to buy and run.
Our verdict

Running costsSafetyFeaturesReliabilityInteriorPerformance
The S60 is only available in high-spec trim levels so it’s not cheap to buy. Once you’ve factored in the amount of equipment and power you get, prices are similar to those of comparable Audi A4 and BMW 3 Series models, however, and because the S60 is expected to hold its value well in the long run there are some very competitive lease and finance deals around.

Unlike most rivals, the S60 isn’t available with a diesel engine. Instead, there are powerful turbocharged petrol engines that are thirsty in isolation, but competitive with rivals for fuel economy and CO2 emissions.

You can also choose from two plug-in hybrid models. These combine a petrol engine with an electric motor and are able to use electric-only power for short trips, which could save some users money on fuel. Official fuel consumption and CO2 emissions for these versions are incredibly low, but these benefits have to be weighed against high list prices.

With 29 new and 314 used Volvo S60 cars available on Auto Trader, we have the largest range of cars for sale across the UK.