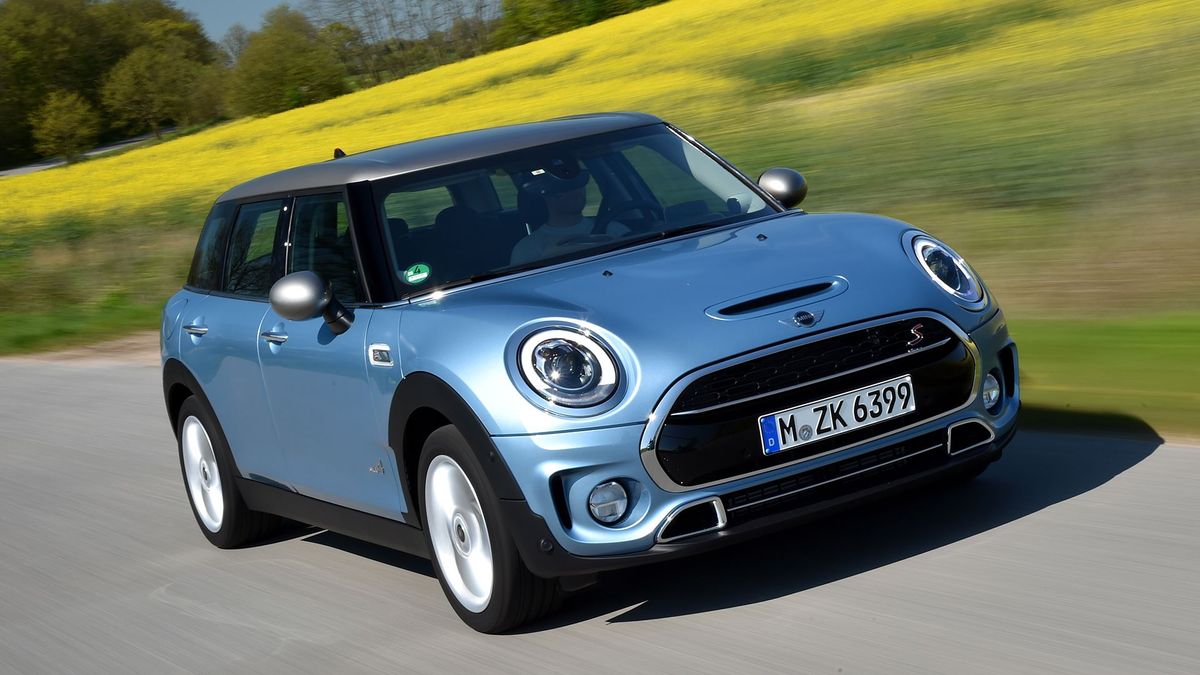 First published: 16th May 2016
Share on Facebook on Twitter
Auto Trader verdict:
Generally speaking, the Clubman’s ability to deliver a fun driving character, intriguing styling delights and a quirky take on everyday practicality make it an alluring proposition. So it’s all the more baffling how Mini has managed to get into such a pickle with the ALL4 automatic.

Some poorly resolved engineering has reduced the Mini’s inherent driving engagement and produced exasperating levels of noise, vibration and harshness. If the ALL4 were a bargain-basement offering, we might excuse some of the rougher edges, but given the hefty price tag, we find it difficult to recommend over the cheaper, and in every way superior, front-wheel-drive cars.
Need to know:
What is it?
A couple of frosty winters of late have seen the demand for four-wheel-drive cars rocket, with everyone and his wife jumping on the bandwagon. (How smug must Audi’s Quattro team be feeling at the moment?)

Mini is the latest manufacturer looking to get in on the act with its Clubman ALL4.

Featuring an all-new lightweight four-wheel-drive system complemented by a potent 2.0-litre diesel engine – there’ll be a 2.0-litre petrol car along shortly, producing a wholesome 188bhp and linked to an intelligent eight-speed automatic gearbox – it’s the most sophisticated Mini to date.

Thankfully, unlike some manufacturers, who have latterly adopted four-wheel-drive systems for existing models, the Clubman’s rear suspension was conceived with four-wheel drive in mind, so cabin- and boot space remains the same as in the standard car. Just as well really, because – despite the six-door layout – the Clubman is not exactly cavernous inside.

As with most Minis, the ALL4 is ‘reasonably’ well specced, with gearshift paddles and a launch control system, as well as alloy wheels, air-con, sat-nav, Bluetooth, ambient interior lighting, keyless ignition and sports seats.

If you want to up the ante, there are plenty of luxury and safety option packs available, including City Safe, which detects pedestrians and applies the brakes automatically if contact is imminent. There’s also the option of a full ABS-controlled emergency stop, which can be activated by pulling continuously on the parking brake lever. 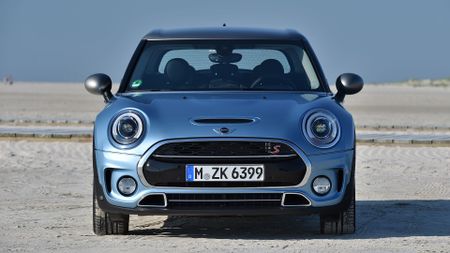 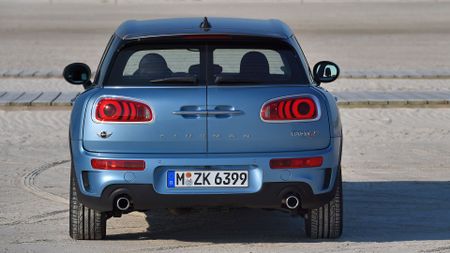 View gallery
What's it like?
It seems like only yesterday that we were driving a manual-gearbox version of the front wheel-drive Clubman D and raving about its wide breadth of talents. Consequently, it comes as a real shocker to discover that the higher-powered, four-wheel-drive version is so radically different to its humbler sibling – and not in a good way.

Obviously, the ALL4’s four-wheel-drive system and automatic gearbox add a few pounds to the equation, but countering the additional weight with extra grunt means the SD’s performance is pretty rapid. At 7.2secs, it’s actually almost 1.5secs quicker to 62mph than the lower-powered D.

In the process of squeezing extra grunt from the 2.0-litre engine some additional (compared to the lower-powered diesel) combustion commotion is produced, but at least the synthetically generated tones piped into cabin do a decent job of melding the additional hullabaloo into an sportyish thrum.

By the same token, the SD’s ride is equally well polished as the base car's, dealing with spiky surfaces in cultivated fashion and delivering a degree of vertical freedom that allows the Clubman to breathe and soak up surface imperfections in a plush, controlled manner.

The elephant in the room, however, is the SD’s eight-speed automatic gearbox, or to be more specific, the gearbox’s software calibration.

Although the shifts are generally smooth and there’s no shortage of technical trickery – linked to Google Maps, the cogs can be encouraged to swap up or down depending on the topography of your chosen route – but more often than not, the box looks to pull the highest gear possible in order to boost fuel economy.

That’s all very laudable – a claimed 58.9 mpg average economy is not to be sniffed at – but the trouble is, the ‘early’ shift strategy means the engine’s revs drop into an uncomfortable lugging zone with every shift, which creates a succession of distinct exhaust booms and no end of harsh vibration.

As a consequence, the vibes can be felt starting in the engine bay and cascading through the floor, steering column and the seat of your pants, before exiting stage rear via the four-wheel drive components' connection points.

At least, the four-wheel-drive system is relatively unobtrusive. Predominantly powering the front wheels during normal driving, it will shuffle up to 30% of the power to the rear axle to enhance traction, should you encounter slippery cornering conditions or tackle the road less travelled. Not that you’ll want to venture too far off the beaten track, as the ALL4’s ground clearance is identical to the standard Clubman's. 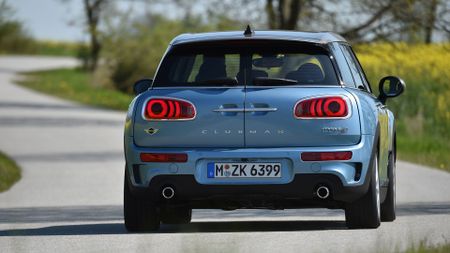 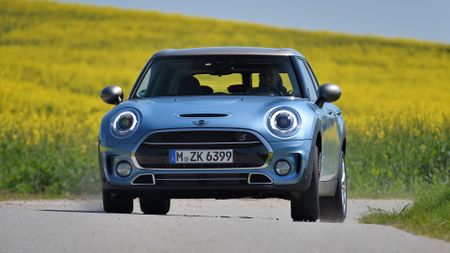 View gallery
Either our test car had a geometry problem, or the ALL4 has a unique steering tune. With a disconnected, open feel around the straight-ahead position, it often proved difficult to judge exactly just how much steering input was needed to tackle bends. Equally, at higher speeds on the motorway, the on-centre openness meant we all too often found ourselves juggling the wheel left and right to maintain a steady course.

In common with other Clubmans, the ALL4 generates a fair amount of wind noise at motorways speeds. It also sounds quite open to the elements, with a pronounced amount of roar from the stiff-walled run-flat tyres. Throw into the mix the supplementary mechanical whirr from the four-wheel-drive components and the ALL4 is not exactly the quietest of long-distance companions.

The ALL4 cabin features adequate, rather than abundant, accommodation for four, or five at a stretch. And, there is a decent amount of legroom even in the rear, although sitting on the paper-thin rear seats and enduring their scaffolding-plank firmness, you’ll be all too aware of the compromises Min has had to make to to maximise headroom.

While many manufacturers offer electrically powered tailgates, the Clubman features a split boot door, which employs a more Heath Robinson approach. Utilising a ‘stand well back’ strategy and some serious spring-loading, the rear doors shoot open when you tug at the handle or activate them via the key fob. Handy if you’ve got your hands full of babe and shopping, but not so great if your toddler wanders too close and cops a face-full.

Although the cabin materials are of decent quality and infinitely better than in Minis of yore, there remains a certain quirky eccentricity to the dash layout. With the exception of the perfectly logical infotainment system that uses a large rotary controller to run through the menus on the dartboard-sized circular central screen, the layout of the rest of the switches and auxiliary controls looks like they’ve been arranged via sawn-off scatter-gun.
Should I get one?
In a word: No.

Unfortunately, for all its claimed traction and automatic-gearbox convenience, the ALL4 is, by far, the clumsiest and most uncultured Clubman currently on sale. Given its substantial list price, we wouldn’t hesitate to flag it up as ‘one to be avoided’ and instead point you in the direction of the cheaper and infinitely superior Clubman Cooper D manual.
Key facts:
Also consider:
Audi Q3
Rivals the Mercedes GLA and Range Rover Evoque for the right to be called the most desirable small 4x4. It’s certainly one of the most efficient, and it’s also cracking to drive.

Mercedes GLA
Looks flash inside and out. It’s just a shame that the engines are so noisy, and you’ll need to be bit of a masochist to put up with the ride.

BMW X1
The BMW X1 offers the comfort and security of a bigger SUV, without the environmental concerns associated with such machinery... 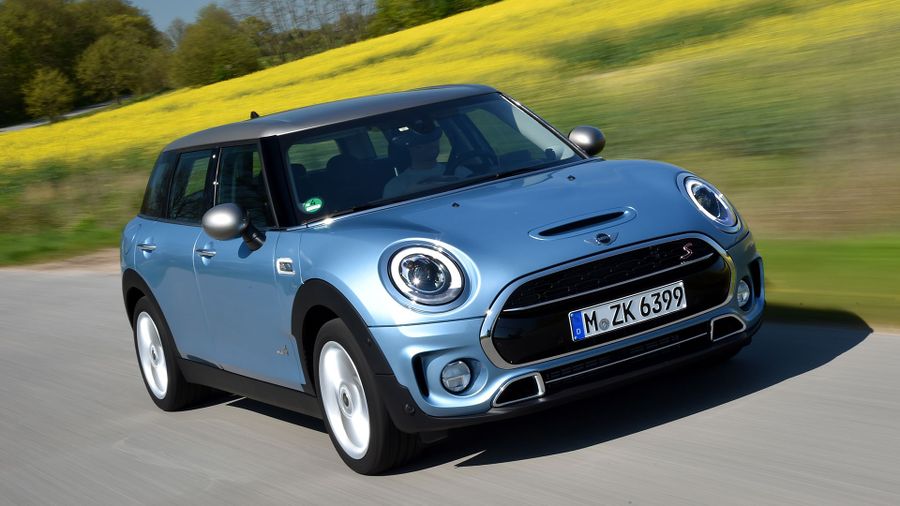