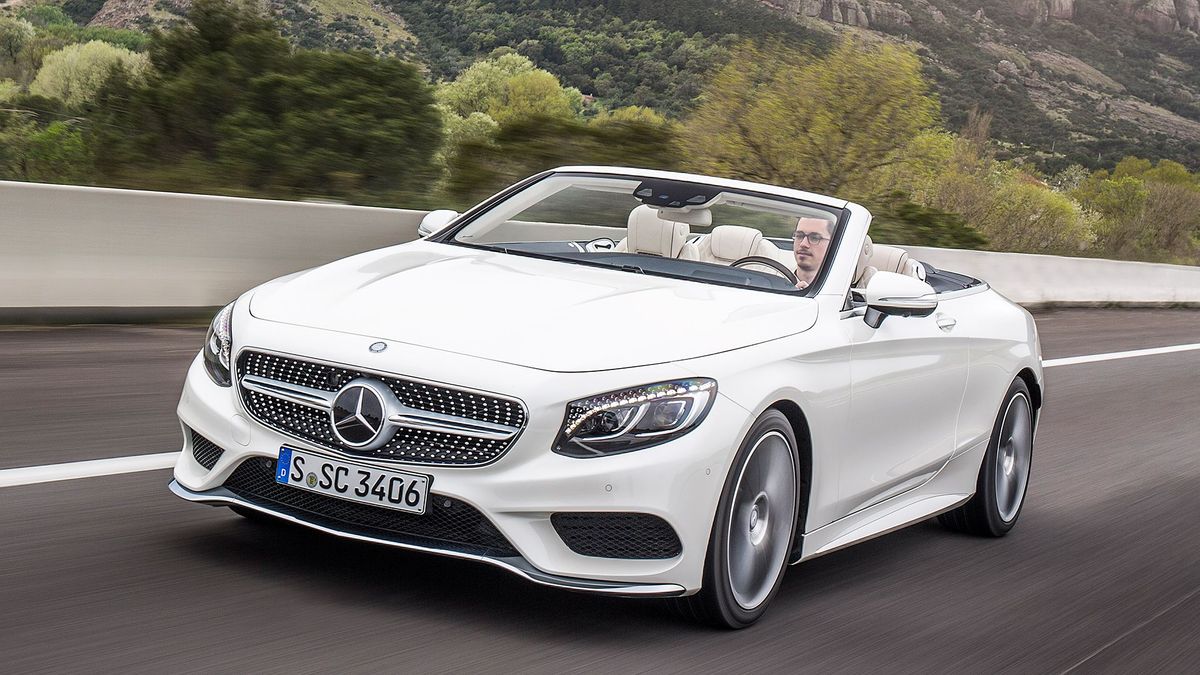 View gallery
First published: 11th April 2016
Share on Facebook on Twitter
Auto Trader verdict:
Given Mercedes already has the SL in its line-up and is likely to do a convertible version of the AMG GT supercar, the addition of the S-Class Cabriolet – a model last seen in 1971 – could be considered superfluous. However, this is a four-seat open-top in the grandest style, possessed of a sublime ride that is second-to-none, a range of ultra-refined and supremely powerful engines and fitted with a cabin that makes every other Mercedes interior look plain. Entry to the S-Class Cabriolet club is not cheap, but then unerring quality of this magnitude is rarely inexpensive.
Need to know:
What is it?
Mercedes’ first four-seat open-top car based on the company's flagship saloon since the early 1970s, the 2016 S-Class Cabriolet is essentially the same as the Coupé, but with a folding fabric top in place of the metal roof. That makes the convertible S-Class anything between £7,325 and £12,070 costlier than its equivalent hard-topped model, but for sheer posing power like this you have to pay such hefty premiums.

This comes with a 4.7-litre twin-turbocharged V8 engine that's enough for 0-62mph in 4.6 seconds, with economy rated at 32.5mpg and CO2 emissions of 204g/km. All S-Class Cabriolets have a three-layer soft-top, rather than the folding metal contrivances of the SLC and SL, as this better mimics the roofline of the Coupé, takes up less space in the boot when stowed, and is less complex and expensive to build. Four colours are offered for the fabric roof: dark red, blue, black and beige. 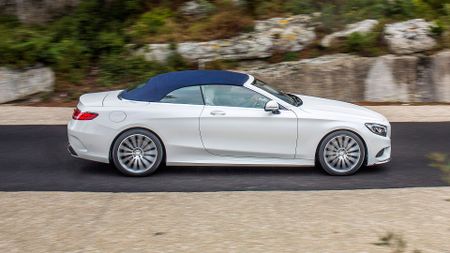 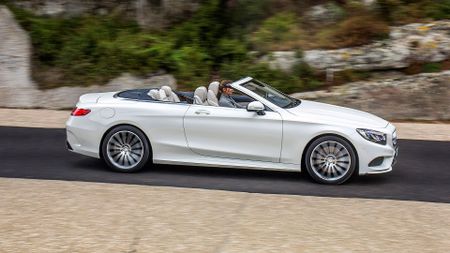 View gallery
What's it like?
At two tonnes-plus, and despite the presence of a pair of AMG bruisers in the line-up, the S-Class Cabriolet does not pretend to be a sporty car; instead, it leaves that sort of behaviour to the SL roadster. What we’re majoring on here is unalloyed luxury, and on that score the S500 is faultless.

Starting with the interior, our favourite features include that glorious dashboard, complete with two sharp-as-a-pin 12.3-inch TFT display screens; the arrays of buttons to the side of the instrument cluster, underneath the four central air vents and arrayed in a dish formation on the centre console ahead of the Comand controller; and that sweeping dash trim, which can be finished with horizontal lines reminiscent of decking on Riva motorboats, which we think is a marvellous bit of sculpture. It’s safe to say everything you can look at and touch will satisfy even the most demanding of clientele in terms of quality.

Despite being a physically large vehicle, the S-Class Cabriolet pulls off the neat trick of not appearing to be hulking. In fact, it looks lithe and limber, thanks to neat side detailing and the trademark current Mercedes coupé/cabriolet rear design, complete with slender light clusters and a number plate set down low. The S500 has slightly less aggressive front and rear bumpers than the AMG models, yet it still looks a million dollars from the kerb, hood up or down. With the roof folded away, the S500’s neat rear transom and swoopy tail once again bring an image of an upmarket speedboat to mind.

That feeling of being on a land yacht (in the nicest possible sense of the phrase) is continued by a ride that requires every superlative in the book just to describe it. Airmatic semi-active air suspension is standard-fit on all S-Class Cabriolets and it does a remarkable job of convincing its occupants that the car is floating, so negligible is the feedback transmitted through the chassis, seats and steering wheel. It even goes the other way and maintains excellent body control given there’s an 85kg weight penalty over the S-Class Coupé. That said, follow a hard-driven S500 Cabriolet and you’ll notice it leans more noticeably in bends than the AMG variants would. 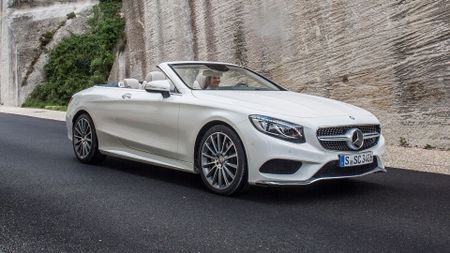 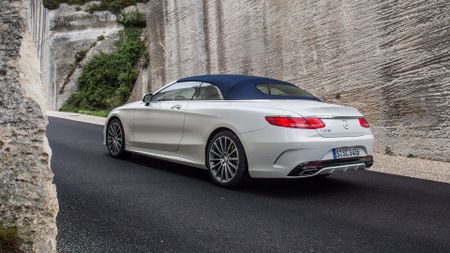 View gallery
The flawless ride is supplemented by other factors that all go to generating an enormous sense of well-being in the car’s passengers. Good aerodynamics mean the S500 cuts through the air with ease, further aiding refinement. It also means that, with the hood down, those sitting in the Mercedes are subjected to a modest amount of turbulence, all helped by the standard Airscarf neck-heating feature and Aircap, which pops up both a bar on the windscreen header rail and a wind diffuser behind the rear seats to prevent most airflow from entering the car. Masses of sound-deadening also contribute to the Mercedes’ inner peace – and its 2,115kg weight.

However, it is weight that the mighty biturbo V8 has no trouble shifting. With a gorgeous, cultured sound from the exhausts and rapier responses from the 9G-Tronic automatic transmission, this behemoth can really get a shift on when required. The gearing of the gearbox is strangely long so you’ll find the S500 can pull ludicrous velocity in fourth gear, when there are another five cogs still to come, but the engine is charismatic, mightily strong and free of turbo lag. You can hustle the Cabriolet along, yet it’s much more fun to simply make composed, rapid progress without troubling the upper reaches of the rev-counter.

One minor criticism is that, even though Mercedes is calling this a four-seat open-top, while the rear seats are some of the most capacious going in any convertible, their limited legroom means taller adults wouldn’t want to spend a significant amount of time in the back. Indeed, Mercedes doesn’t anticipate the rear seats being used that often by S-Class Cabrio owners, which rather begs the question: why not just buy a Mercedes SL instead? Apart from this insignificant dilemma, though, it’s an utterly dominant performance in all departments from the S500.
Should I get one?
Emphatically yes, provided you have the funds. The traditional image of grand tourers is one of evocative and aspirational cars that can go great distances with consummate ease. The reality might be that we all fly to our holiday destinations nowadays, instead of packing up the GT and heading for the south of France, but if you’re flush and want to do the journey in the utmost style, the S-Class Cabriolet is practically peerless. In S500 guise, we’d have it over its Coupé sibling because the ability to drop the top and enjoy the elements makes this wonderful Mercedes feel the most magical S-Class of the lot – and that’s an incredible accolade to bestow upon the Cabriolet. 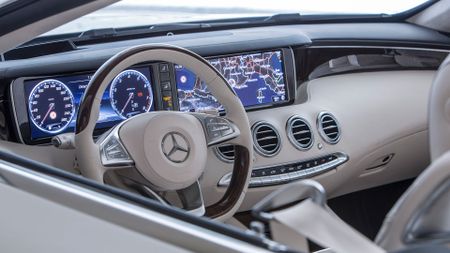 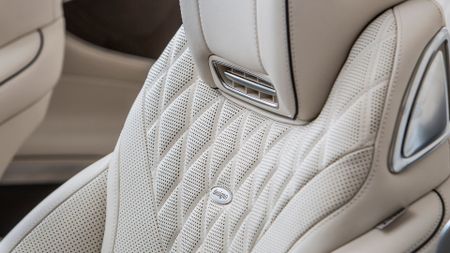 Mercedes-Benz SL
Strange to think one of the S-Class’ main rivals can be found in-house, but if you only need two seats then the SL is £19,510-£27,270 cheaper model-for-model

Rolls-Royce Dawn
Makes the S-Class Cabriolet almost look a bargain, given Dawn breaks at £265,000; Rolls-Royce has a particular cachet that other manufacturers struggle to match, though 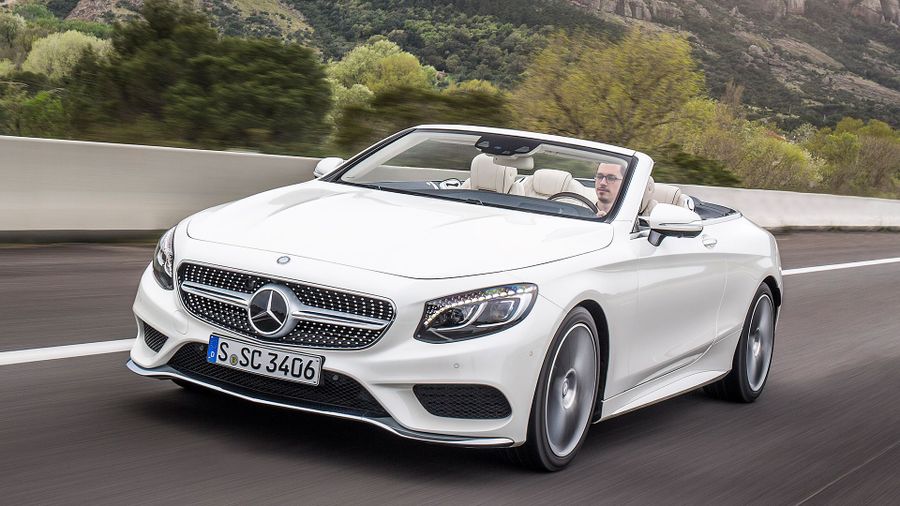