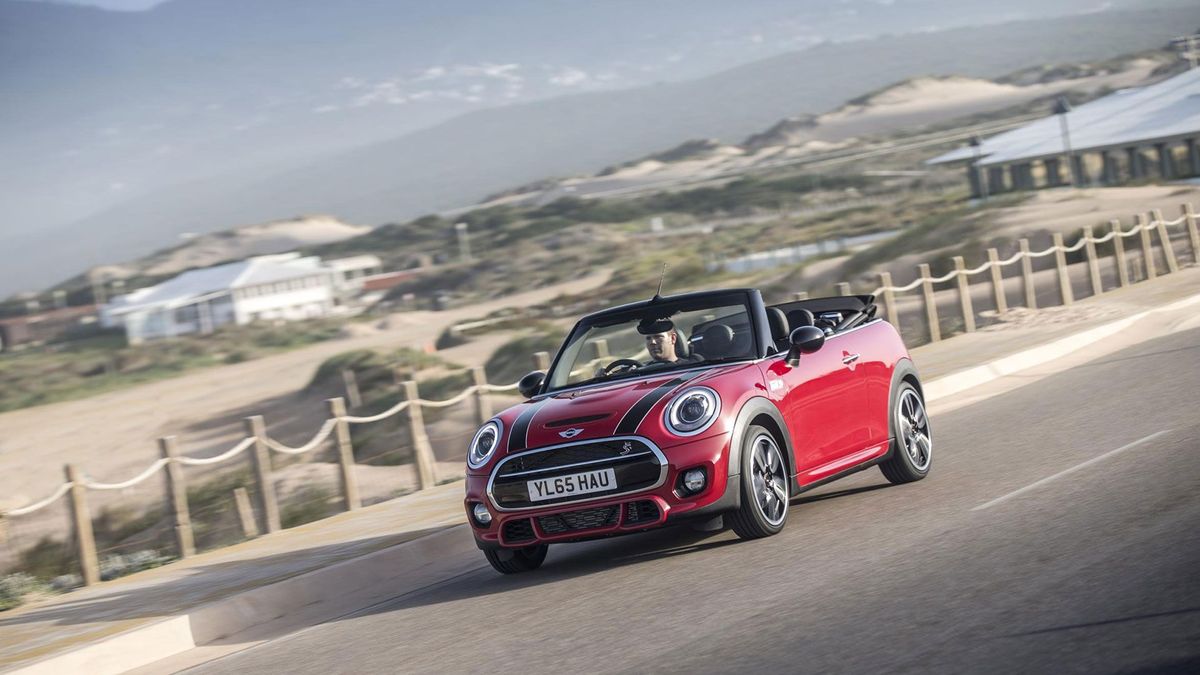 View gallery
First published: 29th February 2016
Share on Facebook on Twitter
Auto Trader Verdict:
The previous Mini Convertible was the best-selling open-top car in the UK and this new one has improved on its winning formula in almost every respect. It drives better, it looks better, and thanks to the all-new underpinnings, it now has enough space on board that you could even call it practical, too. It’s still expensive, but considerably more polished than any of its rivals.
Need to know:
What is it?
The open-air version of the second generation of the modern Mini. The success of the Mini brand (in the BMW-owned era) rests primarily on the shoulders of the three-door hatchback, and some of the spin-off models have been more of a hit than others (Paceman JCW, anyone?).

However, the Convertible fits perfectly with most Mini buyers, bringing an added dollop of glamour to the tried and tested recipe of chic retro styling and go-kart handling. Except, of course, the previous model - whisper it - wasn’t actually that good to drive, with some real flex in the chassis, added weight, a cramped interior and so-so interior plastics and fit and finish.

This new version aims to rectify all those problems in one fell swoop, though. Based on the latest chassis platform, it’s considerably bigger than before, and this larger footprint translates directly into more space for those in the cabin. The boot is bigger, too, apparently by nearly a quarter, and the folding cloth roof has been redesigned, although it’s still plonked above the boot when you fold it down.

To find out if the driving experience has also improved, we’re testing the sportier Cooper S, which has a new 2.0-litre turbocharged petrol engine that makes a healthy 189bhp at 5,000rpm. As with the rest of the range, though, there is a pair of three-cylinder models, too: the Cooper has a petrol engine with a more modest 134bhp, and finally there's a frugal 1.5-litre diesel unit in the Cooper D. 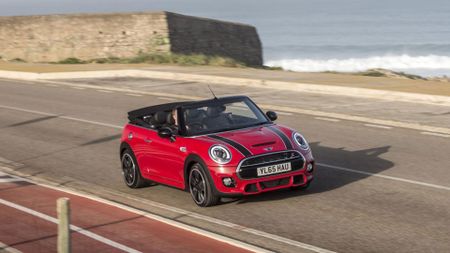 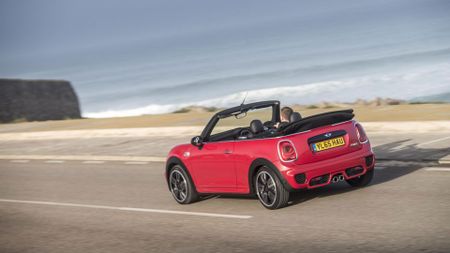 View gallery
What's it like?
Quite a looker. The five-door Mini and new Clubman both seem a bit too, well, swollen to wear a Mini badge without a slight hint of irony, but the latest Convertible looks very sharp indeed. The increase in size over the previous model means better proportions, with the extra width adding a sportier edge.

The Cooper S comes on 17-inch wheels as standard, the windscreen is swept further back so the car seems lower to the ground, and it also gets the customary (cosmetic) bonnet vent, too. The grille, air intakes, fog lights and headlamps all seem to fight for your attention in the limited real estate available up front, but this does leave the sides completely clean for a sleek profile.

Find yourself a sunny spot, open up the new folding roof automatically using the key fob (a process which now takes around 18 seconds) and nestle yourself behind the wheel, and you find a high-quality interior that perfectly matches the new-found maturity of the design.
Apart from the obvious increase in shoulder- and elbow room for those up front, the cabin materials all feel considerably plusher than before; the switchgear is more substantial; and, even the cutesy retro throwbacks have been toned down (you still get a row of metal toggle switches and a big circular speedo though – don’t fret). The Cooper S is packed with sporty extras, too, including alloy pedals, a chunkier steering wheel and ‘S’ badges galore.

Practicality was never a strong suit for the Mini Convertible, but the company has taken strides to make this drop-top at least a bit more of a useful everyday proposition. Yes, the rear seats are still pretty tight for adults, but kids will now be comfortable on longer trips. And, the boot has grown by 40 litres to a 215-litre capacity with the roof-up, or 160 with it folded down.

The back seats split and fold as standard, and the boot hatch itself doubles as a sturdy bench if you fancy taking a break from driving for an impromptu roadside picnic. There is also a clever double hinge on either side to increase the size of the boot opening, so that you can squeeze a small suitcase in without feeling like you’re trying to shove it through a letterbox. 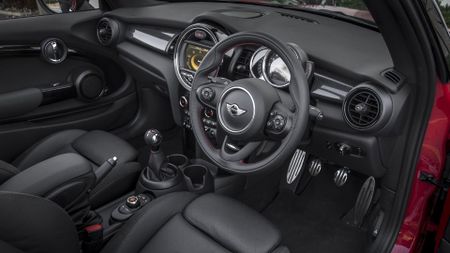 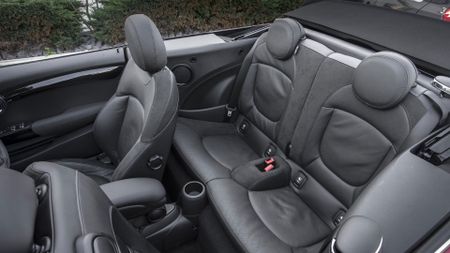 View gallery
So far, so great then, but what about the drivie? Happily, we can report that the dynamic experience has not been neglected just because the rest of the car has matured. It still feels very much like a Mini, with darty (occasionally hyperactive) quick steering, loads of cornering grip, and an impressive level of body control considering the lack of a solid roof.

The Cooper S we tried was fitted with both the optional sports suspension and adaptive dampers – with three different driving modes to switch between. Around town, where you’re contending with cobbles, speed bumps and so on, the ride is still a touch busy, but it jiggles you around considerably less than its predecessor ever did. On smoother, faster stretches of Tarmac, it's balanced and agile, but supple enough to make longer journeys much less tiring.

Zinging the new 2.0-litre engine round to the top of the rev range is just as exciting as it was before, but despite only a modest increase in power, it feels burlier in the mid-range. Drop a few gears in the positive six-speed manual gearbox and the in-gear punch is enough to make overtaking slower traffic a breeze, although at higher speeds, wind buffeting becomes an issue.

The stiffer body should also mean less squeaks and rattles from the vastly improved interior over the life of the car, and again, even on the worst surfaces, it’s hard to detect too much flex in the body, which bodes well for the hotter John Cooper Works version, which is due to arrive in April. 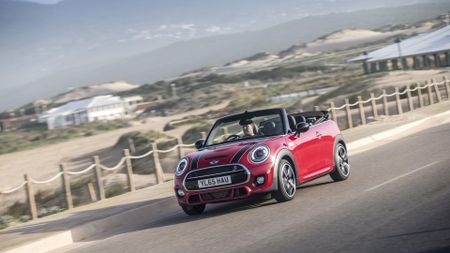 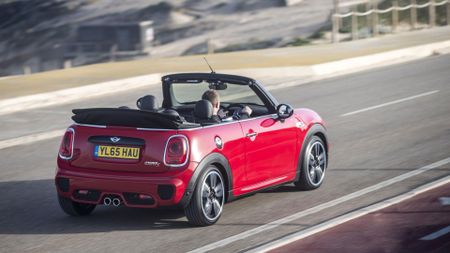 View gallery
Should I get one?
The latest Mini Convertible demands far fewer practical or dynamic sacrifices than its popular predecessor ever did, so if you’re sold on the looks and the brand, this will be welcome news. There also isn’t much competition – barring the recently revised Citroen DS3 Cabrio, which is getting quite long in the tooth mechanically, and two-seat options like the Mazda MX-5 and Fiat 124.

Even the top-spec Cooper S should be relatively affordable to run, too, with forties mpg easily achievable as long as you’re not attacking every corner, a relatively low 139g/km of CO2 emissions, and fixed-price servicing. The pricing is still premium, though, so picking a few too many of the options will transform this likeable £22,430 convertible into something seriously expensive.

Equipment levels are reasonable, and while rear visibility (roof down or up) is still pretty poor for such a small car, the Mini compensates with rear parking sensors and a reversing camera fitted as standard on every single model in the line-up. The Chili pack remains an essential addition, though, and heated seats, LED headlights and a multifunction steering wheel are all extra.
Key facts:
Also consider:
Mazda MX-5
Just two seats, but a little more ‘old school’ and fun to drive

Audi A3 Cabriolet
Bigger and more expensive, but with room for four adults – just 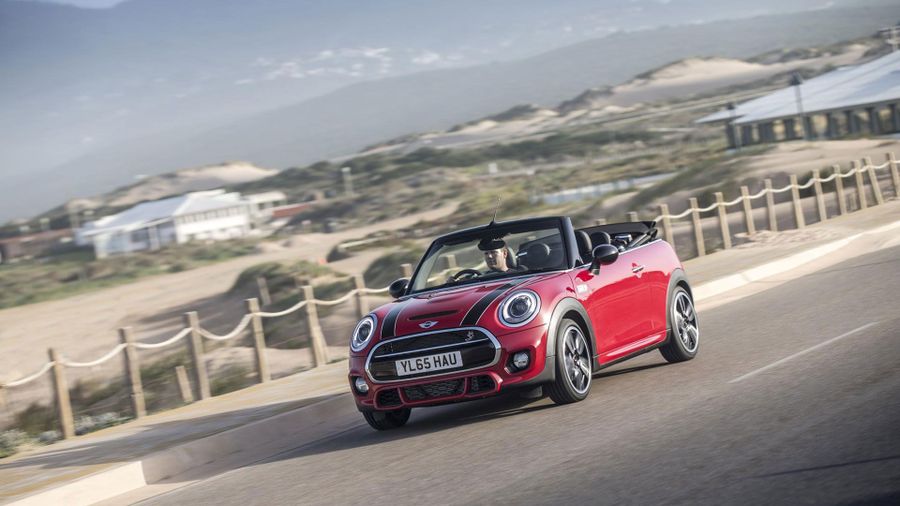