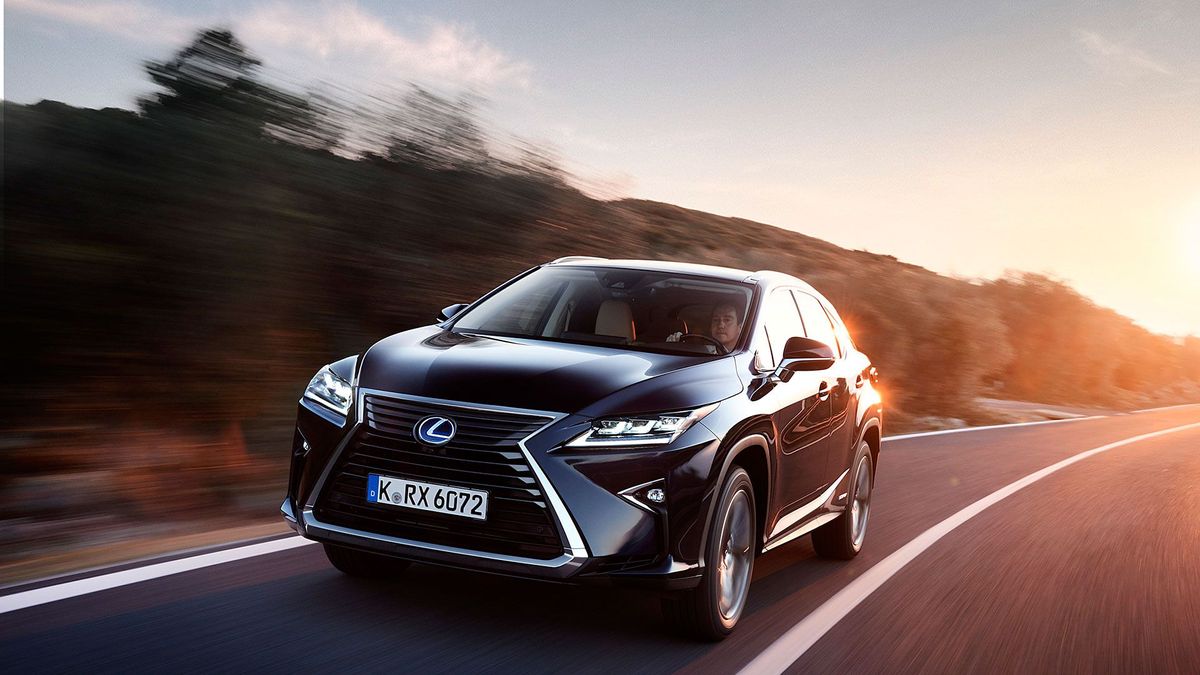 View gallery
First published: 4th December 2015
Share on Facebook on Twitter
Auto Trader Verdict:
Bold looks, a beautifully finished cabin and hushed hybrid powertrain all count in the RX's favour. Incredibly high equipment levels, strong residuals and low C02 emissions should also make it popular with company car drivers; however, its mild-hybrid powertrain is showing its age. The large battery pack limits boot space, the RX has much less grip than other SUVs, and in reality, the fuel economy (and range) will be average at best. It's really soothing to drive, but trails its rivals in a number of areas.
Need to know: 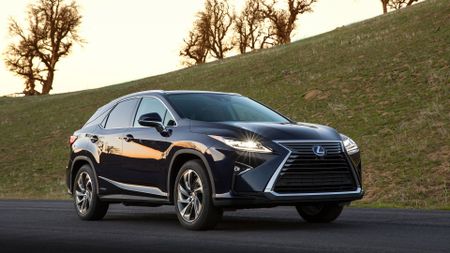 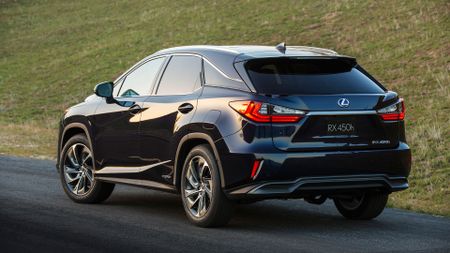 View gallery
What is it?
Hybrid 4x4s used to be a rare sight. The Lexus RX was one of the first, and for a while it was the only large, plush SUV that could reasonably claim to have an environmental conscience.

This new version, though, arrives at a time when Audi, BMW and Volvo have all launched their own high-riding plug-in hybrids, pushing the boundaries for all-electric range, dropping CO2 emissions figures further than ever before, and giving buyers a choice if they want a switch from diesel.

However, Lexus says this technology is too expensive and only suits a small number of buyers, so the latest RX is still powered by a 3.5-litre V6 petrol engine (this time with direct injection), plus electric motors on each axle for additional boost and, when needed, four-wheel drive.

Choose an entry-level SE and that means CO2 emissions of just 120g/km - significantly lower than anything you can get from similarly-priced diesel rivals - and a combined economy of 54.3mpg.

The other option is a 2.0-litre turbocharged petrol with 235bhp, but its fairly prohibitive tailpipe output of 181g/km means it'll make up just a tiny fraction of the sales here in the UK. 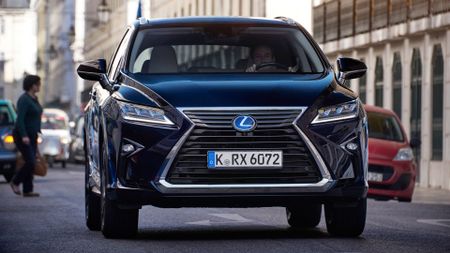 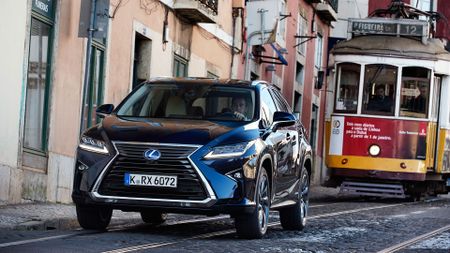 View gallery
What is it like?
Everything you'd expect from a big Lexus, and totally different to its mainstream competition. The RX is the brand's most popular model, which means this new version has been designed to appeal to existing customers first and foremost, and that means a focus on comfort and refinement.

The edgy exterior design, enormous grille, sweptback LED headlights and invisible C-pillars all suggest a cutting-edge machine, and the RX certainly stands out; but, once you settle down inside the smart new cabin and get moving, you soon grasp that this is a traditional luxury car.

That means big, comfortable and supportive seats, which are electrically operated, heated and ventilated on all but the base model. Classical trappings of glossy wood, soft leather and a big analogue clock combine with a massive 12.3-inch infotainment screen, plus an optional head-up display which is bright and clear.

The rather awkward 'mouse' pointer controller remains a bugbear, as it's overly sensitive, but new on-screen shortcuts have been added to make the system a little more user-friendly and intuitive than it was before. 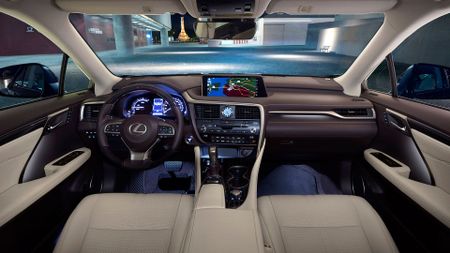 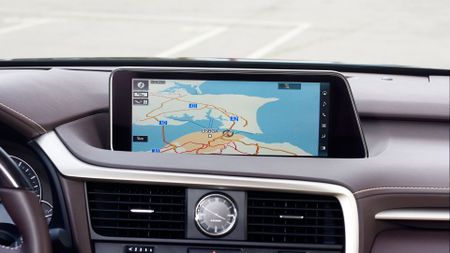 View gallery
As you would expect, fit and finish are exemplary, with every switch and surface your fingers come into contact with exuding an air of real quality. Where some rivals might have a more cohesive approach to interior design, the RX feels built to last, in every sense, mile after mile.

This new version is also bigger than before, with most of the extra space shoehorned between the wheels to improve the passenger space on board. It's worked, too, with enough head- and legroom to accommodate tall adults, even with the optional panoramic roof fitted to the car we drove.

The RX also has a nice flat loading bay, which can be accessed automatically simply by waving your hand across a sensor fitted inside the Lexus badge on the tailgate. However, the boot doesn't cater for luggage as well as the cabin looks after the passengers.

Unfortunately, the luggage bay is quite shallow, while the sloped glass tailgate robs even more room; and, with only 453 litres of space with the seats up, the RX falls well short of the Audi Q7 (650 litres), BMW X5 (650 litres) and Volvo XC90 (775 litres). 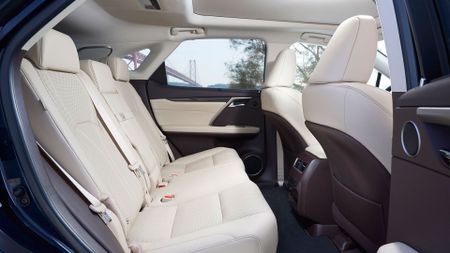 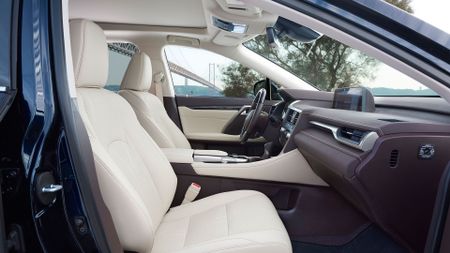 View gallery
Because much of the engine technology remains unchanged, the RX 450h feels similar to its predecessor on the road, but there are plenty of welcome improvements. The steering has been retuned and, while slow, feels a touch more accurate than before. Tweaks to the front suspension and a new set of adaptive dampers (standard on the F Sport model) ensure that the RX rides well, absorbing bumpier surfaces with relative ease, and making it a superb cruiser.

Working in tandem, the big V6 and electric motor produce a healthy 308bhp, so despite the RX weighing in at an almost Bentley-esque 2.2 tonnes, it'll still reach 62mph from rest in 7.7 seconds. However, if you get greedy with the throttle when overtaking, especially up an incline, the CVT gearbox sends the revs soaring. It settles down once you do get up to speed, but makes the power delivery feel somewhat all-or-noting, especially compared with the in-gear flexibility of a V6 diesel engine.

On the plus side, the level of refinement in the RX far exceeds that of any diesel. There is only a faint whisper of wind noise around the windscreen pillars on the motorway, and road- and tyre noise are both significantly lower than what you get from other large, sporty SUVs at this price.

Keep your inputs smooth and deliberate, and the RX remains steady and composed through sweeping corners; but, there is a penalty to pay for all this comfort and refinement. In tighter turns, there is a dramatic amount of body lean, and it pushes into squealing understeer at anything more than modest speeds. Mind you, there is no real reward to be had from driving the RX this way; drivers wanting BMW X5-like agility should look elsewhere. 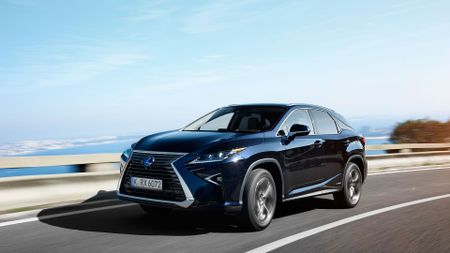 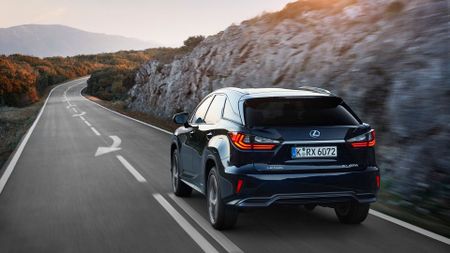 View gallery
Should I get one?
Set aside pricier plug-in rivals (the cheapest Volvo XC90 T8 starts at over £60,000, for example) and, on paper, the RX 450h stacks up well against its closest rivals. The hybrid system means it has much lower CO2 emissions than most diesel 4x4s, so company car drivers will pay less tax; and the RX also produces considerably less unpleasant NOx emissions than any diesel alternative - still a hot-button issue in the continuing wake of the VW 'defeat device' scandal.

Traditionally strong residuals, an enviable reputation for reliability and award-winning customer satisfaction are all part-and-parcel of the Lexus ownership experience, too; and, while the pricing is in line with its premium rivals', Lexus includes a tremendous amount of kit as standard.

So, as an ownership prospect, the RX has a lot going for it. But, the limited practicality, lack of genuine off-road ability, average real-world economy (we never managed more than 30mpg on our test) and some dynamic shortcomings mean that this SUV won't be everyone's cup of tea.
Key facts:
Also consider:
Audi Q7
A stunning cabin, softly cushioned ride and smooth diesel engine make the Q7 a fine SUV

Range Rover Sport
Supreme ride comfort and a fine chassis make this fun to drive, but it's very pricey 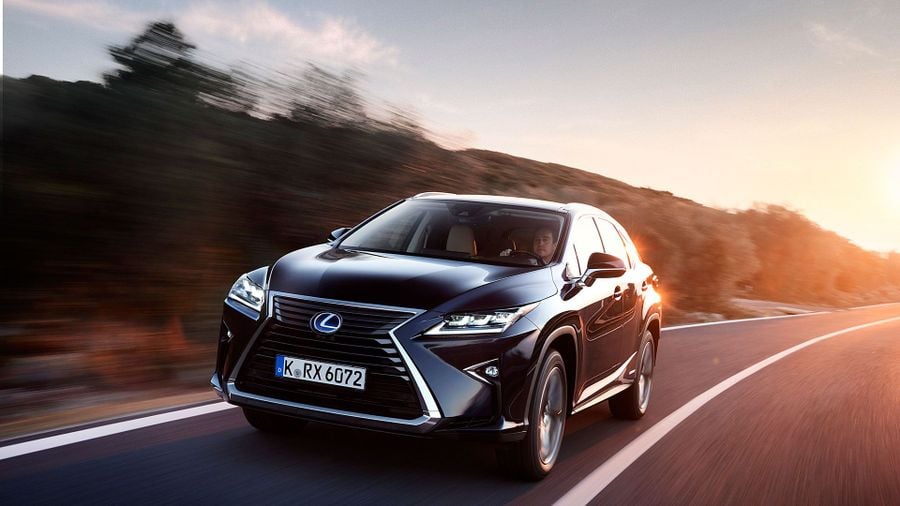