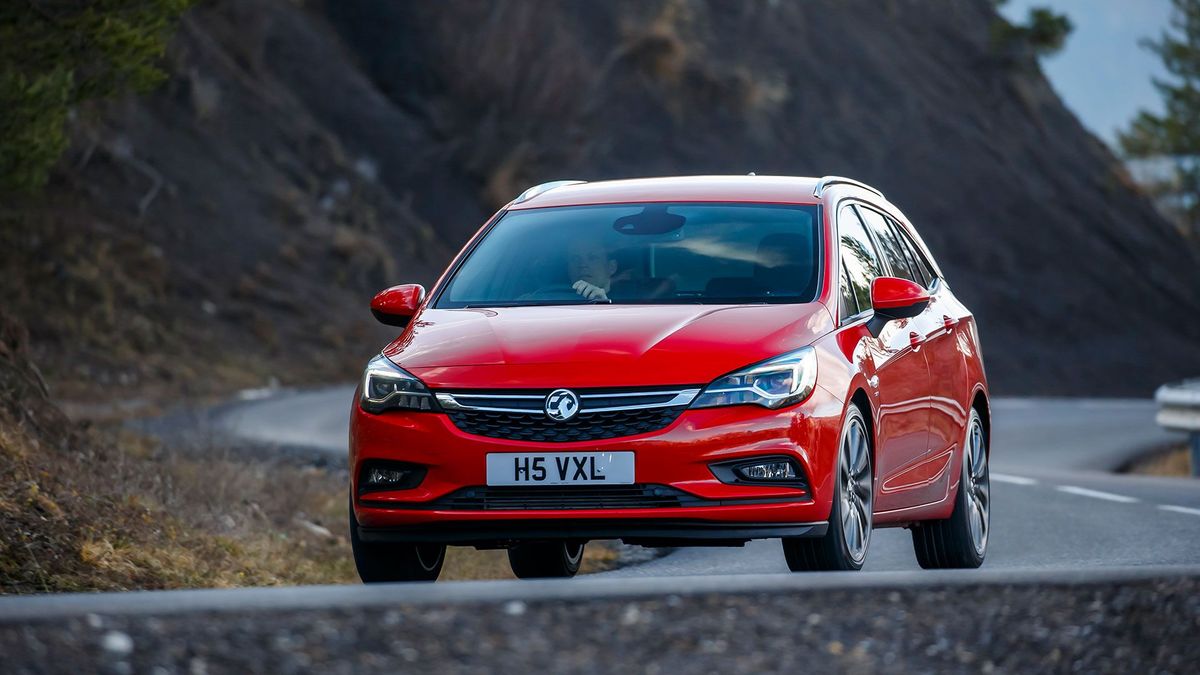 The Vauxhall Astra Sports Tourer is a real contender in the world of small estate cars. It’s good to drive, well equipped, strong on practicality and affordable to buy and run; in other words, it's everything that a good estate car should be.

Pick of the range
1.6 CDTI 136 Design
Most of the kit you want, with a strong, yet economical engine
Most economical
1.6 CDTI 110 start/stop Ecoflex Design
We’ve yet to try it, but the numbers are impressive with 89g/km of CO2
Best avoided
1.6i 200 Turbo Elite Nav
Powerful petrol engine makes Astra fast, but thirsty

The styling of the latest Astra hatchback isn’t exactly a huge departure from what’s gone before, and the Sports Tourer estate version isn’t a huge departure from the hatchback. It’s a smart, nicely proportioned car, and with swept-back headlamps and sharp creases running through the door handles, it also has some fairly swish-looking details. The back end looks rather different to those of its competitors, with thick rear window pillars that look separate from the rest of the bodywork, but distinctive looks are no bad thing. Even entry-level Design cars get alloy wheels and LED daytime running lights, and going for the high-end SRi and Elite models earns you front fog lights, silver roof rails rather than black ones, and gloss-finished door pillars rather than matt ones. It's a smart, if slightly unassuming family car.

Climb into the Astra, and you’re greeted by a cabin that’s well ordered and simple to use. The driving position is easy to get to grips with, and the dashboard has controls that are logically placed and clearly marked. The standard touch-screen infotainment system, which supports Apple and Android connectivity systems, takes a little more getting used to, but it does lend the cabin a fairly hi-tech feel. So do the OnStar services (free for the first year with the top two trims, optional on the rest of the range), which give you your own wifi hotspot and 24-hour emergency and breakdown assistance, along with access to your vehicle data through a smartphone app. Another strength of the Astra’s cabin is quality. There are some soft-touch materials and attractive finishes on show, and the design looks fresh and sophisticated. Granted, some of the panels - like the central partition between the driver and front passenger - feel a little scratchy and low rent, so it’s no match for a VW Golf on outright swankiness. However, Ford Focus buyers may well be looking through your window feeling a pang of jealously.The only real black mark against the Astra Sports Tourer is its rearward visibility, hampered by the thick rear pillars. 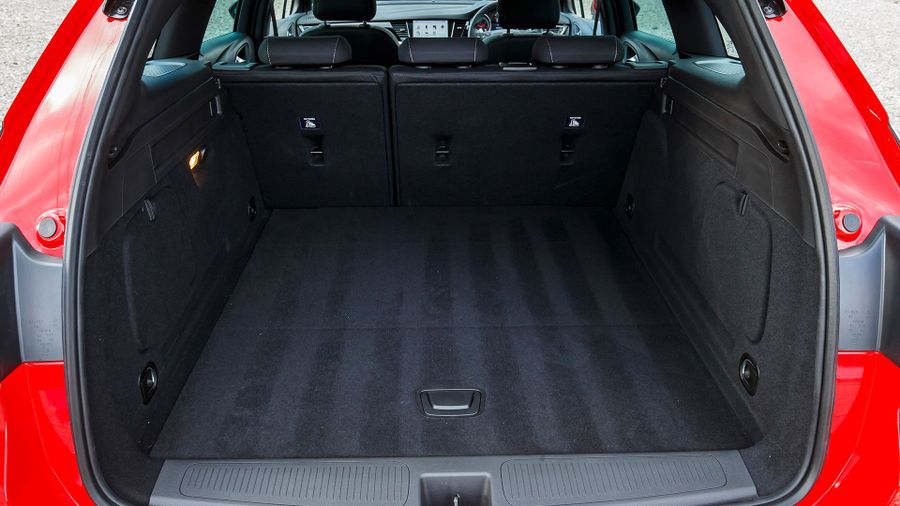 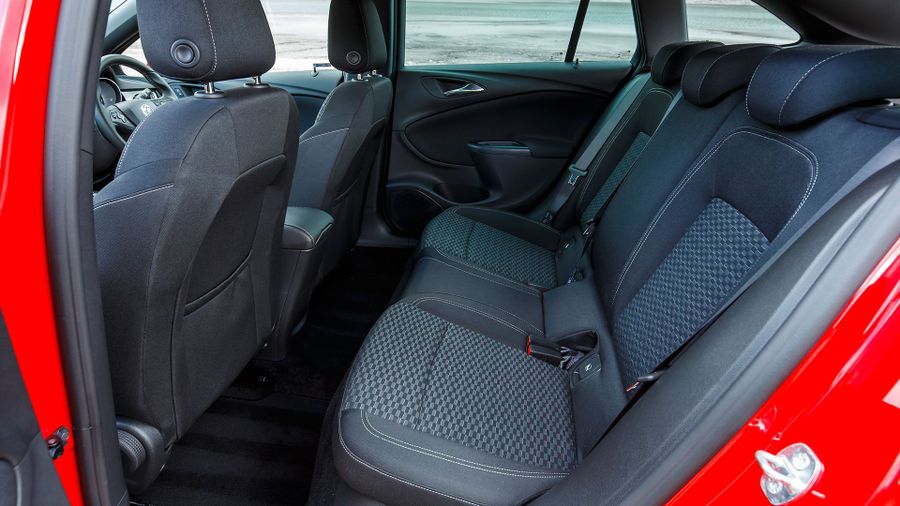 The space you get inside the Astra Sports Tourer’s passenger compartment is very competitive. The rear seats have easily enough head- and legroom to keep a pair of gangly passengers happy, and although the cabin is a little narrow, the wide middle seat and low transmission tunnel mean that life isn’t too uncomfortable when you squeeze three into the back. If you regularly have to shift child seats between cars, you’ll love the nicely designed Isofix points that are hinge-capped and that guide the fixings right into place. However, the important bit about any estate car is the boot, and the Astra does a decent job here. The 540-litre boot is bigger than those you get in either the Ford Focus Estate or Hyundai i30 Tourer, if not quite as gargantuan as that of the Peugeot 308 SW. And, unlike the Astra hatch, you have no load lip to muscle items over and the back seats fold pretty much flat and level when you drop them down for even more luggage space.

When engineering the latest Astra, Vauxhall paid particular attention to keeping the weight down, and this really shows in the way the car behaves on the road. It feels impressively light on its feet in the corners, allowing the car to turn quickly and crisply, giving a nice, agile feel. This is helped further by strong grip, tight body control and nicely weighted steering with consistent responses. You might, however, wish that the steering’s self-centring action wasn’t quite as insistent as it is. SRi models also have a Sport button that dumps more weight into the steering and sharpens up the throttle response, and it’s pretty effective in giving the car a slightly sportier character. Thankfully, the Astra also provides a reasonably supple ride. Yes, there’s a slightly firm edge over rough surfaces, but it rarely gets unsettled and strikes a really nice balance between comfort and control. 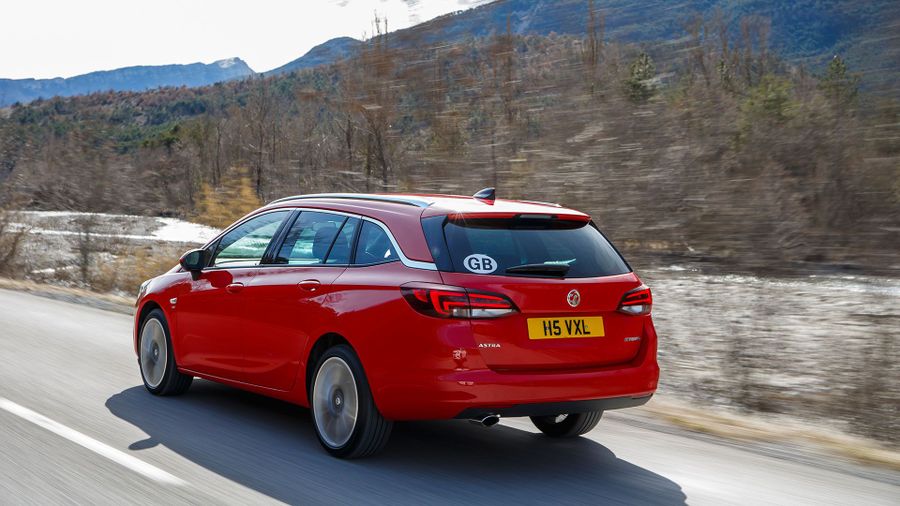 View gallery
“ The diesel delivers strong, consistent pull to keep you rolling along easily in most situations ”

There are eight engines to choose from in the Astra range, five petrol and three diesel, but so far, we’ve only tried four. The first of these is the mid-range 134bhp 1.6-litre diesel, and it delivers strong, consistent pull from around 1,500rpm to keep you rolling along easily in most situations. True to its 'Whisper' moniker, it’s also pretty quiet, but you do feel quite a few vibrations through the controls. There’s some road noise to be heard at cruising speeds as well, but wind noise is very well contained. The turbocharged 1.4-litre petrol with 148bhp is another flexible performer, and is also pretty smooth, even if it doesn’t make the Astra feel all that quick. That's an accusation you could also level at the three-cylinder 103bhp 1.0-litre unit, although it's stronger than you might expect of such a small engine: fine around town, happy to keep up with everyday traffic and easily capable of cruising at the legal limit on the motorway. It does get rather noisy when you rev it hard, but with peak torque coming in nice and low, you won't need to do that too often. The 197bhp turbocharged 1.6 petrol does give strong and sprightly pace, but it stops short of being a warm-hatch botherer and you won’t like what it costs to buy and run.

Vauxhall has got more sensible with the Astra’s pricing – it’s actually cheaper to buy than its predecessor – and that makes it an affordable option in a market where prices are creeping ever upwards. This, along with the impressive efficiency of many of the engines, will also keep tax costs down for company car drivers. The 134bhp diesel version we’ve tried returns official figures of 72.4mpg and 104g/km CO2 emissions, while the cleanest Astra, the lower-powered diesel fitted with stop/start and small wheels, is capable of 83.1mpg and 89g/km. A small word of caution, though: traditionally, Vauxhall’s resale values haven’t been all that strong, so you’ll probably take a bit of a financial hit when the time comes to sell the car on, at least compared to some other rivals we could mention. 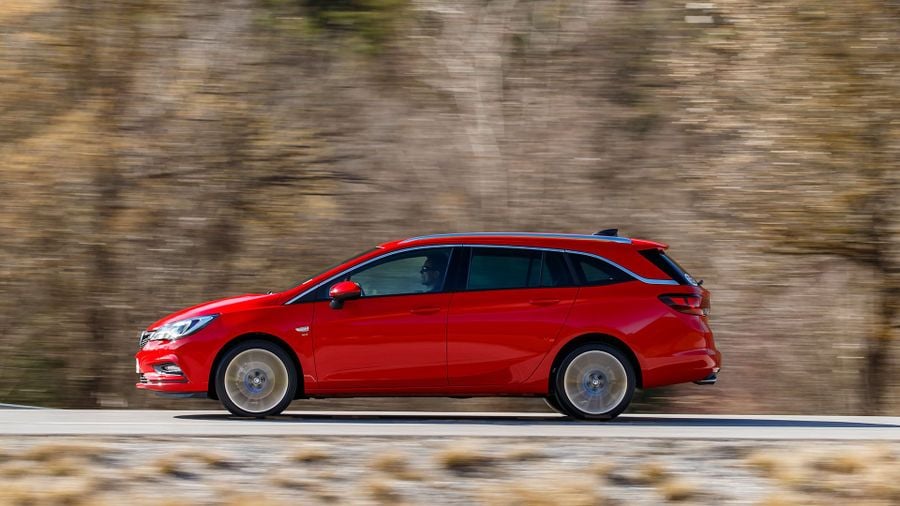 According to the Warranty Direct Reliability Index, Vauxhall couldn’t be any more average in the reliability stakes. The brand sits slap-bang in the middle of the table of the study’s manufacturer rankings. That said, the last Astra was by no means the firm’s most reliable car, with a below-average rating, but since that car and the latest car have very little in common from a mechanical point of view, you’d hope that situation would improve in the future. The three-year/60,000-mile warranty cover you get is pretty standard, but some rival manufacturers are a lot more generous, especially Toyota, Kia and Hyundai.

The Astra hatchback has been tested by Euro NCAP, and achieved the full five-star rating, and we have no reason to believe that the Sports Tourer would fare any differently. Be warned, though, that the amount of safety kit you get with your Astra depends on which trim level you go for. Lower-spec cars come with six airbags and a stability control system, but from SRi trim upward, you also get an additional suite of active safety systems that includes Lane Departure Warning, Lane Keep Assist and Autonomous City Braking - which will haul on the anchors for you if it senses a collision is imminent. 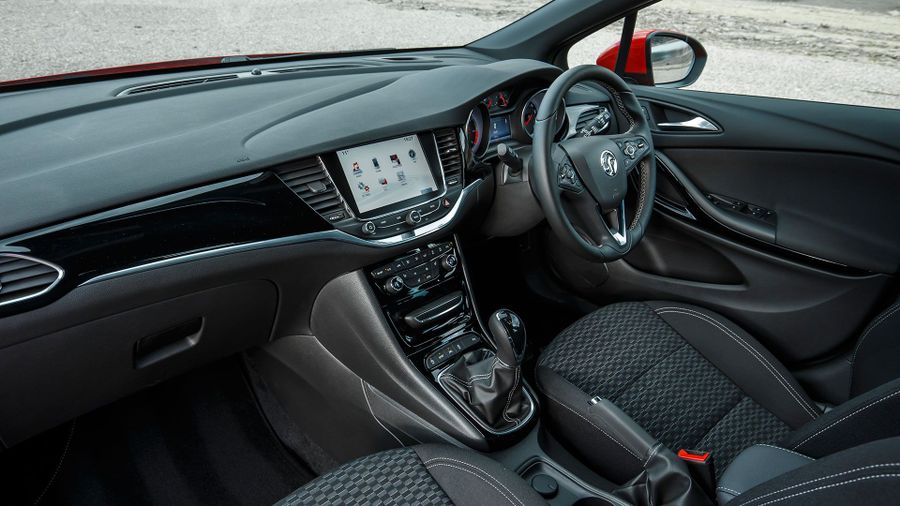 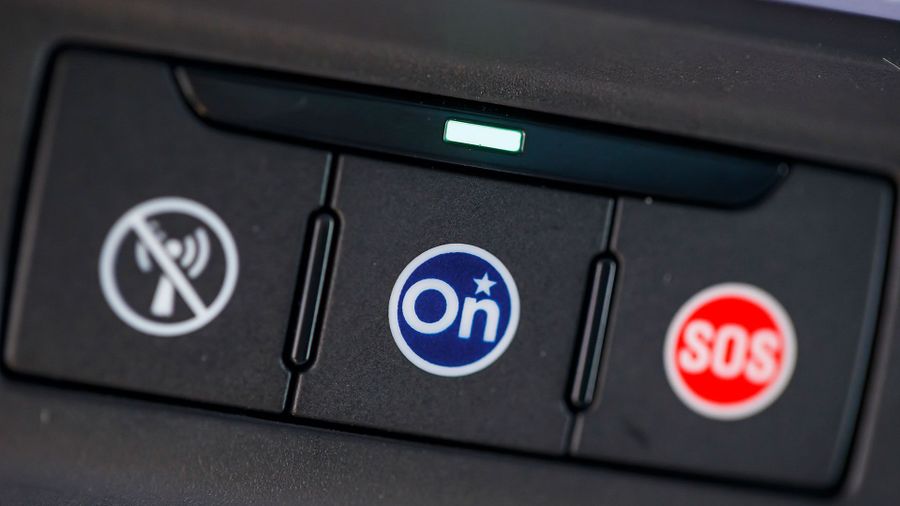 Even entry-level Design models have most of the goodies you want, including air-con, DAB radio, Bluetooth, cruise control and electric windows all round, while Techline trim adds sat-nav and a leather steering wheel. Energy trim does without the nav but features bigger wheels and heating for the front seats and steering wheel, while SRi cars come with sports seats, front foglamps and Onstar, the concierge and wifi service that allows for in-car web browsing, and real time vehicle information via a smartphone app. Range-topping Elite models have climate control, leather upholstery, electrically adjustable front seats and heated rear seats, as well as USB charging sockets for those in the back.

Because it’s a good all-rounder and a great little family estate. Good to drive, well equipped, affordable to buy and run, and practical enough to meet the needs of most small families, it does all the jobs an Astra should do very well indeed. 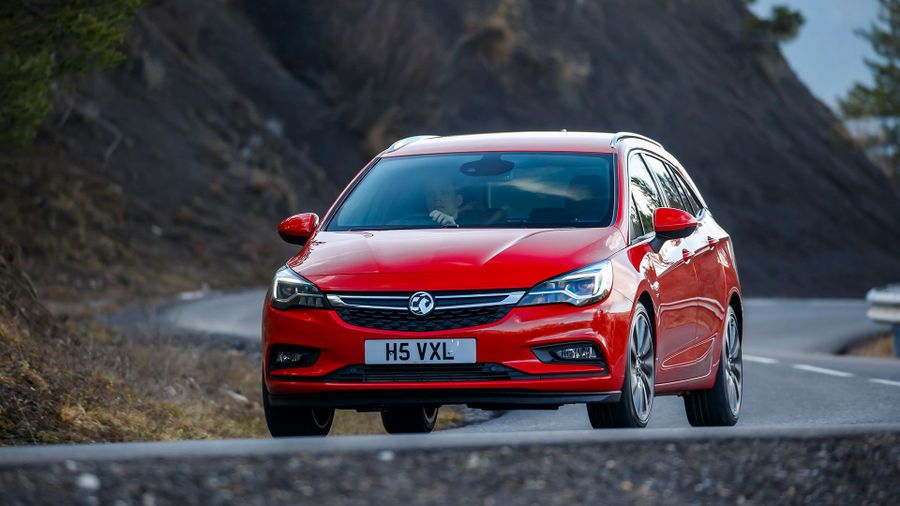