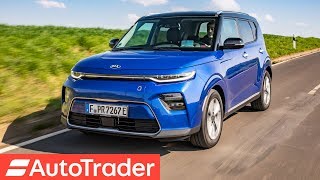 The Soul EV builds on the funky charm of its predecessor by maintaining the quirky styling, but upping the performance dramatically. It’s zippy to drive and boasts a very impressive 280-mile range on a single charge. If you’re in the market for an electric car, it’s definitely one of the first cars to check out.
Our verdict

Is the Kia Soul a good car?

Running costsSafetyFeaturesReliabilityInteriorPerformance
In its fully-loaded launch trim the Soul EV is priced around the same level as its e-Niro stablemate. Despite being more expensive Kia says the electric version sold more than the previous petrols and diesels combined so it’s little wonder the Soul is now an EV only model. The closest comparison is with the Hyundai Kona Electric, which is basically the same car underneath. The upfront price is equivalent but the Kia costs a little more on a monthly PCP, though Hyundai lets you spread the cost over a longer term. You might also be considering the Peugeot e-2008 and, with an equivalent spec, this is also on a par price-wise, though has less range and isn’t as powerful. Running costs for an EV are obviously very attractive, especially if you can charge at home and for company drivers reaping the rewards of huge Benefit In Kind savings. Factor that in and an EV like the Soul looks very attractive.

With 13 new and 214 used Kia Soul cars available on Auto Trader, we have the largest range of cars for sale across the UK.