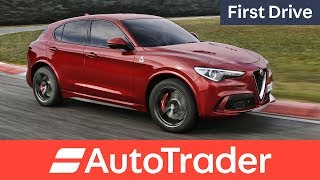 Alfa Romeo definitively put an Italian twist on the SUV formula with its bold and distinctive Stelvio and it’s always impressed with its combination of spirited driving dynamics and practicality. With this updated version and refreshed model line-up Alfa Romeo hopes complaints about interior quality and outdated technology will also have been answered, the new Veloce model providing a link between the regular range and the fire-breathing Quadrifoglio flagship.
Our verdict

Is the Alfa Romeo Stelvio a good car?

Running costsSafetyFeaturesReliabilityInteriorPerformance
Setting aside the Quadrifoglio performance flagship that Alfa Romeo considers a separate model in its own right, the standard Stelvio range is a choice between 2.2-litre diesel or 2.0-litre petrol engines, both of which are available in two states of tune according to the trim level. All drive through an eight-speed automatic gearbox as standard, the entry-level diesel version rear-wheel drive while the rest of the range is all-wheel drive.

If you’re looking to enjoy the Stelvio’s style but minimise your running costs that rear-wheel drive diesel version is the one to go for, given it’s lighter, suffers less transmission drag and has noticeably better CO2 and economy figures than the all-wheel drive equivalents. Across the board the diesels are better for all running costs and, if you do insist on petrol, there’s little penalty in going for the more powerful 280 horsepower version. There are no hybrids in the range.

As previously noted depreciation remains high on the Stelvio compared with its rivals and this will likely be the main consideration when pricing it up against others in the sector.

With 138 new and 253 used Alfa Romeo Stelvio cars available on Auto Trader, we have the largest range of cars for sale across the UK.