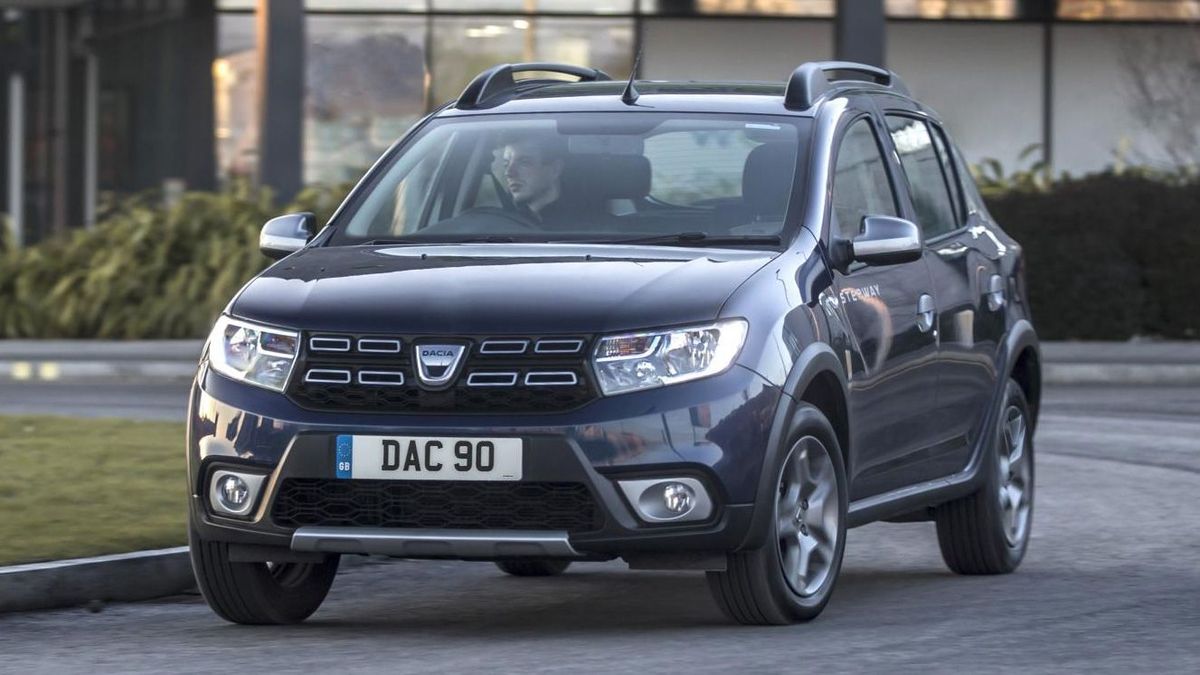 Arguably, the Stepway’s faux SUV styling and raised ride height gives it a greater measure of desirability than the Sandero hatchback it's based on. You’ll pay a bit more for those looks, and the fact that only the more powerful engines are available, but like all Dacias, the Stepway still offers excellent value for money. Not surprisingly, at this price point, it’s not the greatest thing to drive and it isn’t exactly sumptuous inside. However, it is as spacious as most family-sized hatchbacks, it’s reasonably well equipped, and it is based on proven Renault mechanical components, so what’s not to like? 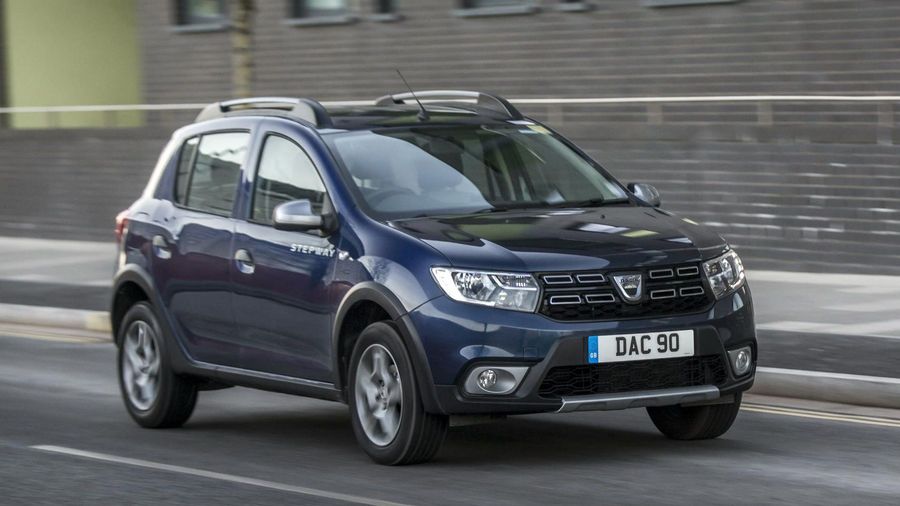 The Stepway looks significantly different to the Sandero hatchback it’s based on. With its 40mm raised ride height, 16-inch alloys, and additional bodykit – including front and rear scuff plates, black wheelarch extensions and roof rails – it’s effectively a crossover version of the hatchback. A honeycombed grille sits between Dacia’s signature daytime running lights. White, solid paint is standard, but there are several hues of metallic paint on the options list, if you want to jazz things up. 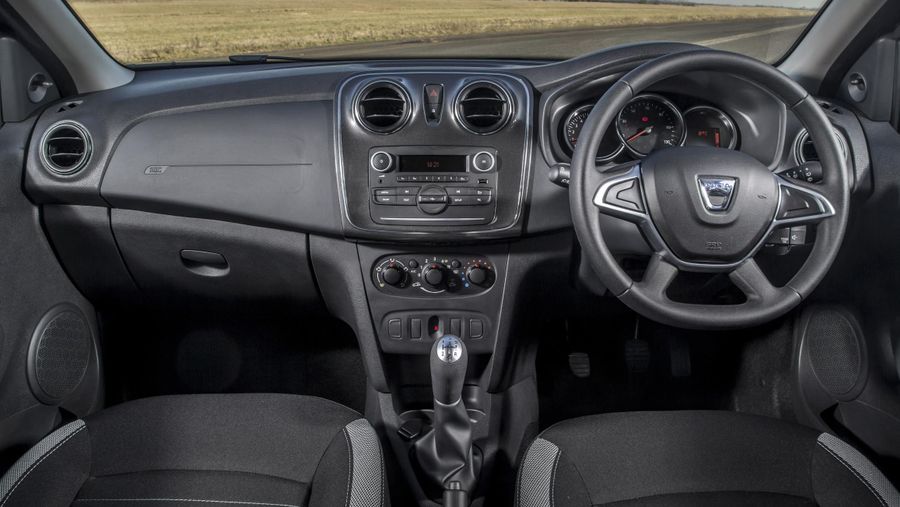 Unlike the exterior, the interior of the Stepway is identical to the regular Sandero’s. That said, because the Stepway only comes in higher trim levels, its interior is smarter than the more basic versions of the Sandero. The materials don’t have the same feeling of quality you would find in most other similarly sized cars, but for the price, it’s more than adequate. A four-spoke steering wheel features integrated control buttons for cruise control and speed limiter buttons on higher Laureate versions, although it only moves up and down and provides zero in and out adjustment. While the seat materials feel robust rather than plush, a splash of satin paint around the air-vents and centre console, and a dab of chrome on the door release handles helps lift the overall interior ambience. There’s a holster-style pocket on the side of the front passenger seat to stop your mobile from flying around the cabin, while further back, as well as a 12-volt power socket, there’s a useful bottle holder located in the rear of the centre console.

Overall, although we’re not talking the quality of, say, Volkswagen, the interior of the Stepway looks reasonably smart and modern, but it pays not to look too closely at the quality of the plastics. 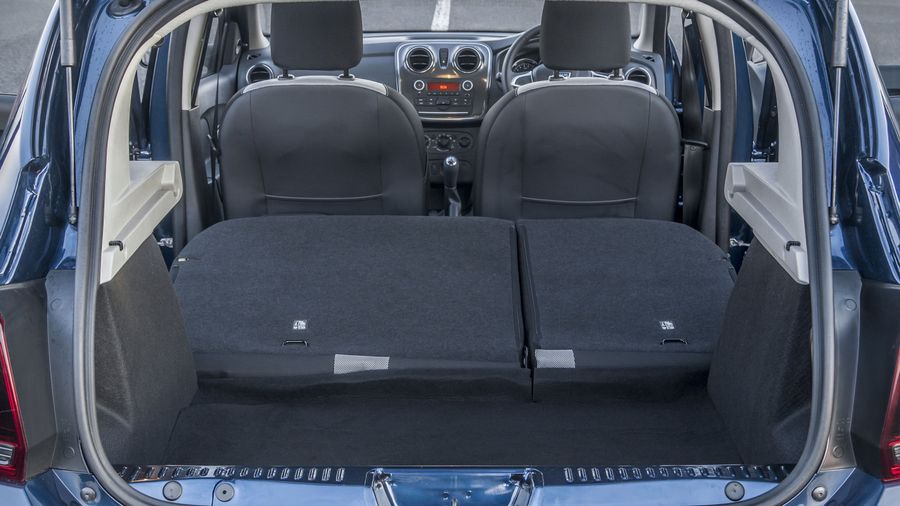 The Stepway may be based on the Renault Clio supermini, but you’d never guess that from the amount of space on offer. There’s head and leg-room to spare in the front, and you’ll easily get another couple of adults in the back seats (three at a push). Access, too, is very easy, thanks to large rear doors. Judged by supermini standards, the boot is pretty capacious too, at 320 litres, although that figure falls a fair bit short of the 380 litres you’ll find in a Volkswagen Golf. While flipping the 60/40 split rear seat backs frees up a useful 1200-litres of load space, the backs of the seats don’t fold entirely flat, so you’re left with a pronounced step in the load area. 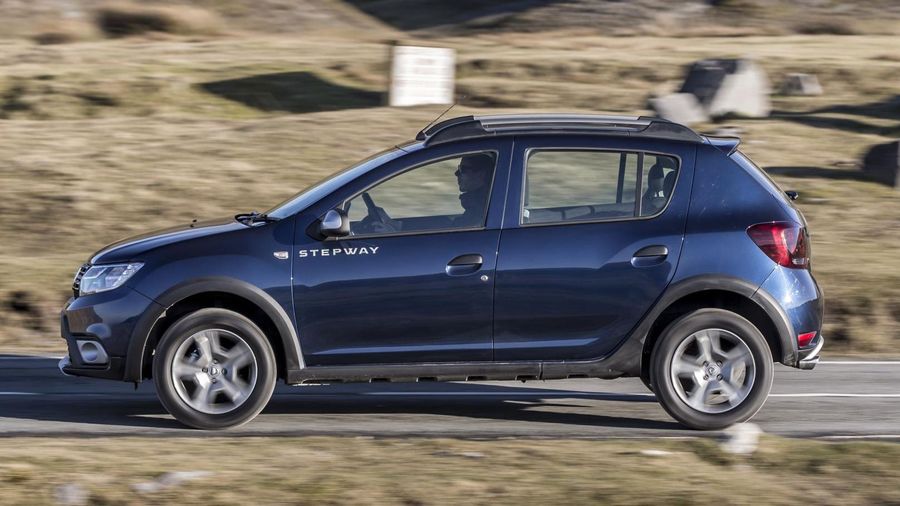 Compared with the regular Sandero hatchback, the Stepway sits a little higher on its suspension, and the extra travel that allows in the springs gives the Stepway a slightly softer feel. It still can’t smother the worst lumps and bumps, but it copes well with most of the challenges the road can throw at it. And, although bends do cause some body roll, it’s not too off-putting. The only reservation we have is with the steering, which lacks feel and is vague around the straight-ahead position. On the other hand, the lightness does make the car easy to manoeuvre in town. No matter which engine you choose, a fair bit of mechanical row comes through the engine bay bulkhead and overall, the cabin sounds quite open to the elements, so you’ll also have to put up with a fair bit of wind- and road-noise when you get up to motorway speeds. 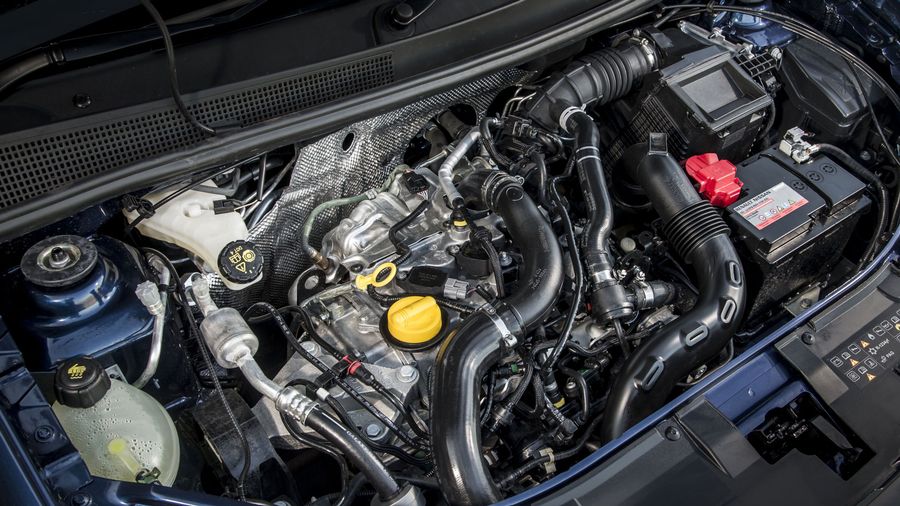 The Stepway isn’t available with the excellent 75 horsepower, 1.0-litre petrol engine found in the Sandero, but the good news is the entry-level three-cylinder 0.9-litre turbo unit is generally smooth and produces a healthy 90 horsepower. It pulls keenly from low revs and produces a decent amount of mid-range grunt, but less positively, it does tend to stutter on the over-run from time to time. It also emits an obvious three-cylinder crackle from the get-go, which gets increasingly shouty when worked hard, and because of a fundamental lack of sound proofing, it always sounds pretty vocal even when settled into a cruise. Despite the obvious noise, and a fair bit of discernible vibration – both through the pedals and the steering wheel – the 90-horsepower 1.5-litre diesel engine makes a fair fist of dragging the Stepway along at a tidy rate. 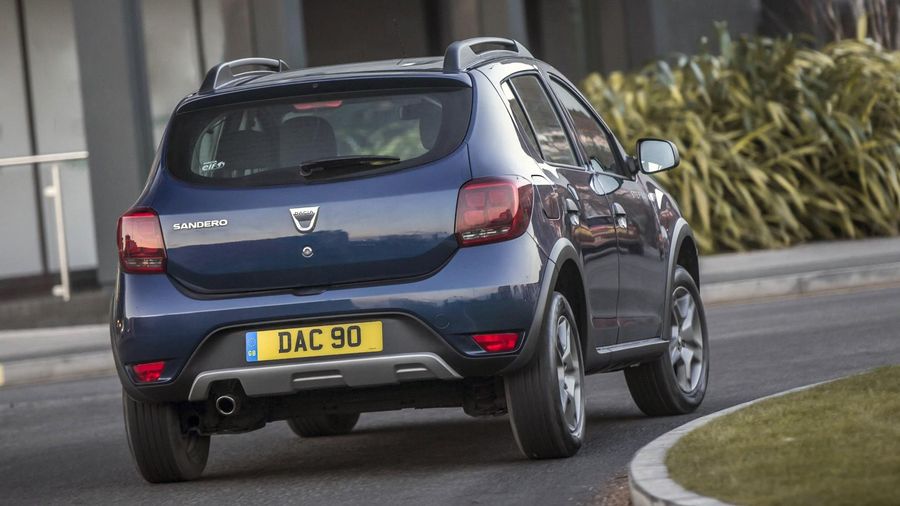 Naturally, it’s the Stepway’s purchase price that grabs all the headlines, and rightly so. This is the UK’s cheapest SUV – by some way – but that’s only half the story. Such low purchase prices mean depreciation is not a huge issue, while both engines promise good fuel economy. The diesel-engined models emit around the 98g/km CO2 mark, making them affordable company cars, and all models command encouragingly low insurance groupings. A three-year, 60,000-mile warranty is standard with the option to extend to five or seven years, but servicing intervals are quite frequent, at 12,000 miles between pit stops. 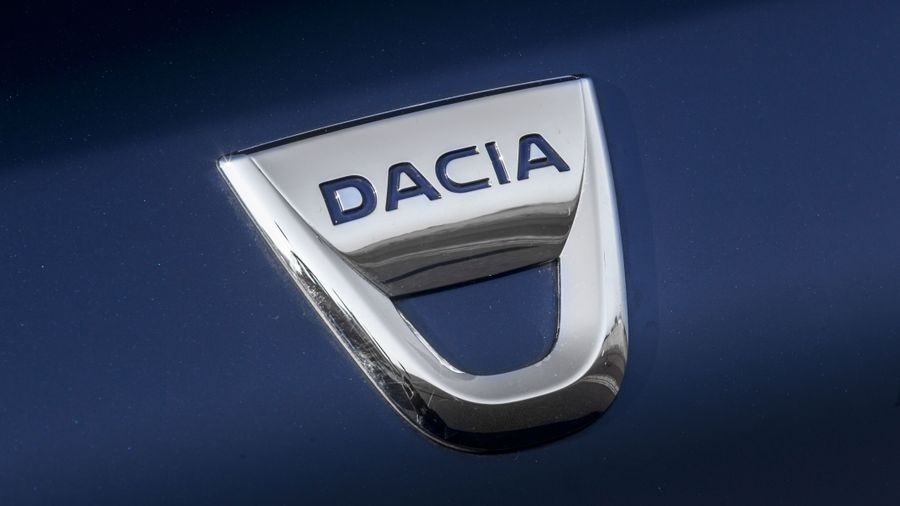 Dacia may be a relatively unknown brand in the UK, but its cars are based on proven Renault technology. However, the 2017 JD Power Vehicle Dependability Study found Davia, as a brand, scored below average for reliability when compared to other manufacturers. While not a disaster, it's a concern. If you're worried, longer warranties are available, extending the standard three years’ cover to five or seven years. 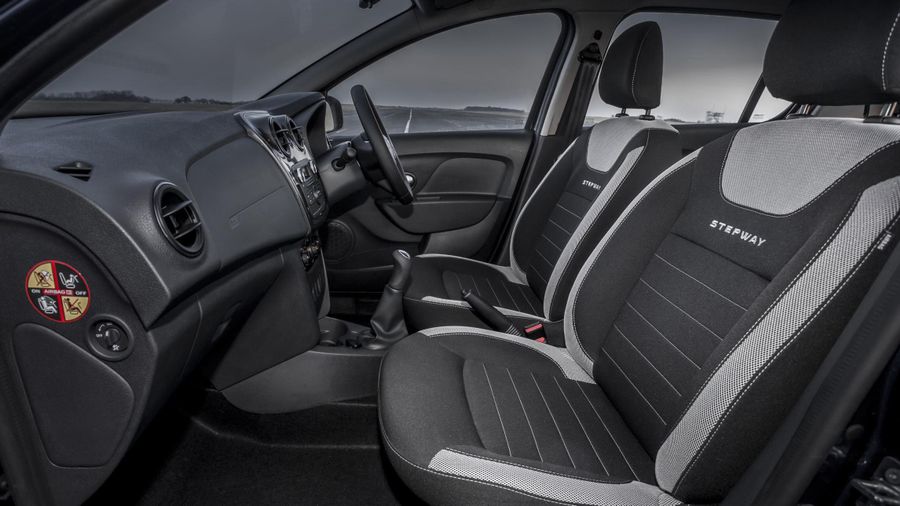 Although all models come with full electronic stability control, we don’t consider the four airbag tally sufficient in this day and age. Also, the four-star crash rating the Sandero – to all intents and purposes a lowered Stepway – achieved, is rather disappointing, especially when you consider how closely parent company Renault works with safety organisation Euro NCAP. This is brought into stark contrast when you consider most modern small family hatchbacks have no problem achieving a maximum five stars. The Stepway also lacks the option of automatic emergency braking that is increasingly common on more modern cars. 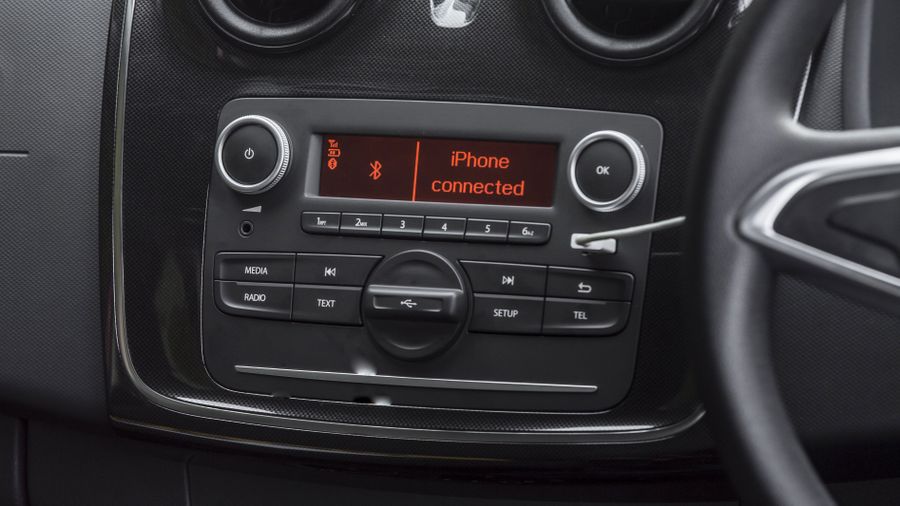 Despite what you might expect given the car’s low price, the equipment levels are not overly spartan. All models come with the extra body kit and roof rails, and even the more basic Ambiance models come with Bluetooth and electric front windows. Stepping up to the top Laureate trim adds air-con, a chrome front grille and all-round electric windows, as well as a touch-screen sat-nav system with aux and USB inputs, cruise control and rear parking sensors. To cap it all, even the options are affordable: the Touring Pack gives you a luggage net, transverse roof bars and a centre armrest, while leather upholstery is also reasonably priced. 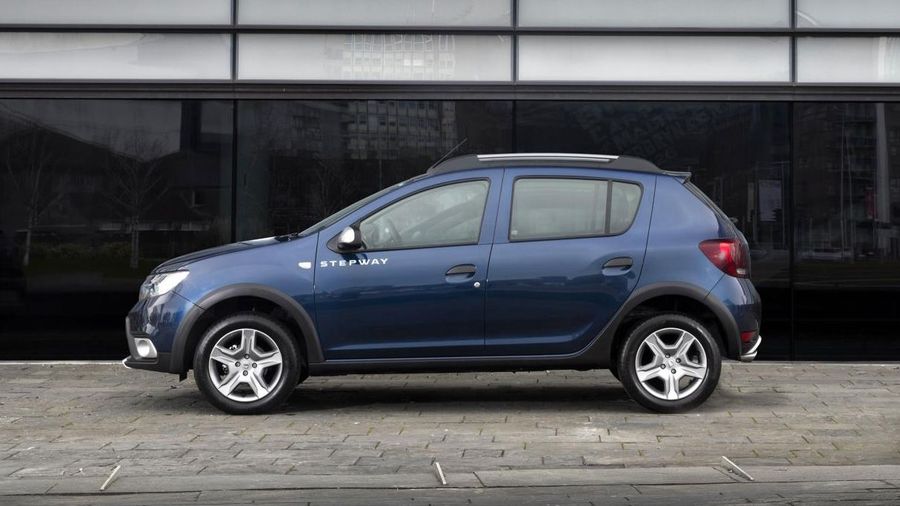 The Sandero Stepway is a car you might expect us to recommend solely on price. While the price is a huge attraction, there’s a lot more to it than that. In its own right, it’s a smart-looking, spacious and comfortable car, but when you see how little you have to spend to get so much, it really is an astonishing package. 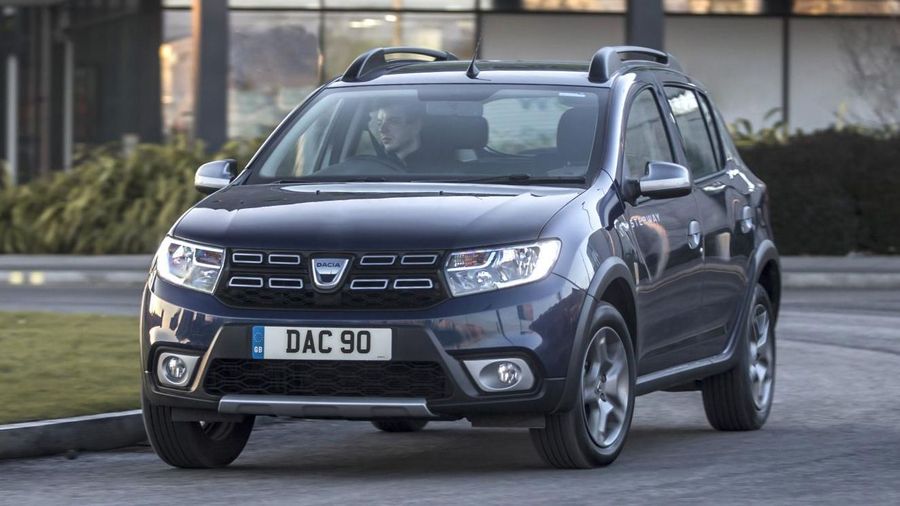