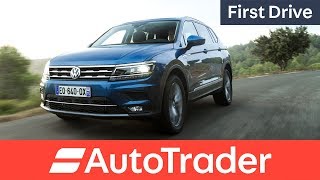 The Volkswagen Tiguan Allspace does pretty much everything a good family SUV should. It’s stylish, high in quality, massively practical, and easy and relaxing to drive. The thing is, the closely related Skoda Kodiaq does the same but costs thousands less than the Allspace. So, make sure you really want the VW badge before signing on the dotted line.
Our verdict

Is the Volkswagen Tiguan Allspace a good car?

Running costsSafetyFeaturesReliabilityInteriorPerformance
Compare the Allspace with most of its seven-seat SUV competitors on price – cars such as the Hyundai Santa Fe, Kia Sorento and Land Rover Discovery Sport – and it looks reasonably competitive considering the desirability of its badge. The one fly in the Allspace’s ointment, though, comes from a very familiar source. The Skoda Kodiaq, which is mechanically very, very similar to the VW, costs thousands less to buy and, aside from the badge and a couple of pieces of slightly spanglier interior trim, it’s very difficult to see what the extra money is giving you.

The two are more closely matched on fuel economy and CO2 figures, though again, the Skoda generally has a marginal lead when compared version-for-version. Where we think the Allspace will have a trump card to play, though, is on resale values. Those of the Kodiaq are impressively high, and with the Allspace’s desirable badge and image, we can see it being even stronger on that score.

With 27 new and 279 used Volkswagen Tiguan Allspace cars available on Auto Trader, we have the largest range of cars for sale across the UK.