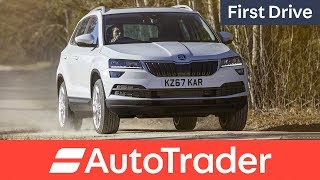 Whether you want a SUV-styled urban runabout or fully functioning 4x4 to take you off the beaten track there’s a model in the Karoq range to suit your needs, this broad spectrum of ability built on typical Skoda foundations of value for money, practicality and reliability.
Our verdict

Is the SKODA Karoq a good car?

Running costsSafetyFeaturesReliabilityInteriorPerformance
The days of bargain-basement Skodas are long gone and the Karoq is priced on par with most of its major rivals. What’s more, Skoda dealers are notoriously hard-nosed when it comes to dishing out discounts and used Skoda SUVs are highly sought after. On the other hand, as depreciation is the biggest single running cost that new car buyers face, this is certainly a feather in the Karoq’s hat.

As far as fuel consumption goes the Karoq is a heavy car so take the official figures with a pinch of salt, especially in the smaller-engined petrol models. Consequently, if economy is one of your prime concerns, then you’ll be better off sticking with a diesel, though company drivers will need to consider the Benefit In Kind surcharge, while four-wheel drive versions are considerably worse for CO2 than the front-wheel drive ones.

With 43 new and 1,472 used SKODA Karoq cars available on Auto Trader, we have the largest range of cars for sale across the UK.