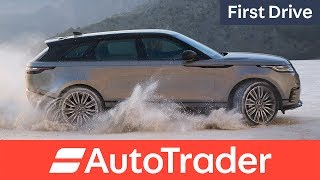 "What if you want all the prestige of a Range Rover, but without the tall, upright stance? What if, in other words, you want your Range Rover to be slinky and stylish? Well, this Velar, with its lower roofline and laid-back stance, might be just the thing, and it has the BMW X6, Porsche Macan and Jaguar F-Pace in its sights."

Read the review by category

At the lower end of its range, the Range Rover Velar goes head-to-head with cars like the BMW X4 and Mercedes-Benz GLC Coupe. It’s a larger car than these models, so it’s no surprise that it’s quite a bit thirstier, but the Velar fights back with much stronger resale values and lower maintenance costs. In other words, unless you’re a high-mileage driver, it should prove cheaper to run. Higher up the range, the Velar goes up against the larger BMW X6, Maserati Levante and Porsche Macan; even in this rarefied company, the Velar manages to look like a more cost-effective ownership proposition, its high resale values and now comparatively reasonable fuel costs earning it lower pence-per-mile figures. The one fly in the Velar’s ointment is the Jaguar F-Pace, which shares much of the same engine technology but looks even better value as an ownership proposition no matter which model you choose. Happily, many Land Rover dealers share their premises with Jaguar ones, so you can compare both cars in the same place and decide for yourself whether the Velar is worth the extra expense.