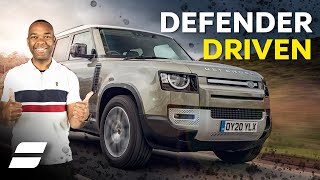 As a replacement for arguably one of the most iconic British cars of all time the new Defender has huge boots to fill and a vast range of expectation to satisfy, from traditional 4x4 fans steeped in Land Rover heritage to modern SUV buyers craving the latest tech. Its distinctive looks, undoubted off-road credibility and arch combination of style and practicality are a promising start in its all-out attempt to pluck buyers’ heartstrings
Our verdict

Is the Land Rover Defender 110 a good car?

Running costsSafetyFeaturesReliabilityInteriorPerformance
The starting price for the new Defender looks more reasonable than you might expect, and seemingly positions the new model between the Discovery Sport and the Discovery. In reality, and with the encouragement to personalise and equip your Defender according to your tastes and needs, you’ll see that purchase price rise quickly. That makes it considerably more expensive than its most obvious rival, the Jeep Wrangler but, at the other end, quite a bit cheaper than the Mercedes-Benz G-Class. All three trade heavily on their 4x4 credentials, Land Rover clearly seeing the middle ground between the two as its opportunity. The other serious off-road option in this class is the Toyota Land Cruiser, which isn’t as trendy or cool as the Defender but is arguably as credible in the rough stuff. Pricing here is on a par.

For private buyers running costs are going to be in line with expectations for a vehicle of this type, the four-cylinder diesels offering acceptable fuel consumption figures. CO2 will, however, mean crippling costs for company drivers who are best off waiting for the plug-in hybrid version. A pared back commercial version will also be offered in due course, intended to draw back farmers and other business users from the Japanese pick-ups they abandoned their original Defenders for.

With 969 used Land Rover Defender 110 cars available on Auto Trader, we have the largest range of cars for sale across the UK.