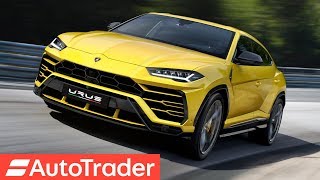 The Urus succeeds in its goal combining the extravagance and performance of a Lamborghini with the practicality and comfort of a luxury SUV. And crucially, you can turn either character on or off with the flick of a switch. Some might be a bit disappointed by the relatively humdrum interior, and it won’t do as well off-road as some of its rivals, but plenty of people will love the fact that this is a Lamborghini you can carry your kids and shopping in.
Our verdict

Is the Lamborghini Urus a good car?

Lamborghini Urus how good does it look

InteriorPerformanceAppearancePracticalityDriveabilityReliabilityEquipment
Compared to the extravagant exterior, the interior is relatively restrained, but there are still some suitably loud features. Most notably, gear selection, engine start/stop and mode adjustments are all done via a selection of levers and buttons on the centre console that look like they’re lifted straight from a fighter jet.

Elsewhere, much of the switchgear will be familiar to those that have been in recent Audis or Volkswagens. That’s no bad thing in itself, but for north of £160,000 you might expect a bit more exclusivity. While build quality is very good, some of the materials, particularly around the screen on the dashboard, feel a bit cheap for this kind of money. The infotainment system is operated by a touchscreen. It looks good and works well, although we maintain that touchscreens are generally harder to use on the move than systems that rely on buttons and dials. Surprisingly, DAB radio is only an option, but the Urus does come with Apple CarPlay and Android Auto.

With 48 used Lamborghini Urus cars available on Auto Trader, we have the largest range of cars for sale across the UK.