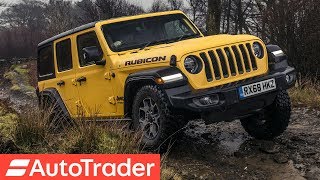 The Jeep Wrangler builds on a great heritage to rightfully stake its claim as one of the most competent off-road vehicles you can buy. It also looks cool and comes with a higher quality interior and a better infotainment system than previous Wranglers. Yes, its off-road ability does lead to compromises on the road, but these compromises are fewer and less severe than in Wranglers of old, and it’s more civilised than some other hardcore mud-pluggers we could name.
Our verdict

Is the Jeep Wrangler a good car?

Running costsSafetyFeaturesReliabilityInteriorPerformance
Choose the diesel engine over the petrol if you need to keep your running costs down over longer distances, because it’s easier on fuel. There’s not much in it on purchase price between the two- and four-door versions, so we’d suggest that the bigger car is worth paying the extra for as, not only is it a sight more practical, but it’ll retain its value and appeal to more buyers when it comes time to move on.

There isn’t much else on the market quite like the Jeep Wrangler within its segment. The lovable (but recently discontinued) Suzuki Jimny was more affordable, but tiny, while the Mercedes-Benz G-Class is much more expensive. At this level the new Land Rover Defender is a worthy alternative and the Jeep compares well on price, if not glamour.

They’re not as exciting to look at but the Toyota Land Cruiser and Mitsubishi Shogun Sport are also proven off-roaders and competitively priced. Against more road-oriented and mainstream SUVs and crossovers the Wrangler will be expensive to run, however.

With 45 new and 267 used Jeep Wrangler cars available on Auto Trader, we have the largest range of cars for sale across the UK.