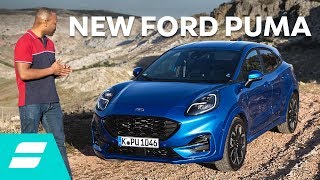 Yes it’s the Ford Puma, but no, it’s not that Ford Puma (the small coupe of the Nineties). Instead, the historic badge now adorns a baby SUV with a choice of 1.0-litre petrol engines and hybrid tech, that rivals the likes of the Audi Q2, Nissan Juke, BMW X1, VW T-Cross and Skoda Kamiq. Now joined by the feisty 200 horsepower ST version based on the equally cracking Fiesta ST the hot Puma combines crossover practicality with hot-hatch spirit.
Our verdict

Is the Ford Puma a good car?

Running costsSafetyFeaturesReliabilityInteriorPerformance
Based around versions of the same 1.0-litre Ecoboost engine the regular Puma sips petrol while giving you surprising spurts of acceleration. That means VED (or road tax, as it’s often known), insurance and fuel costs are all reasonable, as are CO2 emissions, which in turn dictate the amount business users will pay.

The fact that the Puma was one publication’s Car of the Year in 2019, plus the emotional pull of the name, means residual values should be strong, especially for the hybrid version, resulting in good PCP monthly finance deals.

The addition of a feisty ST variant adds further appeal, the fast Puma sharing much with the equally impressive Fiesta ST. It’s quite a lot more expensive, though not as much as it could have been when it looked like the post-Brexit price would be well over £30,000. That situation has now been resolved and it looks a lot more reasonable, albeit still a few grand more than the Fiesta.

With 945 new and 510 used Ford Puma cars available on Auto Trader, we have the largest range of cars for sale across the UK.

There are no owner reviews of the newest generation.