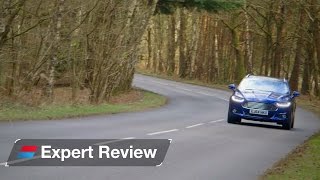 The Ford Mondeo was once one of the most common sights on British roads, but the relentless rise of the SUV has come at the expense of the traditional family car, the Mondeo included. There’s still plenty to recommend the Mondeo, though, especially in estate car form. It delivers a great balance of ride and handling, great refinement, and it’s also a spacious and practical family car.
Our verdict

Is the Ford Mondeo a good car?

Running costsSafetyFeaturesReliabilityInteriorPerformance
The Mondeo Estate is not a cheap car when compared with a lot of its family car rivals, but it’s similar in price to its key competitor, the VW Passat Estate. It’s also a good bit cheaper than cars like the BMW 3 Series Touring and Mercedes C-Class Estate, which Ford sees as rivals. The Mondeo’s resale values have traditionally been much lower than the competition’s, significantly elevating whole-life costs, so it‘s important to factor that into your sums. The diesel engines in the range are pretty good on carbon dioxide emissions, meaning affordable tax bills for the company car drivers with which the Mondeo has traditionally been so popular. That also equates to strong fuel economy. The hybrid is cleaner still, even if its efficiency figures can’t compete with those of more sophisticated hybrid models.

With 2 new and 1,733 used Ford Mondeo cars available on Auto Trader, we have the largest range of cars for sale across the UK.