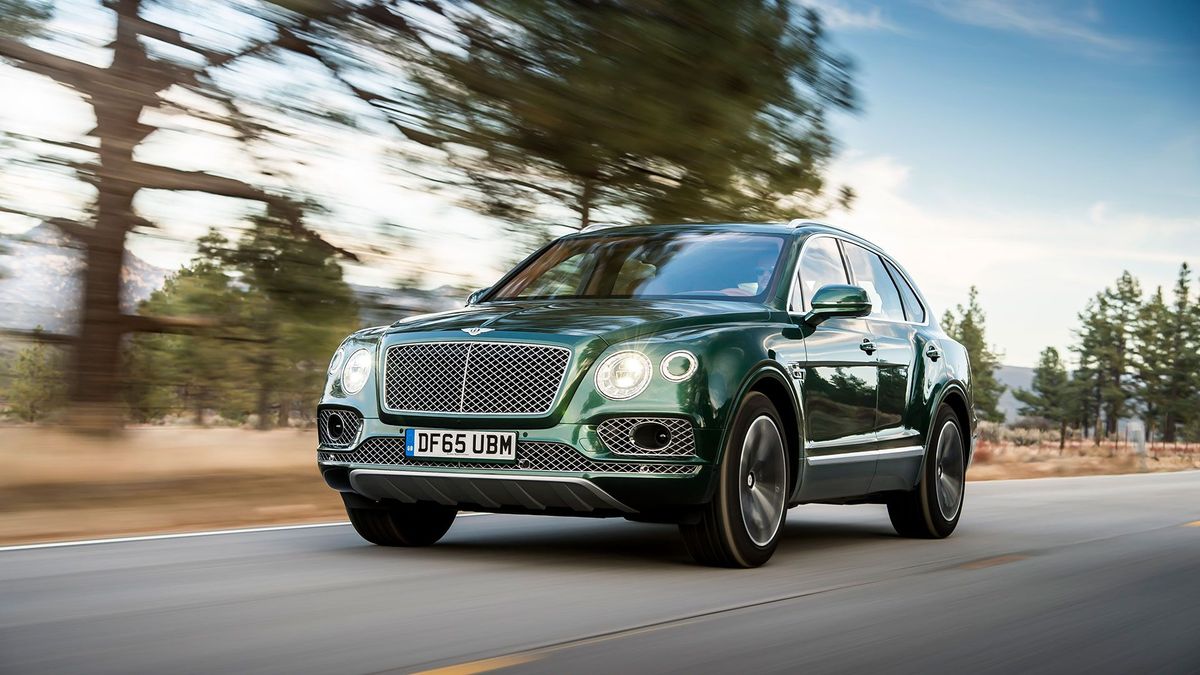 First published: 3rd February 2016
Share on Facebook on Twitter
Auto Trader Verdict:
It’s a testament to the painstaking work done at Bentley that this SUV feels not like a departure, but a natural extension of its current range. The Bentayga manages to look, feel, and drive like a traditional Bentley, and yet it also has a span of abilities that no other car in the line-up can match. It breaks new ground in areas that the brand sorely needed, but whether the same will be true of a seven-seat diesel version remains unclear.
Need to know:
What is it?
A huge (literally) and pivotal moment in the history of the Bentley Motor Company. The all-new Bentayga – the brand’s first SUV - has been seen by some corners of the automotive industry as a massive risk, a potential folly that could damage its reputation beyond repair.

Bentley, typically, have not exactly done things by halves, either. The brand claims that this is the fastest, most luxurious SUV ever created, a 2.4-tonne leviathan that’ll crack 0-62mph in 4.1 seconds, reach 187mph, crawl up 35-degree slopes and also handle like a sporting GT. How on earth have they managed that you may ask? Well, that volcanic power output emanates from a new 6.0-litre twin-turbo W12 engine hand-built in Crewe, which is so smooth at tickover that you can balance a 50 pence piece on its edge above the cylinder banks.

Seven-seat, diesel and hybrid versions will appear in due course, all of which will be more new firsts for Bentley, but to put the Bentayga into context, you have to understand how big its impact will be for the company. This car is easily the most modern Bentley ever, with proper state-of-the-art technology on-board, and it’s already proved to be such a hit with buyers that it alone will account for close to half of all sales in 2016. So, what is all the fuss about? 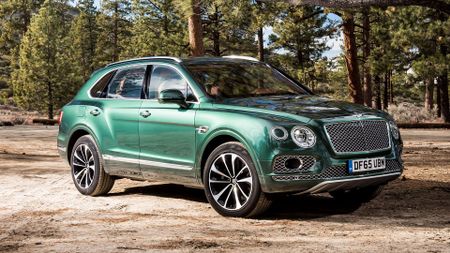 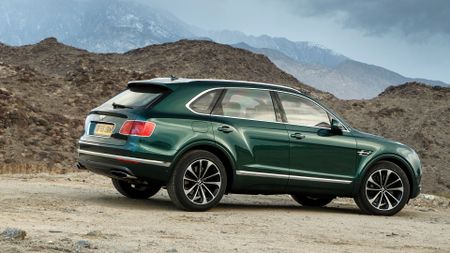 View gallery
What's it like?
Considering the mammoth task Bentley set itself when building this car, the fact that it even comes close to matching those ambitious targets should go at least halfway to justifying the £160,200 asking price. This really is an SUV like no other, and you can practically feel the wallets of the super-rich twitching at the prospect of such alluring automotive exclusivity.

Remember, too, that number is just where the prices begin. The closest current competitor is the Range Rover SVAutobiography, which tops out at £150,000 and comes with every single option box ticked. Land Rover might be reaching for the stars, but Bentley is already a part of the firmament, and knows how to serve this rarified atmosphere better than most.

To that end, there are boundless combinations of thick leather hide, gleaming knurled metal switchgear and highly polished wood veneers to choose from to suit your own tastes. They range from the garish to the gorgeous, but you’re guaranteed to find one that fits just right.

Still, however you decide to furnish the interior, you’ll be getting the finest cabin yet offered in a vehicle with ‘utility’ in its acronym. Apparently there was a fierce internal debate within Bentley about whether to tone down the luxury trappings in favour of more practicality, but the fact that this car has the same sumptuous cabin as a Flying Spur is key to its appeal. 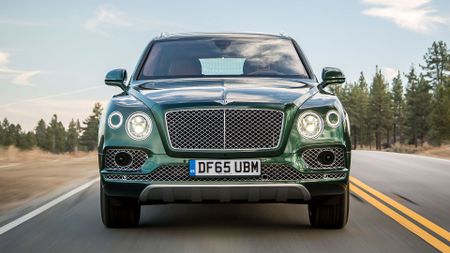 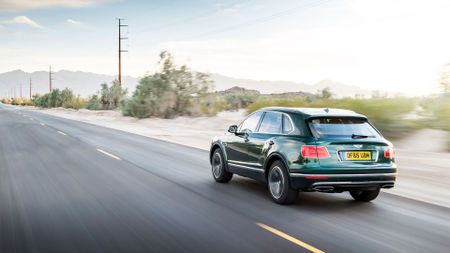 View gallery
That means you’ll definitely want to wipe down those Hunter wellies before climbing aboard after a day rambling across your country estate. Once you do, room inside is very generous, if perhaps not quite as vast as you might expect. As standard, the Bentayga comes with four individual seats, and a six-foot passenger will fit very comfortably behind even a tall driver.

This car shares some of its chassis architecture with the latest Audi Q7, and as a result, it is also the first Bentley that can really compete with the other German Powerhouses when it comes to in-car technology. The infotainment system is a combination of a fast touch-screen and a series of soft keys – the idea is to make these gadgets as unassuming as possible – but it’s graphically slick, and packed with the features that buyers in this price bracket demand.

Out on the road, despite the intimidating performance figures, the Bentayga feels utterly different to the current crop of bonkers-fast SUVs that includes cars like the Range Rover Sport SVR, Porsche Cayenne Turbo S and BMW X5M. It starts up with a whisper, not a howl, and you can immediately tell that it drives with more restraint and subtlety than its peers. 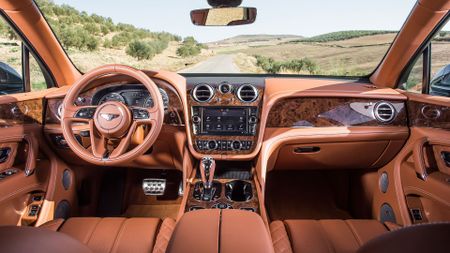 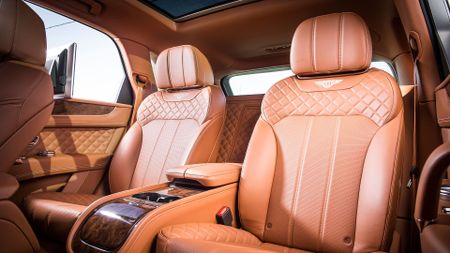 View gallery
The new W12 is a prodigious engine, producing all of its 663lb ft of pulling power (over 150lb ft more than the supercharged V8 in the Range Rover SVR) from just 1,350rpm. It’s so effortless, in fact, that it's tempting to just waft along without pushing beyond half-throttle.

When you do put your clog down, though, the acceleration produced is truly startling. The engine suddenly surges into life, the eight-speed gearbox knocks down a couple of ratios, and you surge forward with sheer brute force. Bentley claims this is the world’s fastest SUV, and when it comes to top speed that’s correct; 187mph is beyond the reach of any rival. However, the 0-62mph time of 4.1 seconds (matching the lighter Cayenne Turbo S) is just as impressive.

The scale of that achievement becomes even clearer when you consider how well the Bentayga handles, whether you’re on Tarmac, rocky boulders, sand dunes, or a racetrack. By rights, it should handle with the grace of cruise ship. The enormous engine up front means that the weight distribution is around 60/40 front-to-rear until you put fuel inside it, and the luxury materials mean it weighs well over three tonnes when fully loaded.

Yet the way it can scythe through corners at speed, shrug off bumps and ruts and proceed calmly over steep ascents and traverse slippery obstacles absolutely beggars belief. This is all down to a new active dynamics 48v electric anti-roll bar system, which uses a pair of motors to respond to road conditions in double-quick time, adjusting the stiffness at each individual wheel independently. 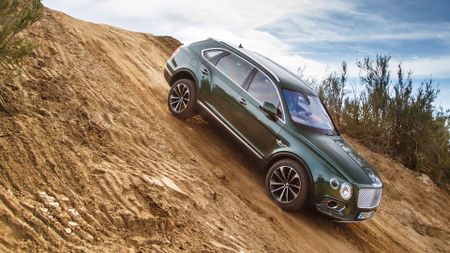 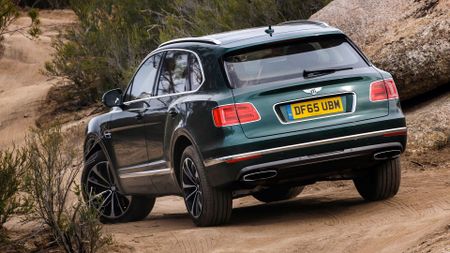 View gallery
The result is an excellent ride (there is only a slight shimmy on poor surfaces, even on the optional 22-inch alloy wheels) but very little body roll. Normally, heavy cars with air springs take an age to settle down after you hit a bump, but the Bentayga simply absorbs it at the first time of asking, and then hunkers down again, giving it tremendous corning poise. The steering also deserves a mention; it’s consistent, accurate and surprisingly communicative.

Indeed, it’s the huge steel brakes, rather than the new suspension system, that will be the limiting factor if you do decide to drive your Bentayga with a bit too much vigour. We’re told that both an optional sports exhaust and carbon ceramic brakes are in the pipeline for those who do plan to indulge in spirited driving in their super SUV on a regular basis.

Bentley concedes that most buyers are unlikely to indulge in much heavy off-roading, but should you choose to venture off the beaten track, you’ll find the Bentayga very capable. It won’t outfox a Land Rover in the rough stuff, but it gets mighty close, armed with electronic differential-locks, hill descent control and (as long as you spec the All Terrain package) four off-road driving modes to choose from, including sand, rock, mud and snow. It will take some scary angles before coming unstuck, but from inside the car, everything feels totally serene. 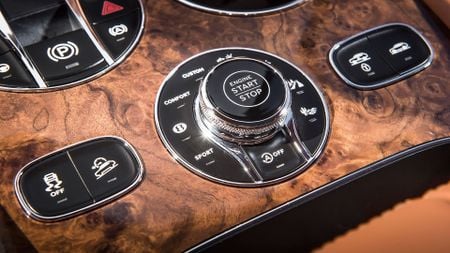 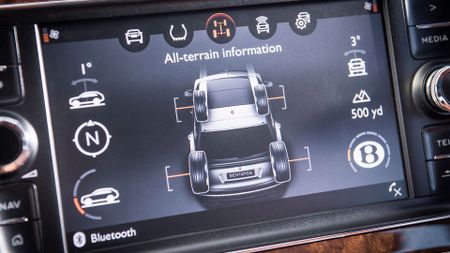 View gallery
Should I buy one?
On average, most Bentley buyers own around seven cars – so perhaps that question is better rephrased as ‘Should I acquire one for the portfolio?’ In all seriousness, the Bentayga should only really be under consideration for you if money is no real object to your garage.

Apart for the substantial cost of buying one, and spending around £50,000 equipping it to your own tastes (the current average – you could easily spend more), the W12 has a serious petrol habit, even after being fitted with cylinder-deactivation technology and direct injection.

Still, for those who can afford it, the Bentley pulls off the remarkable trick of actually feeling like it might be worth that kind of ludicrous sum. There is almost no other car that has had to meet (and fulfil) such an incredibly broad remit, and while the styling remains divisive, as an engineering achievement alone, the Bentayga deserves the success it seems destined for.
Key facts:
Also consider:
Range Rover
Could teach the Bentley a lesson off-road, but feels outclassed inside 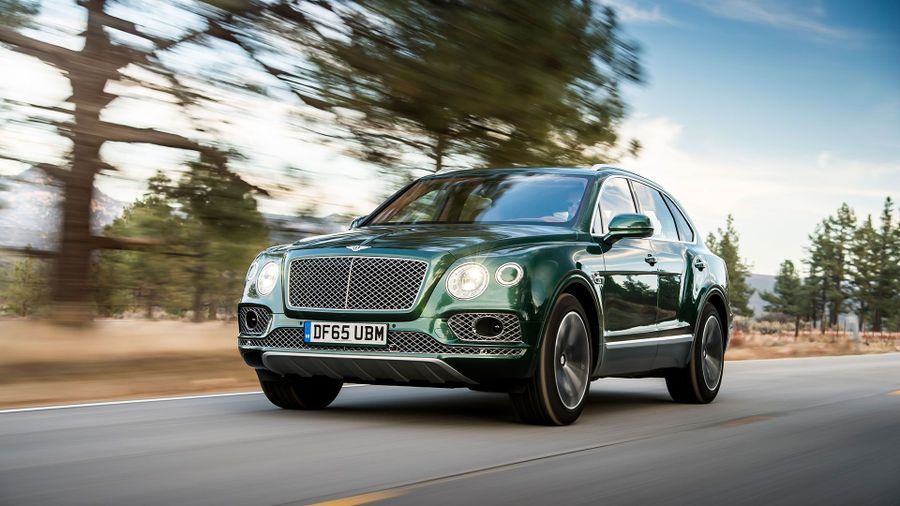