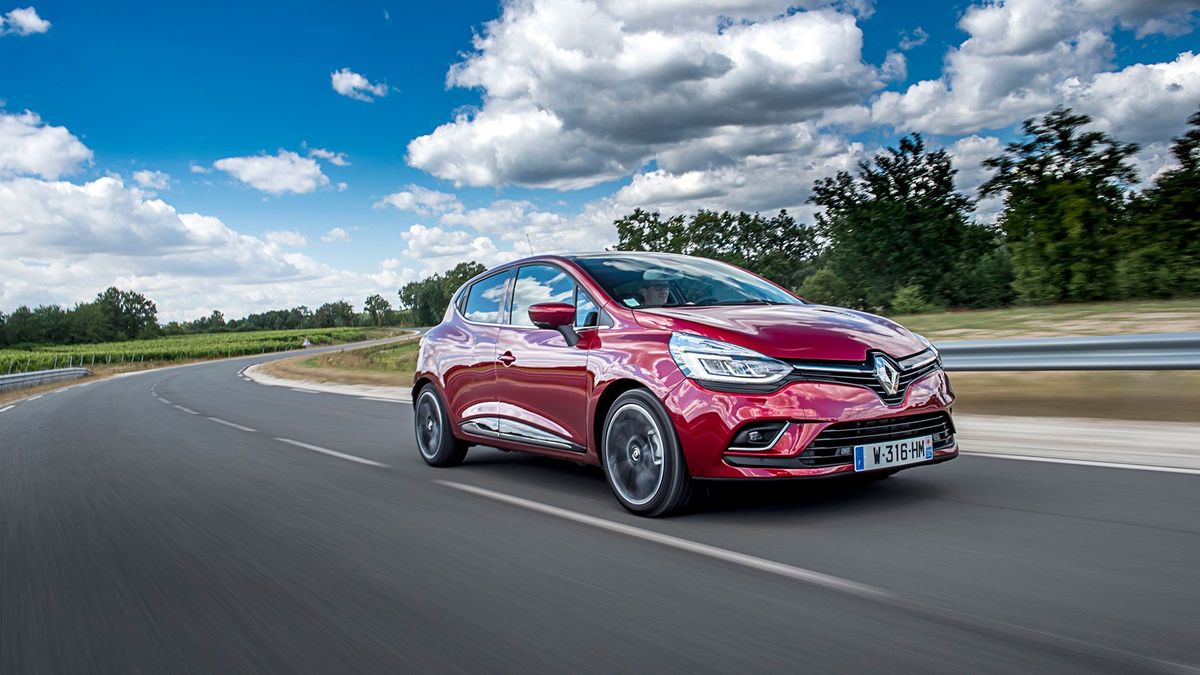 First published: 15th July 2016
Share on Facebook on Twitter
Auto Trader Verdict:
As always, the Renault Clio is a very solid contender in the supermini class, if not quite up there with the best. There’s a lot to like, including its style, sophisticated driving manners and punchy turbocharged petrol engine, but all that good stuff is rather undermined by so-so performances in the areas of practicality and interior quality. Good, but not the best.
Need to know:
What is it?
A slightly revised version of Renault’s stylish supermini contender, and never has the word ‘slightly’ been more appropriate when talking about a new car. There should be prizes dished out to anyone who can spot the differences between old and new.

For anyone who’s not an eagle-eyed, die-hard Clio aficionado, let us explain the changes. The front grille has been reworked and the restyled headlamps have been given a c-shaped motif to match the one in the rear light clusters and to make it look a teensy bit more like the all-new Megane. The rear bumper has been reshaped as well, but from an exterior styling point of view, that’s about your lot.

The revisions inside are even harder to spot. Some of the interior plastic panels – including those in the doors and on the steering wheel – have been replaced with higher grade items, while there’s also new design for the gearlever and one or two new trim pieces. Question is, are these minor tweaks enough to give the cabin the desired lift?
What is it like?
Unsurprisingly, the short answer is no, sadly. There’s hardly any difference to the overall feeling of quality because those new panels don’t feel a whole lot posher, and there are still plenty of others that are rather unappealing to both the eyes and the fingertips. It’s certainly no Volkswagen Polo for plushness, and it’s pretty mediocre by the standards of the class.

The dashboard layout hasn’t changed much, either, so there are still some ergonomic issues, with switches that are poorly marked and strangely placed, along with an R-Link touch-screen system that has messy graphics and confusing menus - although this optional system is still responsive, and quicker than the ones you'll find in some rivals.

We’ve yet to try the two infotainment choices below that, the higher of which also incorporates a 7.0-inch touch-screen and the other of which is little more than a downloadable smartphone app and a cradle, which frankly, means you're better off using Bluetooth for music, and traffic apps like Waze to find your way instead.

The equipment levels have improved across the board, though, with more included as standard on each trim level. The entry-level Expression cars are still pretty basic with electric front windows, central locking, cruise control, Bluetooth and a DAB radio, while Play versions add alloys, air-conditioning and front foglights. 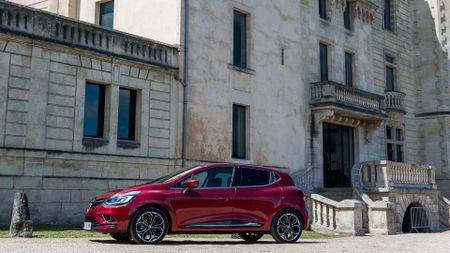 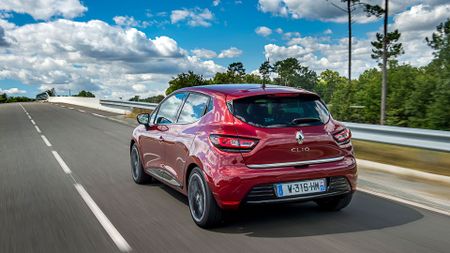 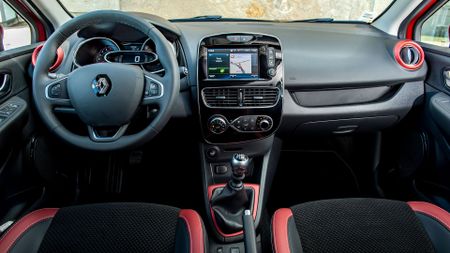 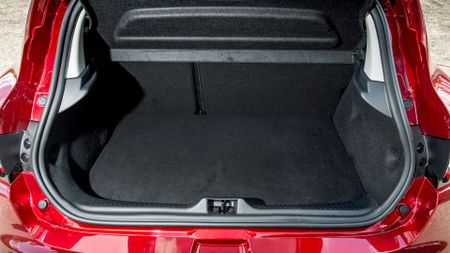 View gallery
Obviously with the changes being so minor, the Clio’s practicality is also unchanged. That again means it’s pretty average for the class, with adequate-if-not-exceptional space for a pair of adults in the back (head- and legroom are both a bit limited for anyone much over six foot) and a reasonable boot, with a large capacity, but an awkwardly high loading lip.

Our test car’s 118bhp 1.2-litre petrol turbo engine is nothing new to the Clio, either, but the fact it’s paired to a six-speed manual gearbox is. Previously, this unit was only available with Renault’s complex twin-clutch EDC transmission, and the availability of a manual makes it considerably cheaper to buy. It’s a much nicer combination, too, because although the manual shift is a little notchy, it’s better than the jerky and slightly sluggish shifts you get from the EDC.

The engine itself is a wee bit flat at the very bottom of the rev range, but there’s enough fizz from 2000rpm to give it good flexibility and it delivers reasonable pace when you work it harder. It doesn’t become too loud or too coarse, either.

Elsewhere, the Clio’s mechanical bits are completely unchanged, and so, as a result, is the driving experience. It’s not exceptional in either ride comfort or handling prowess, but it gives a good balance of both abilities. The steering doesn’t give you much in the way of feel, but at least the weighting is consistent and predictable, so it's easy to drive.
Should I get one?
There’s no real reason why you shouldn’t. Granted, the Ford Fiesta and Volkswagen Polo are better all-rounders, but if you prefer the looks of the Renault (and we can definitely see why you would), then you won’t be disappointed. It's good to drive, particularly with this engine, fairly refined, and smarter than before.

Yes, the Clio, especially the version we drove, is not a cheap car these days, costing £15,455, but compare that with equivalent versions of the rivals mentioned above and it’ll save yourself a couple of hundred quid. On the flipside, though, the Clio won’t be as cheap to run as either of its rivals, with higher CO2 emissions and fuel consumption.
Key facts:
Also consider:
Ford Fiesta
By far the best car in the class to drive, and competitive in other areas

Peugeot 208
Another stylish Gallic contender, and an efficient one too, especially the diesels

Find a Renault Clio in our classifieds 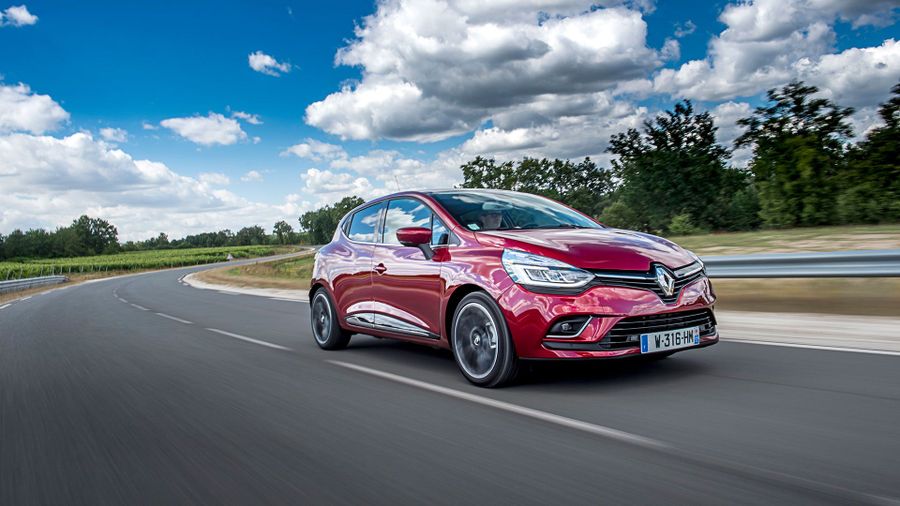