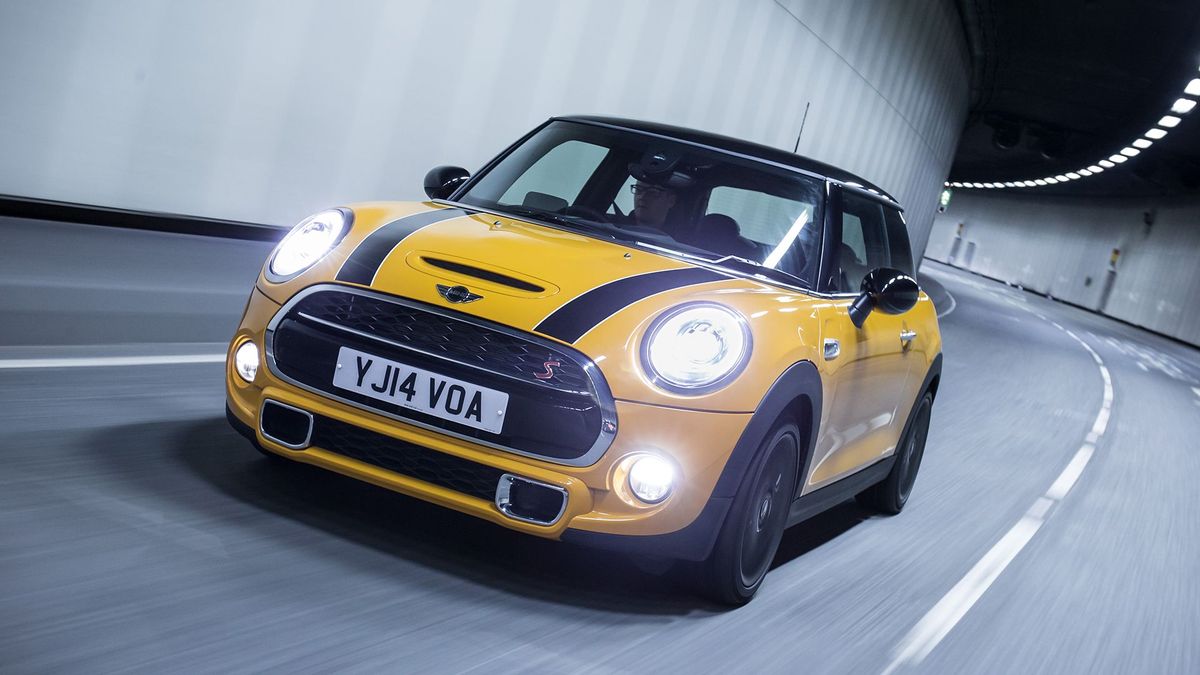 Small cars should be about style, fun, quality and practicality. The Mini hatch offers the first three traits in spades and is bursting with character but it can't match some rivals for the latter

Pick of the range
1.5 Cooper
Best balance of performance and affordability
Most economical
1.5 Cooper D
Almost 81mpg is not to be sniffed at
Best avoided
Cooper S Automatic
Expensive to buy and gearbox isn’t great 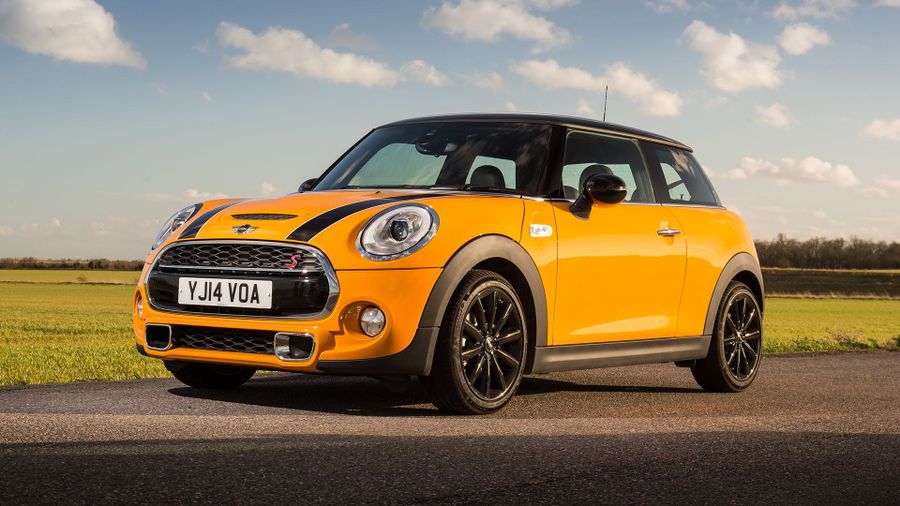 The design cues from the 1960s original have continued on this third-generation, BMW-built Mini like a rich thread of heritage, albeit in a chunkier, bloated kind of a way. The hexagonal grille, ‘floating’ roof, upright windscreen, chrome door handles and round, gooey headlights are all present and correct, though the latest round of crash-safety regulations are making it increasingly difficult to maintain the Mini’s traditional ‘wheel-at-each-corner’ stance. Still, as small cars go, the Mini remains one of the most cheeky, instantly recognisable and undeniably modern silhouettes out there. The Hatch comes in three or five-door forms and all models from the entry-level One upwards get alloy wheels as standard, although a range of other fancy wheel designs are available as options. Moonwalk Grey paint is included, but any other colour will cost you extra. You can also opt for some painted or chromed side mirrors, and bonnet stripes in black or white. 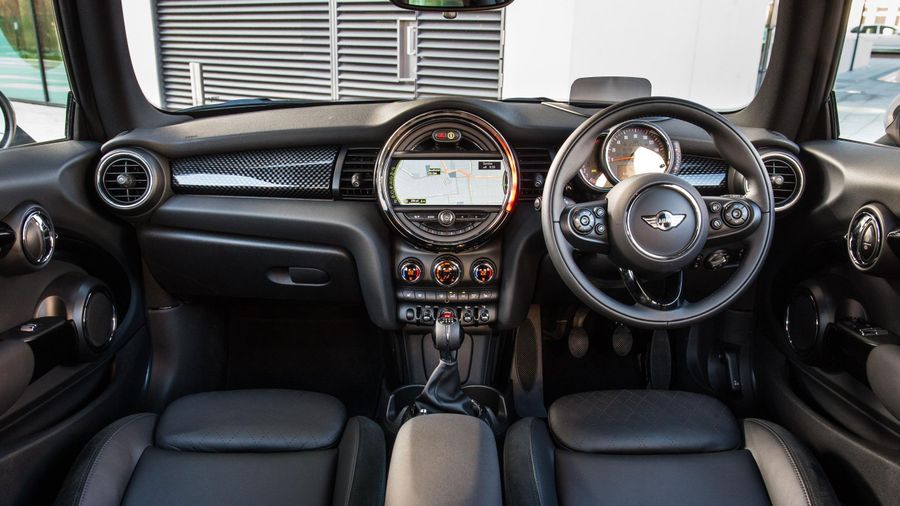 When it comes to small-car interiors, choice, quality and texture matter. Mini understands this and has presented a cabin that’s brimming with character. The soft-touch dashboard feels high in quality and can be specced in a variety of colours, while the colour of the interior lighting can be changed on the move to alter the cabin’s ambience. Plus, items like the chrome toggle switches and plectrum-shaped starter button cleverly combine the ornamental with the useful. Ergonomics are good, too, with a large circular console housing the infotainment system, a paired speedo and rev counter arrangement mounted above the steering wheel and the buttons for the electric windows and lights being placed in intuitive locations. There are still a few idiosyncrasies, though; the dial controller for the optional infotainment system is positioned next to the handbrake and so requires nimble fingers, while the fog light buttons are positioned out of view beneath the steering wheel.

Practicality is not a strong point of the Mini Hatch. Although the space up front feels surprisingly generous, accessing the rear pair of chairs on the three-door model requires the deft precision of a small circus performer. Once you’re in, though, the space you get isn’t too bad at all. The same cannot be said of the minuscule 211-litre boot, which is about as useful as a tape player. Remove the false floor, and you’ll be able to squeeze two items of carry-on cabin luggage in there, plus a handbag. That’s without a spare wheel which, annoyingly, isn’t even an option. That said, the rear chairs fold flat with a 60:40 split and the front passenger seat is Isofix appointed, making it easy to install a child car seat. Five-door models get a slightly larger boot, at 278 litres, although it’s still far from cavernous. 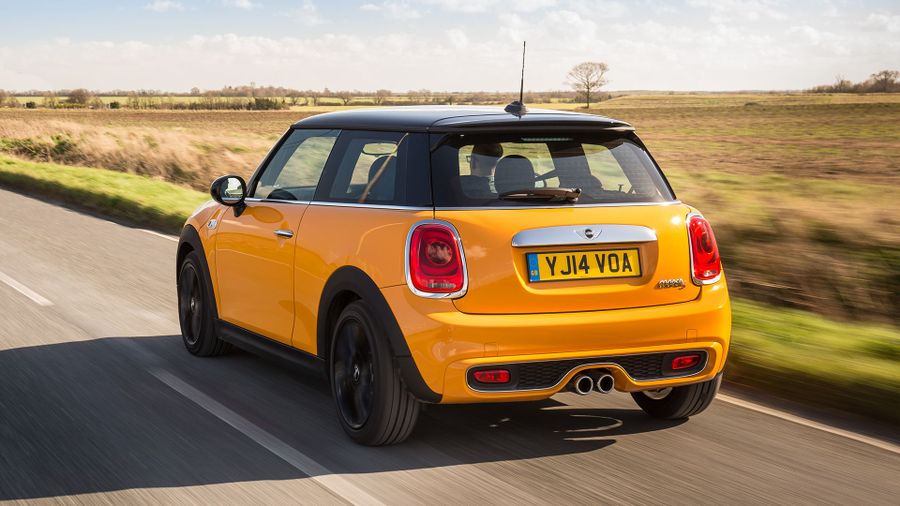 So far we’ve tested the range-topping Cooper S and Cooper D, with both versions offering the fun, playful handling characteristics that are synonymous with the Mini brand, albeit with an unexpected layer of maturity. The Cooper D demonstrates fine body control through corners and maintains an impressive level of cabin refinement over all manner of road surfaces. The stiffer Cooper S may be a bit bumpier at slower speeds, but things settle down a lot more at higher speeds, making it a surprisingly stable and comfortable long distance companion, while still being great fun in the twisties. There’s also the option of an adaptive suspension that lets you soften things off when you’re in the mood for comfort rather than fun.

So far, we’ve tried the most powerful Cooper S petrol and the diesel-powered Cooper D and Cooper SD cars. The 2.0-litre S delivers 192 horsepower, and it gives the car every ounce of fizz-factor that we’ve come to expect from S-designated Minis, because acceleration is strong, smooth and readily available. There’s even more sparkle when you select the ‘Sport’ driving mode due to sharper throttle responses, and you’re also treated to a slightly meaner temperament, including a few pops and bangs from the exhaust. The Cooper SD, however, isn’t so appealing. Yes, it makes the car fairly fast, but the power delivery doesn’t have that frenetic, always-up-for-it nature that’s essential in a Mini, and it’s pretty noisy, too. The less powerful Cooper D, on the other hand, is an absolute peach. It only produces 150 horsepower, but it’s flexible, free-revving, creamy smooth and impressively hushed. What’s more, it pulls really strongly and feels a whole lot more powerful than its relatively modest output suggests.
Fans of automatic gearboxes can specify a seven-speed twin-clutch with the more modest versions, while the more powerful ones can be had with an eight-speeder. Both could be smoother (the former is better than the latter on that score) and have a strange reluctance to change down as you pull up to a standstill, causing some shudders through the car, but otherwise, they swap around their gears quickly and effectively. Even so, unless you really can’t bear the thought of pumping a clutch pedal, we’d stick with sweet-shifting manual six-speeder; its short-throw-action and precise weighting are beautifully synchronised and wonderfully engaging. 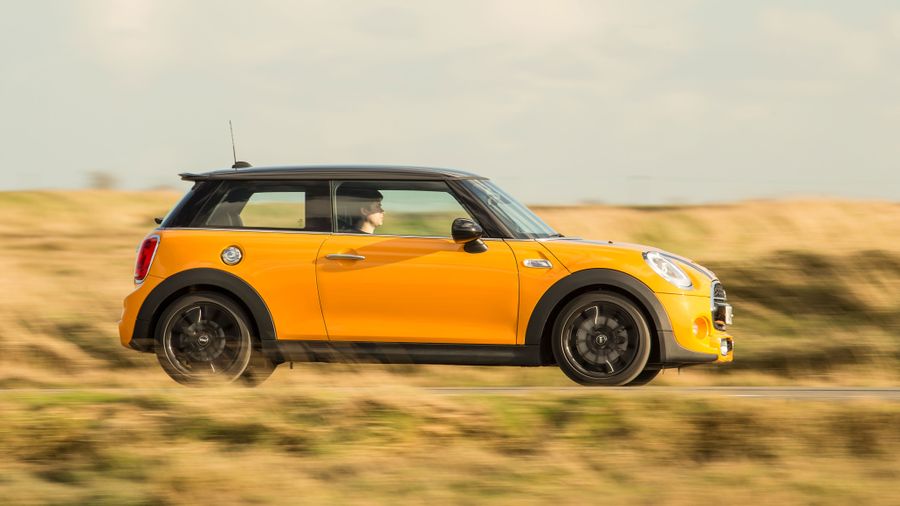 The Mini Hatch is expensive to buy, but it also has some of the best residual values in class, which will help safeguard your initial investment. If other running costs are your key priority, the Cooper D is a great choice. Despite its very perky performance, it has a claimed fuel economy of 80.7mpg and a CO2 output of 92g/km – much lower than an equivalent Audi A1 or Citroen DS3. However, the petrol-powered Cooper offers the best balance of performance and economy, with 62.8mpg and CO2 emissions of 105g/km.

Look at the reliability data on previous Minis, and the chances are you’ll be pretty underwhelmed. Scores for most of the previous versions have been a bit lower than average according to Warranty Direct’s Reliability Index, as has the score for the Mini brand as a whole. We’d recommend you take Mini up on the offer of the Mini TLC servicing packages (the vast majority of buyers do), which covers the first few years of servicing for a nominal one-off fee. 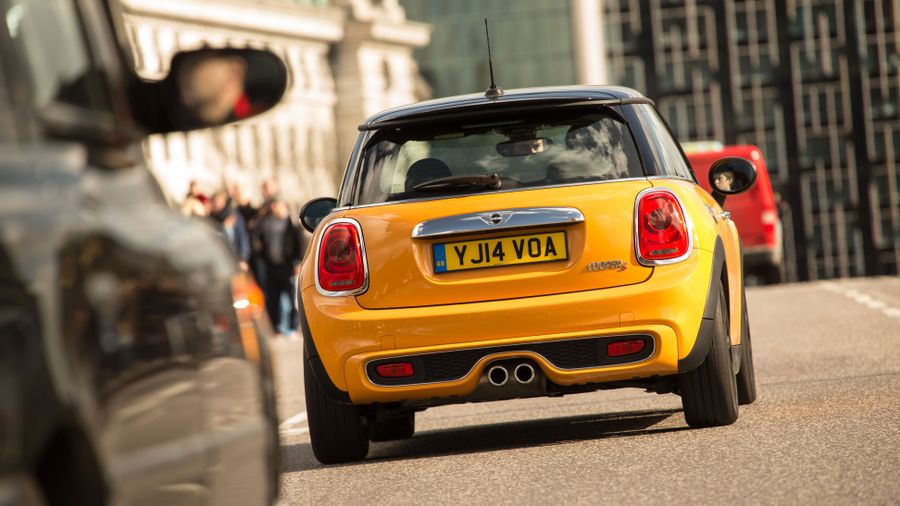 Six airbags, stability control and anti-lock brakes with electronic brake force distribution and cornering brake control are all standard fit. Running through the options list, we’d nominate the brilliant heads-up display – a function normally associated with much bigger cars – but pass on park assist and the reversing camera. The Mini scored four stars when it was tested by Euro NCAP, which is a touch disappointing when the Audi A1 scored the maximum of five.

The first BMW Mini of 2001 helped pioneer the trend for customisation, and third time round, there remains a near limitless number of options, from bonnet decals to downloadable Apps via the Mini Connected service. Be prepared though; you’ll have to shell out extra for many of them, often in the form of Packs that bundle different options together. Standard equipment includes air-conditioning, keyless start, Bluetooth, DAB radio and a USB socket. We’d also recommend that Cooper customers upgrade from the standard 15-inch alloys to some bigger, blingier items, and we’d also recommend the 20GB music hard drive so you can ditch the CDs and help free up some much-needed cabin space. The Cooper S, meanwhile, gets sports seats, a sports leather steering wheel and 16-inch alloys as standard. 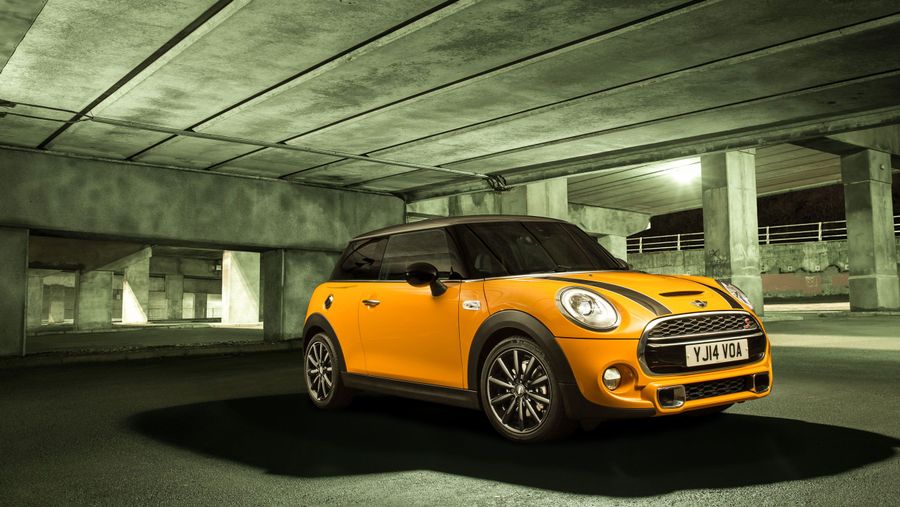 Look beyond the hype, and you’ll discover a car that’s great to drive and has plenty of substance to back up the style. You don’t measure desirability in boot capacity, and for the Mini, that’s just as well.