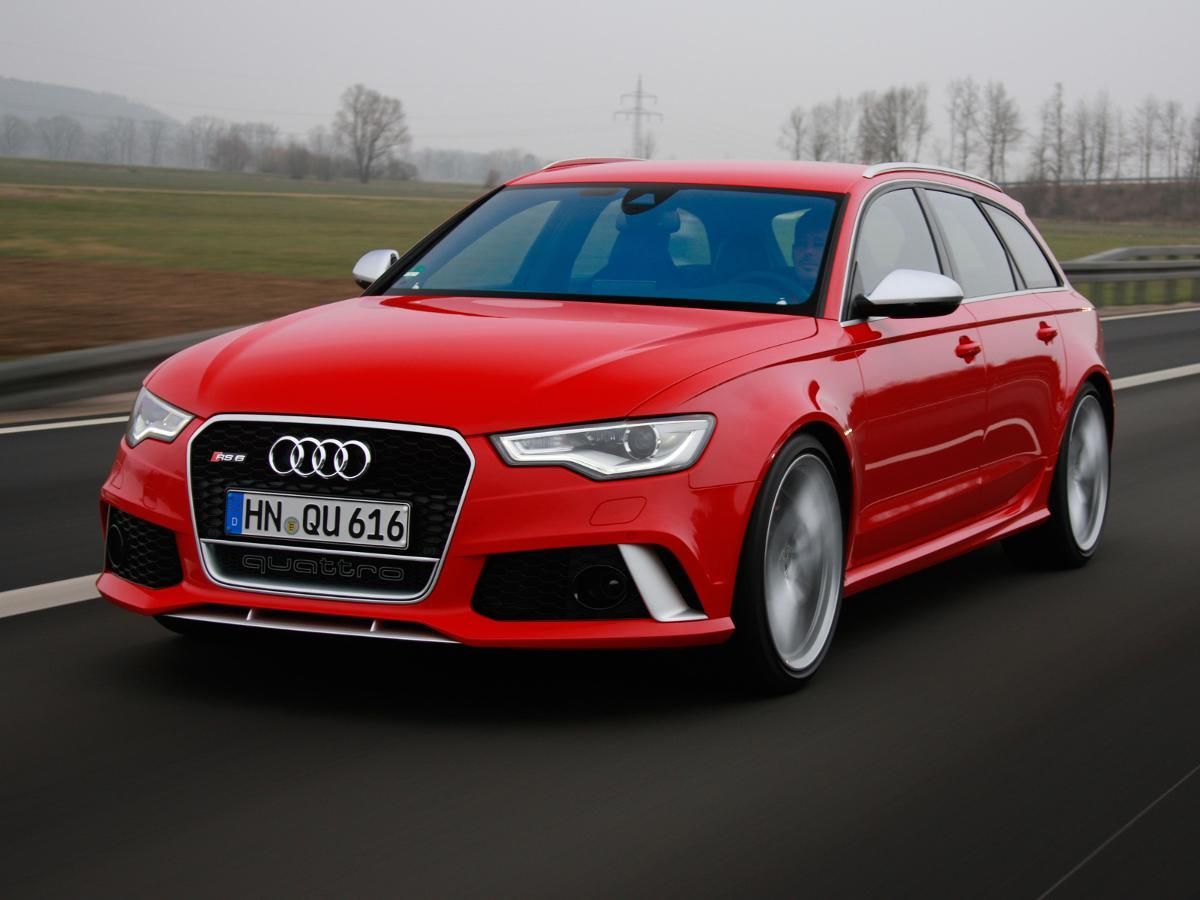 If you long for supercar pace, but you can’t make do with two seats and a tiny boot, then the Audi RS6 could well be the car for you. It may be a sensible executive estate with five seats and an enormous loadbay, but the performance it provides is anything but sensible.

At first glance, you could easily miss the potential potency of the fire-breathing Audi RS6. The various sporting touches make this performance flagship look a little more purposeful than your average A6 Avant, but it still looks ordinary enough that you can take other motorists by surprise with your pace. Many buyers love this kind of stealth-supercar, and the RS6 plays the role brilliantly.

The RS6’s interior is pretty much what you’d expect. The assortment of sporty trims and badges set it apart from the rest of the A6 range, but the regular A6’s sumptuous materials and sensational fit and finish remain. This is one seriously classy car. The dashboard is free from clutter thanks to the menu-driven infotainment system, which is very easy to use. There’s also bags of adjustment for your driving position, and a good view out in all directions.

The RS6 has generous interior space, making things feel luxurious for four adults and allowing five to sit in relative comfort. The huge, well-shaped boot will cope with pretty much anything a family can throw at it, and there are all sorts of hooks and nets to make the space even more versatile. Drop the rear seats, and the 565-litre loadspace extends to a whopping 1680 litres.

The RS6 comes with adaptive air suspension as standard, but the cars we’ve driven have all had the chassis-enhancing steel springs and adaptive shock absorbers. With this set-up, the RS6 changes direction well for such a big, heavy car; body movements are tightly controlled; and, there are staggering amounts of grip and traction. The four-wheel-drive system sends most of the drive to the rear wheels under normal circumstances, too, which helps the car’s agility further. The steering ruins things, though. It feels horribly artificial, and, depending on which driving mode you select, the weighting is either too light or too heavy. Turn the wheel beyond the straight-ahead position, and the steering also becomes too responsive for its own good, making the car feel unnervingly twitchy in bends. With the sportiest driving mode selected, the ride is also way too hard and unsettled and is obviously tuned for high-speed autobahn use rather than UK roads. Things are more comfortable in the less hardcore settings, but a good deal of shuffle and bounce is still all too prevalent on undulating B-roads.

Under the bonnet of the RS6 lies a thumping great twin-turbocharged 4.0-litre V8 packing a massive 552bhp and 516lb/ft of Tarmac-torturing torque that’s available from only 1750rpm. Just as well, then, that the RS6 has permanent four-wheel-drive to help lay all that power down; and, if you give it absolute death away from the mark, you’ll launch past 62mph in just 3.9 seconds. If that’s not sufficient to elevate your eyebrows, then the RS6 Plus ups the ante to 596bhp and shaves another two tenths off the 0-62mph time.

In either guise, it’s the way the car unfurls its awesome power that really gets to you. There are no surges or peaks in the power delivery; it just pulls like a beast from the bottom of the rev range and keeps on pulling at the same epic rate all the way to the red line. This searing build-up of revs can actually catch you out if you choose to change gear via the steering wheel-mounted paddles, because you need to be pretty quick with your shift fingers to avoid banging into the rev limiter and stymying the acceleration. To be honest, you’re better off leaving everything in full-auto mode, which will enable you to delight in the raucous twin-exhaust blat, as the ratios are dispatched in double-quick time.

Top speed is electronically limited to 155mph, but if Germany is your ultimate destination, you can add one of two optional packages that’ll increase the figure to either 174mph or 189mph.

With prices starting upwards of £75,000, the RS6 is one expensive estate car. Then again, that’s pretty much spot on with what you’ll pay for its only real rival, the Mercedes E63 AMG Estate, which isn’t as fast as the RS6. The Audi is also a shade leaner on fuel than the Merc, with an official average of 28.8mpg. That’s largely thanks to the engine, which shuts down four of its eight cylinders under light loads to conserve fuel. Resale values are pretty strong in percentage terms, but with such a high price, depreciation losses will still be heavy.

The fit and finish inside the RS6 demonstrates that it’s been built with fastidious attention to detail, and that will give you confidence that it’s been engineered and assembled properly. However, Audi currently sits near the bottom of Warranty Direct’s manufacturer standings for reliability, and if something does go wrong, putting it right will be expensive.

The RS6 hasn’t been crash tested by EuroNCAP, but the A6 saloon on which it’s based scored the full five-star rating. The four-wheel drive system should help prevent you avoid trouble, and so will the standard stability control. If trouble can’t be avoided, there are six airbags to protect you.

The RS6 comes with a long list of standard luxury equipment, as it should when you’re paying so much cash. It includes cruise control, four-zone climate control, electrically-adjustable leather sports seats, a powered tailgate, parking sensors and an intuitive infotainment system that includes sat-nav, Bluetooth, a DAB radio. You can also add all manner of exotic options that can easily take the price of your car into six figures.

If you have a family and a dog that you want to transport a very long way in a short amount of time, the RS6 is the perfect tool. It doesn’t have the supercar handling to match its supercar pace, but it’s still wonderfully refined, effortlessly practical and super-sophisticated to sit in. 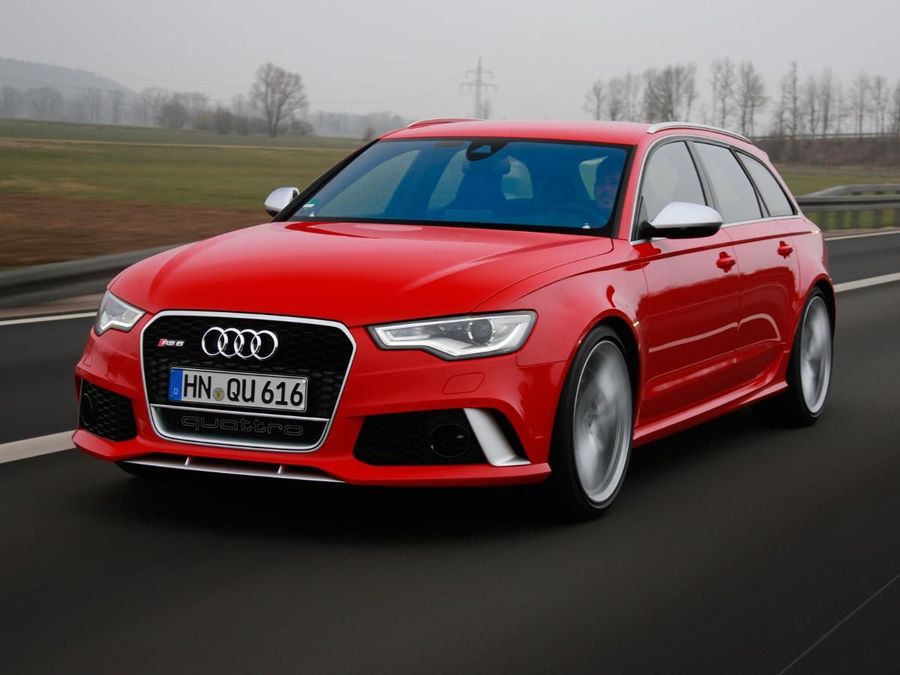